Accessibility links
Not My Job: We Quiz The Mayor Of South Bend, Ind. About North Bend, Wash. Pete Buttigieg is a Harvard graduate, a Rhodes scholar, an Afghanistan veteran and the millennial mayor of an Indiana city. We ask him three questions — about a small town in Washington state. 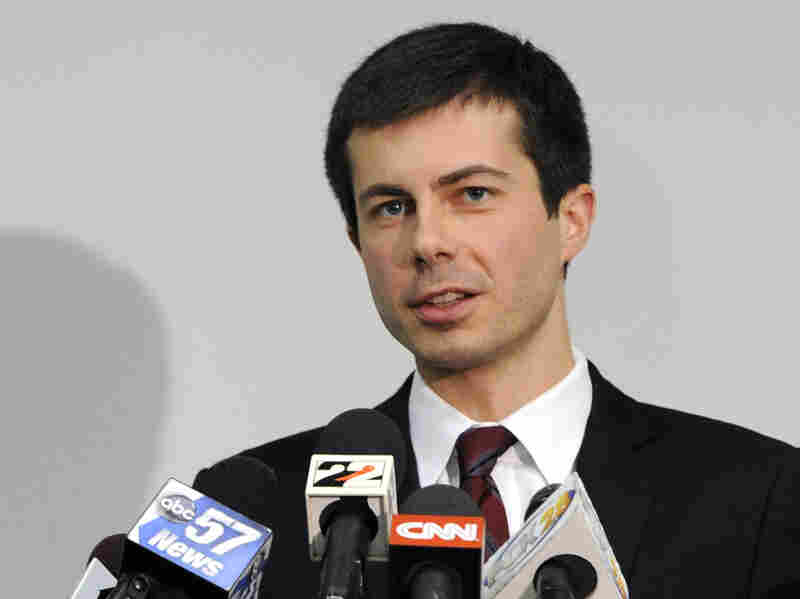 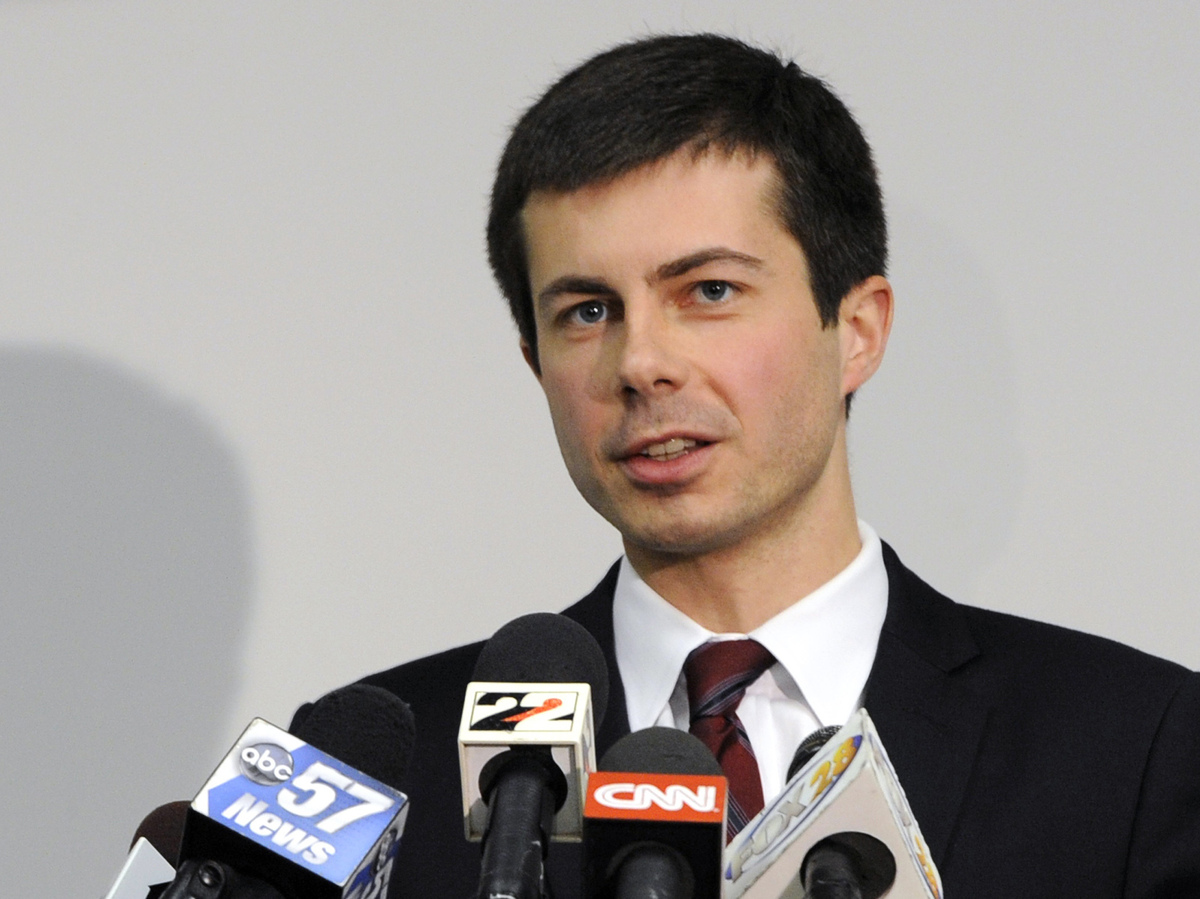 Pete Buttigieg is a Harvard graduate, a Rhodes scholar, a veteran who served in Afghanistan and a millennial. But he took his talents back to South Bend, Ind. — his hometown — where he ran for mayor and won. He's now serving his second term in office.

He's been South Bend's biggest booster, so naturally, we decided to ask him three questions about the town of North Bend, Wash.

An Indiana Mayor On The Way Forward For Democrats

And now the game where we try to surprise surprising people with something that shouldn't be a surprise. It's called Not My Job. So Pete Buttigieg is a Harvard graduate, a Rhodes scholar, an Afghanistan Army vet - the kind of person his hometown of South Bend would both be very proud of and only see when he visits his parents.

SAGAL: Normally. But instead of hanging around in some big city telling amusing stories about his Midwestern roots, he came back, ran for mayor, won and is now serving his second term. Mayor Pete Buttigieg, welcome to WAIT WAIT... DON'T TELL ME.

SAGAL: You were elected mayor at the age of 27, which made you the youngest mayor of a city above a hundred thousand people in the country.

SAGAL: Excuse me, excuse me.

BUTTIGIEG: Youngest mayor. Of course, that's a record that you only stand to lose. So...

BUTTIGIEG: ...I held it for a time. And then somebody sent me a message on Twitter saying, hey, you can't keep calling yourself the youngest mayor of a city over a hundred thousand. I've got you beat.

SAGAL: Damn. Was there skepticism? Like, you're 29 years old. What the hell do you know about being a mayor?

BUTTIGIEG: Yeah. Sometimes door-to-door, somebody would say, you know, I've got underwear older than you or something like that.

SAGAL: You're known as a South Bend booster, right? You know this.

SAGAL: Pandering - you can't just gesture to the people.

HARI KONDABOLU: That is some quality pandering. So how old are you now, out of curiosity?

BUTTIGIEG: Old enough I've got to think about it for a second. I'm 36.

KONDABOLU: But I'm 35, and I haven't done anything.

KONDABOLU: Like, my parents aren't here, but I feel like they felt a little burn right now.

KONDABOLU: All the way in New York, the second-greatest city in the world.

SAGAL: Is it - now you were, like, headed for - I mean, you were maybe in finance or something like that with your background. Did your friends say - oh, I'm going back to South Bend. I'm going run for mayor - did they think you were crazy?

BUTTIGIEG: Yeah. When I moved home, I remember I was getting a beer with some folks, and I said I was moving home to South Bend. They were like, oh, do you have a relative who's ill?

BUTTIGIEG: No, Mom and Dad are great. I just want to go home. It's a great city, and I want to live there. It's a community that really - you get out of it what you put into it.

SAGAL: Right. What does that mean?

SAGAL: Wait a minute. Hold on. Were you describing the lifestyle or the sewer system? I have no - what...

BUTTIGIEG: Are you aware that we have the smartest sewer system in the world?

BUTTIGIEG: That's a fact. We have the most densely sensored network of sewers anywhere in the world. Smart water technology is actually...

SAGAL: But by sensored, you don't mean, don't say that. You mean that as...

SAGAL: How dare you? You mean sensors.

BUTTIGIEG: Yeah, yeah, no. We have these Wi-Fi-enabled sensors all through the system. They let us manage the flow, route things where it's supposed to go, mitigates flows going into the river. If you're involved in...

SAGAL: It's like, oh, God, the Harrisons had burrito night again.

SAGAL: So I got to talk to you about your ambitions. You're a rising star in the Democratic Party. You ran for Democratic chair earlier last year. So...

BUTTIGIEG: No, I. Mean, I have the best job in the world and just try to keep my head down, do a good job.

BUTTIGIEG: I got plenty to keep me busy.

SAGAL: Does it worry you that nobody with a funny name like yours could ever get elected president?

BUTTIGIEG: Around here, it's actually an asset. You know, this is a community - you know, a lot of East European settlement here in South Bend. We got one guy - Czysz (ph) is his name - he ran for office recently. Not one vowel in his entire name.

SAGAL: OK. Well, Mayor Pete, we have invited you here to play a game we're calling...

SAGAL: So as we know, you are the biggest booster of South Bend. But what do you know about the town's arch nemesis, North Bend, Wash.?

SAGAL: Answer these three questions, and you will not only win our prize for a listener, you'll also get to wipe the town of North Bend off the map...

SAGAL: ...Bringing the Great War of the Bends to a close. Bill, who is Mayor Pete playing for?

SAGAL: First question - in 2013, the North Bend Fire Department made the news when they did which of these? A, attempted to rescue a cat stranded in a tree but the cat turned out to be a rabid raccoon and eight firefighters had to get vaccinated; B, a reporter discovered that the station's beloved dalmatian was just a white greyhound with a skin condition...

SAGAL: ...Or C, they accidentally pumped jet fuel instead of water onto a training fire, causing a gigantic fireball.

BUTTIGIEG: You know, we have an outstanding fire training center here in South Bend.

BUTTIGIEG: And I can see how - I mean, it's magnificent. You should see it.

BUTTIGIEG: And I can see how if you didn't, there might be issues with which fluid goes in which pumps, so I'm going to go with C.

SAGAL: You're right. That's what happened.

SAGAL: And by the way, you were right. What happened was is the fuel got into the line that they use for recycling the water for their next training exercise, and (imitates explosion).

North Bend's true claim to fame is that it was the setting for David Lynch's TV series "Twin Peaks." During the filming of the original show back in the late '80s and '90s, one of the producers got an excited call telling him what? A, the National Apple Growers Association was offering a cool million to switch agent Cooper's favorite kind of pie; B, Jerry Falwell had announced that the title "Twin Peaks" was too salacious for today's youth...

SAGAL: ...Or C, Soviet Premier Mikhail Gorbachev had to know who the murderer was right away?

SAGAL: Is there such a thing as too smart? Because you're right again. That's what happened.

SAGAL: The call to the producer came from a financier who had heard from his friend, President George H.W. Bush, that George - that Mikhail Gorbachev had to know the solution to the mystery right away. It is unclear, though, if Gorbachev got his answer.

Last question - North Bend is home to Nintendo's main factory and distribution center, and Nintendo Director Shigeru Miyamoto has spent time in this town where people have observed him pursuing his favorite hobby. What is it? A, leaping on mushrooms hoping that one day he'll be launched into the air...

SAGAL: ...B, pulling out a tape measure and measuring everything he comes across; or C, finding kids playing a Nintendo DS, taking it and immediately beating their high score?

BUTTIGIEG: I'm going to go with B, the tape measure - Sounds like just the kind of hobby that a great video game designer would have.

SAGAL: He's obsessed. Mr. Miyamoto is obsessed with measuring things. He likes to guess their size and then pull out his tape measure and measure it. That's what he does for fun.

Bill, how did Mayor Pete Buttigieg do on our show?

KURTIS: With those three right answers, I smell re-election.

SAGAL: Pete Buttigieg is the mayor of South Bend, Ind. Mayor Pete, thank you so much for joining us.

THE WACO BROTHERS: (Singing) Got a call last month from an old friend. They said they're hiring on the road in old South Bend.

SAGAL: In just a minute, Bill becomes a headbanger in the Listener Limerick Challenge. Call 1-888-WAITWAIT to join us on the air. We'll be back in a minute with more of WAIT WAIT... DON'T TELL ME from NPR.