Accessibility links
Chief Of Staff Finds Himself In The Spotlight And Not In A Good Way The White House is dealing with the fallout of domestic abuse allegations against now-former staff secretary Rob Porter. The focus now is on chief of staff John Kelly, who came to Porter's defense. 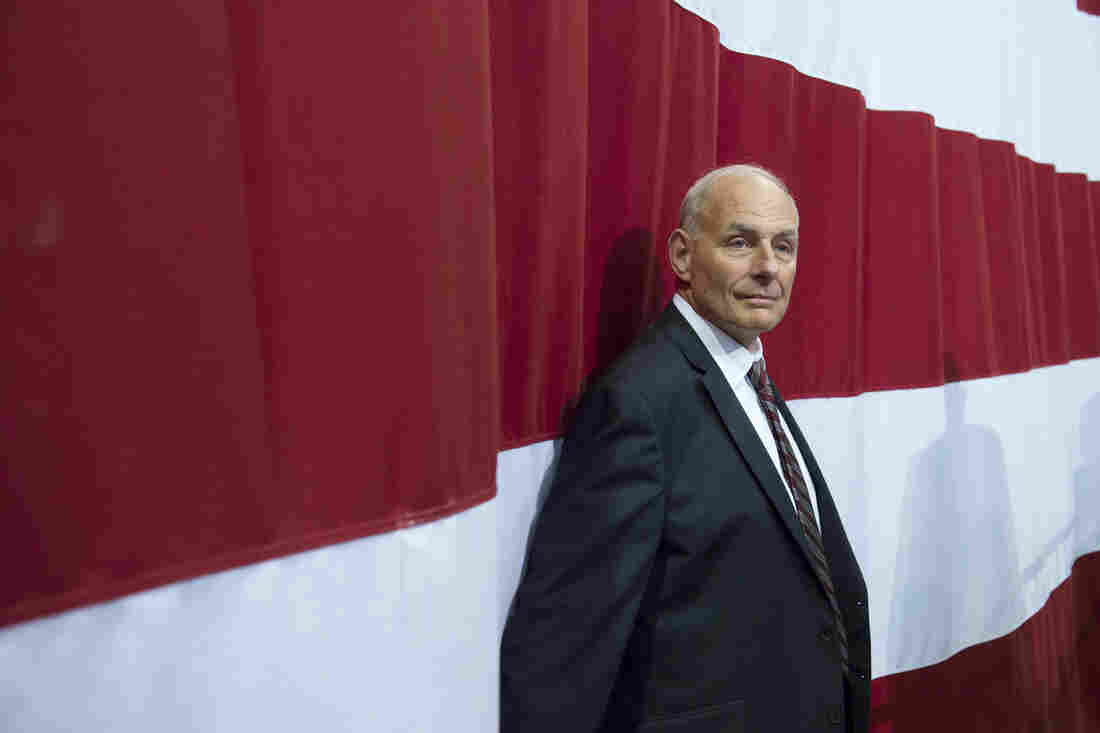 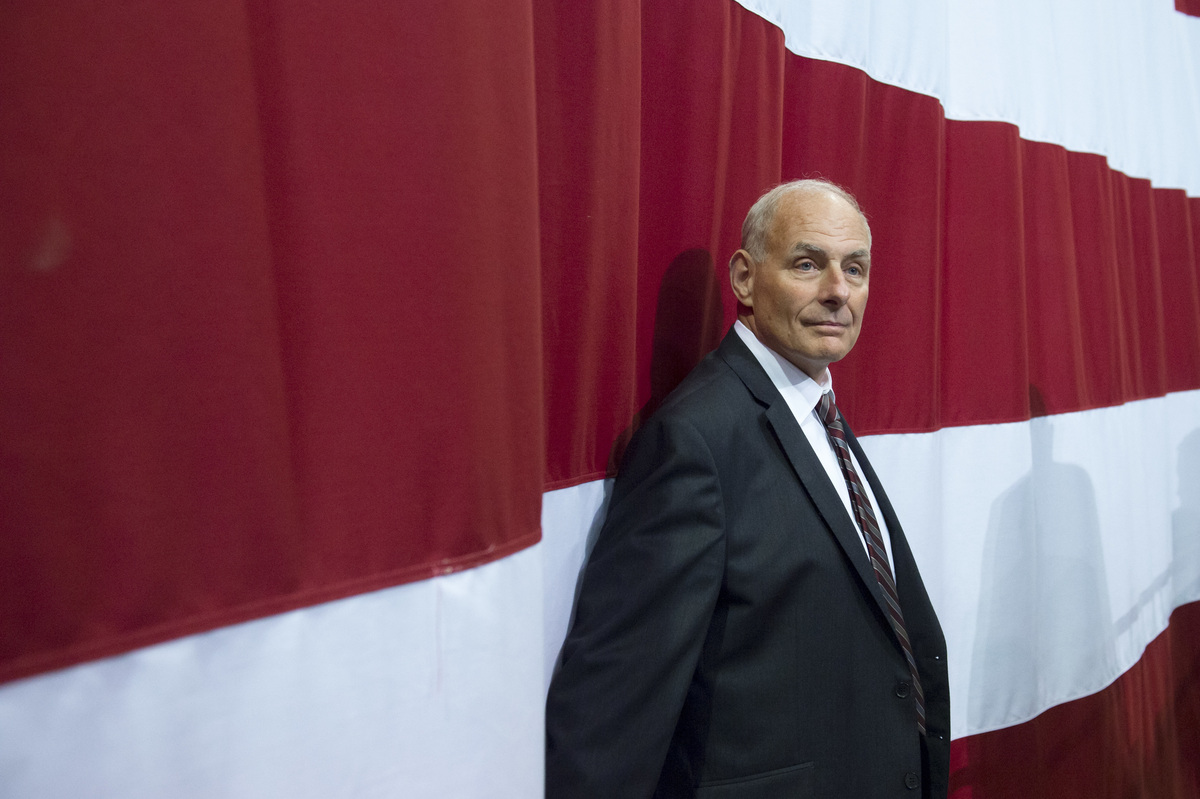 White House chief of staff John Kelly listens as President Trump speaks during a rally in Huntington, W.Va. on August 3, 2017.

It didn't take long for attention to turn from the resignation of former White House staff secretary Rob Porter to scrutiny of how chief of staff John Kelly handled the allegations of spousal abuse lodged against his close aide.

And as a chief of staff, that spotlight is not where you want to be.

"Frankly, the last thing you can afford to do as chief of staff to the president is become the headline rather than the person working in the background," said Leon Panetta, a White House chief of staff in the Clinton administration who also knows Kelly well.

That is true in every White House, but may well be even more true in the Trump White House, where the president is known to chafe at aides who get more attention than he does or draw negative headlines in his direction.

Another thing that's less than ideal: having a White House spokesman have to go on the record denying that the chief of staff offered his resignation, or expressed a willingness to resign. That's what happened on Friday in a flurry of rumors about Kelly's standing with Trump.

The mounting days of bad press about the handling of Porter — who knew what and when, the problem with his security clearance — are just the latest in a series of instances of Kelly drawing the wrong kind of attention.

And it's causing people to rethink the one overriding piece of conventional wisdom about Kelly, the retired four-star Marine general and former Homeland Security secretary who came into the White House after a chaotic period of backbiting and staff turnover.

He initially thought Kelly was someone he could work with on immigration issues. He said Kelly presented himself as an ally within the administration. Lately, Gutierrez has been questioning who Kelly really is.

When Kelly became chief of staff, he said he saw his job as managing the staff, not President Trump or his Twitter feed. But in the case of Porter, it was Kelly's management of the staff that is in question.

After Aides Accused of Domestic Abuse Resign, Trump Says 'Lives Are Being Shattered'

The Porter story first broke Tuesday night in the British tabloid the Daily Mail, which reported that his two ex-wives had accused him of mental and physical abuse. The initial reaction of the White House was to defend Porter, who under Kelly had taken on an increasingly important role in the Trump White House. He was the man tasked with controlling the flow of information into the Oval Office. He often traveled with the president and was involved in crafting the State of the Union address.

Kelly, in a statement Tuesday praised Porter, saying he was "a man of true integrity and honor," Kelly told the Daily Mail. "I can't say enough good things about him. He is a friend, a confidante and a trusted professional."

Porter denies the allegations and in a statement released Wednesday described it as part of a "smear campaign."

Wednesday, photos of Porter's first wife with a black eye came out, and Porter resigned. Still, the White House and Kelly stood by him, with White House press secretary Sarah Sanders insisting he hadn't been pushed out.

"The president and chief of staff have had full confidence and trust in his abilities and performance," Sanders read from the podium in the press briefing room.

It was only late Wednesday that the White House released a new statement from Kelly.

"I was shocked by the new allegations released today against Rob Porter. There is no place for domestic violence in our society. I stand by my previous comments of the Rob Porter that I have come to know since becoming Chief of Staff, and believe every individual deserves the right to defend their reputation," the statement from Kelly said.

Come Thursday, White House spokesman Raj Shah admitted the White House could have done a better job of dealing with the situation.

It has been widely reported that Kelly had long been aware that there were abuse allegations against Porter. His permanent security clearance had been held up over them. But it wasn't until those allegations went public that any action was taken.

"I worry about John," said Panetta in an interview with NPR. "Because look, he is first and foremost a Marine. He is not a politician."

Panetta said the mistakes of the last several days may be something a general could get away with. But now Kelly is the White House chief of staff.

"You've got to have political judgment and you've got to think ahead as to what can happen that could damage the president and, for whatever reason, that didn't happen here and he's now going to pay a price for that," said Panetta.

It's not clear what that price will be, if any. As of Thursday, Shah insisted President Trump continues to have full confidence in Kelly. But numerous news outlets were reporting that the president was privately venting about his chief of staff.

This all came in the same week that Kelly used crude and racially insensitive language to describe immigrants eligible for the Deferred Action For Childhood Arrivals (DACA) program but who hadn't applied for the program's protections.

"...[P]eople that some would say were too afraid to sign up. Others would say were too lazy to get off their asses but they didn't sign up," Kelly said to reporters Tuesday as he discussed the White House offer of a path to citizenship for an estimated 1.8 million people eligible for the DACA program as part of a larger immigration system overhaul.

Later the same day Kelly suggested some of them "just should have probably gotten off the couch and signed up."

This caused massive backlash from congressional Democrats, and again made Kelly the story.

For Gutierrez this was both deeply offensive and something of a last straw.

"You can read a book, you can read the public policy, you can get educated," Gutierrez said. "It's really hard to get a heart."

"Evolved" on the wall

Last month, Kelly ran afoul of President Trump when in a closed-door Congressional Hispanic Caucus meeting, and then later in an interview on Fox News he said the president's views on the border wall had "evolved."

"He has evolved in the way he's looked at things," Kelly said on Fox. "Campaigning to governing are two different things and this president has been very, very flexible in terms of what is within the realm of the possible."

The next morning Trump took to Twitter to rebut his chief of staff and get the last word.

The Wall is the Wall, it has never changed or evolved from the first day I conceived of it. Parts will be, of necessity, see through and it was never intended to be built in areas where there is natural protection such as mountains, wastelands or tough rivers or water.....

And then there was last fall, when Kelly came to the White House briefing room to defend President Trump. After a condolence call to the widow of a soldier, Trump was accused of being insensitive. Rep. Frederica Wilson, D-Fla., was in the car and overheard the call and was the main voice criticizing the president.

At first Kelly, who is a Gold Star father himself, described in painful detail the notification process for families of deceased troops. It was powerful and wrenching. Kelly explained how Trump may have repeated something Kelly had told him about his own experience and it inadvertently came out sounding different than intended.

But then, Kelly went further, going after Wilson and calling her an "empty barrel," as in empty barrels make the most noise. He described an event where he claimed she was inappropriately self-promotional.

The problem is, further reporting revealed that what Kelly described didn't happen. Kelly never apologized, even after it became clear his recollection wasn't accurate.