Accessibility links
Stock Market Swings May Rock More Minds Than Wallets Many consumers will watch to see where the market swings this week. Few take a direct financial hit when the markets fall, but that can still affect attitudes about the economy — and the president. 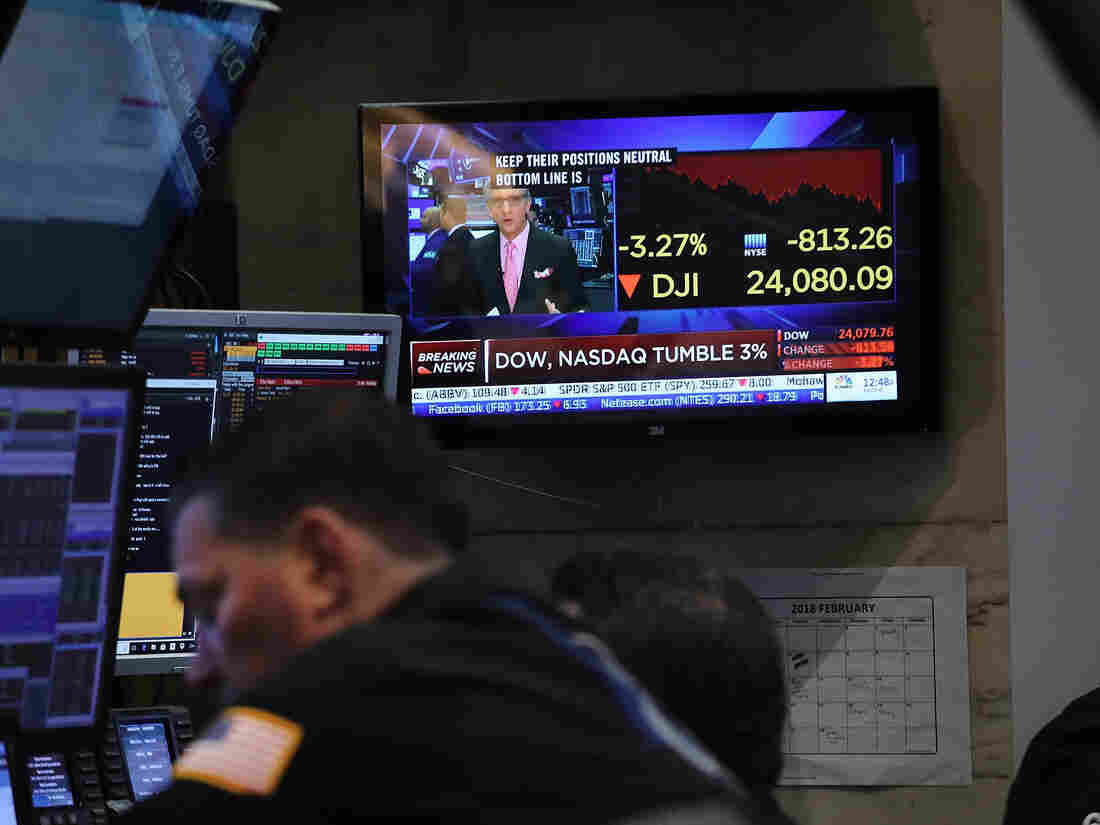 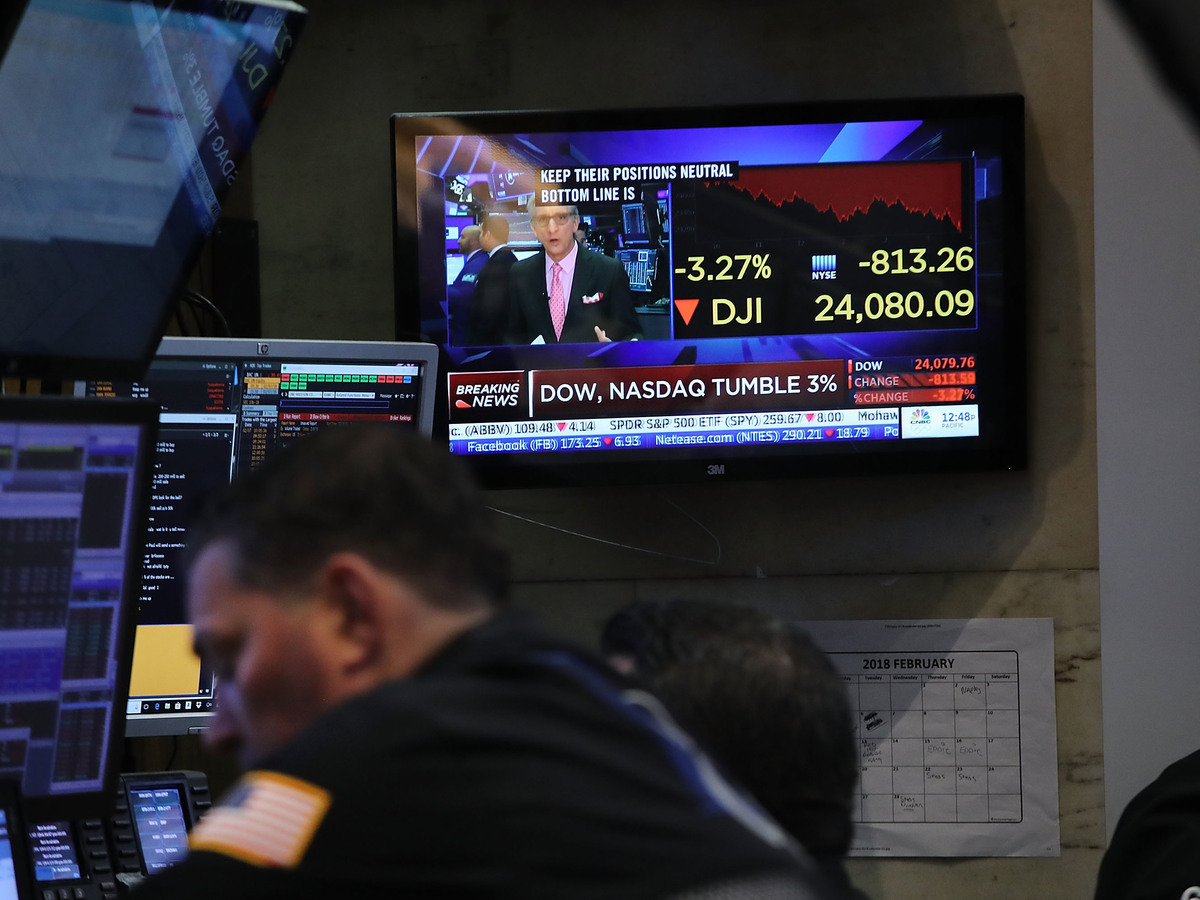 Traders work on the floor of the New York Stock Exchange moments before the Closing Bell on Feb. 8 in New York City.

The wild swings in the stock market in the last two weeks grabbed headlines and were hard to miss for most Americans.

But do those market gyrations actually affect anyone's day-to-day finances?

Relatively few Americans actively trade or own stocks. But a 10 percent drop in the markets can affect our attitudes about the economy, even for those who don't invest, says James Poterba, president of the National Bureau of Economic Research and an economist at the Massachusetts Institute of Technology.

When the stock market goes up, people typically spend more. Even if most of that spending is concentrated among people with high incomes, it still powers the economy. According to Poterba's research, every extra $1 of disposable income in your stock portfolio leads to about 2 to 3 cents in additional spending.

"It might also have a psychological effect," he added. "Even those who don't have much in the stock market feel that it's an indicator of how things are going."

So a major decline in the markets could precipitate a pullback in consumer spending if enough people are unnerved psychologically.

And despite President Trump's conflation of the stock markets with the overall well-being of the economy, just a small percentage of American households own stocks. Trump has made a habit of using the stock market and its incremental fluctuations as a sign of the overall economy's health.

"The most important thing to understand about stock ownership in the U.S. economy is that it is a very concentrated thing," said Poterba. "Many people hold no stock at all and have no exposure directly to the stock market."

Only 13.9 percent of U.S. families directly hold stocks, according to the most recent Survey of Consumer Finances from the Federal Reserve, and that number has been dropping year after year. If 401(k) retirement accounts and mutual funds are included, that number increases to 51.9 percent.

Still, that means roughly half of all American families do not invest in the markets in any fashion (separate polls from Gallup and the Census Bureau back up this data point).

Moreover, stock ownership is concentrated among the wealthy — 84 percent of all stocks are owned by the richest 10 percent of Americans. 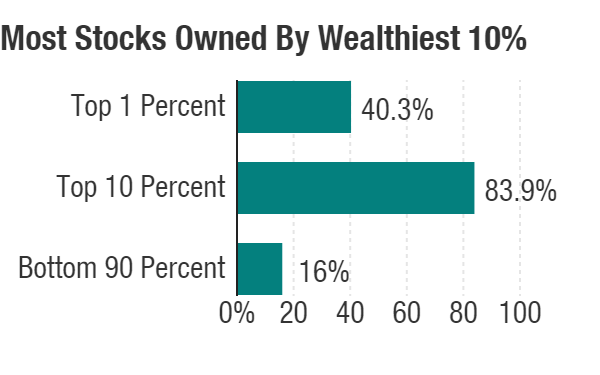 That number is actually a lot higher than it used to be according to Edward Wolff, an economist at New York University, who's written on the topic. "In 2001, for example, the richest 10 percent owned only 77 percent of all stocks," he said. 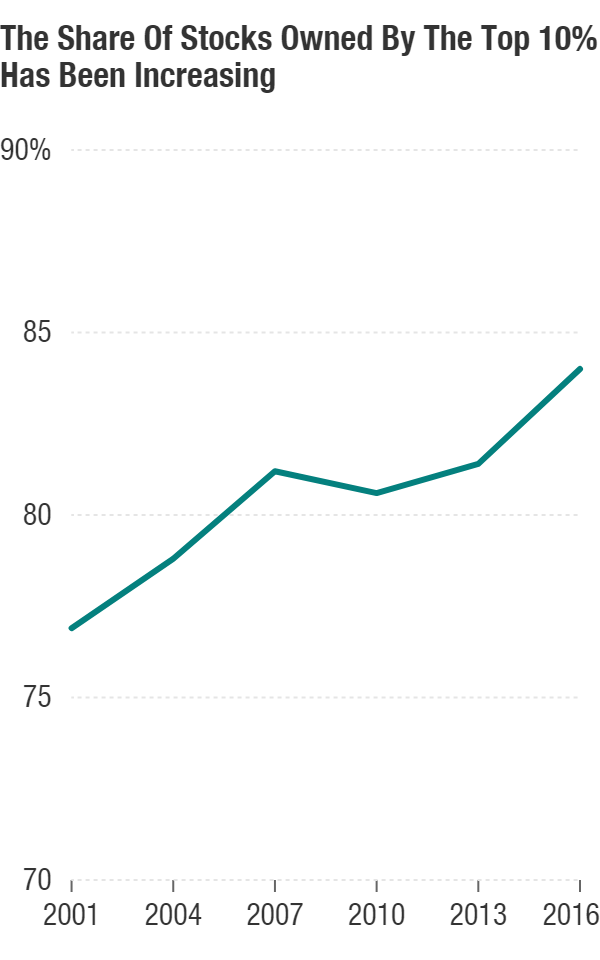 MIT's Poterba points out that even among those investing in the market, three-quarters of American families own less than $25,000.

Most people investing in the stock market are white, college-educated, urbanites, according to the Fed's survey. And, they're more likely to live in the Northeast. The Fed data also found that those under the age of 35 or in a single-parent household are less likely to invest.

As a comparison, the Fed survey shows that 61 percent of white families own stocks, compared to just 31 percent of black families and 28 percent of Hispanic families. 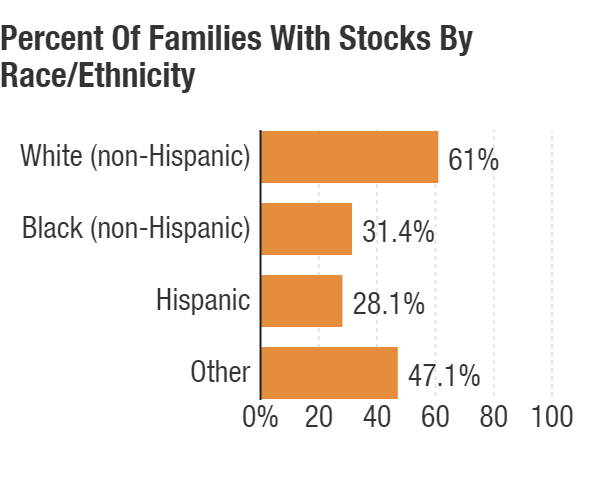 NYU's Wolff points out that age and racial stock market disparities are in line with overall wealth disparities, but it's also evidence that blacks, Latinos and young people don't invest in the market as much as their older white counterparts because they're putting their savings elsewhere.

"African-Americans and Latinos have fairly low stock ownership rates, and that's a reflection of the fact that most of their savings go into buying a home," said Wolff. He said young people, despite stories to the contrary, are also opting for a home over stocks.

So rich, college-educated whites are disproportionately investing in the market, as are foreigners. Steven Rosenthal of the Tax Policy Center estimates foreigners own about 35 percent of U.S. corporate stock.

During his first year in office, Trump has eagerly taken credit for the 20 percent increase in the Dow Jones industrial average since his inauguration.

The risk for Trump is that presidential approval ratings often decline when the economy hits a rough patch. Trump is already quite unpopular with large parts of the electorate, but his approval rating has started to tick up recently, as more Americans also give him credit for the good economy.

For most Americans who do dabble in the market, their investments are essentially retirement income, so except for those who are at or near retirement age, a one-day drop or two-week boom is unlikely to affect day-to-day finances. And that means for many people the immediate impact of a rocky market is mostly psychological. Still, for a president who's banked his economic reputation on the health of the stock market — another turbulent week could be a risk to his ratings.