Accessibility links
'Black Panther' Is A Superhero Story You Haven't Seen Before — And It's Thrilling Ryan Coogler's film, set largely in the richly imagined Afro-futurist utopia of Wakanda, is by turns intimate, immediate and — most importantly — new. 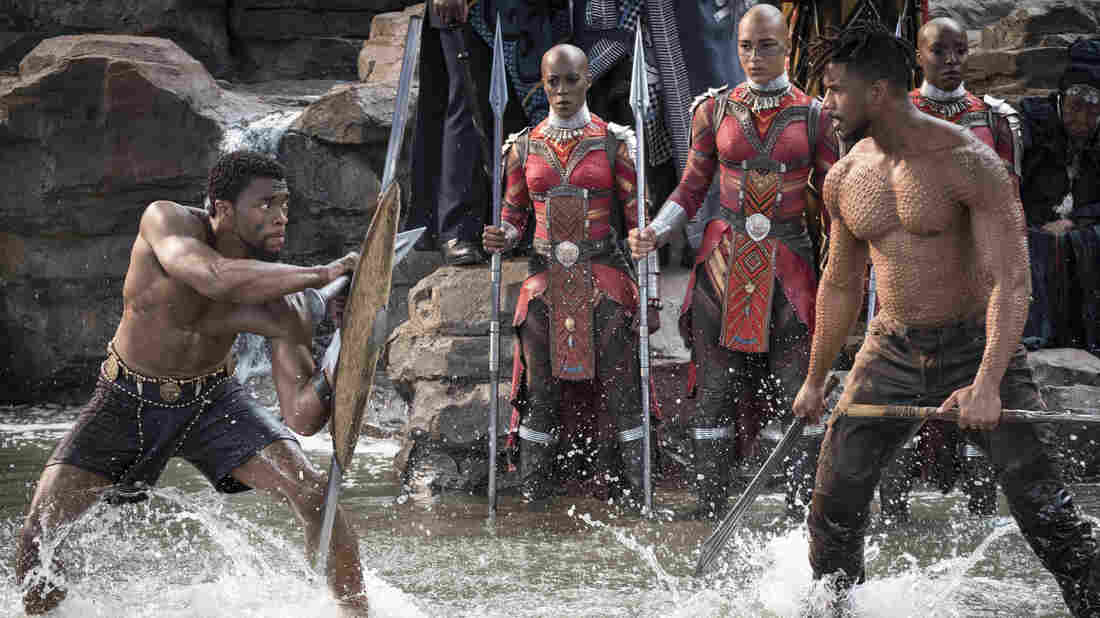 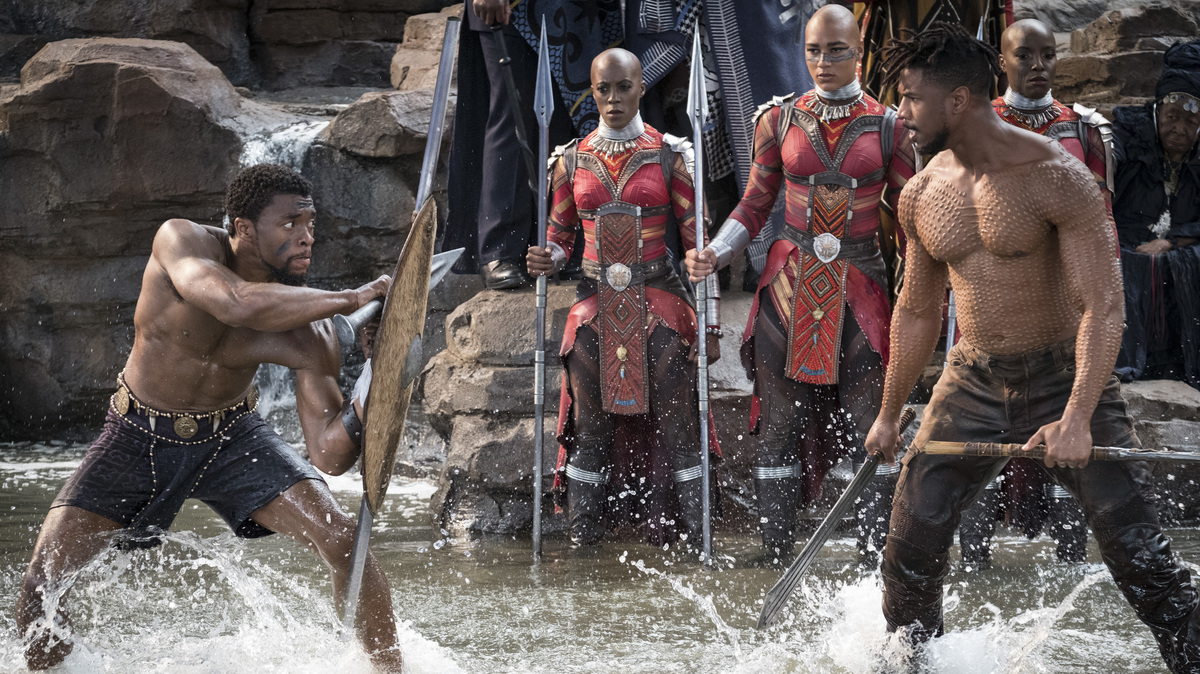 In 1938, Jerry Siegel and Joe Shuster — two Jewish kids from Cleveland who were reading the alarming news coming out of Europe — created precisely the hero necessary to put things right: an impossibly strong and nigh-invulnerable paragon of virtue and butt-kicking they called Superman. He could have ended Hitler's advance with a snap of his fingers — and he definitely would have, if only he weren't a creature of pure fantasy. Three years later, as the Nazi threat escalated, Joe Simon and Jack Kirby went a step further, summoning into being a hero who was essentially an American flag come to dynamic, Hitler-punching life. They called him Captain America, because subtlety is not what superhero comics are about.

There's a poignancy in the fact that these two heroes were products of grim necessity — a global menace threatened our way of life, and a nation gripped by fear and anxiety found in Superman and Captain America twin release valves. By indulging in the belief that someone big and strong and primary-colored could rescue them and beat the bad guy, Americans managed to steal a few moments of vicarious satisfaction.

There was a hole in the world, so they created heroes to fix it.

That same poignancy permeates Black Panther, which is Marvel Studio's 18th superhero movie, though it certainly doesn't feel like it. Ryan Coogler's third film is, happily, no by-the-numbers, big-budget hero narrative of the sort to which we've grown inured — it's by turns as intimate and immediate as 2013's Fruitvale Station and as stirring as 2015's Creed.

Chadwick Boseman is T'Challa, king of Wakanda, an unimaginably advanced, ruthlessly isolationist African nation that hides its riches and its tech from the world at large. Wakanda, as vividly and gorgeously realized here, is a soaring Afro-futurist utopia powered by the world's rarest, hardest and blue-glowiest metal, vibranium. (Fair warning: If one were to sneak a flask into a screening of Black Panther and drink every time any character says the word "vibranium," one would spend the film's final hour in the lobby having one's stomach pumped by a team of professionals.)

It's a credit to the production team that, even after 18 times at-bat, we're still finding innovative way to visualize superhero tech (this time out, it's a kind of Matrix-meets-Magic-Sand sort of deal), and still turning out fight choreography and stunts capable of quickening even the most jaded pulse (a nighttime car chase through the streets of Busan, South Korea, includes a moment engineered to elicit cheers, because Coogler knows what these films are about).

Plus there are war rhinos, so. I mean.

As for the story, it is a truth universally acknowledged that wherever there is a palace, there must be palace intrigue: T'Challa's claim to the throne is challenged by Michael B. Jordan's fabulously monikered Killmonger, who manages to mong quite a few kills before facing off against his rival. Like all of the best villains, Killmonger's motivations are grounded in his zeal to correct a great injustice — one may quibble with his master plan's methodology (i.e, the wholesale slaughter of billions), but you gotta admit: Dude has a point.

The Walking Dead's Danai Gurira, as Okoye, leads Wakanda's elite corps of female warriors, the sight of which in combat provides many of the film's most thrilling moments. Shuri (Letitia Wright), T'Challa's wry and brilliant younger sister, supplies the kingdom with its tech, and the film with its laugh lines. Lupita Nyong'o plays a love interest who's actually interesting — a young woman who chafes against Wakanda's age-old policy of hoarding its wealth and tech from the world. Angela Bassett is on hand, along with her cheekbones, to look regal and fierce in costume designer Ruth E. Carter's royal couture.

There's also a couple of middle-aged white dudes (Martin Freeman and Andy Serkis) doing stuff somewhere in the background, but never mind, the film isn't about them.

Which, of course, is truly what's new here.

The genre of superhero cinema is wider and deeper than many give it credit for, because the stories we've seen thus far have followed similar arcs, starring similar actors, in similar settings. In Black Panther, Coogler, too, rounds the familiar bases: Yes, those T'Challa versus Killmonger scenes do duly check the "Hero Fights Evil Version of Himself" box; yes, you've seen elements of that car chase before; and yes, the sudden but inevitable death of a supporting character does inspire T'Challa to scream "NOOOOOOO!" because that's the law.

But in a much more crucial way, Black Panther is a story we haven't seen told before in popular cinema — a story about black people completely untouched by colonialism, who exist entirely outside the global systems of institutionalized racism.

It's a fantasy, in other words — but then, that's exactly what superhero stories are for. It's difficult to explain the simple, inspiring and empowering joy of seeing a version of oneself onscreen, to those who've spent their lives unthinkingly soaking in it. A key reason for Wonder Woman's runaway success last summer was that moment she climbed out of that trench, revealed herself to the world, withstood an onslaught of machine-gun fire and proceeded to get Amazonian on some enemy soldiers. Male heroes have been doing something similar for decades, in and out of spandex, but now, women in the audience got the chance to feel the raw and blissfully uncomplicated power of representation and understand what the nerds in their life saw in this silly stuff. Black Panther is filled with similar moments: a pan-African cast getting hero moment after hero moment in a gorgeous Afro-futurist setting where the light is always golden, and the tech is always glowy.

There is a hole in the world, a big one. And although one movie, one fictional hero, can't fix it, it can tell a story — a new story — that millions have hungered for.

An earlier version of this story mistakenly listed the setting of a car chase as Seoul.