Accessibility links
Love Is All Around — Everyday — In 'Rookie On Love' "When we talk about love ... it's usually always referring to romantic partnerships. And I knew that I didn't want this book to just be about that," editor Tavi Gevinson says of the new anthology. 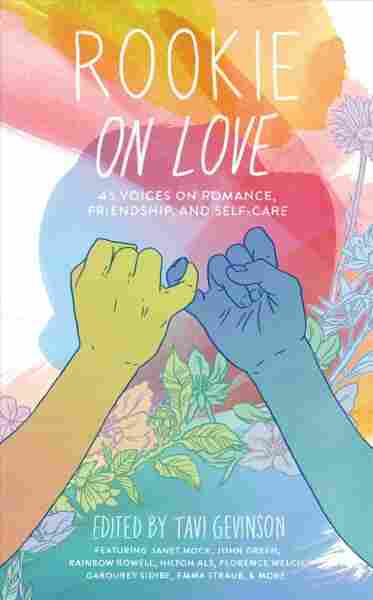 45 Voices on Romance, Friendship, and Self-care

On a starless night, Maria Popova remembers walking down a back road with her friend, Amanda, who had her newborn son strapped to her chest. Mourning the loss of a longtime relationship, Popova describes the darkness being so thick that "each stride seemed to slice the air apart." And then they came to a clearing that stunned her — in the middle of the woods, a glow-worm constellation. "The most remarkable thing, the most poetic thing," she writes, "was that they didn't glow to delight us onlookers — they glowed to find one another in the dark."

Popova's essay, "Radiance," is just one of many in the new anthology Rookie On Love, edited by Tavi Gevinson. Some of them will guide you out of the shadows, like Janet Mock's "How To Deal With Rejection" and Danielle Henderson's "You First." Mock writes about an unrequited crush on a neighborhood boy that led her to write unsent love letters, which eventually became journals, which was the beginning of her writing career. Henderson's essay celebrates setting boundaries, cultivating emotional fortitude, and going with your gut feeling.

But the new anthology features much more than essays about self-love. There are poems, interviews, and comics, like Esme Blegvad's "Omg, Yay!" about all types of love. It's the fifth published book from the collective at Rookie, an online magazine created by Gevinson.

In her introduction, Gevinson reminds readers that maybe what's so great about love is that there's room for many kinds. The editor and actress is democratic in that way. She hesitates to make any sweeping statements about "her generation" or "young people" because she seems to understand that everyone has their own experience, colored by the things, like your community, that make those experiences unique. 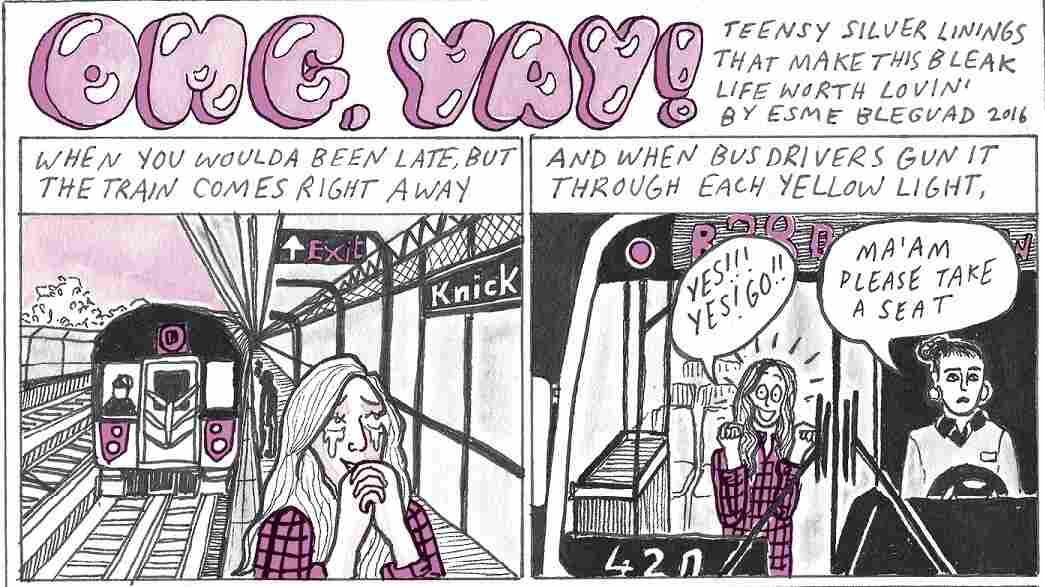 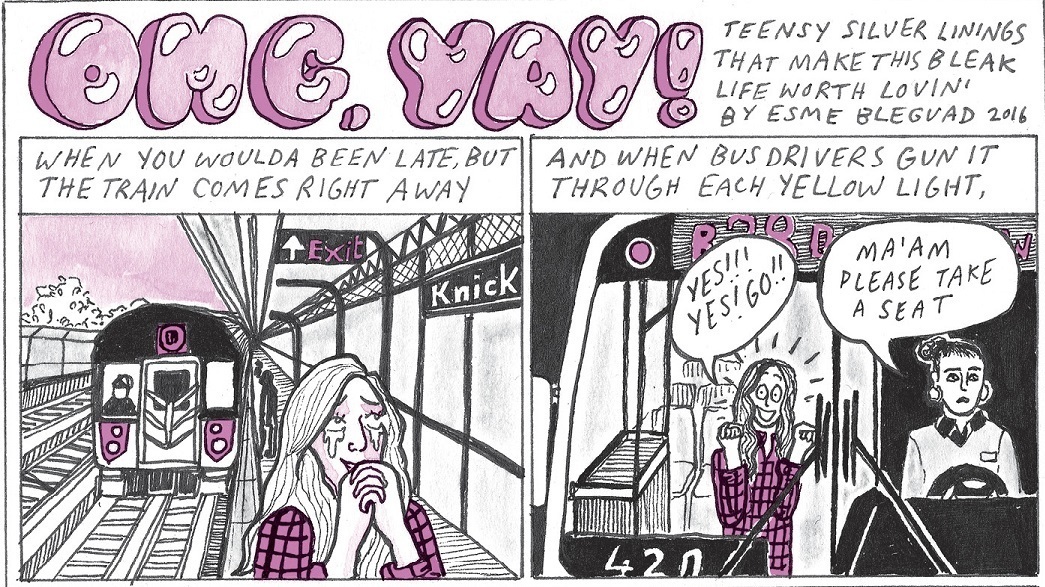 "OMG, yay!" by Esme Blegvad in Rookie On Love.

This may be why there are 45 contributors, ranging from 20-year-old Rookie reader Victoria Chiu from Alberta, Canada to those like Margo Jefferson and Rainbow Rowell. Gevinson says she wants readers to know that an experience with love could look like anything — and be anything.

"There's a feeling here, and especially now, that you're not a person unless you have an audience and that a feeling of belonging in the world is something to be gained or won — and not a kind of inalienable right that you're born with just because you're a person," she says. "So I wanted to commission work from people that focused on that sense of belonging." 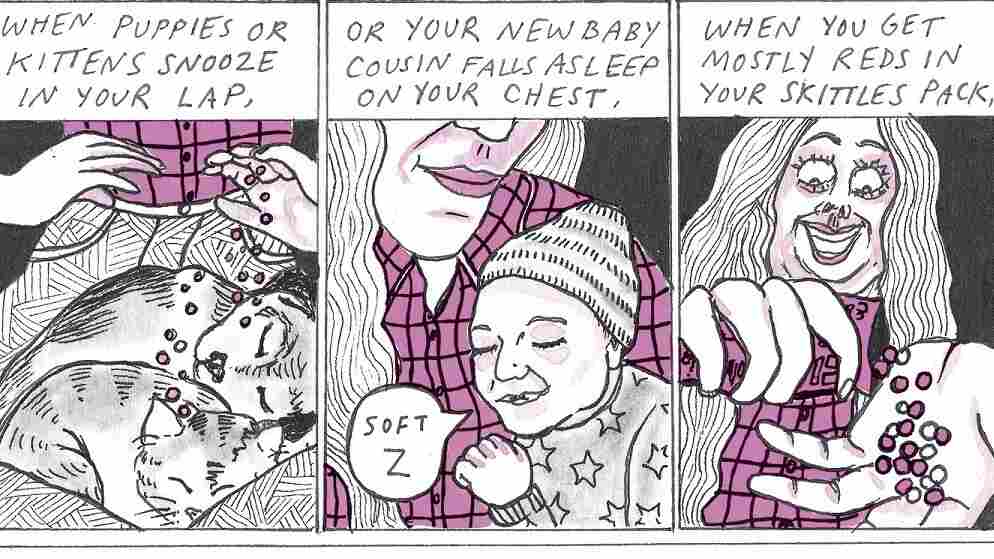 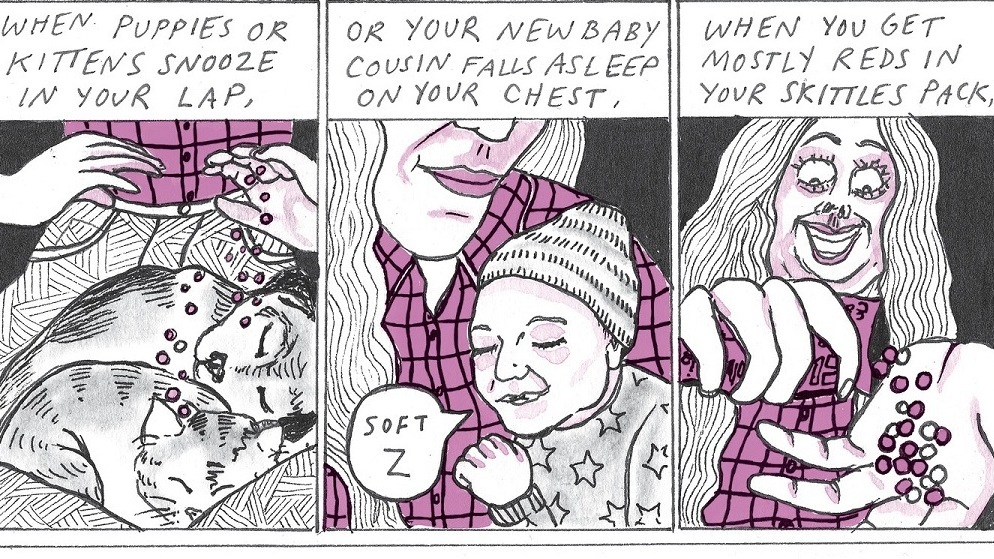 "OMG, Yay!" By Esme Blegvad in Rookie On Love.

In her essay "Centripetal Force," Mitski Miyawaki writes about how she finds belonging within her relationship with music. She tells me, "Sometimes I think we create things to love, or people to love, because we need to love it."

Miyawaki writes that in music, she finds both her family and her great romance, but also herself. Like most loves, it's not without its tensions. In the pursuit of being a musician, the singer writes that she's felt herself hitting "the hard ground." And so after tour she has a ritual: She finds somewhere quiet with a piano and a guitar, and she performs for herself. Ultimately, her love of music allows her to "melt into the universe."

"I've not been the perfect person," Miyawaki says. "I've made mistakes, I've been ignorant, I've been arrogant, but the practice of music has kind of — my ability to bring something beautiful out of myself makes me believe in there still being beauty inside me, or goodness inside me. And that realization also translates to how I view other people, I think."

Gevinson emphasizes how difficult connection and simple communication can be — between anyone — in her essay "Before I Started Writing These Things Directly To You." She tells me that she thinks one of the biggest misconceptions about the way people her age communicate is maybe "that consent is just something that young people are confused by."

What Does It Mean To Be A Teenage Feminist Today?

Rookie reader-turned-contributor Victoria Chiu realizes her agency in choosing to take her relationship slow in "Under Pressure." And this happens against the pressure she feels, outside of her partner, to use sex to legitimize it.

"I've actually asked my partner a lot if he thinks that we're missing something because of what we have or haven't done, and he always says no and that if I'm not into it, then it wouldn't be enjoyable anyway," she says.

There are honest revelations on familial love, too. In the interview, "Do Sisters Actually Love Each Other?" Jazmine Hughes goes on a quest to explore her relationship with her four sisters via "Cheetah Girls," a group text. She highlights the importance of internet humor in keeping the conversation going.

"We're not a phone family," she says. "We're not really a crying and hugging family; we're not a hand-holding family, but we are a meme family."

To keep up with everyone, Hughes instituted a practice in which all 5 sisters have to stop what they're doing and send a selfie when someone types "selfie check" into the group message. "We don't have to write incredibly long letters or have these involved phone calls," Hughes tells me. "We just send a picture of us eating a disgusting slice of pizza, and then that's it. That's all anybody really needs to know, anyway."

But it's these small gestures that help Hughes see her younger sisters in a truer sense. "If one of my sisters got really drunk or something, we would talk about it in the group text," Hughes says. "In my head I'm like, 'How on Earth could you get drunk because you're 7-years-old, and we're still fighting over your Barbie,' or something. But in actuality, they're 21, they're going to the bar, they're living their best and most successful lives." 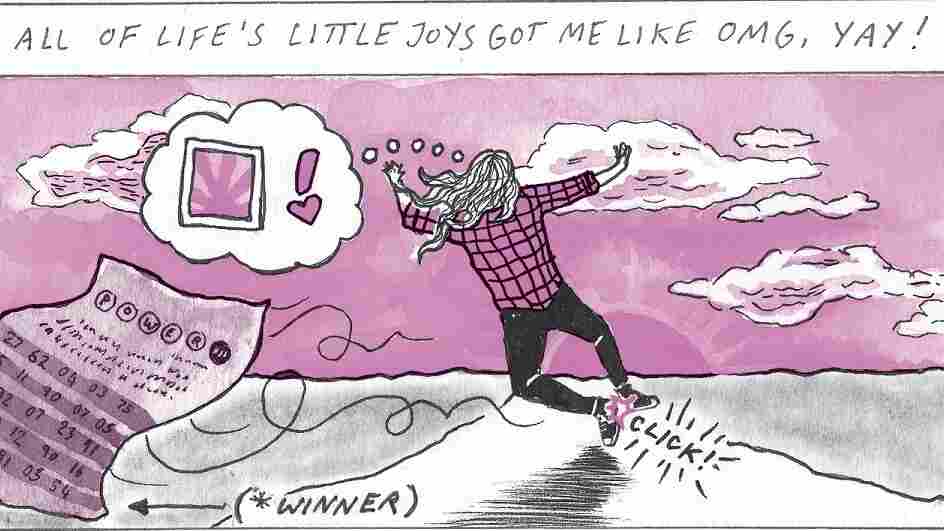 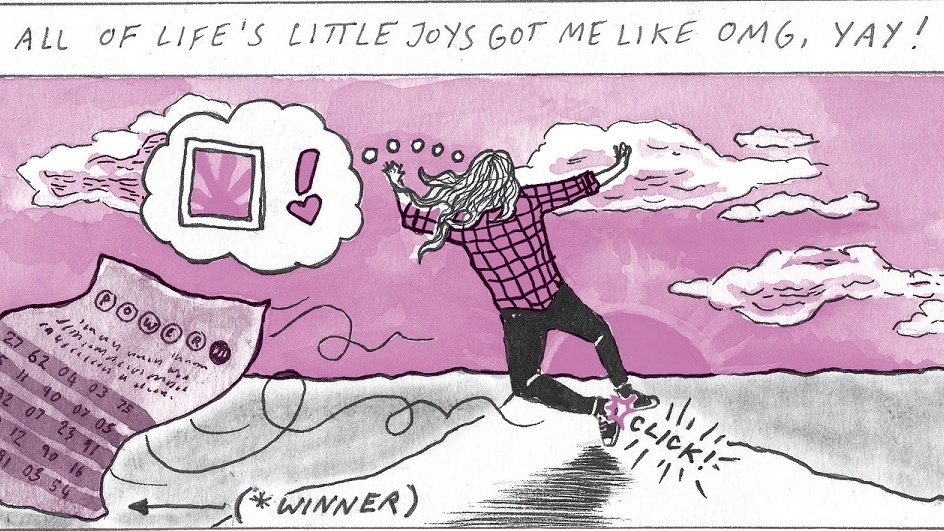 No matter the type of love, there's often an exchange, of seeing and allowing yourself to be seen. Hilton Als tells me there's strength in this vulnerability. In "Lonesome Cowboy," he reflects on what art teaches us about being receptive to love, specifically inspired by Montgomery Clift's performances. Als writes that watching the actor taught him that "there is no shame in being receptive to a given situation or person." And I ask him about that shame.

"It's something that most of us have in common, which is, as Carson McCullers wrote, "It's the fear of being seen," right? It's [that] your beloved, the person who loves you, wants to see you. And it's tremendously difficult to be seen and to be stripped bare."

Throughout Rookie On Love, we're reminded that perhaps love is such an universal experience because it shines light on all parts of us — the edges and the opposites. In allowing ourselves to be seen, all sides of ourselves begin to look at each other without certain shadows standing in the way. With love, of any kind, and the courage to be loved, life becomes illuminated.