Accessibility links
Senate Fails To Advance Any Immigration Proposals The Senate failed to pass any immigration legislation before a self-imposed Friday deadline. Without a bill, roughly 700,000 immigrants stand to lose legal protections as early as March 5. 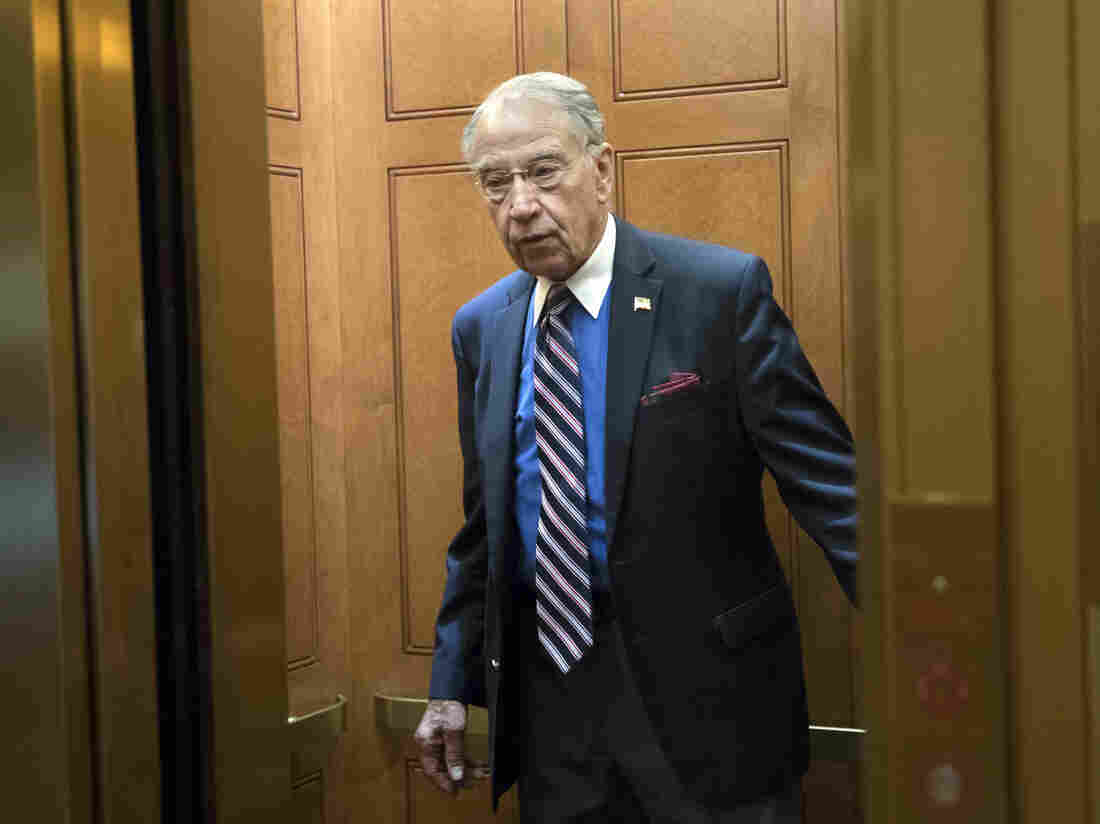 Sen. Chuck Grassley, R-Iowa, arrives at the Capitol in September. Thursday, despite pleas from Grassley, the Senate defeated an immigration bill that had been backed by the White House. J. Scott Applewhite/AP hide caption 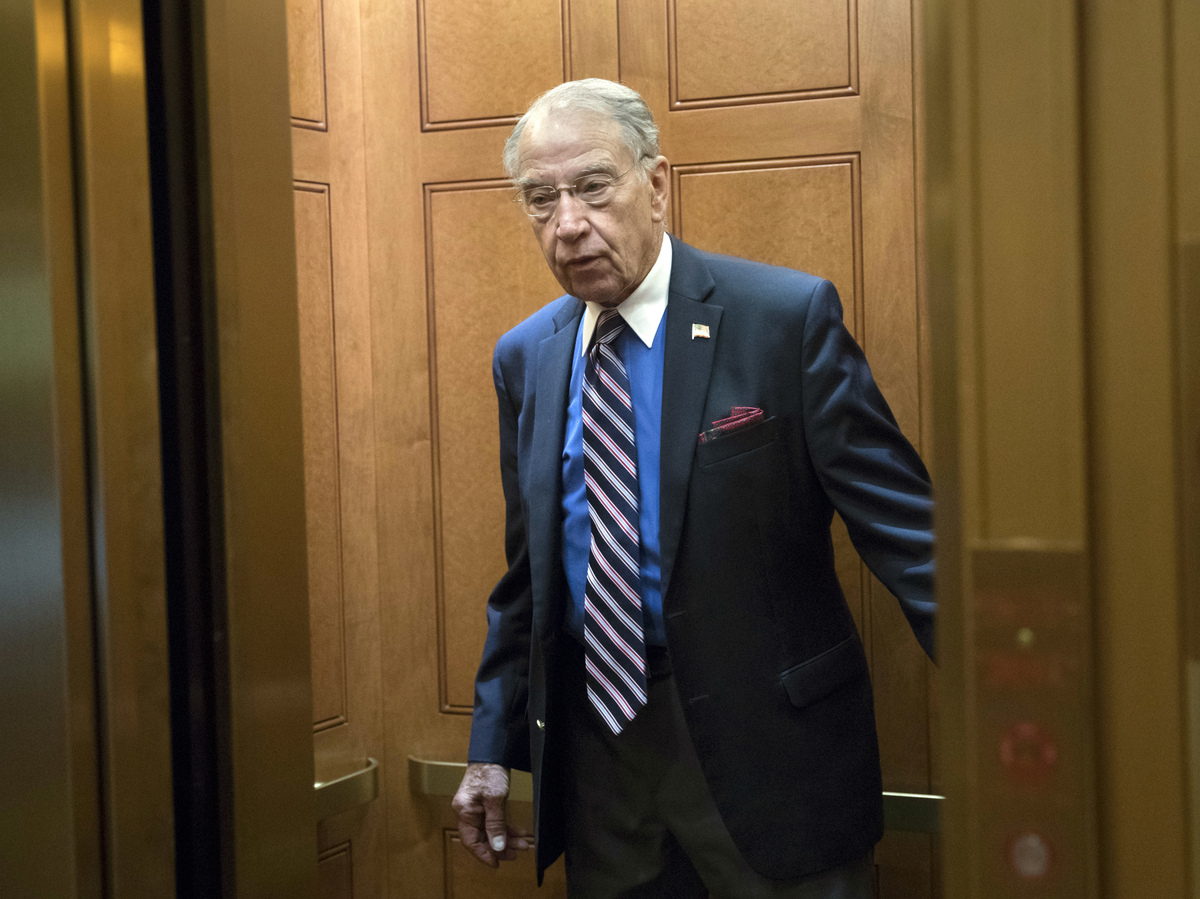 Sen. Chuck Grassley, R-Iowa, arrives at the Capitol in September. Thursday, despite pleas from Grassley, the Senate defeated an immigration bill that had been backed by the White House.

The Senate failed to pass any immigration legislation before a self-imposed Friday deadline, leaving lawmakers with no plan to address the roughly 700,000 immigrants who stand to lose legal protections as early as March 5.

The defeat follows a rocky 24 hours of negotiations on a bipartisan bill that failed following a veto threat from President Trump. By a 39-60 vote, senators rejected a White House-backed plan that became a partisan lightning rod after Trump insisted his plan was the only one he would sign.

"This is it in a sense," Grassley said on the Senate floor. "The only plan that can become law because the president said he would sign it. This is it. This is your last chance."

Republicans abandoned the bipartisan plan following the White House veto threat. That plan, negotiated by a group of roughly 22 Republicans and Democrats, would pair a 12-year path to citizenship for all immigrants eligible for the Deferred Action for Childhood Arrivals program with $25 billion in border security spending and limits on which family members the beneficiaries can sponsor for citizenship.

The bill failed 54-45, with all but three Democrats voting in favor. Among those voting against the bill was California Democrat Kamala Harris. A large share of the DACA population lives in California and Harris was under intense pressure from immigrant rights activists to oppose the bill.

It is unclear whether those currently protected under DACA will immediately lose legal protections if the White House repeals the program as planned on March 5. Court orders by a pair of federal judges in New York and California have blocked the administration's plans to end the program, meaning the government is required to continue processing renewal requests from people already enrolled.

The veto threat and other White House intervention frustrated Democrats and those Republicans who helped craft the bipartisan bill. Sen. Lindsey Graham, R-S.C., expressed irritation that the White House was relying heavily on hard-line immigration advisers.

"You've got the most extreme characters in town running the show," Graham told reporters. "What do you expect?"

Conservatives Warn Speaker Ryan To Hold The Line On Immigration

The GOP-written Grassley bill would have allowed 1.8 million immigrants a chance to apply for citizenship. In exchange, the bill scaled back current legal immigration by ending the visa lottery system and cutting family-based immigration policies, which the president and many conservatives refer to as "chain migration."

In a statement Wednesday, Trump said he would reject any bill that did not meet his four pillars: "A lasting solution on DACA, ending chain migration, cancelling the visa lottery, and securing the border through building the wall and closing legal loopholes."

"I am asking all senators, in both parties, to support the Grassley bill and to oppose any legislation that fails to fulfill these four pillars," Trump said in a statement. "That includes opposing any short-term 'Band-Aid' approach."

Immigration Debate Starts As A Jump Ball In The Senate

Many Democrats and some Republicans said they wanted to focus on granting rights to those immigrants who are in the country illegally after being brought in as children. Roughly 700,000 of those immigrants stand to lose legal protections starting on March 5, the date that the White House has established for the beginning of the sunset of the DACA program, established by President Barack Obama.

Tensions were high as senators began to rally around Trump's demands on Wednesday. A visibly frustrated Grassley vented to reporters that Democrats needed to drop their opposition to the family-related portions of the bill and embrace the only offer Trump has embraced.

"The Democrats have been pleading for months and months and months for justice on this," Grassley said. "Now you've got a compassionate president who has gone way beyond what they ever thought he would do. Why would they turn it down?"