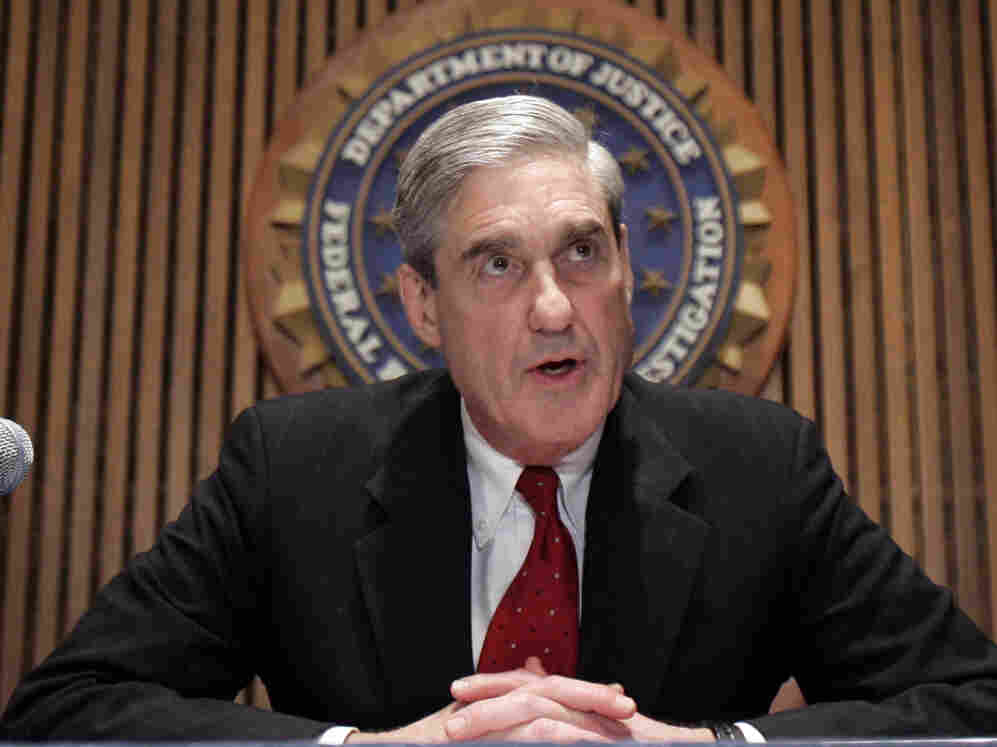 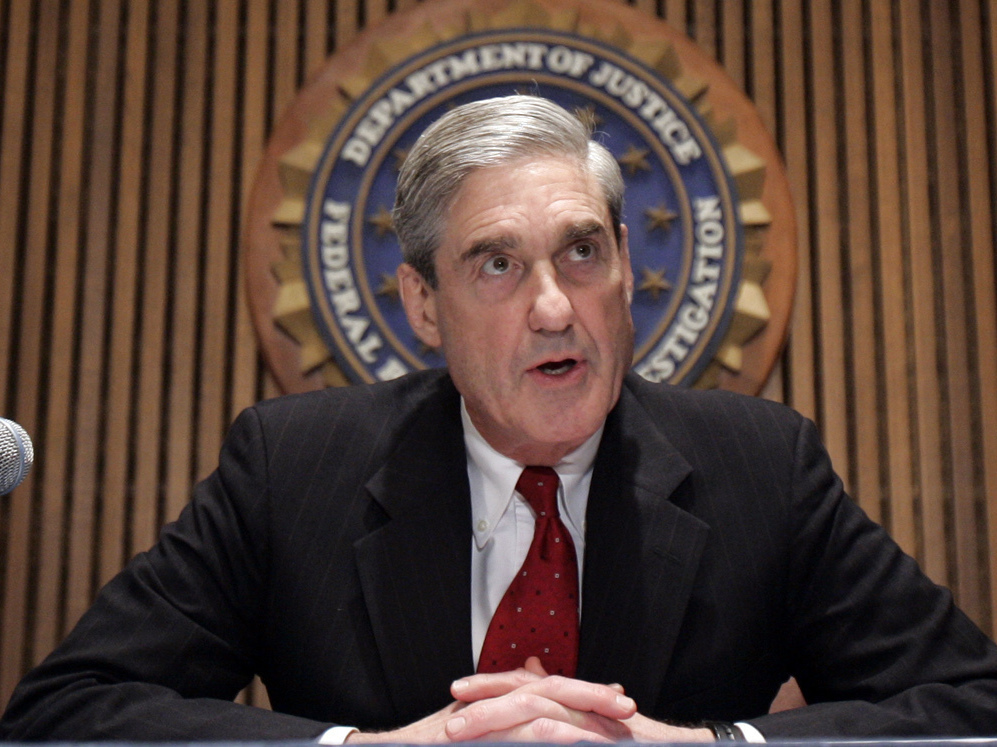 A federal grand jury has indicted 13 Russians and three Russian entities in connection with the attack on the 2016 presidential election.

The defendants are "accused of violating U.S. criminal laws in order to interfere with U.S. elections and political processes," according to a statement from the special counsel's office. The indictment charges them with "conspiracy to defraud the United States, three defendants with conspiracy to commit wire fraud and bank fraud, and five defendants with aggravated identity theft."

Some of the people described in the court documents even traveled to the United States or "communicated with unwitting individuals associated with [President Trump's campaign] and with other political activists to seek to coordinate political activities," the indictment says.

The charges include some of the most detail yet from Justice Department special counsel Robert Mueller about who inside Russia waged the broad campaign of "active measures" against the United States.

At a Friday afternoon news conference, Deputy Attorney General Rod Rosenstein, who oversees Mueller's investigation, called the Russian efforts "information warfare" with "the stated goal of spreading distrust against the candidates and the political system in general."

However, Rosenstein underscored that there is "no allegation in this indictment that any American was a knowing participant in this illegal activity" and "no allegation that this activity actually altered the outcome of the 2016 election."

President Trump tweeted on Friday shortly after the indictment was handed up that it proved that there was "no collusion" between his campaign and Russian agents.

Russia started their anti-US campaign in 2014, long before I announced that I would run for President. The results of the election were not impacted. The Trump campaign did nothing wrong - no collusion!

The White House also put out a statement from Trump later in which he said "it is more important than ever before to come together as Americans. We cannot allow those seeking to sow confusion, discord, and rancor to be successful. It's time we stop the outlandish partisan attacks, wild and false allegations, and far-fetched theories, which only serve to further the agendas of bad actors, like Russia, and do nothing to protect the principles of our institutions. We must unite as Americans to protect the integrity of our democracy and our elections."

However, Trump has, at times, doubted that there were any efforts by Russians to influence the 2016 election, which Friday's indictment clearly outlines in rich, lengthy detail. He has called media reports and other discussion of the Russian interference campaign a "hoax" and "fake news." And last month the administration decided not to impose new sanctions on Russia despite a law passed by Congress.

Trump's personal lawyer, John M. Dowd, also said in an email that he was "Very happy for the country. Bob and his team did a great job!"

The actions the Russian individuals and entities allegedly carried out — some of which date to May 2014 — are extraordinarily detailed and complex as part of what the indictment refers to as "Project Lakhta."

The largest company indicted, the Internet Research Agency, was based in St. Petersburg, Russia, and was funded through shell companies by another individual indicted. The IRA employed as many as 80 people focused on the sole project of disrupting and influencing U.S. elections, according to the indictment. By September 2016, the company had a monthly budget of more than $1.25 million and was organized into multiple departments, including graphics, search engine optimization, information technology and finance.

The government alleges two defendants traveled to the U.S. and others attempted to hide their Russian origins, even using a virtual private network in the U.S. so it would appear their activity originated there. The Russians also paid real Americans to work for them as part of their interference campaign. However, "the Americans did not know they were communicating with Russians," according to the indictment.

They also used "false U.S. personas to communicate with unwitting members, volunteers, and supporters of the Trump campaign involved in local community outreach, as well as grassroots groups that supported then-candidate Trump," the indictment alleges. Through these personas, they encouraged minority voters in the U.S. to either not vote in the 2016 election or to cast their ballots for a third-party candidate. And they also promoted allegations of voter fraud among Democrats — a message the Trump campaign seized upon in the closing days of the campaign.

Other actions the defendants allegedly undertook, according to the indictment, included "buying political advertisements on social media in the names of U.S. persons and entities. Defendants also staged political rallies inside the United States, and while posing as U.S. grassroots entities and U.S. persons, and without revealing their Russian identities and organization affiliation, solicited and compensated real U.S. persons to promote or disparage candidates." To do so, they stole the identities of many people, including compromising their Social Security numbers, birthdays and home addresses.

According to the indictment, many of the advertisements the Russians purchased were designed specifically to malign Democratic presidential nominee Hillary Clinton. "Donald wants to defeat terrorism...Hillary wants to sponsor it," one ad on May 10, 2016, read. "Hillary is a Satan, and her crimes and lies had proved just how evil she is," was the message of another one on Oct. 19, 2016, just weeks before Election Day. And the indictment alleges the Russian defendants also frequently used election-related hashtags like #TrumpTrain, #MAGA and #Hillary4Prison.

The Russian agents also organized pro-Trump rallies and anti-Clinton rallies, the indictment alleges. They employed real U.S. persons to perform tasks at these events, such as paying one "to build a cage on a flatbed truck and another U.S. person to wear a costume portraying Clinton in a prison uniform."

And the Internet Research Agency also kept a list, the indictment says, of the more than 100 real U.S. people it had contacted to help with its recruitment efforts, logging their political views and what they had been asked to do by the Russian operation.

According to the indictment, the individuals created hundreds of social media accounts to influence public opinion that were masquerading as legitimate U.S. political groups. The indictment points to one account, Tennessee GOP (@TEN_GOP), which gained over 100,000 followers yet had no affiliation with the actual state political party.

The Internet Research Agency also had employed monitoring of social media during both day and night shifts so information would be posted across U.S. time zones, according to the indictment. The Russian operatives were also aware of U.S. holidays and made posts germane to those and also employed people who could post on social media about specific policy topics, such as the economy or foreign policy.

The Russians also allegedly created specific groups on Facebook and Instagram. Starting in at least 2014, they spent thousands of dollars each month to purchase targeted advertisements on social media sites. And there was allegedly specific targeting of "purple states," or swing states, that are critical to the outcome in the Electoral College.

There were also efforts beyond influencing the election to simply sow discord and confusion. For example, defendants allegedly organized both pro-Trump and anti-Trump rallies in New York City.

Rep. Adam Schiff, D-Calif., the top Democrat on the House Permanent Select Committee on Intelligence, which is also investigating Russian interference in the 2016 election, called the indictment from Mueller "a significant step forward in exposing Russia's political and electoral interference in our democracy and holding Russia, and its agents, accountable."

"While it does not include an allegation that any U.S. persons conspired wittingly with the Russian actors, the indictment leaves open the vital question of whether Americans, including any associated with the Trump campaign, knowingly played a role in Russia's active measures campaign," Schiff also said in a statement.

Sen. Mark Warner, D-Va., the vice chairman of the Senate Select Committee on Intelligence, which is also probing Russian interference, said that "While platforms like Facebook and Twitter are allowing Americans to communicate and share ideas in ways unimaginable just a decade ago, we're also learning that we each bear some responsibility for exercising good judgment and a healthy amount of skepticism when it comes to the things we read and share on social media."

Sanders, who was in part a beneficiary of the Russian efforts according to the indictment, said in a statement that it's "clear to everyone (except Donald Trump) that Russia was deeply involved in the 2016 elections and intends to be involved in the 2018 elections. It is the American people who should be deciding the political future of our country, not Mr. Putin and the Russian oligarchs."

House Speaker Paul Ryan, R-Wis., who has been more accepting of evidence of Russian interference than Trump has, said the "announcement underscores why we need to follow the facts and work to protect the integrity of future elections."

"These Russians engaged in a sinister and systematic attack on our political system. It was a conspiracy to subvert the process, and take aim at democracy itself," Ryan also said in a statement.

"This ought to be a wakeup call to Washington: Putin's shadow war is aimed at undermining Americans' trust in our institutions," Sasse also said in a statement. "We know Russia is coming back in 2018 and 2020 — we have to take this threat seriously."

However, Republican National Committee Chairwoman Ronna McDaniel struck a tone similar to Trump's, saying in a statement that it "remains crystal clear there was no collusion and the Russians were unsuccessful in their attempts to influence the results of the election."

But, unlike the president, McDaniel did say that the indictments "should serve as a rallying cry for Washington and the country to come together to prevent Russia, or any foreign government, from attempting to meddle in future elections."

And McDaniel blamed on the Obama administration during remarks on Fox News Friday, saying the previous administration didn't take the threat from Russia seriously enough.

The indictment follows warnings this week by the heads of the U.S. intelligence community that Russia's active measures campaign never stopped after 2016 and that the leaders of the major U.S. spy agencies expect interference to continue through this year's midterm elections.

And Friday afternoon, John Brennan, who was CIA director during the Obama administration from 2013-2017, tweeted that the "DOJ statement and indictments reveal the extent and motivations of Russian interference in 2016 election." Brennan, who has been a frequent critic of Trump, also said, "Claims of 'hoax' in tatters."

DOJ statement and indictments reveal the extent and motivations of Russian interference in 2016 election. Claims of a “hoax” in tatters. My take: Implausible that Russian actions did not influence the views and votes of at least some Americans.

Can The U.S. Combat Election Interference If Some Don't Believe It's Happening?