Accessibility links
'Black Panther' Costume Designer Draws On 'The Sacred Geometry Of Africa' Ruth Carter is the costume designer for the Marvel's Black Panther movie. She talks about how she grounded the movie's futuristic look in the history and traditions of tribes from all over Africa. 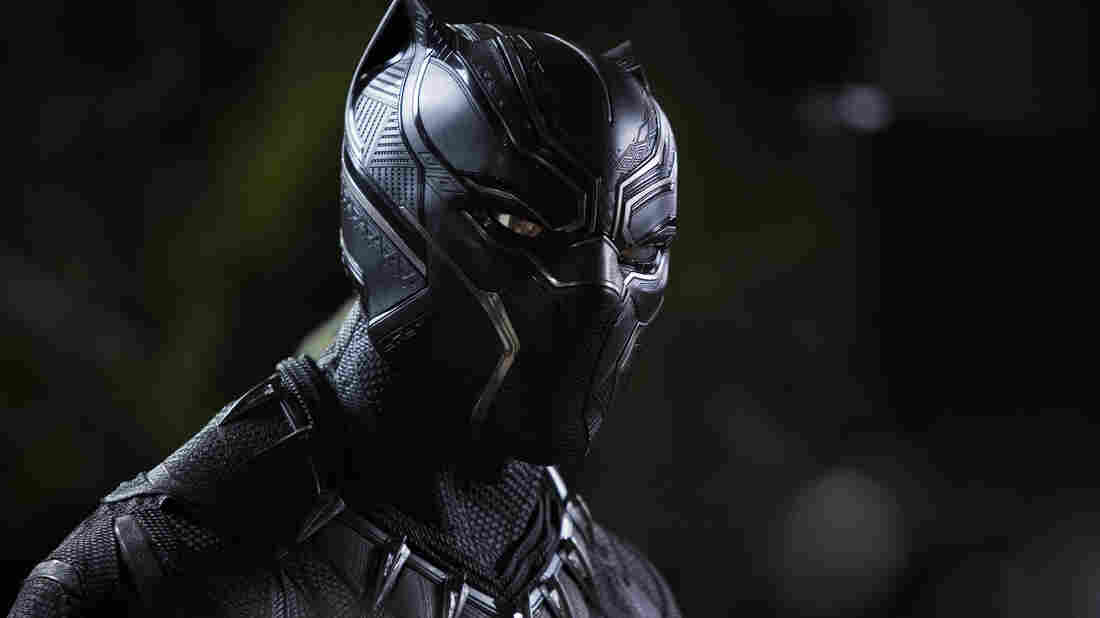 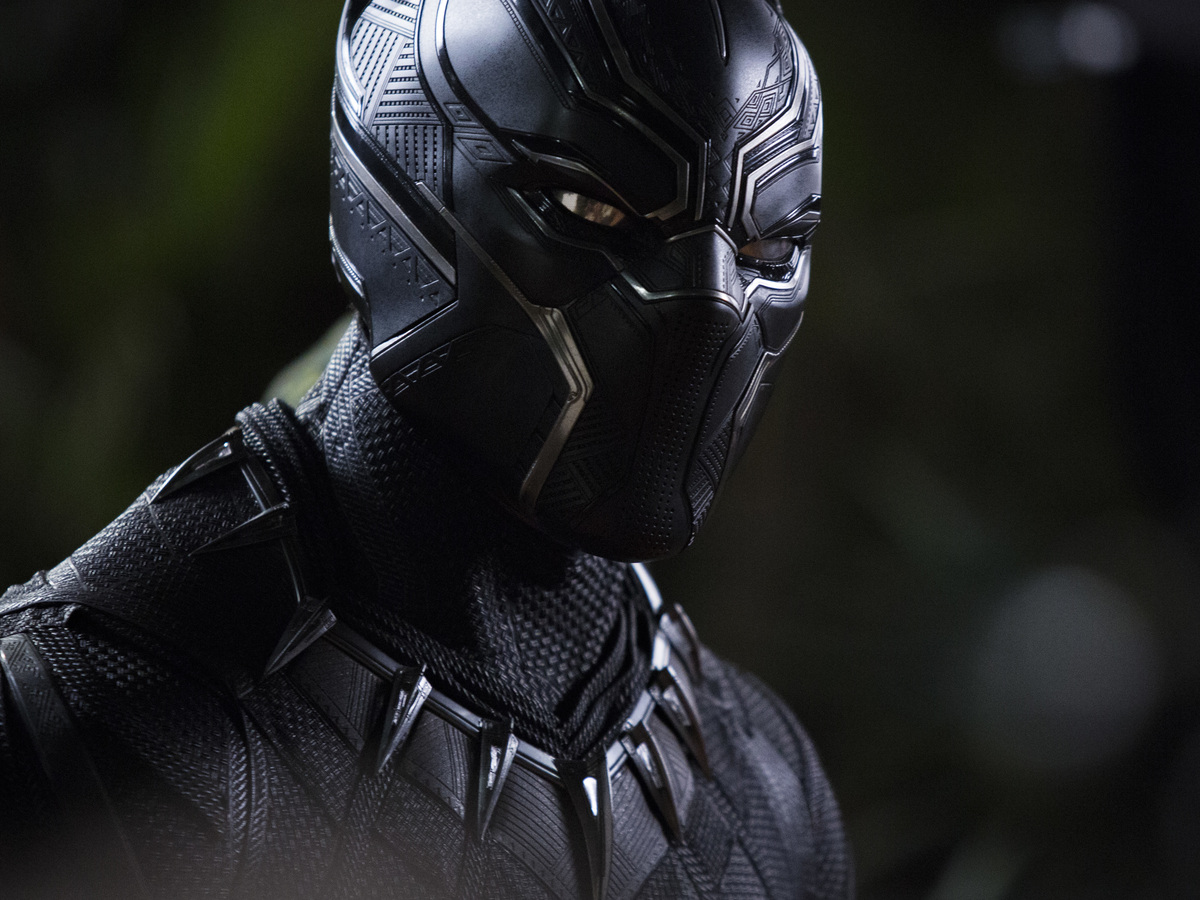 Black Panther is the latest offering from Marvel and Disney — if you don't already know the story, here's quick synopsis: It's about T'Challa, the superhero Black Panther and the king of Wakanda, an isolated, technologically advanced African country that sits upon a rich deposit of the metal vibranium, the strongest substance in the Marvel world.

When you see the movie, you'll notice quickly how Wakanda looks like the future: It's full of details like healing tables and hovercraft, all powered by vibranium. But if you look at the costumes, you can see that that Wakanda's Afro-futurism is grounded in the past.

That triangle ... made his suit have this character that would, in the wide shots, make him this superhero but in the close-up, you see this beautiful pattern that is consistent with a lot of the art of Africa and would turn him into this African king.

Designer Ruth Carter — whose previous films include Selma, Malcolm X and Roots — pulled colors, shapes, jewelry, and textures from tribes all over Africa. She says she wanted to tell a story "of brilliance, royalty, intrigue — you name it. I feel that you can tell a story through clothing."

One detail Carter particularly likes is in the Black Panther suit worn by Chadwick Boseman, who plays T'Challa. The suit was created by Marvel character designer Ryan Meinerding, but the fabric has a triangular surface pattern that's all Carter.

"That triangle is the sacred geometry of Africa," Carter says. "I call that pattern the 'Okavango' pattern. I felt that it made his suit have this character that would, in the wide shots, make him this superhero but in the close-up, you see this beautiful pattern that is consistent with a lot of the art of Africa and would turn him into this African king."

Carter's costumes needed to evoke an African country that had never been colonized, one that looked toward the future but was based on a real past. So she found inspiration from African art and craft, and indigenous tribal wear from all over the continent. Then she and her team worked to create group drawings of the various groups in Wakanda. 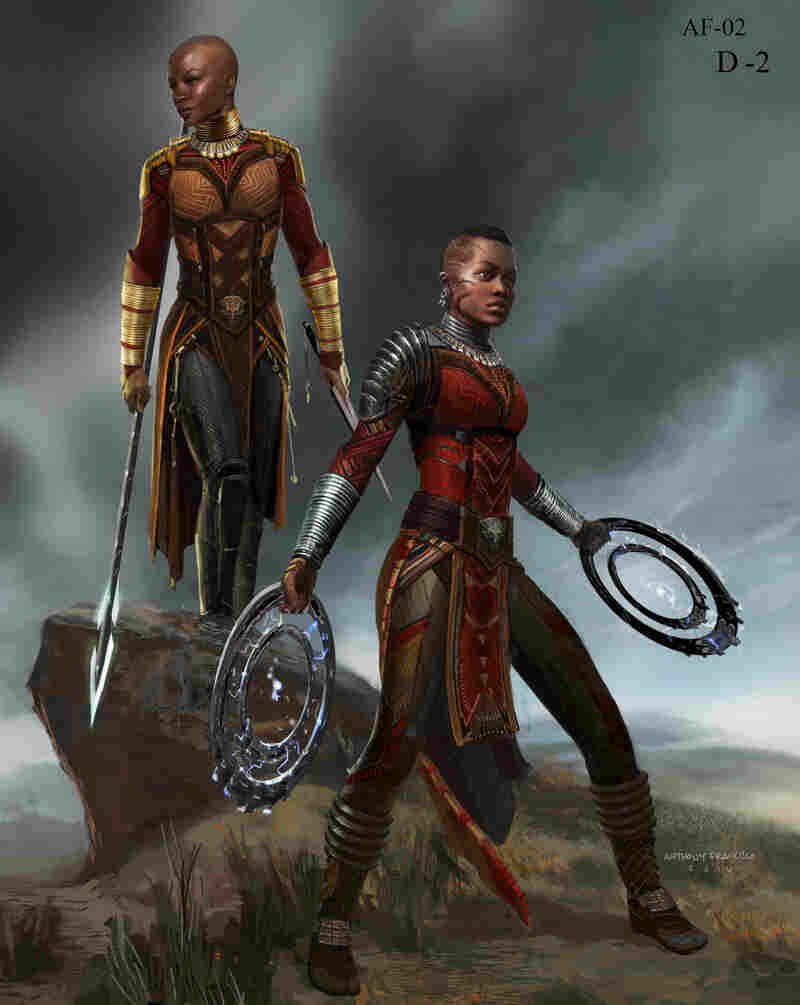 The armor worn by the Dora Milaje — Wakanda's elite female guard — draws on traditions from Kenya, South Africa and Namibia.

"And we did them as they were centuries ago," she says. "Then, it was a process of deciding how we go from there in the past, to where Wakanda would be in the future." For Carter and her team, that meant using the same color palette, the same headdresses or beadwork but with more modern sillhouettes. The Dora Milaje, for example, are Wakanda's elite team of female warriors, and they wear bright red military uniforms, a leather harness and beaded tabard, and metal neck rings and armor. It's a striking look that Carter created "based on some of the beloved practices of many indiginous tribes" like the Maasai of Kenya, the Ndebele of South Africa, the Himba people of Namibia.

The bright red color comes from those tribes in Kenya. The Dora Milaje's leather harnesses were crafted in the way of South African leathersmiths — woven together with a big heavy stitch. Their tabards feature intricate beading, a nod to the beadwork found throughout Africa. Even their tights are patterned with the same triangular pattern you can see on the Black Panther suit.

"I really wanted this to have a feeling that if you were an aspiring Dora Milaje and you were granted permission to be a member, you would be presented with this beautiful honor and this beautiful uniform that was exclusively yours and handsmade by craftsmen."

But where Carter stayed closer to traditional tribal wear for the Dora Milaje, an institution in Wakanda, Carter looked further into the future with another character, Shuri. She's T'Challa's younger sister and the resident tech genius — her lab is a science fiction dream and she creates and builds all of Wakanda's technology, including the Black Panther suit. For Shuri, Carter was guided by one scene in the film: Representatives from each tribe have gathered for the King's Challenge — anyone wishing to take the throne must challenge T'Challa to a fight. Shuri wears a traditional costume, including a corset inspired by the Dinka people, and she shouts at one point, "Can we get a move on? This corset is uncomfortable.

"So she told us right away that that's not where she comes from, that's not where she wants to be mentally," Carter says. From there on out, Shuri dresses in clothes with modern sillhouettes and fabrics — Carter chose youthful, vibrant colors overlaid with mesh fabrics or bold outlines. But Carter says the shape of her clothing still holds meaning.

"Her first dress is a white dress and we created the front of it to be this cylindrical round shape — and I was trying to connect shapes within Wakanda so you see them repeat. It's the language of Wakanda."

Carter knows a lot about the world of Wakanda now, but when she was first asked to interview for Black Panther, she thought it was a simple superhero film. "I knew about him as a superhero, but I didn't know that he lived in a secret place called Wakanda — I knew he was from Africa, but I didn't know that they weren't colonized and they had all different types of tribes within their little hidden country."

Carter says the more she understood about Black Panther and the people of Wakanda, she began to get scared. "This is [a character] that's gone back fifty years and I'm going to be given the task to create this world on camera for the fans!"

But she got over her fear and set about creating a rich tapestry of color and texture. She says her experience on the film underscored how costume design is art. "I learned that I was an artist, that I could communicate and tell stories through this wonderful medium of adornment. The adornment of Africa has always been a part of their beauty from scarification to beadwork to woodwork, and I fell in love with it even more."