Accessibility links
Bernadette Peters On Fulfilling The Red Dress Of 'Hello, Dolly!' The Tony-Award-winning actress, the latest to play the titular role of Dolly Levi on Broadway, describes what she brought to an enduring musical. 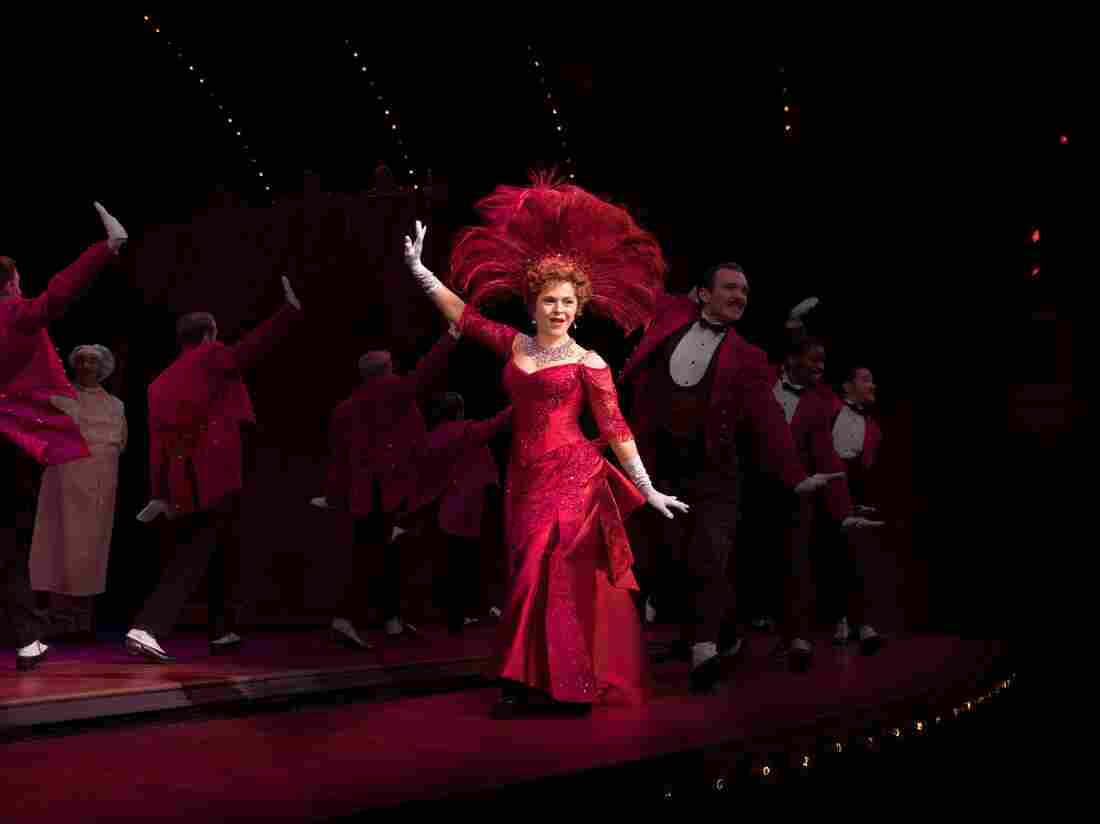 Bernadette Peters is the latest in a long line of Broadway stars to play the title role in Hello, Dolly! Julieta Cervantes/Courtesy of the artist hide caption 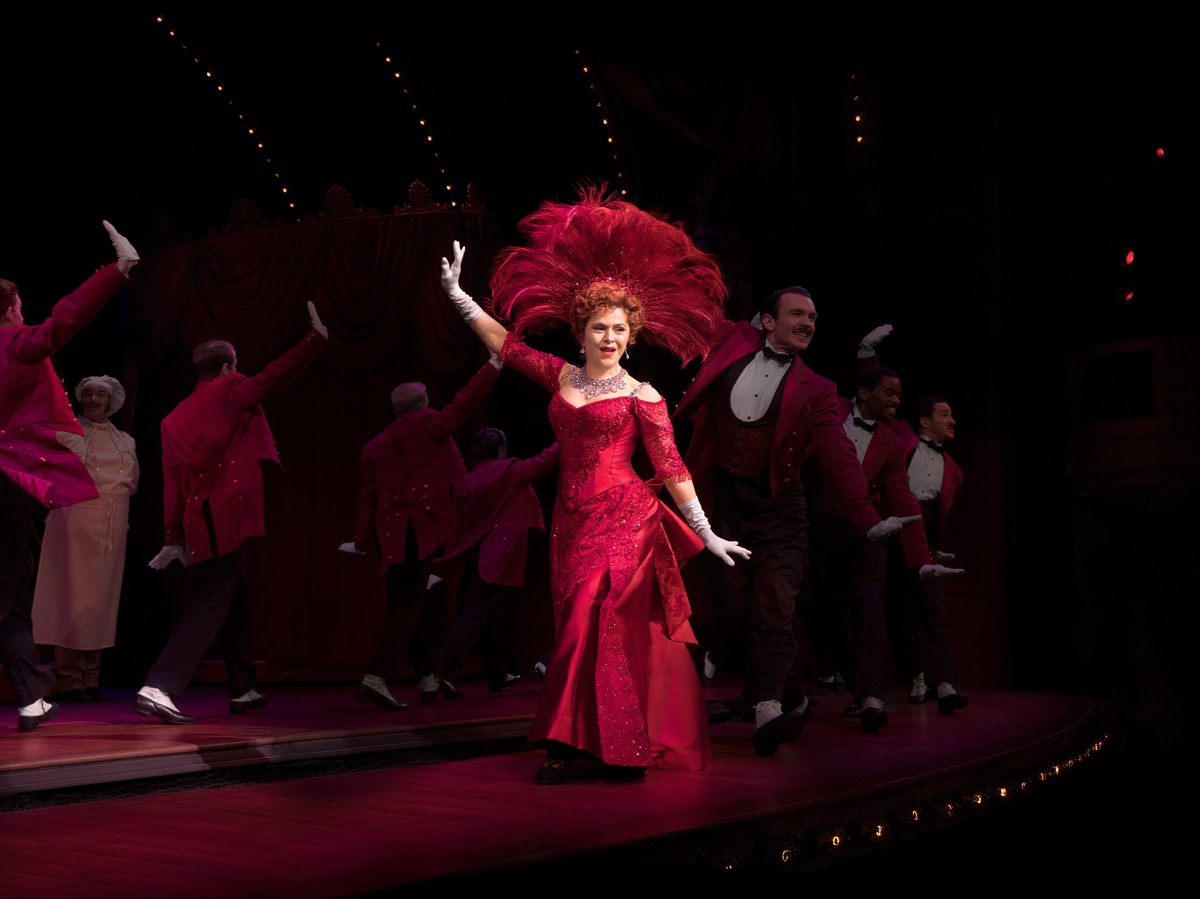 Bernadette Peters is the latest in a long line of Broadway stars to play the title role in Hello, Dolly!

Julieta Cervantes/Courtesy of the artist

There's a big, glittering musical in a classic key on Broadway again, where the townspeople of Yonkers sing and dance, the New York Central train toots steam and the audience starts standing in ovation from the moment the big-name star takes the stage.

Bette Midler played that role last year. Pearl Bailey, Mary Martin, Ethel Merman, Donna Murphy and many other big Broadway stars have played Dolly Levi in Hello, Dolly! — Jerry Herman's 1964 work which won a record-tying 10 Tony Awards and has become one of America's most enduring musicals. Barbara Streisand played the role on-screen. Louis Armstrong's recording of the title song became the No. 1 hit in U.S. and won a Grammy Award.

"One, oh two!" she says. "No, three now. OK, I saw Carol Channing the last time she did it, and was overwhelmed. I was blown away — I just loved, I loved what she did. It was so artful and amazing. And then I saw Bette, who was magnificent ..."

Bernadette Peters, who is herself a Broadway legend, knew she had to step into large, red-sequined shoes when she agreed to play the Yonkers matchmaker and maven of all trades. Peters told us she's learned from all the actors who have preceded her.

"I steal from the best, I always say," she says.

How she took on and portrayed the role of Dolly

And then when I took on the role, though, I just — I started from scratch. I read the script, I read The Matchmaker — the play that Mike Stewart wrote [Hello, Dolly!] from — and I found this person, this woman. I found the woman that I would play in it, the Dolly I would play.

Well, she's a widow, and she's a matchmaker but she's also does — she does anything basically because she doesn't want people to know, but she's actually living from hand to mouth since her husband passed away. So she does everything from financial consultation, instruction in the guitar and mandolin, short-distance hauling, varicose veins reduced. But — and she decides that she should get married again to this rich man for his money. But she's already set him up, because she's a matchmaker, with somebody else. But she decides, no, I should marry him. The way Jerry Herman describes it, which is really wonderful — he says she's decided to rejoin the human race, after being in her haze after her husband had died. And the show is all about how she goes about rejoining the human race, which I think is a lovely description.

Well, I think that's the moment between the audience and the person playing Dolly when you — "thank yous" are going back and forth. I'm thanking them for being there, they're thanking me for being there, for fulfilling that number again, filling that red dress again. I'm happy to be there, and they're happy to have me come down the stairs, to fulfill that moment and that number.

How she finds songs to perform and record

I sing "Johanna," which is a man's song. But I saw Victor Garber — who's playing opposite me in [Hello, Dolly!] — I saw him sing it originally, which made me love the song so much that I figured out a way for me to sing the song, 'cause I just loved it. And it was inspired by Victor.

On the advice she gives to young performers

Let me just say — the young performers are so talented nowadays. Our, the people in our show — you saw the waiters gallop. How do they dance like that? And then you hear them sing — they have these voices, some of them could be in opera. You can't believe it. And the physicality and the acting — I'm overwhelmed.

But I tell people, young people, to never copy anyone, that's all. You can be inspired by people. I had an acting teacher named David Legrant who always said there's only one of you in the world, so why would you want to copy someone else? The emotion comes out of you, you feel anger only the way you would feel it. And that's what's important — to only let it come out of your originally, and not try to copy anyone else.

Samantha Balaban and Barrie Hardymon produced and edited this story for broadcast. Patrick Jarenwattananon adapted it for the Web.