Accessibility links
State Officials Gather To Discuss How to Prevent Election Hacking State election officers from all over the country met in Washington, D.C., this weekend, and received a classified intelligence briefing on threats from foreign adversaries.

Listen · 2:41 2:41
Election Chiefs 'Straddle The Line Between Sounding The Alarm And Being Alarmist' 2:41 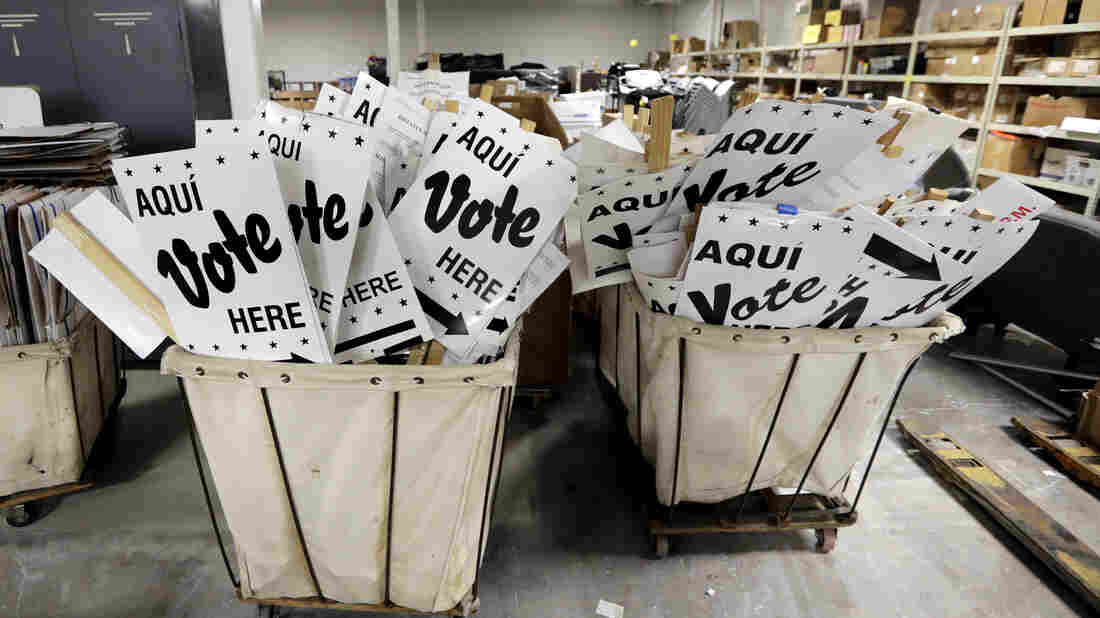 Bins of signs are seen at an election office in San Antonio, Texas. The first primaries of the 2018 elections are less than a month away, and the Department of Homeland Security held a classified briefing last week to further explain voter system threats to election directors and secretaries of state. Eric Gay/AP hide caption 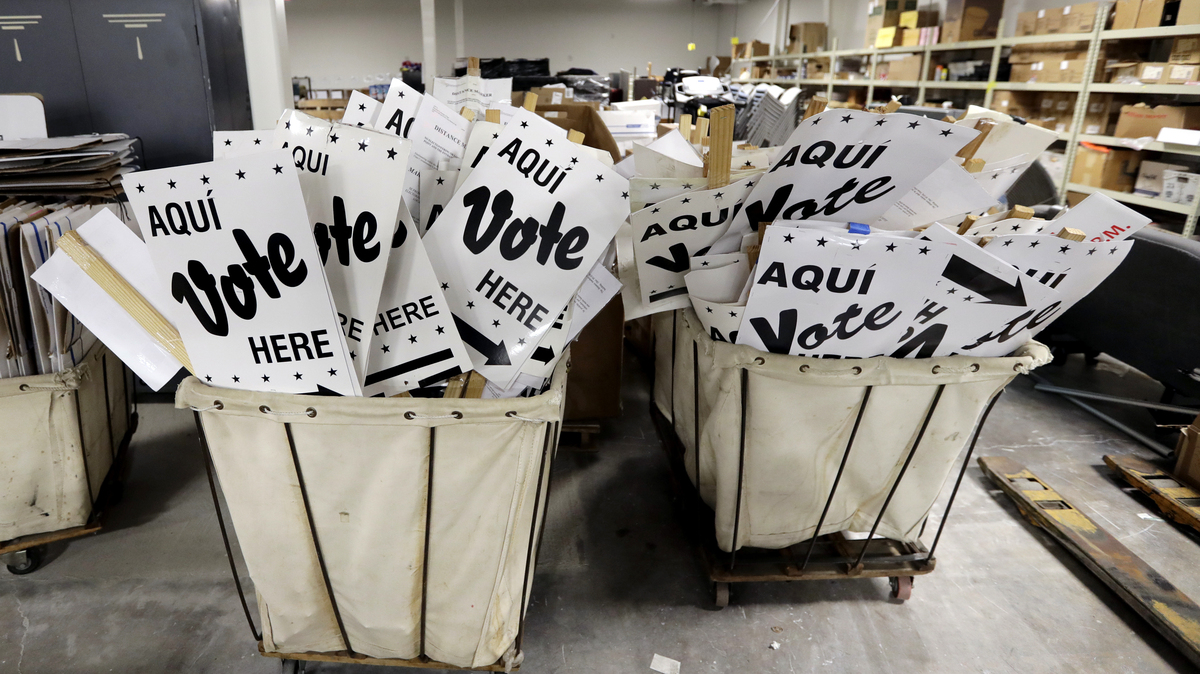 Bins of signs are seen at an election office in San Antonio, Texas. The first primaries of the 2018 elections are less than a month away, and the Department of Homeland Security held a classified briefing last week to further explain voter system threats to election directors and secretaries of state.

Top election officials from across the country grappled with a delicate question this weekend: How do you tackle the threat of election interference, and be transparent in doing so, without further eroding the public's trust in the voting process?

"I'm always trying to straddle the line between sounding the alarm on this issue and being alarmist," said Steve Simon, Minnesota's secretary of state.

The four-day annual meeting of the National Association of Secretaries of State, which featured a new classified briefing from national intelligence officials, came at the end of an extraordinary week. On Tuesday, the nation's top intelligence officials told Congress to expect Russian interference in the upcoming midterm elections and beyond.

Three days later, the Justice Department's special counsel, Robert Mueller, filed an indictment against 13 Russians, which laid out in granular detail the size, scope, and complexity of a covert Russian disinformation campaign in 2016.

"I think people understand that the threat is real and that it's not going away," said Secretary Connie Lawson of Indiana. "We've always seen security of our voting systems as a priority, it's just become a heightened priority — I think our biggest concern is that the voters understand that, so they'll have confidence in the election system."

Although the Mueller indictment did indicate that the Russian goal at a certain point became to propel Trump to the presidency, it highlighted that sowing polarization and feeding a general lack of faith in the democratic process was also important to the Russian operatives.

His state, Minnesota, was one of 21 states that the Department of Homeland Security says had its voter systems probed by Russia for vulnerabilities leading up to the 2016 election. Hackers only successfully broke into one state system, in Illinois, and did not alter any data, DHS says.

For months, however, Homeland Security officials failed to inform their election administrators in the 21 states that were targeted, which frustrated officials who said the delay hampered their effort to secure future elections.

The National Association of Secretaries of State vehemently opposed then-Homeland Security Secretary Jeh Johnson's decision to designate election systems as "critical infrastructure" last year, fearing that it was a step toward the federal government exercising more control over the voting process.

Since then however, election officials say the relationship has softened and that DHS is making an effort to streamline the process of getting relevant information into the hands of state officials. The agency is working toward getting security clearances for three officials in each state, with officials in more than 20 states already approved so far.

This weekend, national intelligence officials gave a classified briefing to the secretaries about "increasing awareness of foreign adversary intent and capabilities against the states' election infrastructure," according to a joint statement from the FBI, DHS and the director of the Office of National Intelligence.

"I do think the biggest lesson learned from DHS and the federal government in 2016 is that it's not helpful to pass the information down if you're passing it down to the wrong people," said Maggie Toulouse Oliver, the secretary of state of New Mexico, who said that communications with the federal government are drastically improved.

Still, some secretaries were less than impressed with the briefing.

"We got some new information that was interesting. Did it change the course of what we were going to do or not do [in 2018]? No," said Michele Reagan, Arizona's secretary of state, as reported by The Washington Post.

David Becker, the executive director of the Center for Election Innovation and Research, said he heard from some secretaries that "there was some frustration that some of the information wasn't really new to them, and [intelligence officials] didn't share some information that [the secretaries] really wanted to get deeper on."

"And I'm hoping those kinks get worked out," Becker said. "They need information, both to patch threats and to share it with the electorate."

On a whole, most secretaries felt the communication from the intelligence community had vastly improved over the past year.

"I've seen a real change," said Simon, Minnesota's top election officer. "I give the Department high marks for understanding the weakness in their initial approach and doing a course correction."