Accessibility links
Trump To Talk About 'School Safety,' But Will He Do Anything About Guns? The president is meeting with students and teachers about school safety this week. The White House says he supports improving background checks, but the issue has languished after past shootings. 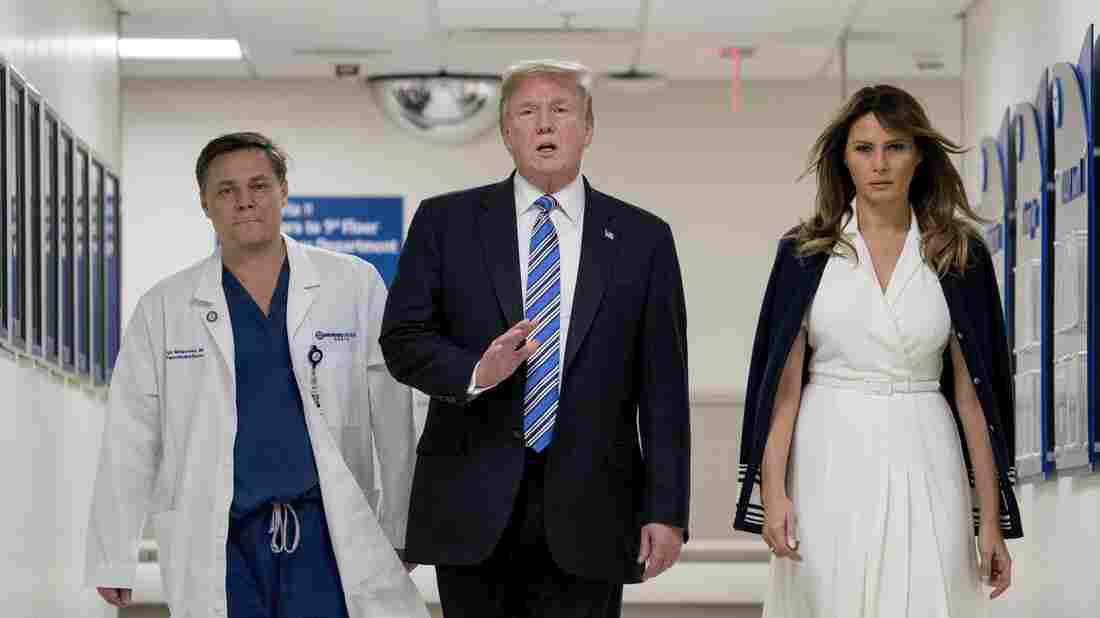 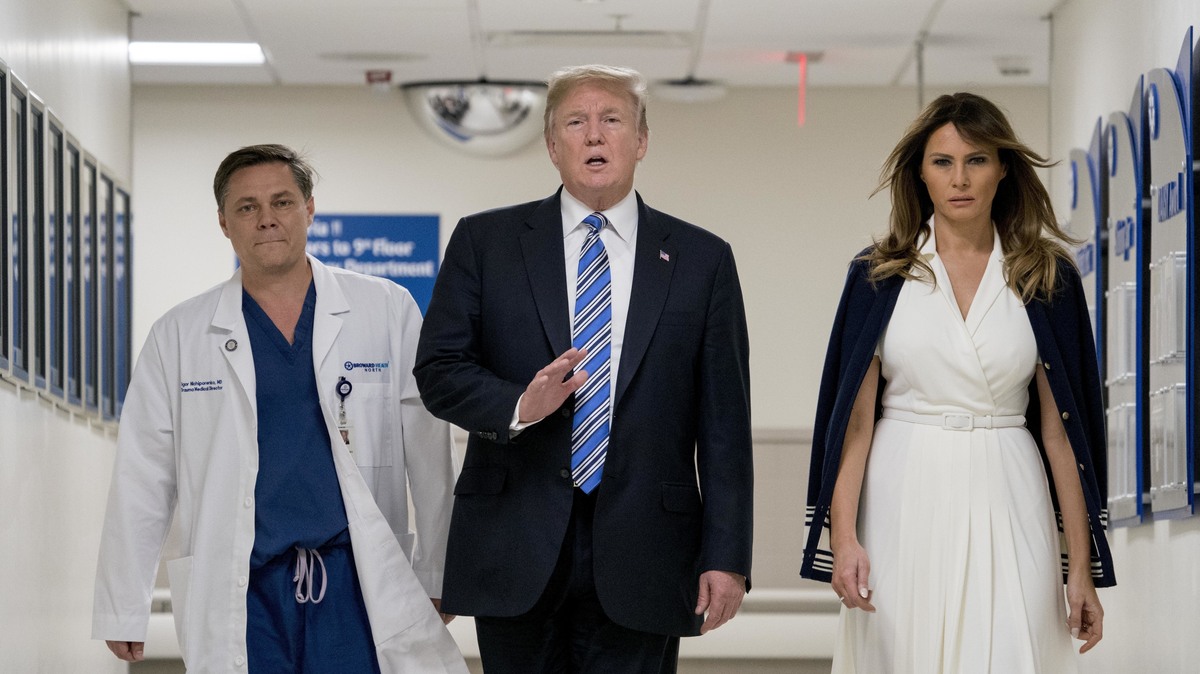 President Trump is facing calls to act in the wake of the latest mass shooting, which killed 17 people Wednesday at a high school in Florida, and the White House is not ignoring them. The president will participate in a pair of listening sessions on school safety this week, and on Monday morning the White House said he supports efforts to improve the federal background check system, something Congress has expressed broad support for without acting on after past shootings.

In both instances, Democrats called for a major push for gun control, and even some Republicans said modest changes to the nation's gun laws might be in order.

Yet, no legislation was passed.

That cycle is slightly different this time. Students from Marjory Stoneman Douglas High School in Parkland, Fla., where the shooting took place, have joined the political debate.

"Politicians who sit in their gilded House and Senate seats funded by the NRA telling us nothing could have been done to prevent this, we call B.S.," student Emma Gonzalez said at a rally Saturday. "They say tougher guns laws do not decrease gun violence. We call B.S."

Students and parents of those killed at Stoneman Douglas High School, even the conservative New York Post, have asked the president directly to take action on gun control. He didn't mention the word "gun" in an address to the nation the morning after the shooting and ignored questions from reporters about acting on guns when he visited the injured in Broward County, Fla., on Friday evening.

The president did take time on Sunday to criticize the FBI for failing to act on a lead about the alleged gunman, 19-year-old Nikolas Cruz, who police say has admitted to conducting the armed rampage with a legally purchased AR-15 rifle. Trump said the bureau has been spending too much time on the Russia probe, an apparently unrelated issue to the failure to pass the tip on Cruz to the FBI's Miami field office.

Very sad that the FBI missed all of the many signals sent out by the Florida school shooter. This is not acceptable. They are spending too much time trying to prove Russian collusion with the Trump campaign - there is no collusion. Get back to the basics and make us all proud!

Survivors of the shooting and friends of victims reacted sadly and angrily to Trump's tweet.

"Oh my god," one wrote in a retweet of the president's tweet. "17 OF MY CLASSMATES AND FRIENDS ARE GONE AND YOU HAVE THE AUDACITY TO MAKE THIS ABOUT RUSSIA???!! HAVE A DAMN HEART. You can keep all of your fake and meaningless 'thoughts and prayers'."

In addition to holding a rally and speaking out in news interviews and on social media since last week's shooting, students are organizing a nationwide walkout of students as a call to action on April 20, the 19th anniversary of the massacre at Columbine High School in Littleton, Colo.

The mother of a 14-year-old murdered at the Parkland school went on CNN and spoke directly to the camera, making an impassioned plea to Trump by name, asking him to "do something" to keep guns away from those who would carry out school shootings.

What the president will ultimately do is unclear. Without expanding on what the goal is, the White House has scheduled a listening session for the president with high school students and teachers Wednesday.

On Thursday, Trump will meet "with state and local officials on school safety." The next morning, the president will address the Conservative Political Action Conference, a group for which gun rights are a top issue. Wayne LaPierre, one of the leaders of the NRA, is also scheduled to speak.

Democrats have called for action on gun control once again, as they have after each mass shooting.

After the Las Vegas massacre, some Republicans — and even the NRA — said the regulation of bump stocks was worth revisiting. Those are accessories that are used to allow semiautomatic weapons to fire as if they were automatic; they were used by the shooter in Las Vegas.

White House press secretary Sarah Sanders was asked at the time about the president's role in possible action around bump stocks. "We want to be part of that discussion, and we're certainly open to that moving forward," Sanders said, adding that Trump is a "strong supporter of the Second Amendment."

After the November shooting in Sutherland Springs, Texas, it was discovered that records of the shooter's Air Force court-martial conviction for domestic violence were not properly entered into the national background-check system for gun purchases, and if they had, he would not have been able to legally obtain a gun. Changes to the background-check system were supported by the NRA, as well as Sen. John Cornyn of Texas, the No. 2 Republican in the Senate, who introduced a bill with Democrat Chris Murphy of Connecticut, who became one of the most visible advocates for gun control after the 2012 shooting in Newtown, Conn.

In a statement Monday morning, the White House's Sanders said, "The President spoke to Senator Cornyn on Friday about the bi-partisan bill he and Sen. Murphy introduced to improve Federal Compliance with Criminal Background check Legislation. While discussions are ongoing and revisions are being considered, the President is supportive of efforts to improve the Federal background check system."

Just like the bump stock issue, though, Congress did not take up the background check legislation in the aftermath of the shooting in Texas.

Students Who Lived Through Florida Shooting Turn Rage Into Activism

Asked about the lack of action on NBC's Meet the Press Sunday, Sen. James Lankford, R-Okla., said there may be measures that could be put in place to make it harder to get a gun for someone with the behavioral warning signs people saw in Cruz. He also noted, though, the high bar to limiting gun ownership due to the Second Amendment.

Trump signed a bill passed by Republicans in Congress last year to roll back an Obama administration regulation adding those who receive Social Security checks for mental illness and deemed unable to handle their own financial affairs to the background-check database.

Rep. Ted Deutch, D-Fla., who represents the area where last week's shooting took place, told ABC's This Week on Sunday that he's hopeful the activism of the students at Stoneman Douglas will move the debate forward.

Florida Republican Rep. Carlos Curbelo responded, in part, by saying, "We've kind of inherited this world of binary choices where we either have to repeal the Second Amendment or have no gun-safety regulations whatsoever, and younger generations of Americans don't see the world that way."

While Trump has not named any measures he would back to address gun violence since the shooting, he did point the finger at Democrats on Sunday for not enacting gun control when they controlled the White House, Senate and House — as Republicans do now.

"Because they didn't want to, and now they just talk!" was the president's response, even though Republicans blocked several Democratic proposals after the 2012 massacre at Sandy Hook Elementary School in Connecticut. (Check how your member of Congress has voted.)

Just like they don’t want to solve the DACA problem, why didn’t the Democrats pass gun control legislation when they had both the House & Senate during the Obama Administration. Because they didn’t want to, and now they just talk!

Now, as President Trump holds listening sessions with students, teachers and law enforcement, the question will be whether he sees action to take beyond talk.

An earlier version of this story stated incorrectly the numbers of people killed in Las Vegas and at a church service in Sutherland Springs, Texas. The correct numbers are 59 in Las Vegas and 26 in Texas.