Accessibility links
'Decarcerating America' Is A Powerful Call For Reform This new essay, edited by Ernest Drucker, argues that mass incarceration — more than 2 million Americans are locked up — tears at our social fabric and leaves people with no option but to reoffend. 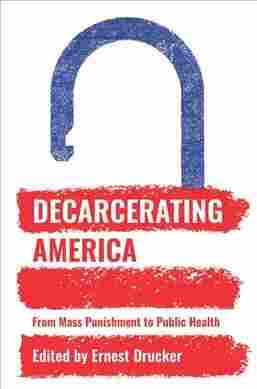 From Mass Punishment to Public Health

The United States is in the midst of an incarceration crisis — in a chapter on the failures of America's drug policy, Gabriel Sayegh writes that with 5 percent of the world's population, we hold nearly 25 percent of the "people in cages on the planet." 2.3 million people are in American prisons and jails, and, as Drucker notes, an estimated 4.7 million adults were under community supervision at the end of 2014 — "approximately 1 in 52 adults in the United States."

Statistics are particularly startling around incarcerated women. More than 65% of women in state prisons report being parents of children under the age of 18; 1 in 25 women in state prisons and 1 in 33 in federal prisons are pregnant when admitted to prison. Elizabeth Gaynes and Tanya Krupat of the Osborne Association make a chilling observation: "America's incarceration policies have led to the greatest separation of families since the end of chattel slavery."

The fallout from miscarried criminal justice tears at our social fabric. No punishment seems enough; people who have served their time are handicapped with criminal records that render them unable to obtain jobs and housing, unable to vote and rejoin society, often leaving them no choice but to re-offend. Families are destroyed and communities of color devastated.

The fallout from miscarried criminal justice tears at our social fabric. No punishment seems enough; people who have served their time are handicapped with criminal records that render them unable to obtain jobs and housing, unable to vote and rejoin society.

It cannot be overstated: structural racism undergirds the whole enterprise. "The use of criminalization as a means to target and control certain populations — particularly people of color — has been a centerpiece of U.S. drug policy since the late 1800s," writes Sayegh. Scholars and advocates have persuasively connected the dots from slavery to lynching to mass incarceration.

Drucker divides Decarcerating America into primary, secondary and tertiary "prevention" sections. For readers who are new to the ills of mass incarceration, these chapters form an accessible primer. Essays expose the dubious science underlying the drug war and the epic failure of California's tough-on-crime policies.

"We cannot incarcerate our way out violence," writes Danielle Sered, a pioneer in restorative justice, which brings together offenders and crime survivors in a safe setting where survivors can be heard. Incarceration, she writes, breeds violence. Underscoring Sered are scholar Judith A. Greene and Vincent Schiraldi, former Commissioner of Probation and Senior Advisor to the New York Mayor, who point up New York's success at lowering incarceration rates while lowering crime rates.

Sered also urges us to combat the "dehumanizing stories about young men of color," and acknowledge that our failure to tell and hear "women of color's pain compromises our ability to develop solutions that will help make all survivors whole." For it turns out that the great majority of crime survivors and people who inflict violence come from the same communities, and share like deprivations and traumas.

Johnny Cash Takes A Stand: Looking Back On His Folsom Prison Performance

Study: Locking Lots Of People Up Did Not Cause The Great Crime Drop

The essays in this volume provide a panoply of solutions for ending mass incarceration. Writers advocate for sentencing reform, including eliminating mandatory sentences, shortening sentences and an end to the practice of sending people back to prison for technical violations of probation and parole. A chapter on the value of harm reduction therapies provides data to back up its efficacy. Sered reports on the great promise of restorative justice, even for those who cause violent injury. And the Bronx Defenders has developed holistic legal services — systemic reforms that "restrict the gateways to incarceration."

We are at a critical moment in America. There is bipartisan consensus — at least at the state and local level — that mass incarceration is bad for America. The left leaning ACLU, conservative Right on Crime, bi-partisan Cut50, and a myriad of other groups large and small, advocate for criminal justice reforms in a rainbow of red and blue jurisdictions. During the last presidential election, deeply red Oklahoma voted to reclassify all drug possessions as misdemeanors, and to lower certain theft-related crimes from felonies to misdemeanors.

Decarcerating America joins a long list of books from The New Press that educate readers on the toxicity of mass incarceration — from Michelle Alexander's path breaking The New Jim Crow to Hell Is A Very Small Place, which collects the stories of prisoners in solitary confinement. For readers eager to learn more, Decarcerating America provides both a useful survey of failures and a set of forward-looking, evidence-driven solutions. It is a welcome addition to a growing field.