Accessibility links
Rick Steves Gets Uncomfortable In 'Travel As A Political Act' Your parents' favorite travel expert has made his name as a low-key, approachable, optimistic guy. But in his new book, he doesn't shy away from trouble and the ways travel makes you an outsider.

Rick Steves Gets Uncomfortable In 'Travel As A Political Act'

Rick Steves Gets Uncomfortable In 'Travel As A Political Act' 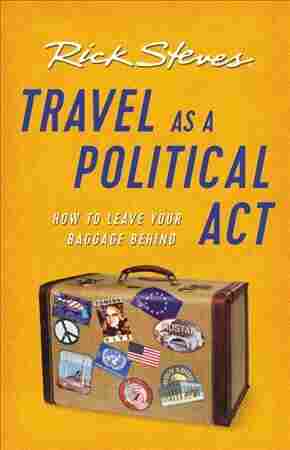 Travel As a Political Act

How to Leave Your Baggage Behind

In any given episode of Rick Steves' Europe, the world's most unassuming man smiles his way through stunning cities. It's a deeply comforting formula. We admire skylines and busy streets; Steves putters around historical monuments; he nods along as locals explain sausage or glassblowing; he signs off with a folksy "Keep on travelin'!"

The Rick Steves empire, including two TV shows, a tour company and a series of travel guides, has been nearly 30 years in the making. He has become a trusted symbol for the 21st-century traveler who wants to — very briefly — live like a local. (Success has made him no less low-key and approachable; even his bloopers are part of his brand.)

Part of that brand, by his own admission, is how easily he can move in the world as a straight white guy. He acknowledges the safe remove of privilege, and he has touched on politics in the past on his show. Still, some of his casual viewers might be surprised by Travel as a Political Act, where even the introduction talks about empire, explains that "one of the ugliest things one nation can do is write another nation's textbooks" and finishes with, "I think most Americans would be appalled if we knew how many textbooks we've written in the developing world."

This is the third edition of Travel as a Political Act (the first was published in 2009), but there is no lack of new — and newly relevant — material. Previous editions already discussed hard and soft political power, hard and soft drug policies, and the effects of past (and perhaps future) civil war. His website lists updates for this year: "the impacts of Donald Trump in the U.S., Tayyip Erdogan in Turkey, the refugee crisis, fascism and nativism, 'fake news,' and Brexit."

He's still the affable second cousin at a wedding who sits down with your parents to trade travel stories and gentle warnings. It's just that this time he's gently suggesting that Trump endangers the nation and colonialism created Europe's refugee crisis.

It's still the Rick Steves style — optimistic, peppered with slightly cheesy personal anecdotes and easing you into the fact that traveling makes you an outsider without making it scary. He is still the affable second cousin at a wedding who sits down with your parents to trade travel stories and gentle warnings. It's just that this time he is gently suggesting that Trump endangers the nation and colonialism created Europe's refugee crisis. (Tough wedding.)

In an attempt to make downer history lessons more palatable (this is, nominally, a travel book), Steves can come off as determinedly upbeat, and occasionally condescending. At a Serbian market in the chapter on "the former Yugoslavia," he describes "salt-of-the-earth couples as rustic as the dirty potatoes they pulled out of the ground that morning." In speaking of El Salvador, "the Salvadorans I met, who have so little, embrace life with a mindset of abundance." And some of his observations on particularly volatile topics verge on facile. (Iranians are just regular people, after all! His dad was afraid of Islam ... until a trip to Turkey changed his mind!)

The Don't Bother Travel Guide: 101 Places Not To Go

In Italy, A Medieval Town Confronts A Double Threat — Erosion And Too Many Tourists

But the real goal of this book is not to present anything as enticing as touring; Steves wants to examine the ways travel can — and should — change your perspective. And writing in mid-2017, he isn't concerned with keeping his callouts subtle. That "Former Yugoslavia" chapter notes "the importance of taking pluralism within your society seriously." Talking about Europe's refugee crisis, "If Europeans (or Americans) complain about the hardship of housing those refugees, they should ponder the hardship they brought about by their ancestors' greedy colonial policies a century ago." Sidebar titles include "Is Brexit Contagious? The Rise of Populism and Nativism" and "American Empire?" (He isn't beating around the bush by then: "We are our government. We cannot rest on the notion of the 'innocent civilian.' ")

They're all worthy topics, and many of Steves' asides are practical, but some chapters offer more effective perspectives than others. Sections on socialism in Europe and Erdogan's effect on Turkey are reasoned and comfortable — a marked difference from visits to Iran and Israel and the Palestinian territories, where, despite a focus on individual kindnesses, Steves clearly finds himself stymied by cultural and political complexities. (The fact that he openly admits it doesn't make the more uncomfortable or tone-deaf sections any easier to read.)

Still, he writes, his ultimate experience isn't enlightenment, but "a creeping discomfort about my confidence in the way I've always viewed the world." And that is the heart of this book. In itself, nothing here is revolutionary — these are observations of places, pitched to people who wouldn't dream of going there. What stands out in this edition is Steves' urgent concern about recent political shifts (Trump, Turkey, Brexit), and his attempt to connect with readers who might otherwise never have considered his points. If you're seeking in-depth political analysis, it's wiser to keep looking. But if anyone needs an affable second cousin to chat with them about how a trip abroad changed his life and could change yours too, Travel as a Political Act might be just the thing.