Accessibility links
Review: Joan Baez, 'Whistle Down The Wind' With songs written by Tom Waits and Anohni, this timely collection is concerned about the lingering negative reverberations from global discord. 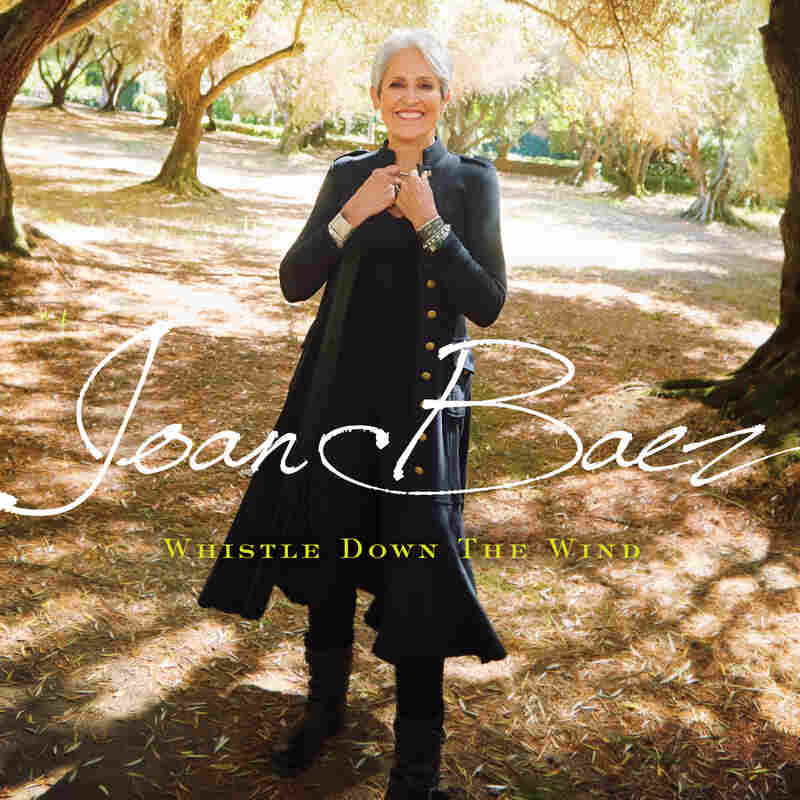 When Joan Baez was inducted into the Rock and Roll Hall of Fame in 2017, she jettisoned much of the inside-baseball career reflection usually seen in acceptance speeches. Instead, Baez connected the dots between the folk scene from which she emerged, her life-long dedication to the nonviolence movement and political activism, and how vital it is to repair today's divisive society.

"And now, in the new political and cultural reality in which we find ourselves, there's much work to be done," she said. "Where empathy is failing, and sharing has become usurped by greed and lust for power, let us double, triple and quadruple our own efforts to empathize — and to give our resources and our selves."

Whistle Down The Wind, Baez's first studio album since 2008's Day After Tomorrow, embodies the kind of selfless, galvanizing work she mentions. The timely collection is concerned about the lingering negative reverberations from global discord, and the ways this friction trickles down and inflicts personal pain. But in a radical move, Whistle Down The Wind gives people permission to envision and seek out a better world, and beseeches them to "be of good heart" while doing so.

That last phrase comes from a Josh Ritter-penned song, also called "Be Of Good Heart." It's an inspired cover choice, as is the rest of Whistle Down The Wind's track listing, which features Baez tackling work from contemporary songwriters. She includes new discoveries — the hymn-like "The President Sang Amazing Grace," Zoe Mulford's stunning song about mourning the 2015 Charleston church shooting — alongside favored scribes: her Four Voices collaborator Mary Chapin Carpenter; Tom Waits and Kathleen Brennan; and Eliza Gilkyson.

This particular batch of folk songs amplifies Baez ever-present gift for interpretation. On the title track, which Tom Waits originally recorded for 1992's Bone Machine, her vibrato-lifted delivery is weathered with wisdom. Throughout a take on Joe Henry's "Civil War," Baez runs through a gamut of moods — wistful, grave, angry, and resigned — as she details how violence precipitates division. And on the Anohni-written "Another World," her voice sounds anguished and fragile as she sings, "I need another place / Will there be peace?" against a backdrop of fraying acoustic guitar and brushed percussion.

Joan Baez and producer Joe Henry recorded Whistle Down The Wind in just 10 days, alongside a core band of instrumentalists. The resulting music is immediate and lively, with golden acoustic guitars, stately piano and muted percussion augmented by unexpected bursts of color. The title track is punctured with an eerie quivering saw; spongy organ swells through "Be Of Good Heart"; and upright bass and gut-string guitar lends a country edge to the honky-tonk slow dance that's Gilkyson's "The Great Correction."

Baez has always covered contemporary artists, but with a looming semi-retirement — 2018 is said to be her "last year of formal extended touring" — this album could be seen as her anointing the next generation to carry on her legacy. Yet that would imply she's ready to pass on the torch, and Whistle Down The Wind is by no means a farewell. Baez more than clears that up with a tenacious cover of Tom Waits' "Last Leaf," in which the leaf in question declares, "The autumn took the rest but they won't take me."

That shouldn't be a surprise. At another point during her Rock Hall acceptance speech, Baez said, "What has given my life deep meaning and unending pleasure has been to use my voice in the battle against injustice. It has brought me in touch with my own purpose." This purpose has never faltered, in large part because she refuses to let cynicism derail her determination.

That defiant optimism is evident in spades throughout Whistle Down The Wind. Even "The Great Correction," which despairs at humanity's selfishness and myopia, still contains the sentiment, "Still got hope in this heart of mine." It's inspiring enough that Whistle Down The Wind represents Baez adding her voice to the resistance. That her idealism remains intact — and these protest songs still contain glimmers of hope despite steep odds — ensures the album is also deeply empowering.