Accessibility links
Long-Lost Babe Ruth Interview Discovered In Prep School Archives The interview is part of a collection donated to Cheshire Academy 20 years ago by broadcaster Joe Hasel. A Ruth historian tells NPR the recording offers some new insights about the ballplayer. 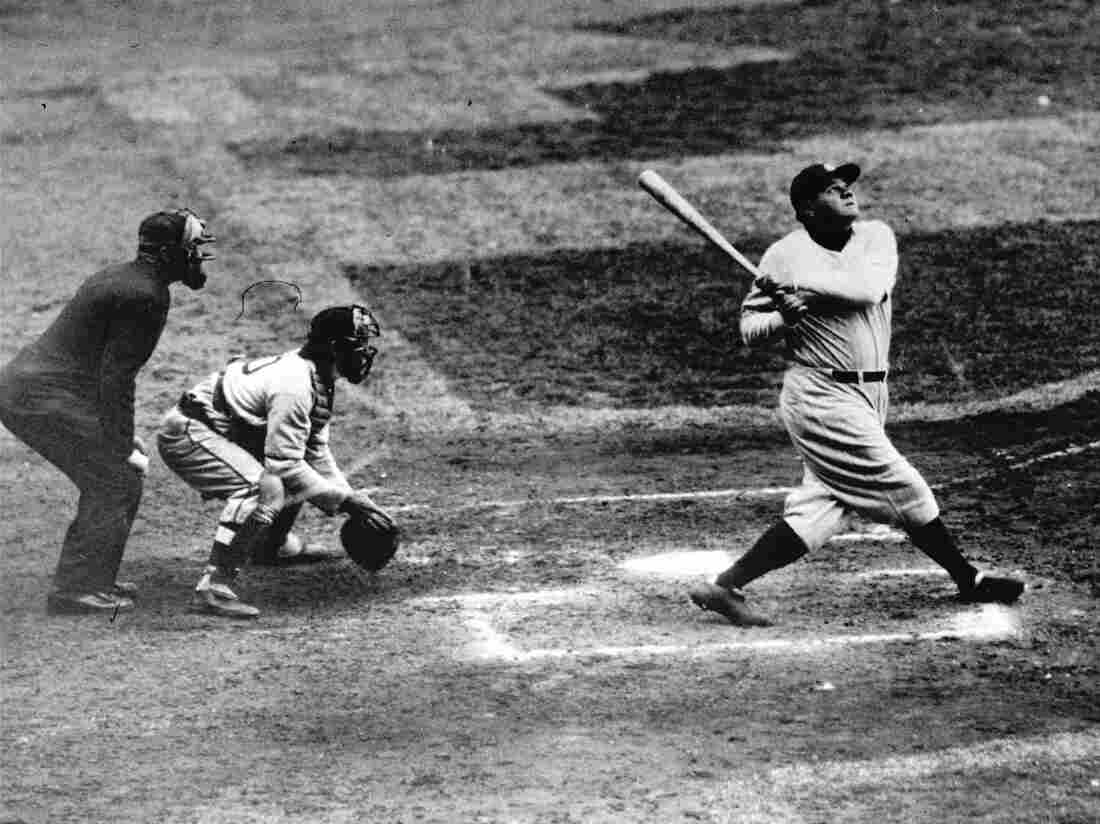 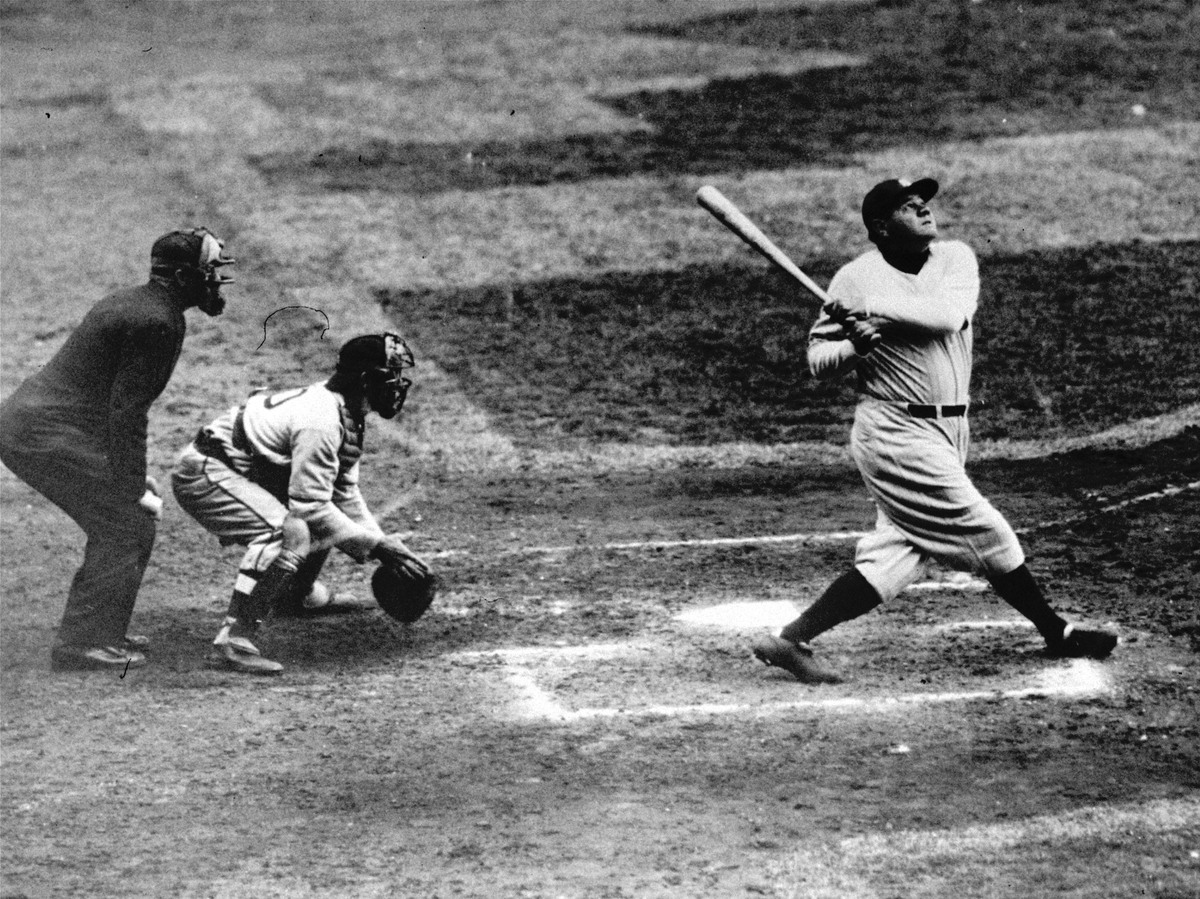 Babe Ruth clouts a towering home run during his time with the New York Yankees.

Seventy years after Babe Ruth's death, a long-lost radio interview with the baseball legend has turned up in the archives of Cheshire Academy, a private school in Connecticut. It's part of a collection of interviews donated two decades ago by sports announcer Joe Hasel, an alumnus of the school.

The 13-minute recording was made during World War II, part of a series of Hasel's sports interviews broadcast by the Armed Forces Radio Service.

In the interview, Ruth shared details with Hasel that even sports historians didn't know, like how he gripped his bat.

"I used to always bat different" Ruth told Hasel, "because I'd always put my little finger on the knob of the bat so I could do the follow-through on my swing."

Here, he's asked about the length of his bat and talks about how much he loved fastballs:

Brian Otis, who serves on Cheshire Academy's Board of Trustees and helped facilitate the donation, says Hasel never made clear who or what were on the tapes. In fact, Otis thought they were a collection of Hasel's play-by-play broadcasts.

Here, Ruth describes how he got his nickname:

"One of the coaches there said..."

He also talks about which hitters gave him the most trouble as a pitcher:

(The "Jackson" he refers to is "Shoeless Joe" Jackson, says historian Michael Gibbons.)

"[Hasel] talked about experiences of calling games at the Cotton Bowl, boxing matches in Madison Square Garden," Otis remembers. "Had I known then what I now, I would have been more thorough and spent more time with Joe."

The recordings were preserved on a long obsolete type of electronic transcription disc that was common among broadcasters in the 1940s. They look like large records, but are too big to fit on record players. "I didn't know where you get the equipment to even play the stuff," says Otis. 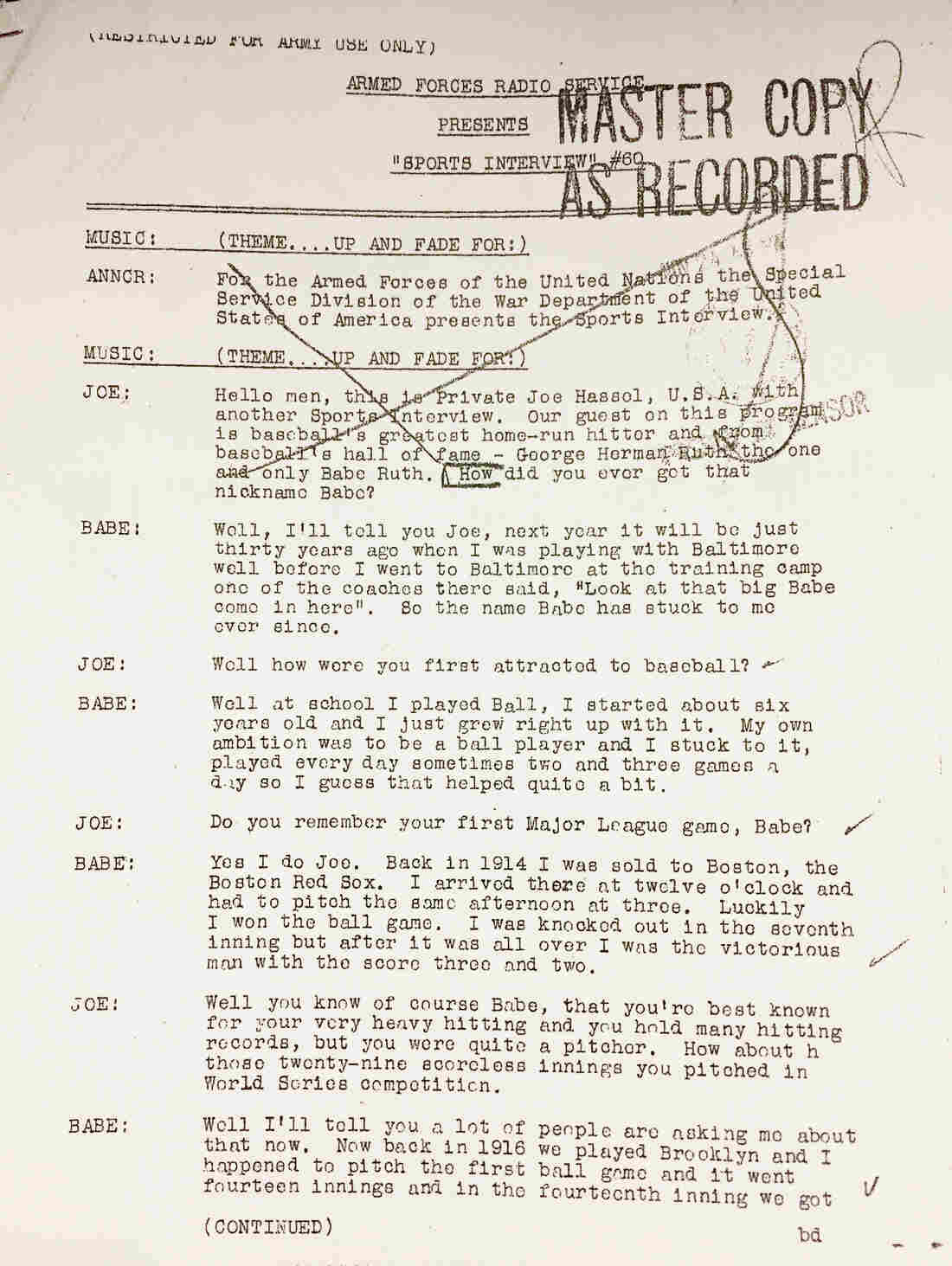 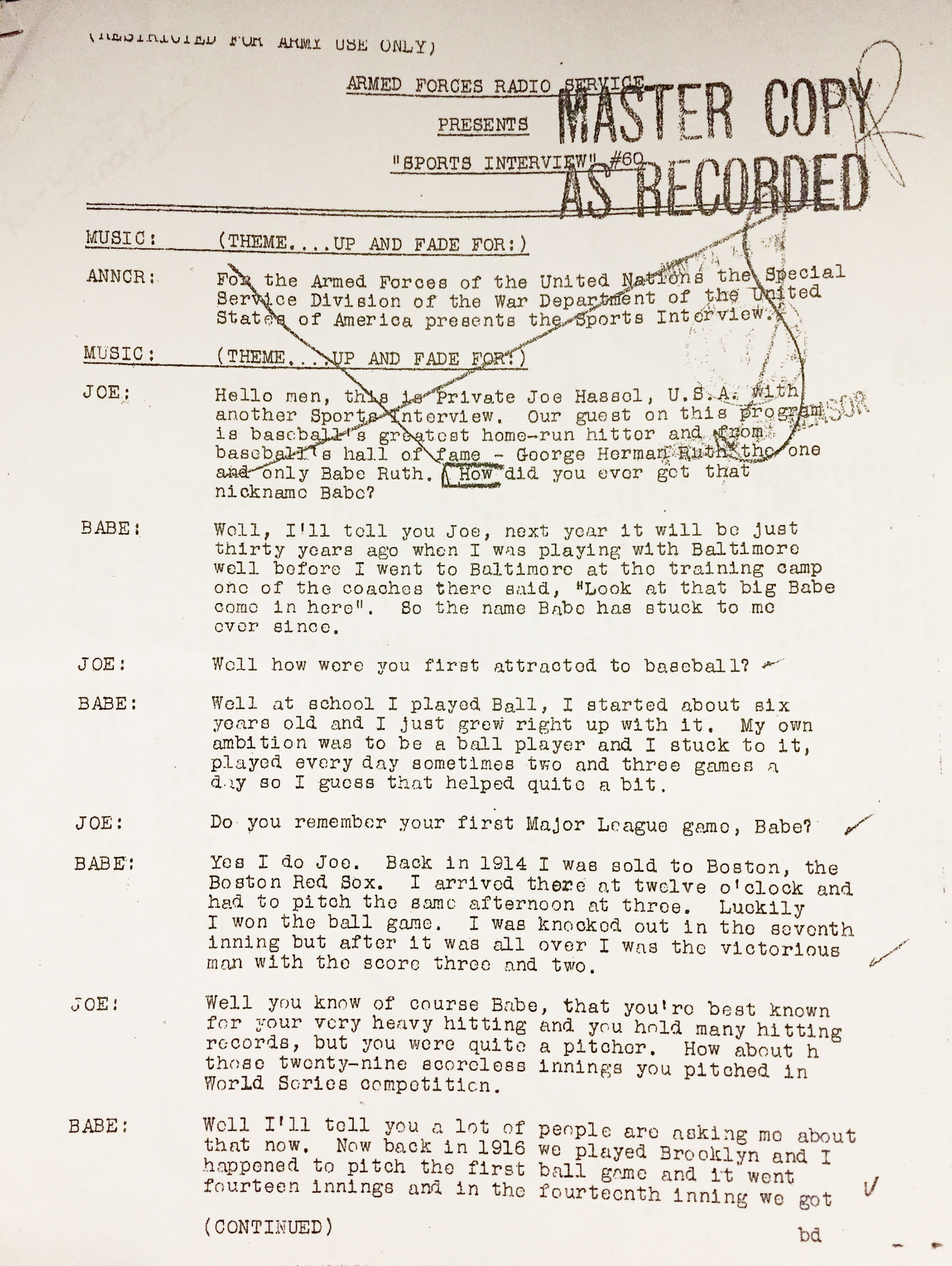 Transcription of the interview between Babe Ruth and sports broadcaster Joe Hasel, who donated the recording to Cheshire Academy as part of a collection.

So they didn't. The recordings sat in the school's archives for two decades. When they were finally digitized, they turned out to be Hasel's interviews with many of the greatest athletes of the day, including boxer Jack Dempsey, ballplayer and manager Casey Stengel, football coach Pop Warner ... and The Babe.

Historian Michael Gibbons, director emeritus at the Babe Ruth Birthplace Foundation in Baltimore, says Ruth did plenty of interviews in his lifetime but this discovery offers new insights. "The way that he positioned his feet in the batter's box. I have never heard that really discussed before," Gibbons says.

Here's how Ruth described it to Hasel:

"Well, I'd always put my front foot toward the home plate and the back foot back a little bit so I'd give ya a perfect pivot," he said.

Another new detail, Gibbons says, is the fact that The Babe says he was superstitious.

"Well I guess I was and everybody knows it," Ruth said. "I always touched second base going in from the infield to the outfield and vice versa." 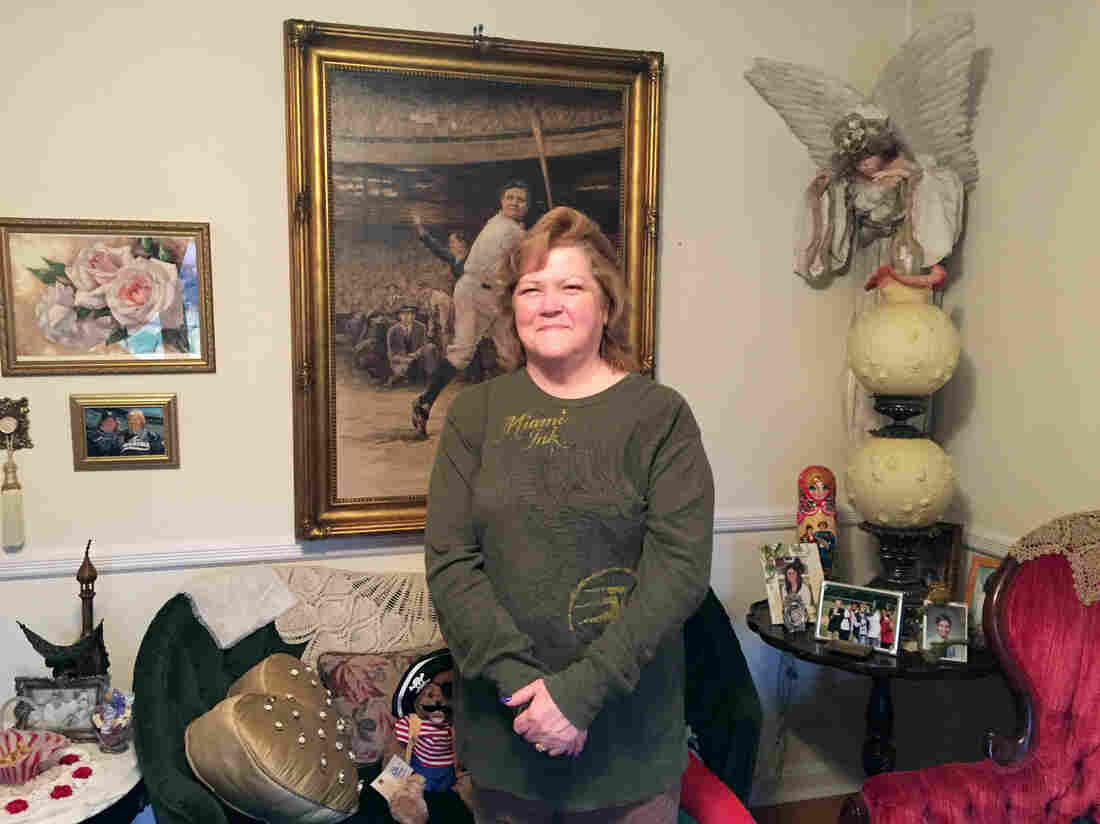 Linda Ruth Tosetti stands in her living room, in front of a painting of her grandfather, the legendary baseball player Babe Ruth. Diane Orson/WNPR hide caption 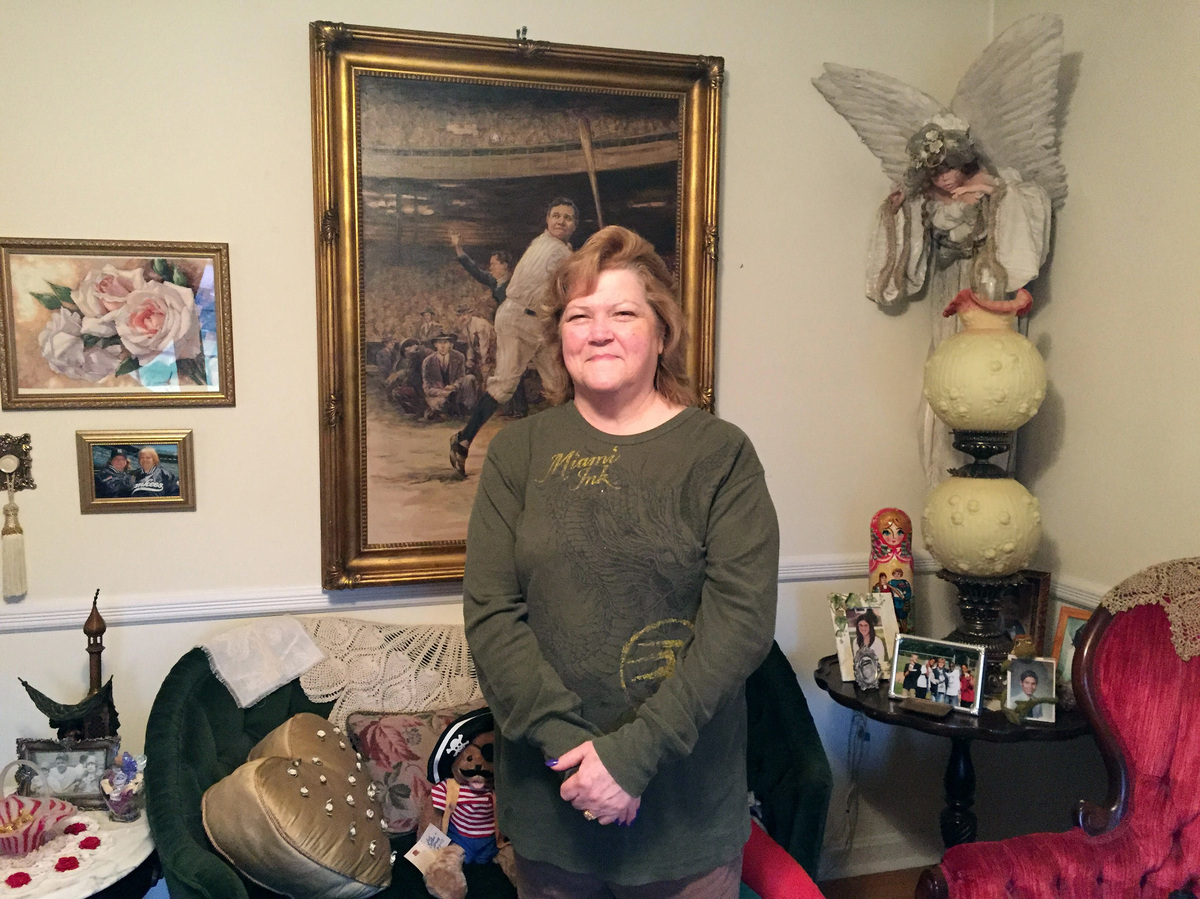 Linda Ruth Tosetti stands in her living room, in front of a painting of her grandfather, the legendary baseball player Babe Ruth.

Ruth was long retired by the time of the 1943 interview, and he died five years later. Still, anytime something new involving the star comes along, it generates interest. Gibbons says that's partly because his domination of the sport of baseball in the 1920s came to be seen as emblematic of the spirit of America itself.

"Everything that he did on the ballfield was almost godly," he says. "America was kind of filling up with itself. And Babe Ruth was a great symbol of that burgeoning power that was the United States."

The new recording doesn't delight just Ruth historians. His granddaughter Linda Ruth Tosetti says the newly discovered recording "is amazing, because it's another contact with him."

Tosetti's living room is filled with Babe Ruth photos and memorabilia. She serves as sort of a roving spokeswoman for the Ruth family, traveling the country, throwing out pitches at games, autographing baseballs and talking at local libraries. With this new interview, she knows a little more about how The Babe played the game so well.