Accessibility links
A Masterful Glimpse Of Humanity's Physical — And Emotional — 'Annihilation' Alex Garland's disquieting sci-fi/horror film isn't just a meditation on fatalism (but it is that), it's an "atom bomb of a movie, fiery and all-consuming and quite unnatural." 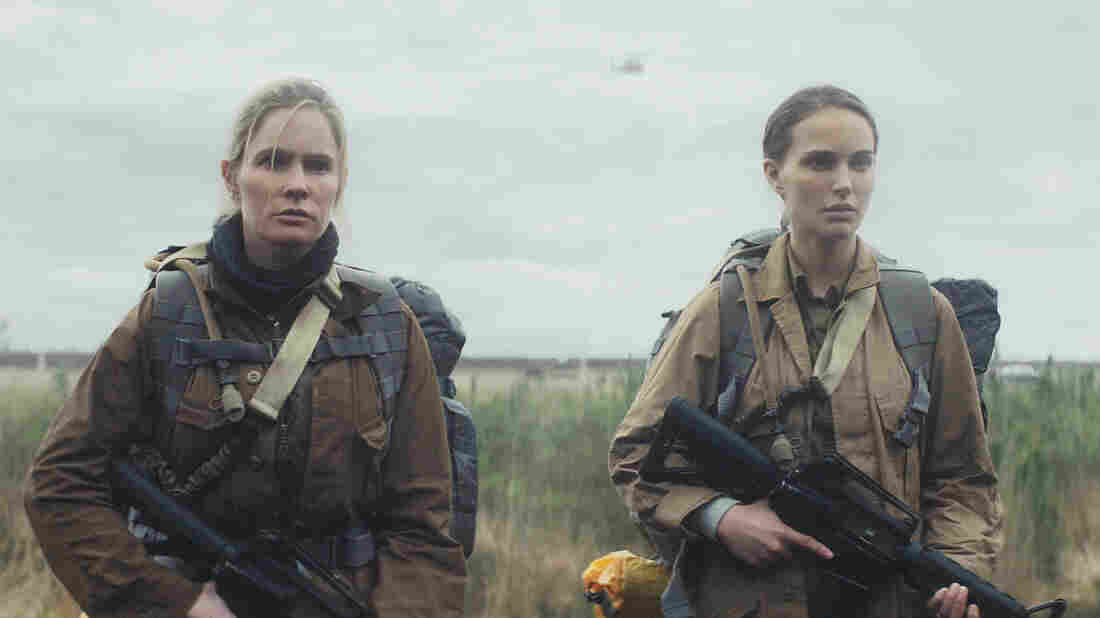 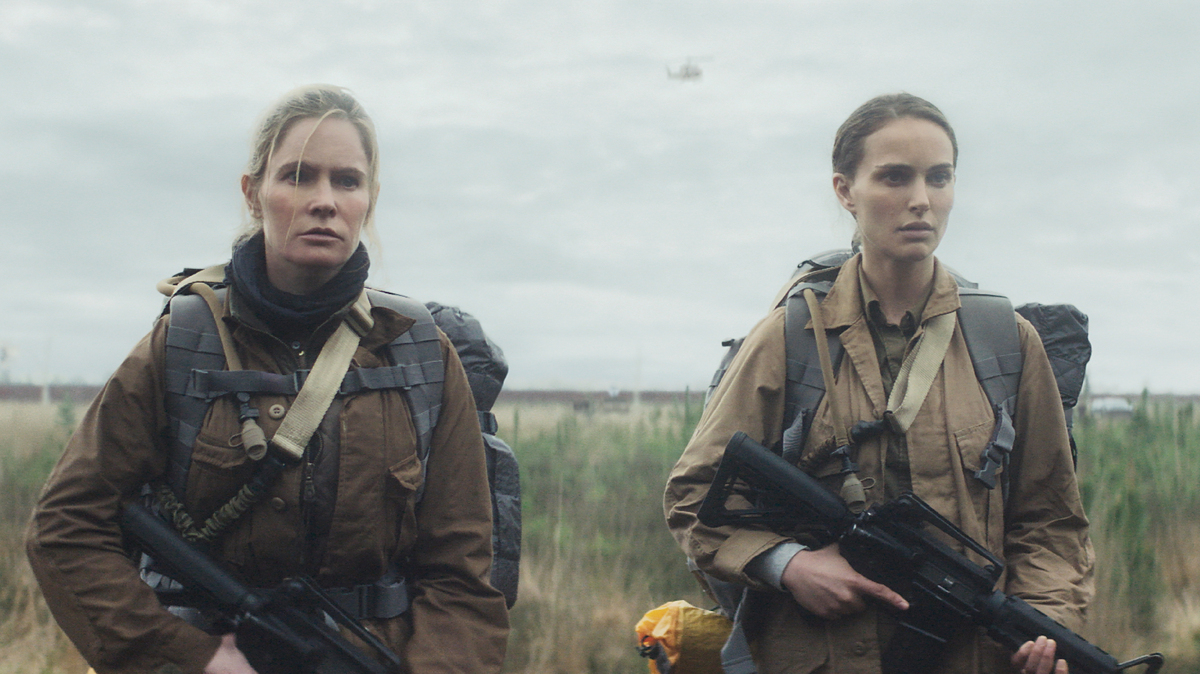 The alien dome they call "The Shimmer" stretches for several miles, radiating from a lighthouse in the middle of a national park. Its border is pulsating and translucent with shades of purple, like a soap bubble; it's so alive it seems to moan, or at the least to breathe. No messages from within can reach the outside world. Those who enter don't come back out, or not the same, anyway. And the first time one expedition sets up camp, they awake to find that they have already been there for days, with no memory of what transpired in-between.

Actually, when all is said and done, the unaccounted-for time winds up being the least consequential Weird Thing that happens in the new sci-fi/horror movie Annihilation. But it might haunt the longest, because the dazed and disoriented state that greets Natalie Portman's hero when she wakes up to this gap in her memory is a pretty good account of what watching Annihilation is like. Writer-director Alex Garland has made an atom bomb of a movie, fiery and all-consuming and quite unnatural. It fills every inch of our heads with its beautiful terrors. Sure, its power is nearly all sensory, but its cells keep dividing regardless.

Garland was heralded in film circles for his 2014 robotics experiment Ex Machina, a film whose grand ideas often seemed the wrong match for its own tech-bro mindset. But here his ambition actually matches his environment.Working from the bestselling 2014 novel by Jeff VanderMeer, Garland hasn't so much adapted the source as mutated it: same basic building blocks, deconstructed and rebuilt in new and horrifying ways. A biologist named Lena (Portman) who specializes in cellular cancers is summoned to the site of The Shimmer, which the government has been keeping under wraps for three years as it's tried and failed to peep inside the ever-expanding void. Lena's husband Kane (Oscar Isaac) was one of the Army folk on the last attempted mission, and disappeared for a year before re-emerging on her doorstep with a serious illness and no memory of who he is. So when the opportunity comes to join the latest expedition into the void — an all-but-certain suicide mission, which the film underlines in a way that's different from how other movies define that term — Lena goes, out of a sense of duty or maybe just hopelessness.

This latest team is all women, dispatched into the unknown only once too many men have been lost. (Though the film barely has a political bone in its body, it's hard not to think of the world today all the same.) Led by a pithy psychologist (Jennifer Jason Leigh), Lena joins three other devil-may-care specialists (Jane the Virgin's Gina Rodriguez, A War's Tuva Novotny and soon-to-be superstar Tessa Thompson). As in Sunshine, a film Garland wrote, all five accept that they likely won't emerge alive. But is their sacrifice out of nobility, or something else? "All humans self-destruct in some way," Leigh's psychologist says, and the actors walk a careful line of nuance in their performances that allows the self-destruction to blot out easy heroism. Most action-movie cowboys are told they will die, yet their bullheadedness keeps them alive. But Portman, working with only broad strokes of a background and doing a lot of work in her face and gaze, seems to be surviving only on the strength of her pain.

Beyond the Shimmer lie spoilers, but know that the film presents all the frights with a mesmerizing air that makes them more than just cheap thrills. Even when we're holding our breath over some creature in the shadows or a horribly mangled corpse, we're in awe of the pastel color schemes, the sweeping forestry, and the careful, precise rendering of biological nightmares. More than anything else, Annihilation is a triumph of technique. Geoff Barrow and Ben Salisbury's industrial-strength dissonant score uproots us (though it dips into quiet, acoustic tones for the truly shocking moments) while Mark Digby's production design and Rob Hardy's cinematography seem to always position us so that there is nowhere to plunge but deep into the most terrifying part of the landscape.

It would be wrong to say we've never seen anything like Annihilation before. Truth be told, the film owes a massive debt to Andrei Tarkovsky's Stalker, another descent into the unknown that used quiet beauty as an instrument of terror. Tarkovsky benefitted far more from powers of suggestion than Garland even attempts (this film stages an explicit, uncut digital video sequence that might leave you feeling sick and used). But what Annihilation lacks in subtlety, it makes up for in meditations on fatalism: The more it reveals, the more acutely we become aware of bodies, minds and organisms powerless to their own environments, always breaking down, never at peace. It's enough to lose track of time, and maybe of Earth, too.