Accessibility links
Trump Appears To Read From The NRA's Script Hours After A Wayne LaPierre Speech The president held another meeting on the subject of school safety after 17 people were killed last week in a shooting at a Florida high school. 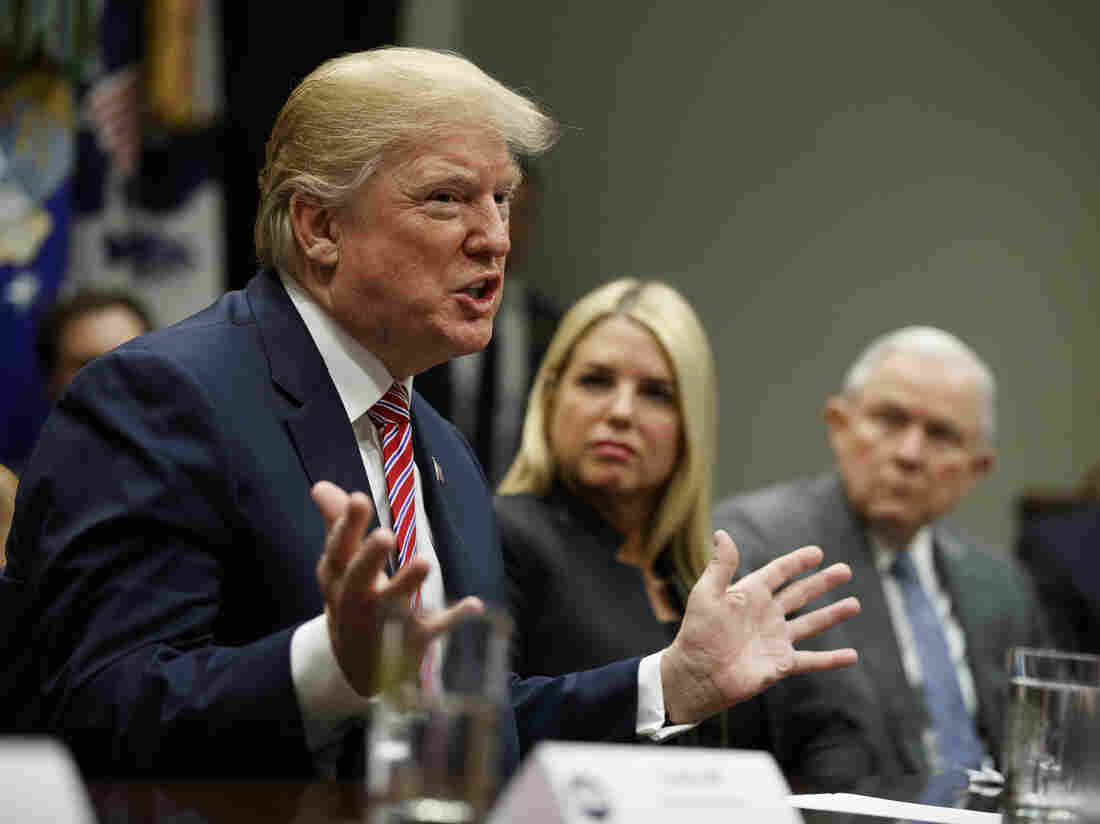 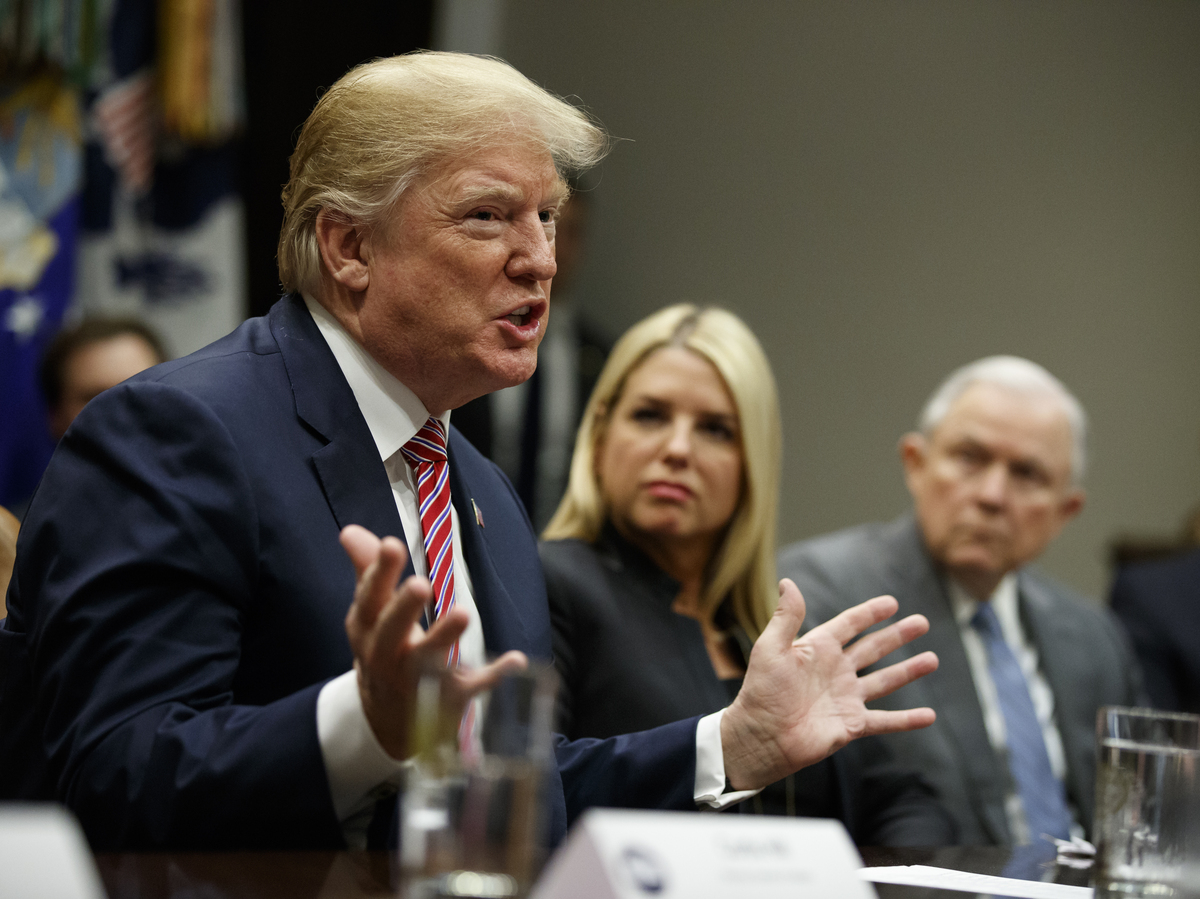 In trying to clarify his Wednesday comments about arming teachers and other school personnel, President Trump, a day later, aligned himself even more closely with the National Rifle Association on the issue of teachers with guns and beefing up school security.

So much so, they seemed, at times, to be reading from the same script.

Here's how the day started — with NRA Executive Vice President and CEO Wayne LaPierre at the Conservative Political Action Conference, or CPAC (emphasis ours):

"Can we protect so much with armed security, while we drop our kids off at school, that are so-called gun-free zones, that are wide-open targets for any crazy madman bent on evil to come there first? There first? In every community, PTAs, teachers' unions, local law enforcement, moms and dads – they all must come together to implement the very best strategy to harden their schools, including effective trained, armed security that will absolutely protect every innocent child in this country. That has to happen now. Evil walks among us, and God help us if we do not harden our schools and protect our kids. ...

"I refuse to leave this stage until I say one more time that we must immediately harden our schools. Every day-- every day, young children are being dropped off at schools that are virtually wide open, soft targets for anyone bent on mass murder. It should not be easier for a madman to shoot up a school than a bank or a jewelry store or some Hollywood gala. Schools must be the most hardened targets in this country."

Hours later, Trump was at the White House talking about school safety after last week's mass shooting at a Parkland, Fla., high school. Notice, Trump used some of the same talking points, key words and phrases as LaPierre (again, emphasis ours):

"We have to harden our schools, not soften them. A gun-free zone to a killer or somebody who wants to be a killer, that's like going in for the ice cream. That's like 'here I am, take me.' We have to get smart on gun-free zones. When they see 'this is a gun-free zone,' that means that nobody has a gun except them, nobody's going to be shooting bullets in the other direction. And they see that, it's such a beautiful target. They live for gun-free zones.

So when it comes to "hardening" schools, not a phrase that was in wide use before Thursday, and speaking out against "gun-free zones," it appears the president and the NRA are, well, on the same page.

Trump does appear, however, to differ with the gun lobby when it comes to his support of increasing the age to be able to buy an assault rifle, from 18 to 21. Trump said he wasn't concerned, though, about that.

And then in his next sentence, he may have given away the reason he and the NRA seem to be using similar, and sometimes the exact same, language.

"I've spoken to them often in the last two days," Trump acknowledged, "and they want to do the right thing."

Trump also reiterated his calls for arming more teachers and other adults working in the nations' schools, something LaPierre also called for. But Trump has made several conflicting statements on the controversial issue over the course of less than 24 hours beginning Wednesday.

At White House listening sessions Wednesday with students and parents, including some from Marjory Stoneman Douglas High School, where a gunman killed 17 people last week, Trump said, "If you had a teacher who was adept at firearms, it could very well end the attack very quickly."

But Thursday morning, the president put out a barrage of tweets, defending himself and clarifying, "I never said 'give teachers guns' like was stated on Fake News." He added that he wanted to look at the possibility of giving "concealed guns to gun adept teachers with military or special training experience."

I never said “give teachers guns” like was stated on Fake News @CNN & @NBC. What I said was to look at the possibility of giving “concealed guns to gun adept teachers with military or special training experience - only the best. 20% of teachers, a lot, would now be able to

....immediately fire back if a savage sicko came to a school with bad intentions. Highly trained teachers would also serve as a deterrent to the cowards that do this. Far more assets at much less cost than guards. A “gun free” school is a magnet for bad people. ATTACKS WOULD END!

....History shows that a school shooting lasts, on average, 3 minutes. It takes police & first responders approximately 5 to 8 minutes to get to site of crime. Highly trained, gun adept, teachers/coaches would solve the problem instantly, before police arrive. GREAT DETERRENT!

I will be strongly pushing Comprehensive Background Checks with an emphasis on Mental Health. Raise age to 21 and end sale of Bump Stocks! Congress is in a mood to finally do something on this issue - I hope!

In his subsequent White House meeting Thursday with state and local officials to discuss schoool safety, Trump expanded on that.

"I don't want teachers to have guns," he said. "I want certain highly adept people, people that understand weaponry, guns. If they really have that aptitude, because not everybody has an aptitude for a gun. I think a concealed permit for teachers and letting people know there are people in the building with a gun, you won't have, in my opinion, you won't have these shootings."

An armed guard was present at the Florida high school last week, but resigned Thursday after video footage showed that he never went inside the building to engage the shooter.

"He never went in," Broward County Sheriff Scott Israel said at a news conference Thursday. "Devastated. Sick to my stomach" is how Israel described how he felt when he learned the school resource officer didn't engage the shooter. "There are no words. I mean, these families lost their children."

The idea of arming teachers, while pushed by the NRA, is opposed by the nation's largest teachers union. In a statement, National Education Association president Lily Eskelsen Garcia said:

"Bringing more guns into our schools does nothing to protect our students and educators from gun violence. Our students need more books, art and music programs, nurses and school counselors; they do not need more guns in their classrooms. Parents and educators overwhelmingly reject the idea of arming school staff. Educators need to be focused on teaching our students. We need solutions that will keep guns out of the hands of those who want to use them to massacre innocent children and educators. Arming teachers does nothing to prevent that."

"I'll be honest with you," Trump said. "If I'm a child, I'm 10 years old, and they say, 'We're going to have an active shooter drill,' I say, 'What's that?' 'Well, people may come in and shoot you.' I think that's a very negative thing to be talking about, to be honest with you. I don't like it. I'd much rather have a hardened school."

The president also shifted blame from guns to violent movies and video games. They are "really shaping young people's thoughts," Trump contended, reminding of the national debate after Columbine in 1999. The shooters at Columbine listened to the music of rocker Marilyn Manson, popular with high-schoolers all over the country at the time.

"The Columbine era destroyed my entire career at the time," Manson told The Guardian this past September.

Trump claimed Thursday, "You see these movies, and they're so violent and yet a kid is able to see the movie if sex isn't involved."

He then called for a ratings system, something that has long existed for movies and video games.

"My friends and I have been playing video games our whole lives, and seen, of course, violent movies," Samuel Zeif told CNN, "but never have we ever felt driven or provoked by those action in those games to do something as horrible as this."

"I grew up playing video games," Grady said, citing Call of Duty and other first-person shooter games. "I would never, ever dream of taking the lives of any of my peers.

"So it's just pathetic."