Accessibility links
'Mute' Is 'Blade Runner' Without An Edge Director Duncan Jones' latest film, a direct-to-Netflix sci-fi/noir tale set in a dystopian Berlin, so narrowly focuses on its hero's traumatic backstory it neglects its fantastic setting.

'Mute' Is 'Blade Runner' Without An Edge

'Mute' Is 'Blade Runner' Without An Edge 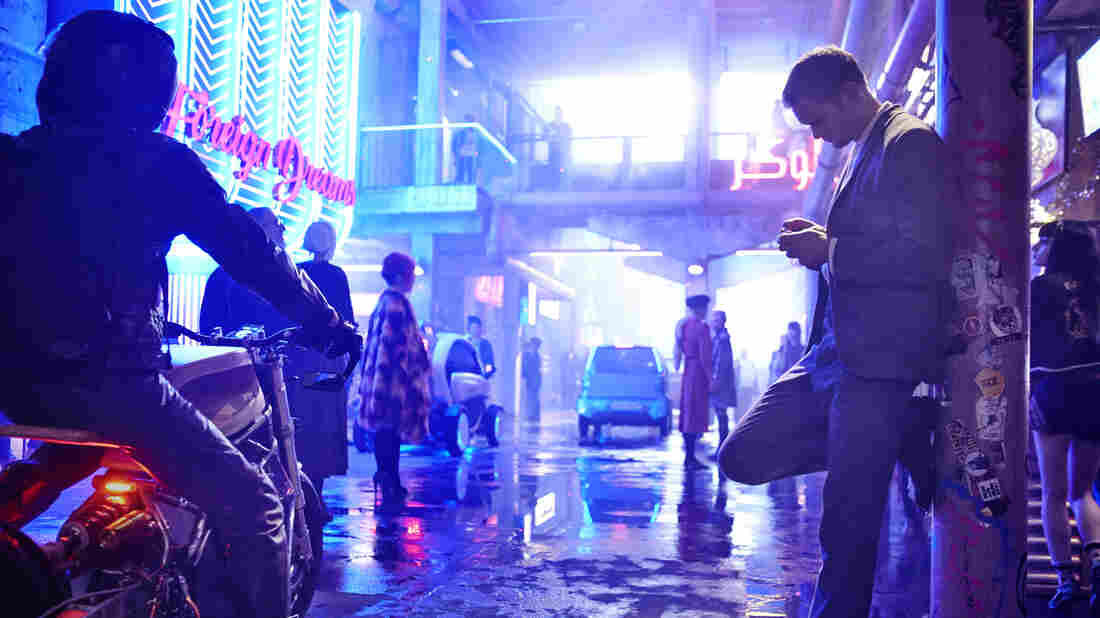 In Mute, Alexander Skarsgård plays Leo, a mute bartender searching for his lost girlfriend. The film is Duncan Jones' return to the kind of moody Sci-Fi that marks his early work. Keith Bernstein/Netflix hide caption 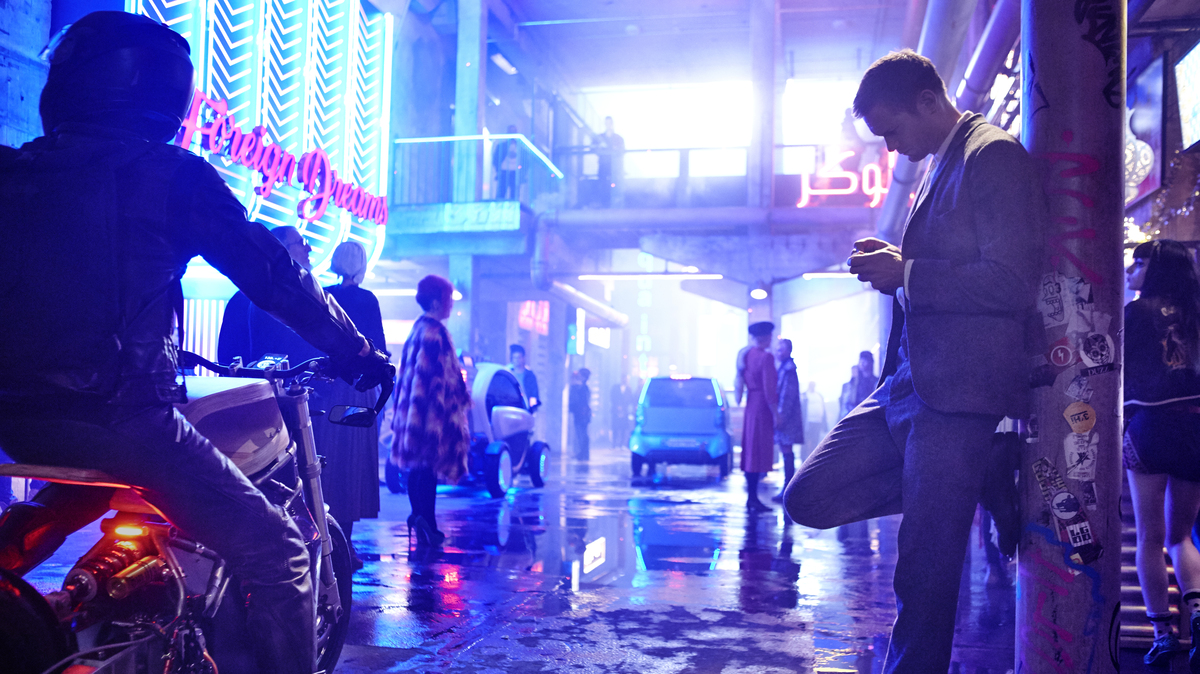 In Mute, Alexander Skarsgård plays Leo, a mute bartender searching for his lost girlfriend. The film is Duncan Jones' return to the kind of moody Sci-Fi that marks his early work.

Over the past few months, the roll-out of several high-profile Netflix releases has revealed a predilection for expensive, hard-edged, futuristic genre fare, starting with the human-alien buddy picture Bright, continuing with the TV series Altered Carbon and the surprise post-Super Bowl unveiling of The Cloverfield Paradox. None of them opened to much critical acclaim and Netflix is notoriously cagey about sharing its numbers, but the company has found a niche market that its algorithm can reinforce. The world of Blade Runner may not be the future, but a network where every program mimics Blade Runner has arrived in the present.

To satisfy this niche, it was a good idea to turn to director Duncan Jones, who started his career with Moon and Source Code, two clever and self-contained sci-fi puzzle pictures that have the resourcefulness to draw maximum tension from mostly one location. Jones considers his new Netflix film, Mute, a spiritual sequel to Moon — that film's star, Sam Rockwell, turns up briefly in character on TV — but he opens the world up considerably, imagining what Berlin will look like 40 years from now. As it happens, it looks almost exactly like the Los Angeles of Blade Runner, a nocturnal techno-state with flying cars, ubiquitous electronic advertisements, and a permanent noir-inflected shroud. Mute may be a bigger vision than Moon and Source Code, but it's narrower where it counts.

Roughly speaking, Mute is basically Taken as a sci-fi thriller, sending Leo (Alexander Skarsgård), a mute bartender who speaks with his fists, on a bone-crunching mission to find the person or persons responsible for abducting his girlfriend Naadirah (Seyneb Saleh). In one strange detail in a film full of them, Leo lost his voice in a childhood boating accident and his Amish family refused to consent to surgery to restore his shredded vocal chords. Now he's an analog freak in a debased tech underworld filled with cosmopolitan mafia thugs, black market hackers, prostitutes, and sex robots. In his spare time, he whittles.

Meanwhile, Jones also follows the at-some-point-related adventures of "Cactus" Bill (Paul Rudd) and Duck (Justin Theroux), two American surgeons with military backgrounds who do procedures for mobsters who can't have their injuries treated in hospitals. (They're also available for creative torturing, so the Hippocratic oath is only loosely applied.) Berlin has become a purgatory for non-citizens like Bill and Duck, and Bill is prepared to go to drastic lengths to secure documentation for himself and his daughter, whose babysitters are mostly just a succession of hookers. Leo and Bill are casually acquainted, but circumstances draw them closer together.

Like many sleuthing narratives, Leo's solemn trek from one address and lowlife to another presents an opportunity to unpack the world around him, but Jones curiously turns inward. From headlines and news clips, we realize that America is still fighting the war in Afghanistan — one news item mentions a place called "New Kandahar" — but that's all background noise, as are any questions about how Berlin came to be a broken-down way-station for immigrants or how the social or political scene has shaped up.

Jones isn't required to address any of these issues, of course, but his focus on the personal aspects of the story make Mute seem like a mammoth production in service of a puny vision. Mute isn't about what the world will look like in 40 years, but about a lonely, good-hearted man who suffered family-related trauma at an early age and is seeking to be made whole again. A film featuring flying cars and gonzo military surgeons and robot strippers is an awfully complicated apparatus to sustain a sentimental treatment of cruel parents and neglected children.

There are flashes of inspiration here and there, most of them coming from Rudd's performance as a scoundrel with a stash whose wisecracking rapport with Theroux calls back to Donald Sutherland and Elliott Gould in M*A*S*H. A scene where Rudd grudgingly walks three feet to order a cappuccino echoes his cafeteria breakdown in Wet Hot American Summer and Jones gives him the space to put a little mustard on his line-readings. Even dystopias can accommodate a few good laughs.