Accessibility links
Trump Trade Action Could Boost Steel, Aluminum Manufacturers, Hurt Other Industries President Trump is weighing tariffs or quotas on steel and aluminum imports. But a backlash is brewing from aerospace companies and other manufacturers, who say such moves will drive up costs. 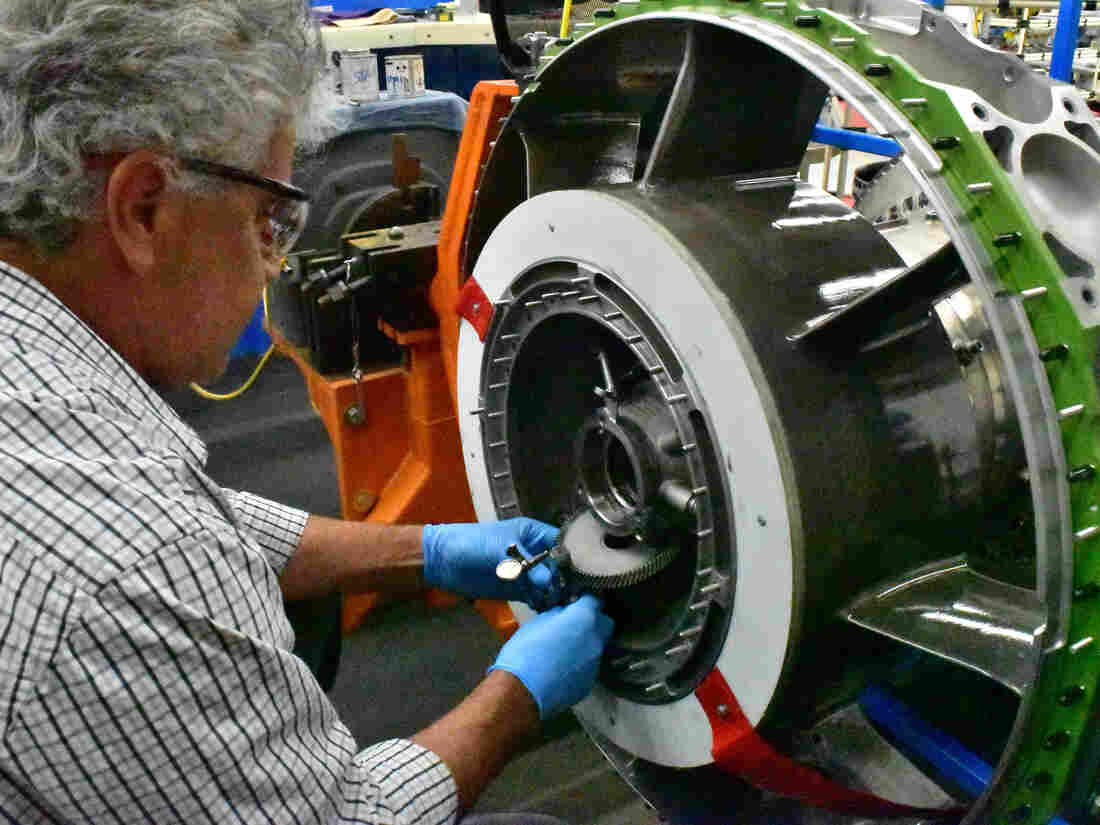 A worker builds an aircraft engine at Honeywell Aerospace in Phoenix in 2016. Aerospace is among the manufacturing sectors that could be affected by import tariffs on steel and aluminum. Alwyn Scott/Reuters hide caption 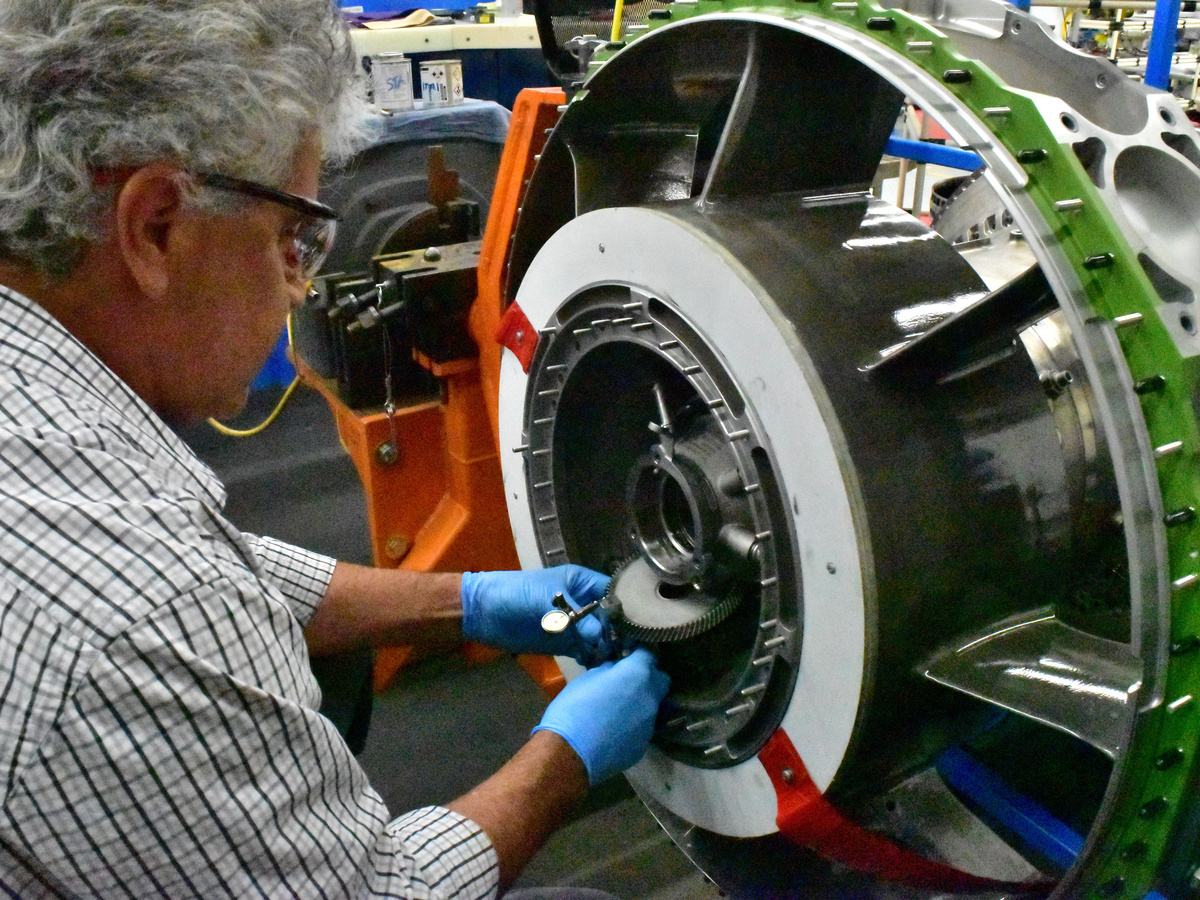 A worker builds an aircraft engine at Honeywell Aerospace in Phoenix in 2016. Aerospace is among the manufacturing sectors that could be affected by import tariffs on steel and aluminum.

As the Trump administration sees it, U.S. steel and aluminum industries are in crisis, rapidly losing ground to foreign competitors and hemorrhaging jobs along the way.

But proposed import tariffs and quotas have other manufacturers worried that they'll become less competitive in the global marketplace.

How the administration responds to the problem is something Mark Vaughn is watching very closely.

The president of a small manufacturing company in Nashville, Tenn., Vaughn makes parts for auto and appliance companies, such as Carrier, Whirlpool and Johnson Controls.

Because he buys steel domestically, he isn't concerned about the impact of import tariffs, a move recommended by Commerce Secretary Wilbur Ross last week, on his own bottom line.

But as Vaughn sees it, tariffs could disrupt the complex supply chains that he and his customers are part of.

"All of them concentrate on cost, and if the cost of their products goes up, then that would create the environment where they may go elsewhere as far as how they go about supplying their plants," he says.

Vaughn's case illustrates the larger dilemma facing President Trump as he weighs whether to impose tariffs to preserve steel and aluminum jobs, a goal that he campaigned on. Trump has until mid-April to make his decision.

This is a complex set of problems and possible solutions, with potential for unintended consequences.

"There's a real opportunity for the president to make a difference for some of those forgotten men and women that he talked about for so long on the campaign trail in states like Pennsylvania," says Scott Paul, president of the Alliance for American Manufacturing, a partnership of the United Steelworkers and manufacturers.

But tariffs could also indirectly drive up costs for other domestic manufacturers.

"This is a complex set of problems and possible solutions, with potential for unintended consequences," says Remy Nathan, vice president of international affairs at the Aerospace Industries Association.

Nathan notes that the U.S. aerospace industry, which provides 2.5 million American jobs and exports heavily, depends on steel and aluminum imports to build aircraft. He points, for example, to the metal fasteners that connect aircraft parts, which would become more expensive if tariffs go through.

"Now, multiply that impact across every possible piece of an aircraft that connects to an aluminum or a steel part, and you could have a cascading effect that has fairly significant impacts on our industry's global competitiveness," Nathan says.

For that reason, Trump will probably take a more moderate course, such as imposing penalties on dumping, says Dan Ikenson, director of the Cato Institute's Herbert A. Stiefel Center for Trade Policy Studies.

"I know the president is hearing from a lot of members of Congress and senators who have a lot of steel-using and aluminum-using businesses in their districts, and they are saying, 'Hey, if you have this blanket tariff or quotas on all sorts of imports of aluminum and steel, that's going to put a lot of our manufacturers out of business,' " Ikenson says.

He points to another problem: U.S. tariffs would almost certainly be challenged by other countries at the World Trade Organization, the body that mediates trade disputes.

The U.S. could argue that it needs healthy steel and aluminum manufacturers to build planes and tanks for defense purposes, Ikenson says. But such a move would open a Pandora's box of trade retaliation, he says.

But Paul, of the Alliance for American Manufacturing, disputes the notion that tariffs would ignite a trade war, noting that no other country is as large an import market or suffers similar trade imbalances.

"The difference is, in the past, we've just kind of sat back and taken it when countries have violated our trade laws and have dumped [imports] into our market. This time we're standing up," Paul says. "I think they're going to have a hard time saying we're not justified in taking this action."