Accessibility links
Billy Graham: 'America's Pastor' Or The Nation's Leading Hypocrite? The evangelical preacher sought to be seen as above the partisan political fray. But in his actions and associations, Graham often proved how difficult such an attitude can be to achieve or sustain. 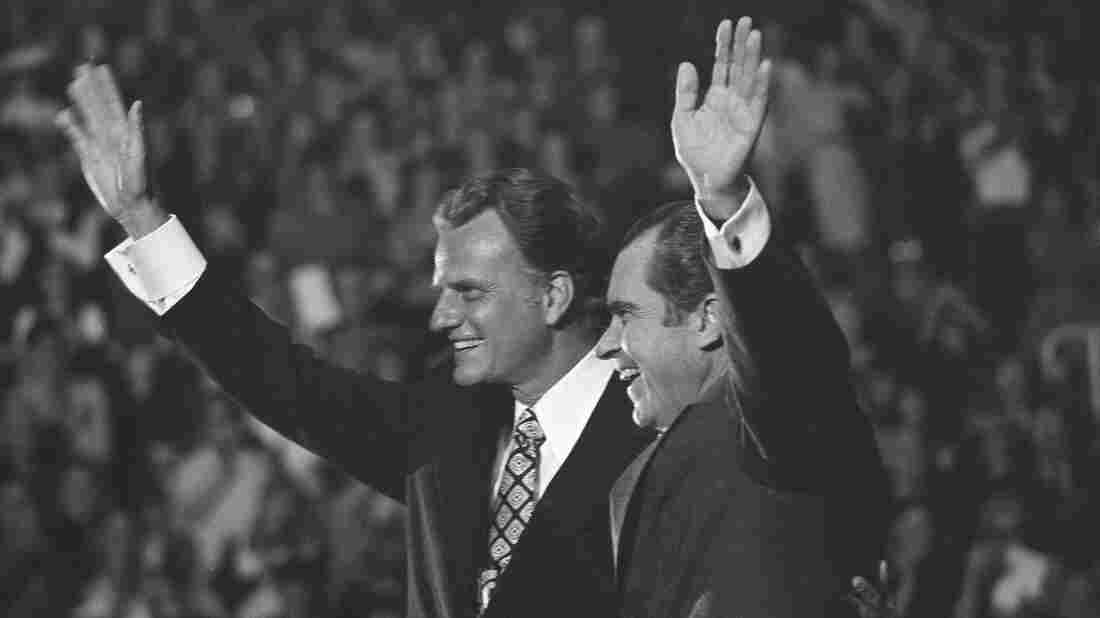 The late preacher Billy Graham, left, and President Richard Nixon wave to a crowd of 12,500 in 1971 in Charlotte, N.C., at an event honoring Graham. AP hide caption 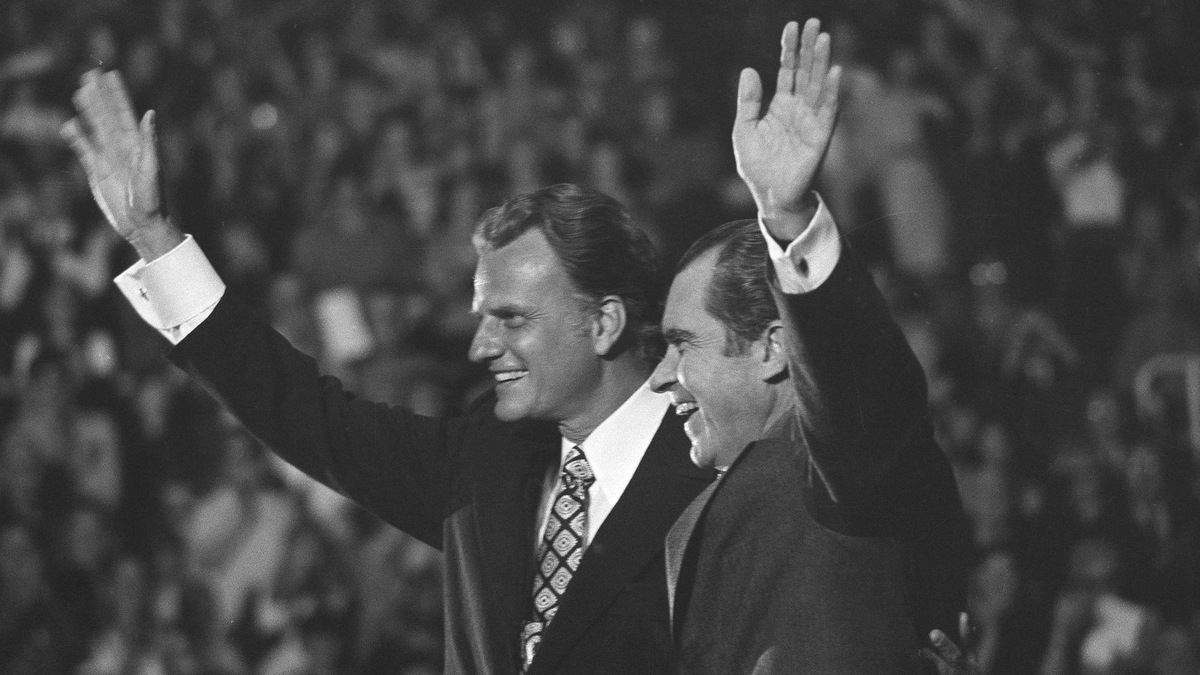 The late preacher Billy Graham, left, and President Richard Nixon wave to a crowd of 12,500 in 1971 in Charlotte, N.C., at an event honoring Graham.

American politics have always been rife with individuals who invoked the Almighty and sought divine leverage to achieve their own agendas.

Partisans on both the right and the left have revered such figures – when they agreed with their ends – and reviled them when they did not.

But it is hard to think of any clergy in any era who have ascended quite so far in the national political consciousness as Billy Graham.

It may be hard for younger Americans to appreciate the degree to which Graham mattered, or appeared to matter, in the politics of an era now past. Although he never ran for office or hosted a TV show or headed up a religious institution of any kind, Graham's presence in public came to have the effect of a papal appearance.

Indeed, some called him the "Protestant Pope."

Why There Will Likely Never Be Another Pastor Like Billy Graham

Why There Will Likely Never Be Another Pastor Like Billy Graham

The evangelist, who died Wednesday at 99, spent 60 years in prominent pulpits and in the political limelight. Billy Graham was a household name, spoken with respect by a wide swath of the citizenry. His statements were often quoted as a way of ending arguments.

And in his prime, he came to embody the conventional, yet never-quite-comfortable relationship of church and state in the U.S. 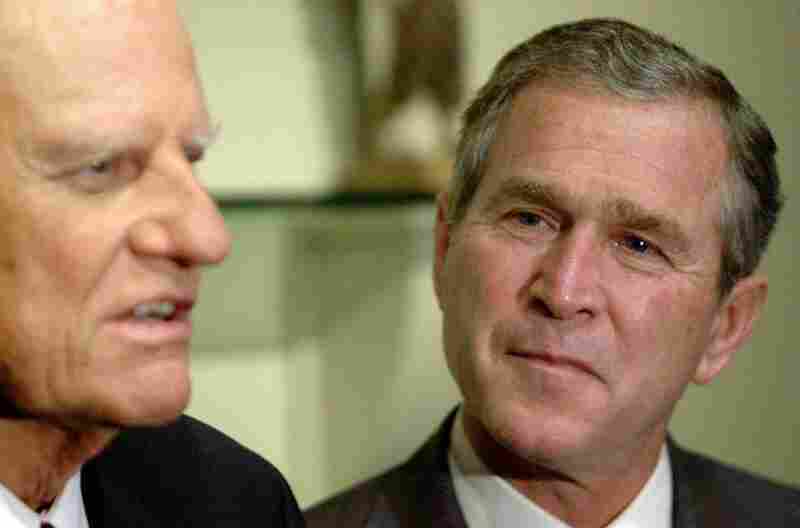 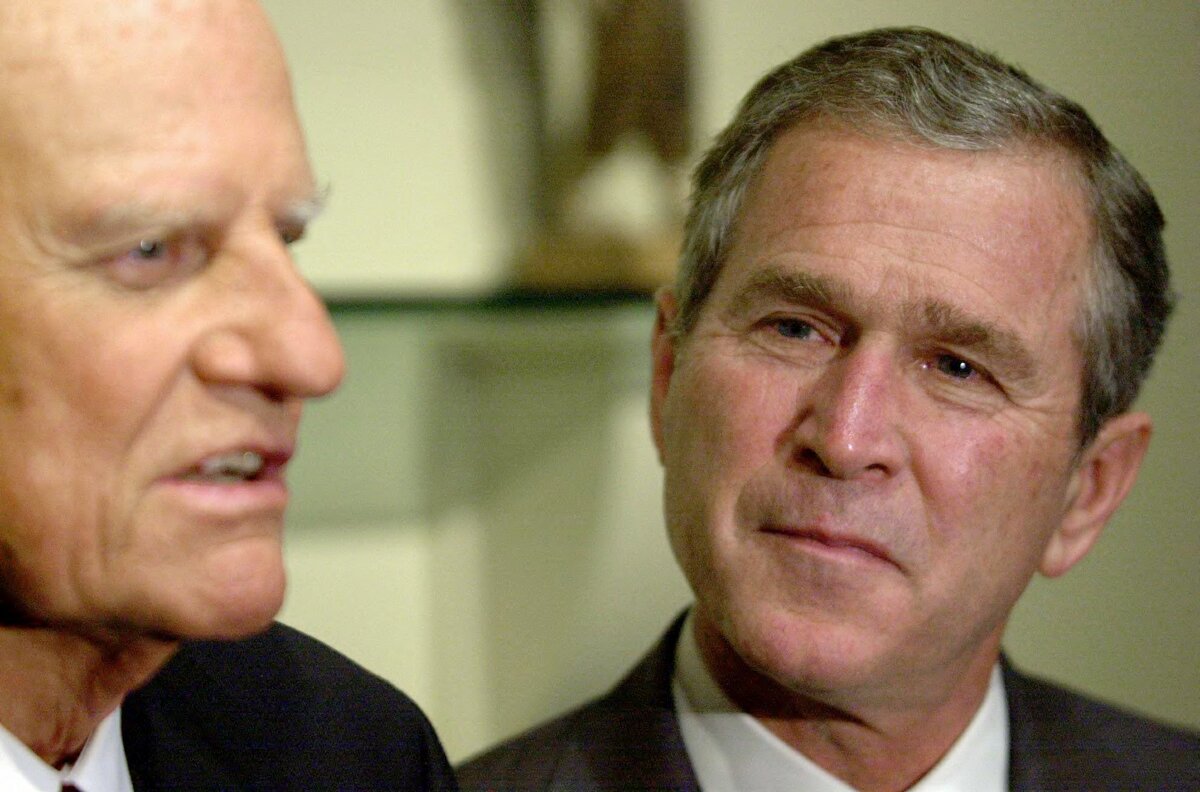 George W. Bush, then as a Republican presidential candidate listens to the Rev. Billy Graham. Bush credits Graham with his "born-again" breakthrough.

Upon his death, he was eulogized by presidents as different as Jimmy Carter, who called him "a very special man," and George W. Bush, who credited Graham with turning his personal life around with one personal conversation.

The relationships with presidents of both parties were emblematic of his effort to not only "save souls" but also project religion as non-partisan and non-denominational Americanism.

He sought to be seen as above the partisan political fray. But in his actions and associations, he often proved how difficult such an attitude can be to achieve or sustain.

To some, he was "America's Pastor," a benign pater familias blessing the nation.

To others, he was the country's leading hypocrite, in one moment preaching a gospel of love and, in another, advising presidents to escalate the war in Vietnam.

He was never a radical in the usual sense of the term. In the struggle for civil rights, he had episodes of courage, such as integrating his revival meetings in 1953 or bailing fellow cleric Martin Luther King out of jail in Albany, Ga., in 1957.

But in the movement's crunch time, in the 1960s, Graham was missing in action. He skipped King's march in Selma, and many others, for which he expressed regret in a 2005 interview with the Associated Press.

He also repented of his forays into presidential politics, telling Christianity Today in 2011 that he "would have steered clear of politics." He said he was grateful to have ministered to the needs of "people in high places ... but looking back, I know I sometimes crossed the line, and I wouldn't do that now." 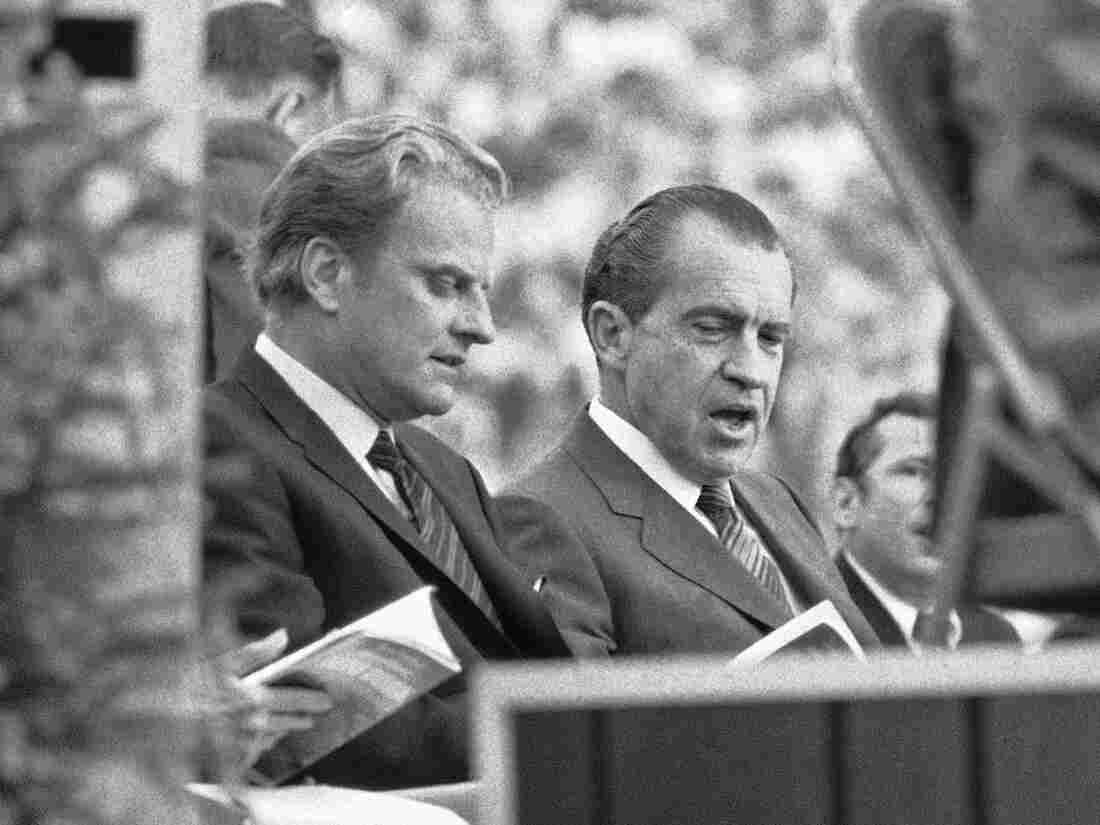 President Richard Nixon chats with the late Billy Graham, as they look over the Crusade program in Knoxville, Tenn. in 1970, a Graham-organized event that drew 75,000 people. Lou Krasky/AP hide caption 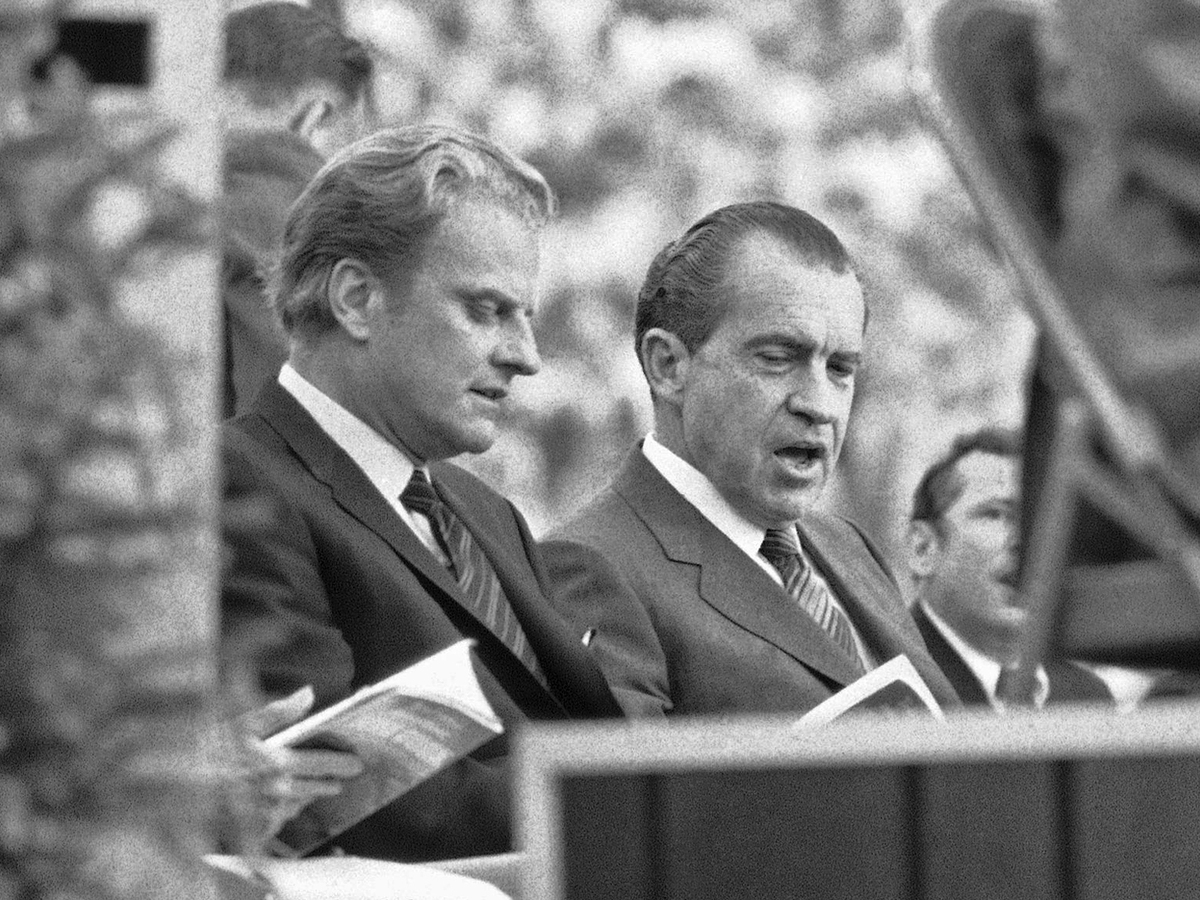 President Richard Nixon chats with the late Billy Graham, as they look over the Crusade program in Knoxville, Tenn. in 1970, a Graham-organized event that drew 75,000 people.

Like most Southerners, Graham grew up assuming he was a Democrat and was registered in that party as late as 1960. But that year, the Republicans nominated Richard Nixon for president, a man with whom Graham had struck up a friendship as far back as the 1940s.

They met when Nixon was making his name as a young California congressman doggedly pursuing communists in the U.S. government. Graham at the time was bringing his fledgling "Crusades for Christ" from the upper Midwest, where they began, to Southern California.

It was there that Graham was discovered by the media heavyweight William R. Hearst, who gave the tent revival meetings an enormous boost in his newspapers and on his radio stations. The Time-Life founder Henry Luce followed suit in his magazines. Graham, still in his early 30s, became a national sensation.

Nixon meanwhile won a Senate seat in 1950 and was on the GOP's national ticket two years later. As vice president, he would agree to speak at one of Graham's outdoor crusades, which had grown large enough to fill ballparks.

The two men shared a passionate opposition to communism that would help power their rise to prominence. It also served as a bond between them. Graham was talking strategy with Nixon as early as the 1960 campaign, and he dropped all pretense when Nixon returned as the GOP's nominee in 1968. That year, he endorsed Nixon and permitted the use of his endorsement in TV ads.

Thereafter, he was in close touch with Nixon on a variety of subjects, including tactics against the North Vietnamese. If they wouldn't come to the negotiating table, Graham urged, the U.S. should bomb the dikes and flood vast sections of the country to collapse their economy.

He also took part in conversations in the Oval Office that veered into topics such as the domination of certain major newspapers and TV networks by Jewish owners and editors. Unbeknownst to Graham, these conversations were recorded. When the tapes were released in 2002, he said he could not recall saying these things but also apologized.

Carter's presidency gave Graham the opportunity to support a Democrat and a fellow "born again" Baptist in the White House. But Graham was at least as comfortable with the man who beat Carter in 1980, Ronald Reagan, who shared much of Nixon's political background in anti-communism and Southern California conservatism.

Reagan and Graham were said to have discussed theology in their White House meetings, all of which were, like all of Graham's visits there, faithfully captured on film.

These visits continued with both Presidents Bush, father and son, as well as with Bill Clinton. President Barack Obama traveled to North Carolina to visit Graham in 2010, at which time the evangelist was in his 90s and suffering from multiple ailments.

Graham has been credited with renewing the political activism of evangelicals, and particularly that of fundamentalists, who had recoiled from the soiling world of politics through much of the 20th Century. Southern Baptists in particular were often caught between two traditions, and Graham provided a kind of bridge for many to make the transition from the part of Jefferson and Jackson to the party of Abraham Lincoln.

In that sense, Graham's forays into politics contributed to the unifying of social conservatives under the Republican banner – a potent feature of U.S. politics in our time. But that was not an achievement Graham touted for himself.

Rather, in the same sense that he held himself apart from the televangelists who followed him – Pat Robertson, James and Tammy Bakker, Jimmy Swaggart – Graham kept his distance from much of the evangelical community's political activism in recent decades.

He did not join with the Moral Majority or other groups in the "religious right" or do much for their movement. Graham's son and successor, Franklin, has been a study in contrast, embracing conservative hardliners unabashedly (and endorsing President Trump).

Some of the elder Graham's later reticence may have reflected his failing health, or his heterodox views that opposed abortion and same-sex marriage but also embraced the idea of global nuclear disarmament.

Or it may have reflected that sense of repentance to which he sometimes confessed, wishing he "would have steered clear of politics" when it mattered most.