Accessibility links
Patton Oswalt On His Late Wife's Search For The Golden State Killer Before Michelle McNamara died in 2016, she was working on a book that aimed to bring a serial rapist and murderer to justice. I'll Be Gone in the Dark has now been published. 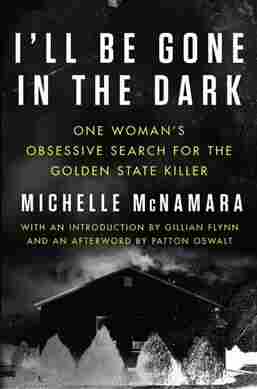 I'll Be Gone in the Dark

One Woman's Obsessive Search for the Golden State Killer

Writer Michelle McNamara was fascinated by true crime. She created the website True Crime Diary and became mesmerized by a series of crimes from the 1970s and '80s: 50 sexual assaults and at least 10 brutal murders committed in Northern California by a violent psychopath who she called "The Golden State Killer."

McNamara was at work on a book she hoped might deliver the killer to justice — or at least comfort the victims' families — when she died suddenly in her sleep in 2016. She was 46.

Colleagues who knew her and her work helped finish the book, which has now been published. It's called I'll Be Gone In The Dark: One Woman's Obsessive Search For The Golden State Killer, and it has an afterword by comedian Patton Oswalt, who was married to McNamara.

Oswalt says his late wife "had that combination of — how could I put it best — empathy but then mathematical coldness to look at dates and times and cities and link them up, even though they were all linked by the kind of events and the kind of horror that I think would make a lot of people just look away and not want to delve any deeper."

On what drew McNamara to the Golden State Killer story

I mean, she definitely loved the puzzle aspect of it, the fact that there's a limited amount of pieces and you have to try to ... bring a solution. And you know, that's a very addictive thing. I think that's another part of a cop's personality, is that it's a compulsion to want to find the facts and solve these mysteries. Yeah, and she very much admitted it, that, oh, there was a bit of a thrill to this. There certainly wasn't a thrill in reading about people being killed, but there was a thrill in, "Oh, I could maybe catch this guy." And figure out, you know, not only capture him, but then find out who he is and find out his reasons and what made him that way.

Patton Oswalt: Falling In Love Again Was Like 'Getting Hit By Lightning Twice'

On the blind alleys McNamara encountered in her investigation

Any homicide cop will tell you: You go down what looks like a promising lead and it leads to a brick wall. And so you have two things that happen there – you have the frustration of, "Oh, this led nowhere," and then you also have the frustration of, "The two weeks I spent pursuing this was two more weeks lead time that I've given this creep." And that really takes a toll after a while. And it makes you sometimes gun-shy.

And what's even worse is sometimes you'll have too many leads to go down, and it's almost like you're on this hellish game show where you're like, "Which door do you choose to go down right now?" knowing that if you pick the wrong one and spend months on it, there's two months more head start you've just given this guy.

By trying to live in the sunshine and love my daughter and love my new wife, and be kind to my friends, and be kind to people, knowing that this is a guy that has never had any of that in his life. And, you know, unless we capture him, the one thing that you can do to people that are sitting outside of the edge of the fire is to really kind of revel in being in the light and being in the heat, because they don't understand that. Not to even mock them with it, but if I sit there and brood, and I'm dark, and I become distant to my wife and daughter and to my friends and just to the world in general, and I become this gray cloud, then I've helped extend his hold over life, basically, if you do that. So that you almost have an obligation to go and try to bring more life to life, and balance out the life he's trying to drain from it, I guess.

On how he's managing after McNamara's death

I mean, right now I'm doing way better than I thought I would, you know? I've remarried to this amazing woman who loves Alice [his daughter], and Alice is growing up strong in the aftermath of what she went through. Kids are insanely resilient, and you see them bounce back. And so I'm living right now — I would say that I'm living right now with a lot of hope.

Peter Breslow and Barrie Hardymon produced and edited this interview for broadcast. Sydnee Monday and Nicole Cohen adapted it for the Web.