Accessibility links
Boom In Antler Pet Chews May Have Opened A Black Market Hunters are waking up to find their prized antlers have been stolen overnight in Alaska, where online ads offering cash for antlers have proliferated. 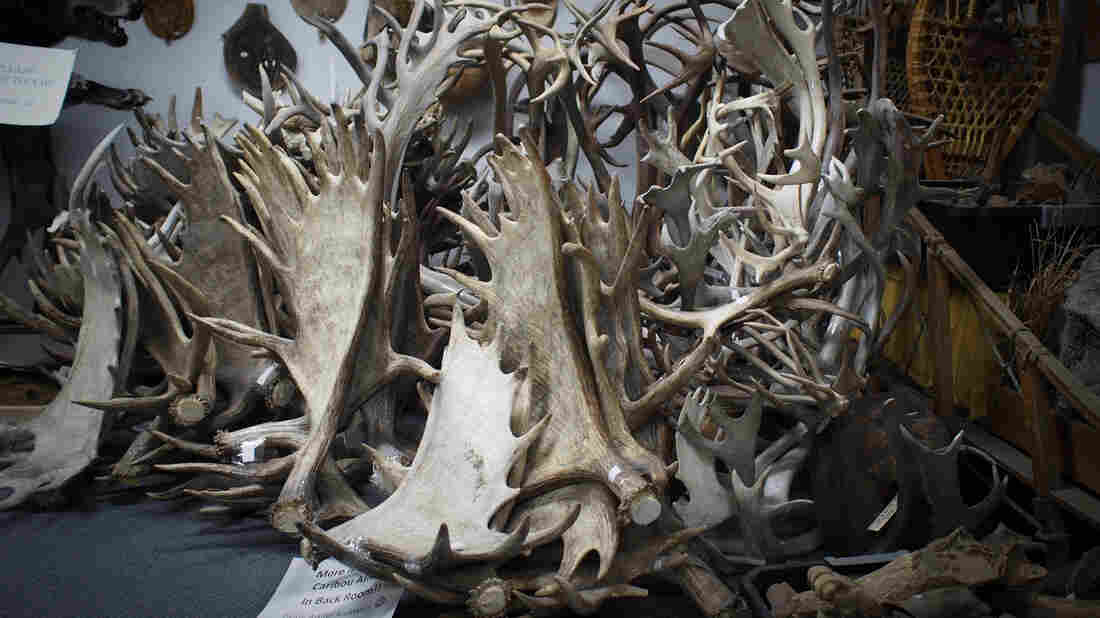 Moose and caribou antlers sit in a corner of the Alaska Fur Exchange in Anchorage. These large, high-quality antlers are unlikely to be cut down into pet chews and are mostly purchased by collectors. Zachariah Hughes/Alaska Public Media hide caption 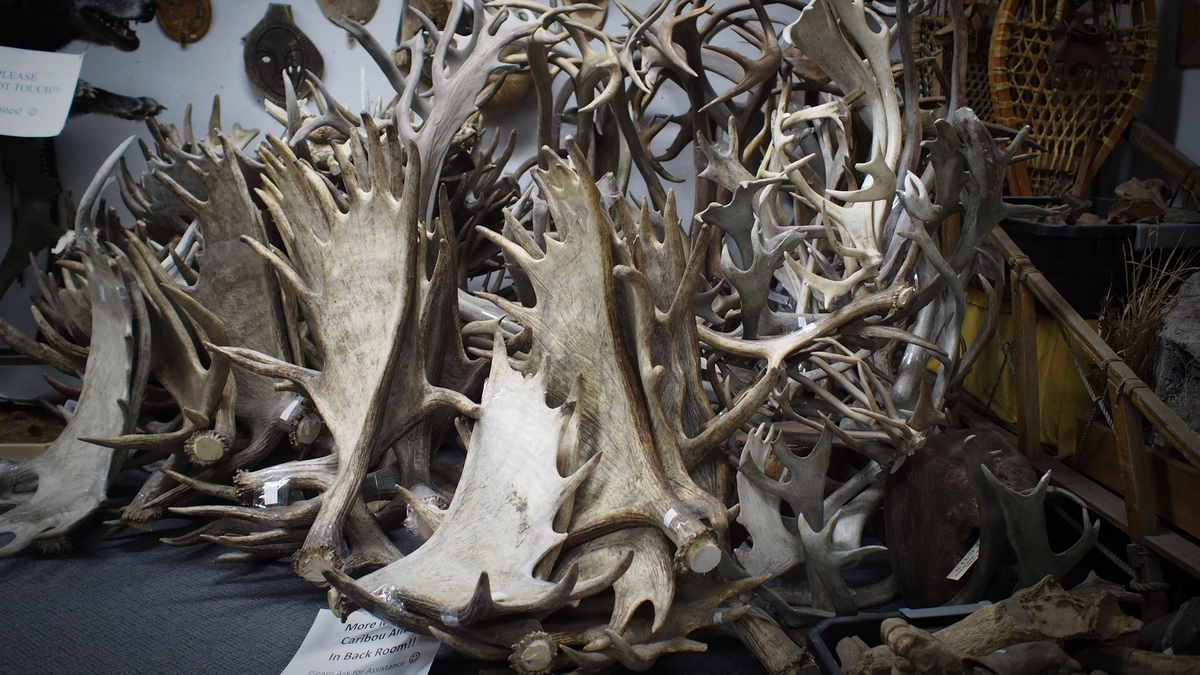 Moose and caribou antlers sit in a corner of the Alaska Fur Exchange in Anchorage. These large, high-quality antlers are unlikely to be cut down into pet chews and are mostly purchased by collectors.

Three weeks after he mounted them on the front of his garage, Jeff Young found his prized antlers were literally ripped off.

"I think they just hung on them," Young says of the thieves, pointing up at the empty drill holes on the garage's façade one gray morning in Anchorage this winter.

"They were up on this six-foot ladder, as far as they could get, and then just pulled them down," Young says.

He found the ladder, taken from a nearby construction site, near his garage the next morning.

"It sucks getting stuff stolen," Young says. "Doesn't matter what it is."

In this case, it was two large racks of moose antlers. Young and other hunters see antler theft as growing problem — one connected to the pet industry.

After the theft in July of 2016 Young tried tracking the antlers down. They held sentimental value; the larger set of antlers came from the first moose he had successfully hunted. The set had a distinctive feature he was sure would help it be identified: A bullet hole right through the center where he'd landed his shot.

Young filed a police report, scoured social media, and called a few merchants offering to buy, but to no avail. It wasn't until later that he found other hunters griping to one another and on neighborhood groups like Nextdoor about the same thing happening to them.

"I started hearing more stories from other friends that are hunters: 'Yeah, I had a pile by the shed, been there 10 years, all gone,' " Young says. "Another guy was like, 'Yeah, I always threw them on the roof, come home one day, all gone.' "

The demand driving this theft, hunters believe, is the pet store trend of selling strips of antler as dog chews. 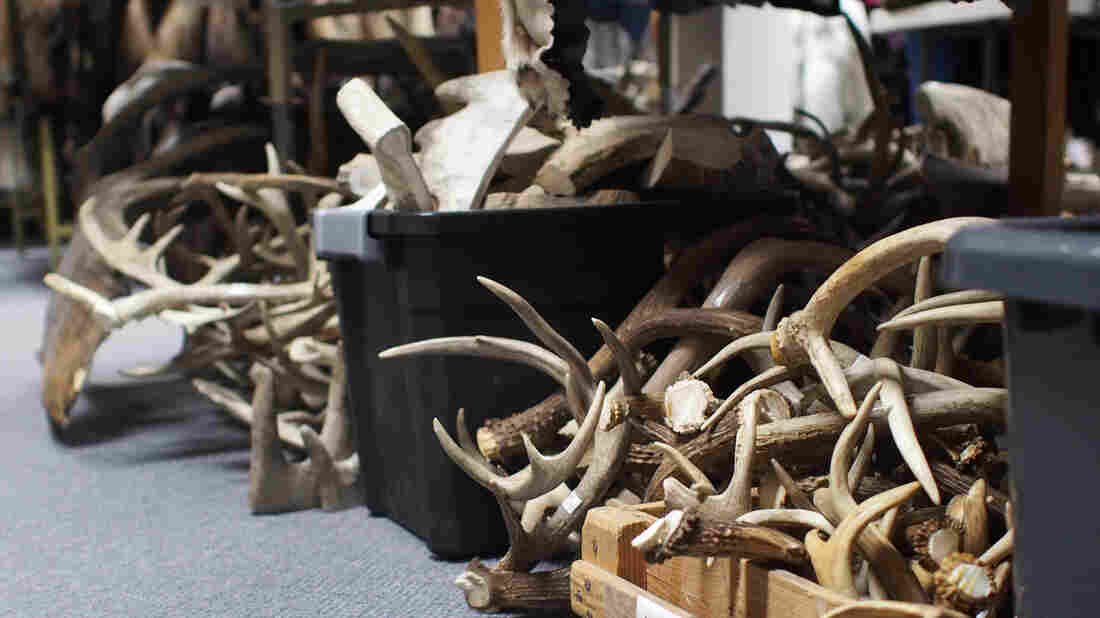 Boxes of deer, caribou, and moose antlers are sold at the Alaska Fur Exchange in Anchorage, some as pet chews, others as souvenirs or material for crafts. Zachariah Hughes/Alaska Public Media hide caption 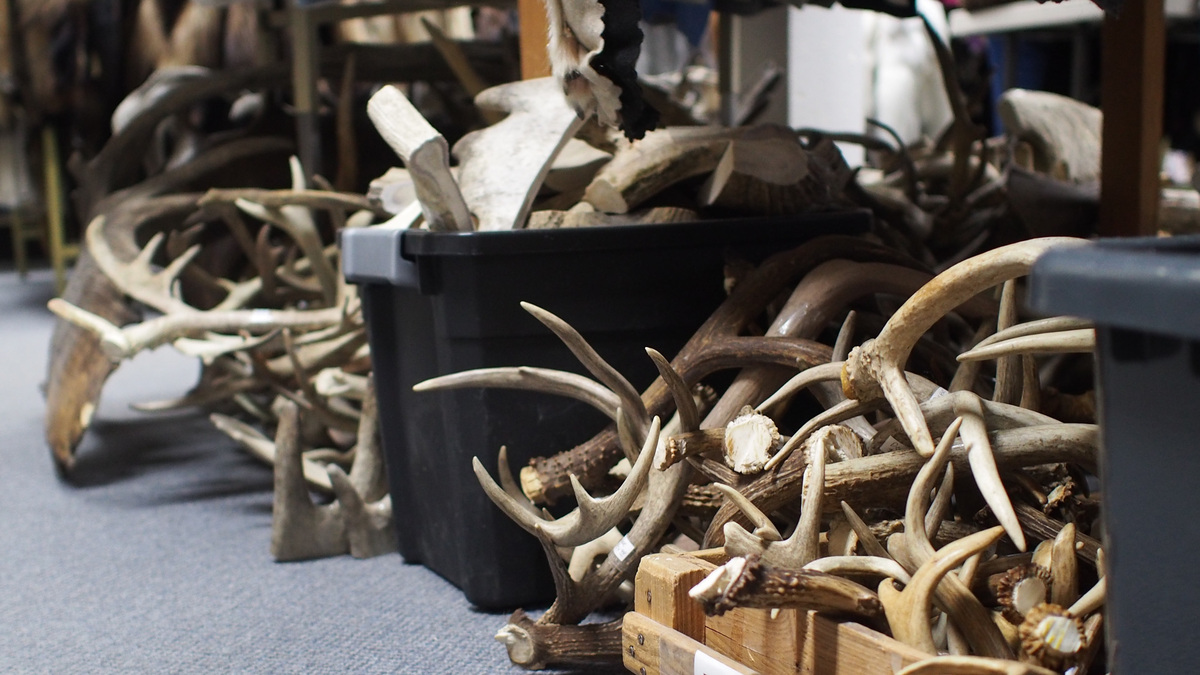 Boxes of deer, caribou, and moose antlers are sold at the Alaska Fur Exchange in Anchorage, some as pet chews, others as souvenirs or material for crafts.

At a Capitol Hill pet store in Washington, D.C. called Howl to the Chief, clerk Vincent Ford extols the benefits of antler: It's got healthy minerals, lasts a long time, and he says they can be good for canine oral health.

"It takes off the plaque and the tartar by them chewing on it, so this is a good treat for that, too," Ford says—although some veterinary guidelines discourage antler chews because they can break teeth.

Antler is just one of the popular organic chew products sold to pet owners. It's a growing share of the booming pet supply industry, which last year saw more than $69 billion in sales, according to the American Pet Products Association.

Ford carries pricier organic chews, like lamb and cow tails. The store stocks horns from goat and bison, too. Hand-length shards of deer and elk antler are on the more affordable side. But the expense and popularity has regular customers getting entrepreneurial in the hunt for antlers out in the wild.

"A lot of people actually have [started] to get their own antlers now," Ford says. "This lady tells me she goes to Alaska and just takes a trash bag and does it."

Online, pet supply companies will sell a six-inch chunk of elk antler for $15, marked as organic and "naturally shed," a designation that implies they were collected after being dropped by the animal during a seasonal molt. An Alaska-based business offers single caribou antler chews for large-breed dogs at $23. Amazon Prime members can get a thick slice of moose antler for $30.

Any link between pet chews and stolen antlers is hard to prove, largely because there is little data or monitoring over the source material and complicated supply chain.

The Anchorage Police Department has a record of 14 antler thefts in 2017 but Deputy Communications Director Nora Morse suspects that number is under-reported. Police in Alaska also cannot definitively say whether antler theft is on the rise. A burglarized home-owner might not specify for a police report that moose or caribou antlers were among the possessions stolen from a home.

But hunters and horn merchants believe the thefts are being carried out by low-level criminals trying to make a fast buck by unloading antlers that are eventually sold to larger pet supply companies. Unscrupulous buyers can easily cut the antlers and horns into small chunks with a table or band saw, making the source material all but impossible to trace. The issue is framed as a subset of Anchorage's worsening property crime, which municipal and law enforcement officials attribute in part on the state's opioid epidemic.

The market for antler chews, particularly on the supply side, is very loosely regulated. While animal products meant for consumption have to meet certain safety criteria of the Food and Drug Administration, the pet supply industry falls under a murky mix of federal, state, and industry standards. Nationally, the Association of American Feed Control Officials, a volunteer group with no regulatory authority, develops model guidelines for pet foods. That organization's website names their state counterpart in Alaska as the Division of Agriculture, but Lora Haralson with the division wrote in an email that they do not regulate or have requirements for these kinds of pet products.

Multiple pet supply companies contacted for this story either declined to comment or offered general remarks that sourcing quality standards are ensured.

So it can be up to individual buyers to determine if a moose antler was legally obtained.

"If a guy comes in and he looks like a hunter and he talks like a hunter then you get a pretty good feel for it," says Gus Gillespie from behind the counter at the Alaska Fur Exchange.

Gillespie got into the horn and hide trade several decades ago after years with the Navy and as an engineer in the oil fields on Alaska's North Slope. Now he and his wife run the Fur Exchange, where on any given day, just past the rows of wolf and opossum pelts, are piles of antlers jumbled up like waist-high tumbleweeds. On the ground are plastic bins filled with spiky tines and plates sawed down into palm-sized strips. It is an astounding volume of animal matter.

"As far as antler, it's either crap and we don't want it, or it's really, really nice," Gillespie says with a laugh.

The four or five years since antler chews have become more popular with his customers have been good for Gillespie's business. Instead of trading predominantly in the large, high-end antlers favored by artisans and collectors, the store can now buy more medium-sized products to cut down into the chews they stock in baskets by the register.

But he has turned sellers away if he thinks the source material might have been illegally obtained. Gillespie points to the pervasive presence of substance abuse, and says he and his staff look for whether a person seems drunk, high, or in withdrawal as they assess a potential purchase.

"If it's questionable, we don't do anything with it for a while," he says. They might tell someone to come back in a few hours, pulling images of the person or their license plate from the numerous security cameras mounted around the store, sharing the information with police.

"We have been instrumental in a lot of people getting caught," Gillespie says.

But anyone he turns away can just go to Craigslist—where every day in Alaska, plenty of people promise in all caps to pay up to $50 a pound in cash for antlers. And once they're cut down into the small chunks sold over the counter, nobody can really say whether they were stolen or not.

This story has been updated to reflect that some veterinary guidelines discourage the use of antler chews.