Accessibility links
What's In The House Democrats' Memo About Russia And The Trump Campaign? House Intelligence Committee Democrats have released a redacted version of their Russia countermemo. Here are 5 takeaways about Congress' saga of the dueling memoranda. 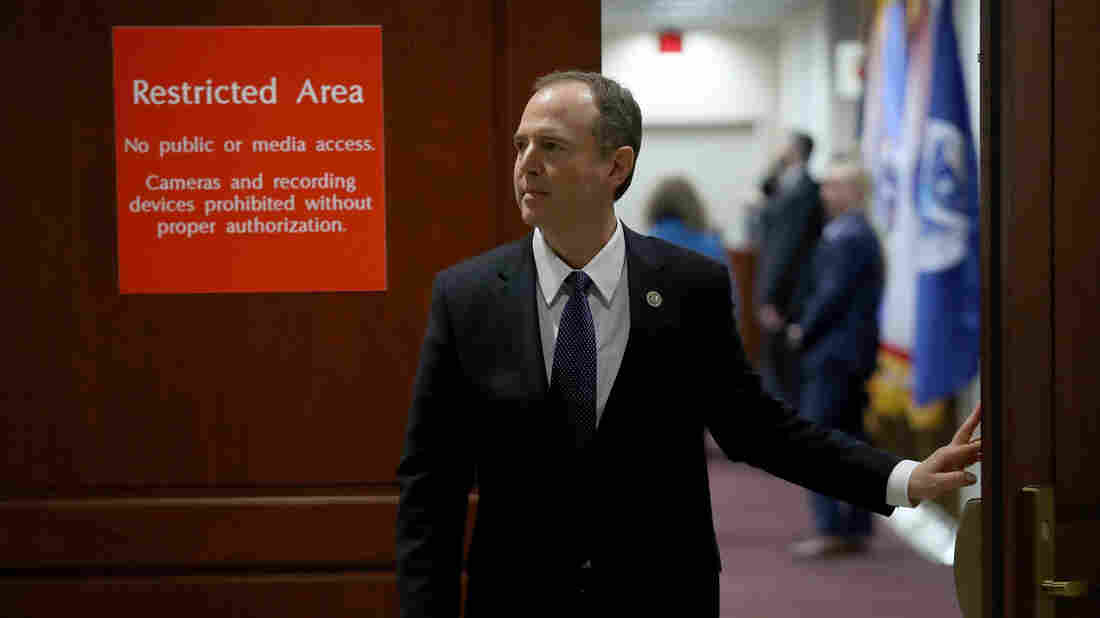 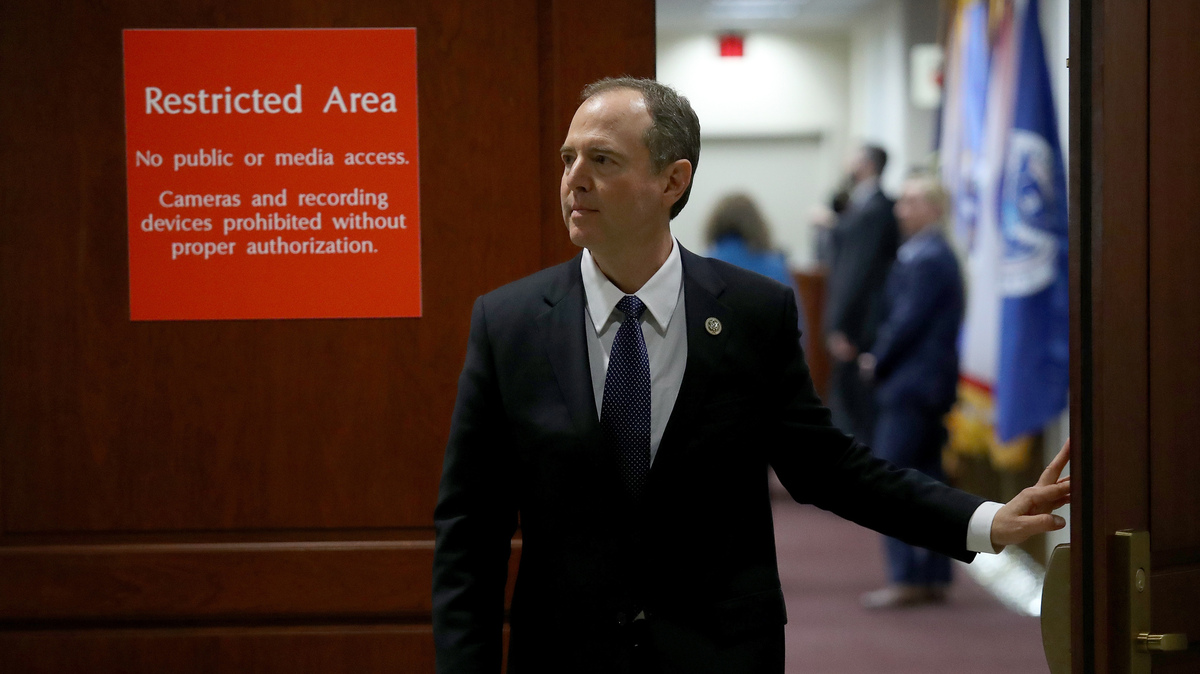 Rep. Adam Schiff, D-Calif., the top Democrat on the House intelligence committee, leaves a committee meeting at the U.S. Capitol Feb. 5, 2018 in Washington, DC. On Feb. 25, Schiff released a memo responding to a previous Republican memo about the investigation of President Trump's 2016 campaign.

After nearly a month of pronouncements, melodrama, headlines and strife, Round One of memo mania is finally complete.

Then, on Saturday, committee Democrats released a rebuttal giving their perspective on the story — or at least part of it.

One privilege enjoyed by intelligence committee chairman Devin Nunes, R-Calif., is that his majority on the panel, and the presence of allies in the executive branch, meant he could arrange for his memo to be released swiftly and in full.

The minority response by ranking member Adam Schiff took weeks and was partly redacted, with large sections blacked out to conceal secret information.

Even though the countermemo is incomplete, it includes several points of interest that advance the never-ending story of the Russia imbroglio.

1.The FBI has corroborated parts of the Russia dossier

The potential case that Donald Trump's campaign may have conspired with the Russian attack on the 2016 election has always been about more than the infamous dossier. Trump and his supporters deny colluding and make the dossier a favorite target because of its salacious contents and because it remained unverified.

NPR and other news organizations have not detailed the contents of the dossier because it remains unproven, but Schiff's memo suggests that the Justice Department actually has corroborated parts of it.

Which parts? That is blacked out. So there is no way to know whether it's some of the anodyne background aspects of the file — or the more infamous passages.

All the same, it is significant that the Justice Department has established for its own purposes that at least some of the contents of the dossier aren't either simply false or Russian disinformation.

Onetime Trump adviser Carter Page is the main character of the dueling memos. For Republicans, he is a civil liberties martyr who was cruelly wronged by "biased" FBI and DoJ officials who duped a judge into authorizing intrusive surveillance against him.

Schiff's memo makes a very different case. It not only cites Page's years-long flirtations with Russia's foreign intelligence service, the SVR, but highlights what it calls the worthwhile information yielded by spying on him. The Foreign Intelligence Surveillance Act requires that warrants produce something. The FBI can't keep one going if the subject of the surveillance isn't talking with people of interest or involved with clandestine activities. Page evidently was.

That's why it was significant that Justice Department officials from the administration of President Obama and into that of President Trump, including Deputy Attorney General Rod Rosenstein, signed the applications to reauthorize the surveillance on Page. Although it was possible to surmise before that the spying was producing evidence, Schiff's memo confirms that explicitly.

"The Court-approved surveillance of Page allowed FBI to collect valuable intelligence," it says.

What did the feds learn? Those sections are blacked out. Phrases that do appear in this section, however, include "repeatedly contacted" and "contradict his sworn testimony" to the intelligence committee.

3. The FBI investigated other people in Trump world

Page's case has become well known. So has the story of another junior foreign policy adviser to the Trump campaign, George Papadopoulos, who was importuned by Russian agents offering help to Trump. But the FBI has been investigating more people in the Trump camp, according to the Democrats' countermemo.

Schiff's memo describes how material from the dossier didn't begin to reach the FBI unit running its counterintelligence investigation into Trump and Russia until seven weeks after it had begun its work. Then the memo says this:

"By then, the FBI had already opened sub-inquiries into [redacted] individuals linked to the Trump campaign: [redacted]" and Page.

This is important for a few reasons. One, the wording of this passages suggests at least three or four subjects. Two, it doesn't seem to suggest that Trump himself was the subject of a "sub-inquiry," verifying a defense he has offered several times. Three, it suggests these other people might have been the subject of government surveillance in addition to Page — and that raises the question about whether the FBI might still be monitoring people in Trump's orbit today, including within his family or the White House.

4. Republicans have not budged from their earlier attack

Schiff and Democrats use much of their memo to defend the FBI and Justice Department. The agencies made appropriate disclosures to the Foreign Intelligence Surveillance Court in asking to surveil Page, the Democrats argue, and Republicans' other attacks are "irrelevant."

Nunes continues to argue they are, in fact, pretty relevant. His statement on Saturday continued to focus on what he called the abuse of power in Page's case, including what he said were the FBI's failures to give all the relevant information it had about the Democratic-underwritten dossier and Page's own record.

"The American people now clearly understand that the FBI used political dirt paid for by the Democratic Party to spy on an American citizen from the Republican Party," Nunes said.

The White House, meanwhile, complained that Democrats omitted in their memo that former Deputy FBI Director Andrew McCabe had said that the dossier was the basis for the FISA application on Page. Schiff's memo does make its own case in that point and argues the FBI would have continued its investigation of the Russian attack and Page without the dossier.

This back-and-forth is important because although the Russia imbroglio is moving on — with new indictments brought by Justice Department special counsel Robert Mueller, new guilty pleas and other such developments — the political attack lines, so far, have not.

5. The template has been established for memo madness

The more a game is played, the more adept teams become at its rules and strategies. Basketball defenders deliberately foul an opponent to force a free-throw. A manager brings up a left-handed reliever to pitch inside to a dangerous left-handed hitter.

The Republican memo gambit and last weekend's Democratic riposte complete the first enactment of what could become a recurring sideshow inside Washington. The majority uses its control of the committee and its alliances inside the executive branch to release an unexpurgated file even if some of the relevant agencies object — as the FBI and Justice objected to the release of the Nunes memo.

The minority can't twist the arms of the agencies controlled by its opponents and it can't get parity with the opening shot: Nunes' memo was released by lunchtime on a Friday following a week of extensive coverage. Schiff's memo came out with no preliminary fanfare on a Saturday afternoon.

So will this be the template for each game? Or will Nunes and Schiff take a different approach next time? And with the rules more or less set, how will other players respond? Round Two is already different: Nunes suggested he was preparing another memo about what he calls problems with President Obama's State Department. So a former State official wrote a column in the Washington Post that tried to short-circuit that attack.

With Round One of memo v. countermemo now complete, the stage is now set for new permutations of the game that may last as long as the Russia saga itself.