Accessibility links
Pension Funds Under Pressure To Sell Off Investments In Gun-Makers Since the mass killing at a Parkland, Fla., school this month, many teachers have called on funds to sell their stakes in gun-makers. But some fund managers say that may not lead to industry change. 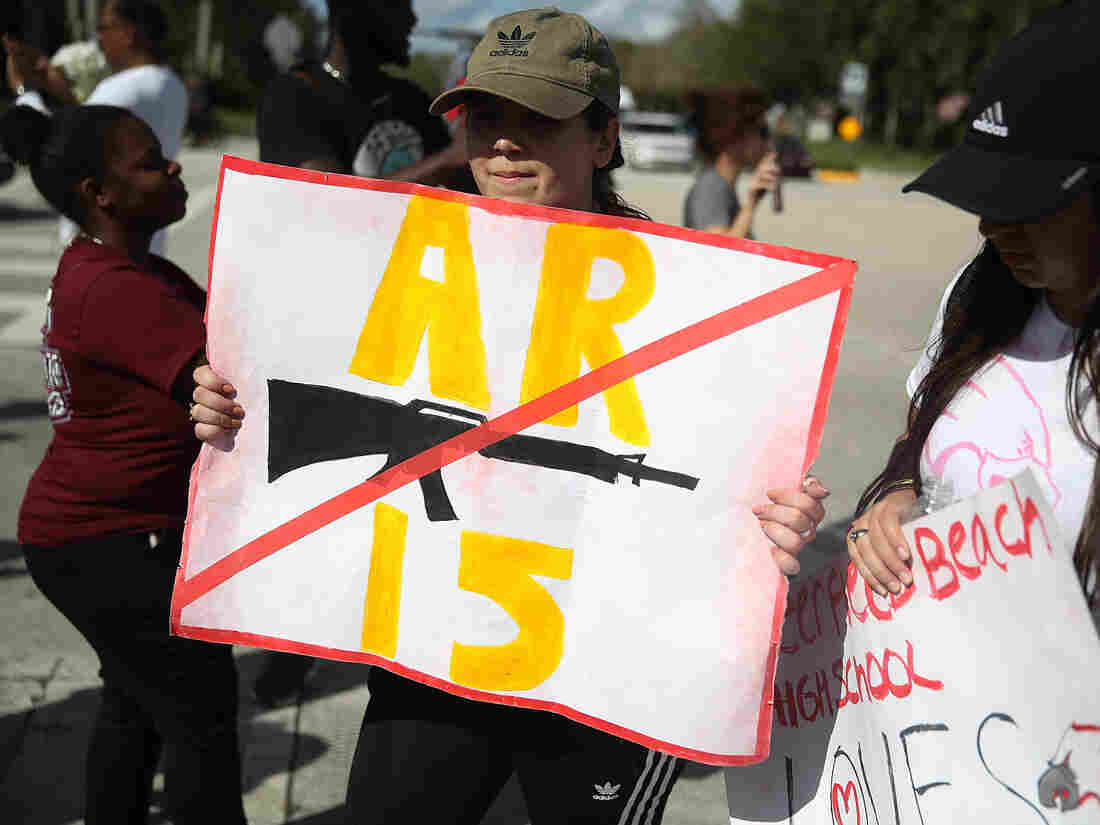 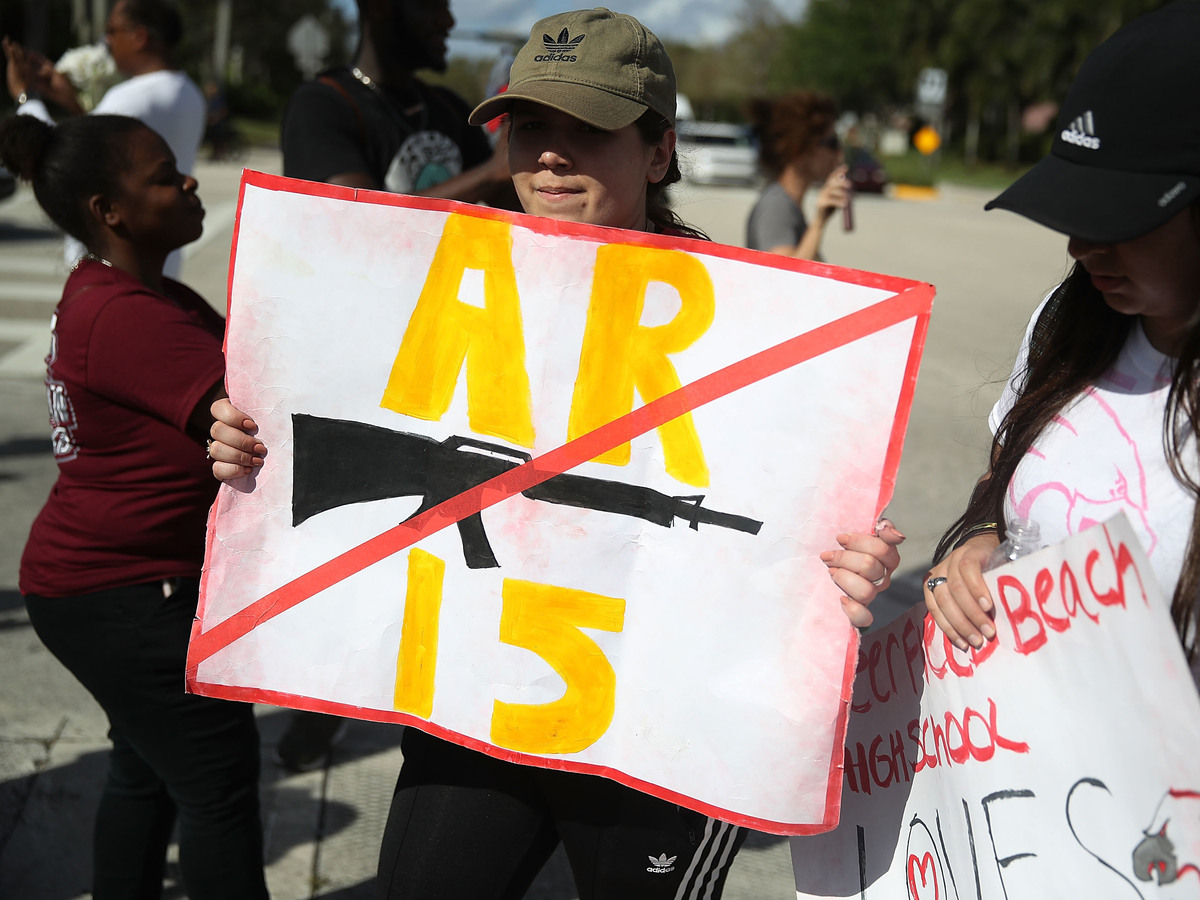 Deerfield Beach high school students arrive at Marjory Stoneman Douglas High School on Friday after walking 11 miles from school to school in support of the victims of the mass shooting in Parkland, Fla.

Since the mass killing at a Parkland, Fla., high school earlier this month, many teachers have called on their state pension funds to sell their stakes in gun-makers. Private investment firms including BlackRock and Blackstone are reviewing their firearms investments in response to clients' demands.

But even those sympathetic to their position say divesting from those companies doesn't lead to industry change.

Many state pension funds that invest on behalf of public employees and teachers own shares in firearms manufacturers passively — they own their stakes primarily because they are included in broad market index funds that pensions invest in.

"I'm currently urging my colleagues to divest in retail and wholesale suppliers of weapons that are banned for possession or sale in the state of California," says State Treasurer John Chiang, who sits on the boards of his state's two largest pension funds — CalPERS for public employees and CalSTRS for teachers.

He is urging pensions across the country to sell off their investments in gun-makers and gun retailers.

"We can make a clear and powerful signal that the inaction by Congress is heartless, it's intolerable, and there are people who want to make sure that kids aren't losing their lives," Chiang says.

"After the Sandy Hook disaster, our board took a look at particularly firearms, and decided there are certain companies that made firearms that were already illegal in the state of California, and felt that that regulation may expand and hurt those companies. And so we divested of them," says Christopher Ailman, CalSTRS's chief investment officer.

But that was a purely financial decision, he says, not a moral one.

As managers of people's money, Ailman says pensions are bound by fiduciary obligations — that is, the goal of a pension is to preserve and grow assets.

Over the decades, CalSTRS has divested from other industries — including tobacco and coal. Ailman says the fund decided to divest because it anticipated stricter regulation, which would hurt those companies' sales. And in each of those cases, he says the fund's sell-off had zero impact on the companies' products or strategy.

"We had to write them a letter and tell them we no longer own their stock and wouldn't in the future, and I can tell you, they don't care," Ailman says.

Despite its public popularity, divesting is not a proxy for policy change, he says.

"I care about many of these issues personally, very deeply, and want to bring about social change, and I just am frustrated that activists are wasting their time focusing in on this as a mechanism when it's not effective," he says.

When it comes to economic pressure, social advocates say it's much more important for consumers to target the company's bottom line than for investors to divest.

Over the past week, the #BoycottNRA campaign has gained steam, leading airlines, hotels, banks and insurance companies to sever their discount programs with members of the National Rifle Association.

Avery Gardiner, co-president of the Brady Campaign to Prevent Gun Violence, says she wants to see the campaign expanded to include a broad consumer boycott of retailers that have lax policies on gun sales.

"If Big 5 or Camping World or Dick's Sporting Goods won't adopt sensible practices related to selling guns, then people shouldn't buy their soccer cleats and footballs and other equipment at those stores, either," she says.

Denying those companies business affects their profitability, which in turn may affect store policies, whereas investors who sell off their shares simply lose their rights as shareholders, Gardiner says.

"One of those rights is to get information about the company. Another is to attend an annual meeting, and vote for the directors," she says. "Shareholders can introduce shareholder resolutions; they can inspect the books and records of companies — so those are rights that investors might forgo, if they decided to divest out of gun companies."

So far, few pensions are doing so, says Alex Brown, research manager for the National Association of State Retirement Administrators.

"Markets today are global, and generally for every seller, there's a willing buyer," he says.

Investors, Retailers Shy Away From Guns; Will It Last?