Accessibility links
Soldiers, With Empathy: U.S. Army Creates Dedicated Adviser Brigades The Army has deployed advisers to foreign military forces for decades. But it has been an ad hoc assignment with mixed success. Now the Army is forming brigades specifically trained to be advisers. 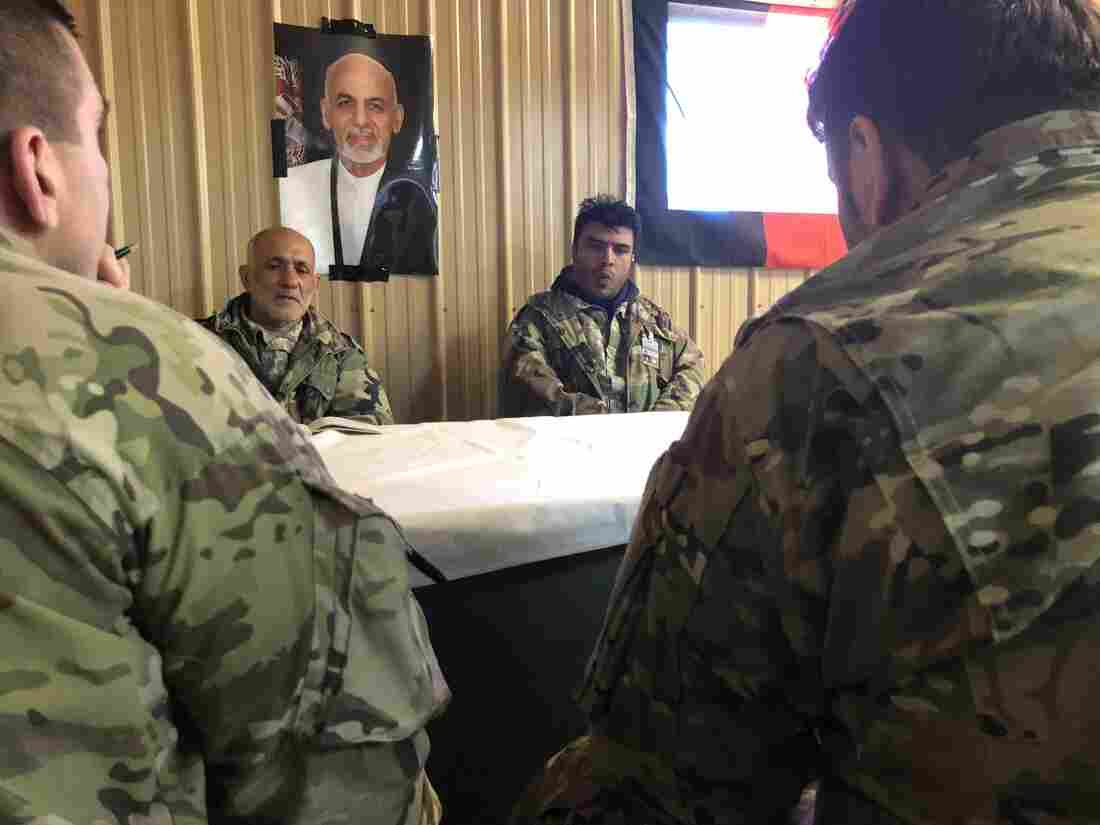 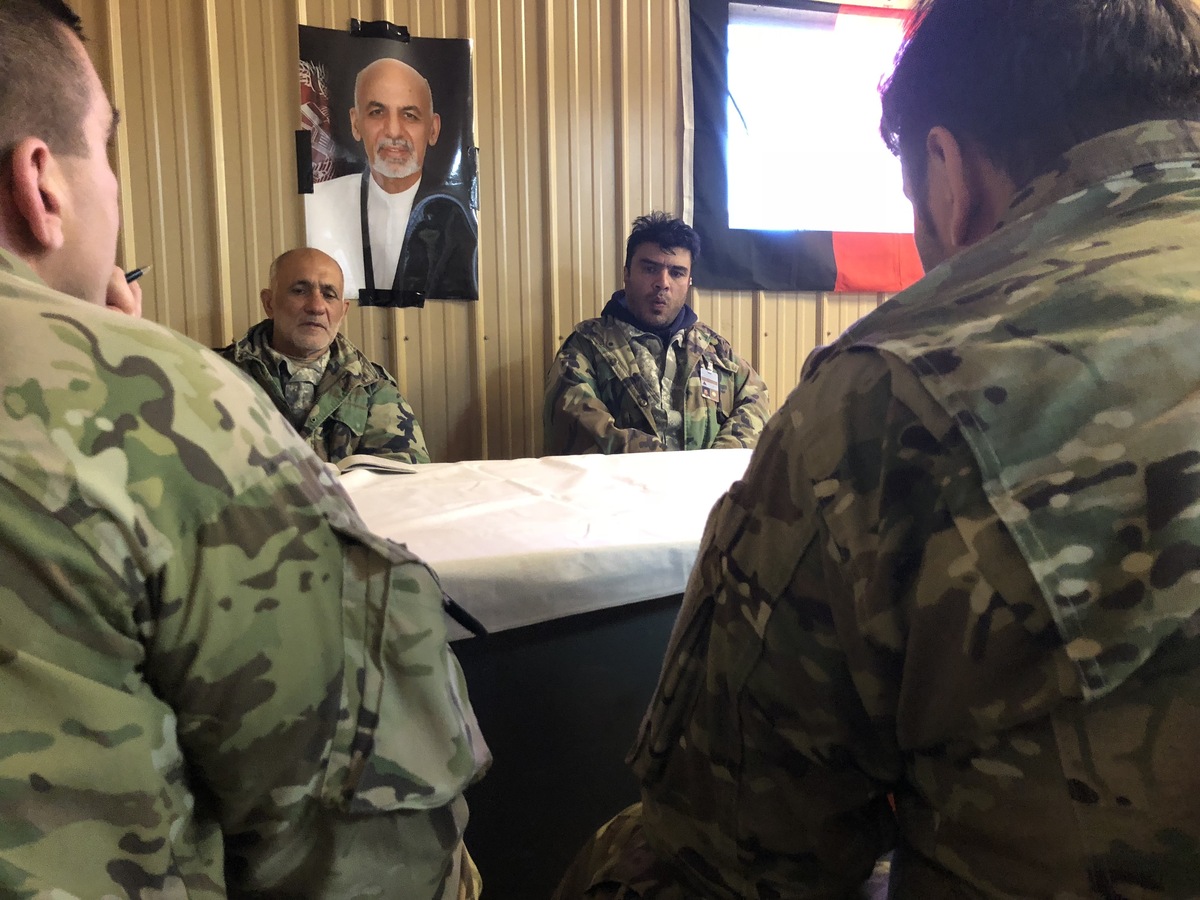 Maj. Jason Moncuse, back to camera on left, meets with actors portraying Afghan village officials. The training exercise at Fort Polk, La., is preparing the 1st Security Force Assistance Brigade for a spring deployment to Afghanistan.

Army Maj. Jason Moncuse sat at a table in a makeshift headquarters with an Afghan actor playing the role of a commander from that nation's army. Through a Dari-speaking interpreter they traded small talk.

"Oh, and if you could, also submit this tourist visa to the U.S.," the commander said.

"Oh, so you want a tourist visa?" said Moncuse.

The chatting wasn't aimless, though. The Army is essentially weaponizing chitchat.

Moncuse is training at Fort Polk, La., for a spring deployment to Afghanistan. He is a member of a new kind of large unit with a mission that American troops have performed for decades: helping troops of friendly foreign nations train and fight.

And it has been deploying advisers to Afghanistan for much of the 16-year-old war there. But the work has mainly been done by troops pulled temporarily from standard infantry units.

The Army wants to shift away from that, because it disrupts those units.

It also believes that permanent adviser brigades will perform better, partly because they're being trained specifically for the role and will have their own command structure. 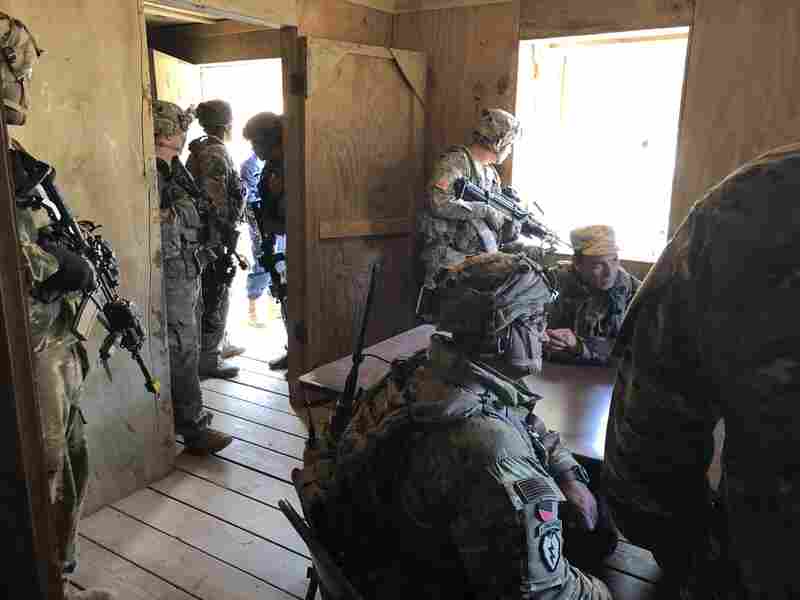 U.S. soldiers with actors portraying Afghan officials as part of their training to be advisers. Jay Price/WUNC hide caption 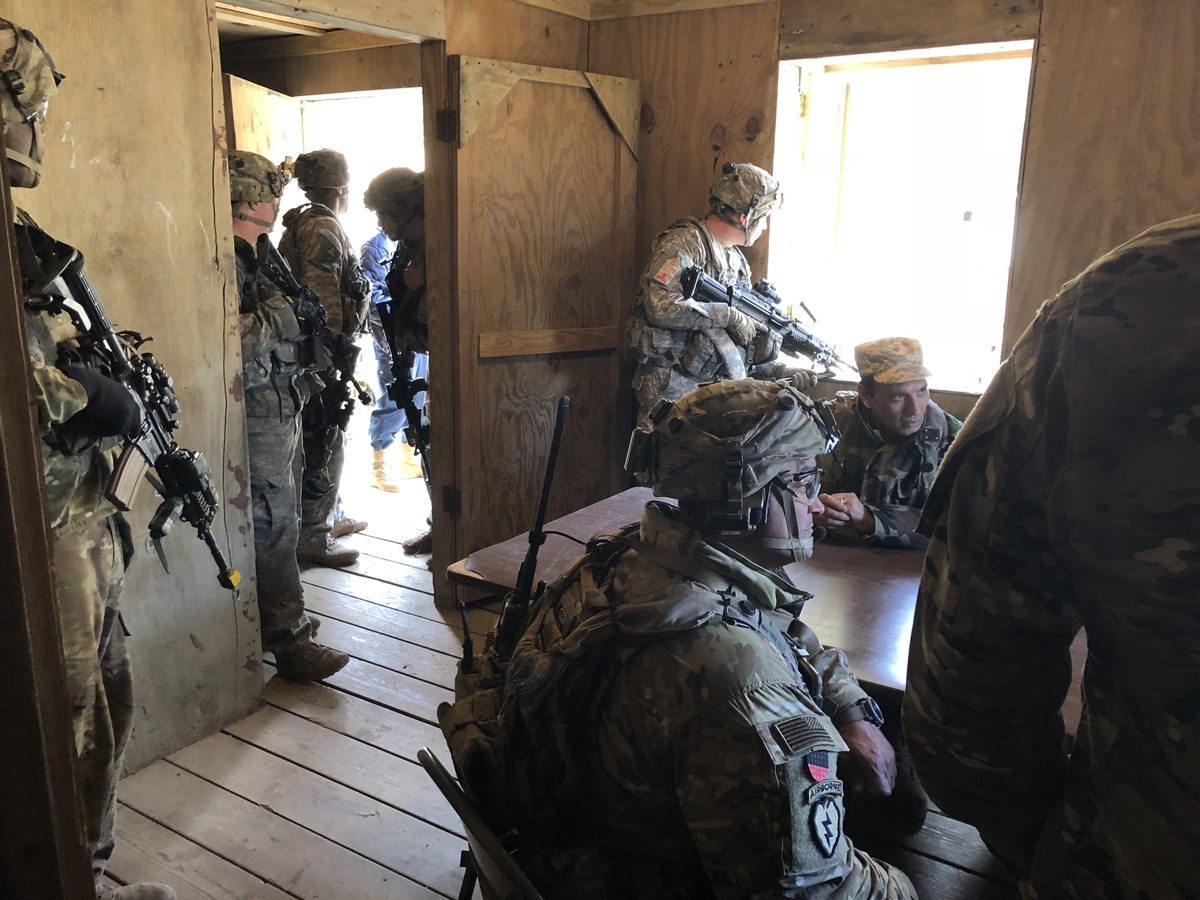 U.S. soldiers with actors portraying Afghan officials as part of their training to be advisers.

A special type of soldier

Col. Scott Jackson is the commander of the 1st Security Force Assistance Brigade, the first of the new adviser brigades, or SFABs.

"We want personality characteristics of empathy and flexibility and patience," Jackson said. "This is kind of built into this organization by the age of the people we hire, largely."

His soldiers have been getting special foreign language training, learning to work with foreign weapons and receiving specialized training in advising.

They are mostly unusually experienced volunteers, most of them combat veterans and many of them with past experience as advisers. They were essentially handpicked.

Maj. Moncuse, for example, is a company commander, a position usually held by captains, one rank lower.

In the SFAB, many roles will be performed by someone a rank higher than normal, or with enough experience to be promoted.

And there are no junior enlisted soldiers, only sergeants and above.

And they're looking for something else that's just as crucial, he said.

"We look for people who are comfortable with being uncomfortable. And that can mean culturally and socially, sometimes."

"Can I borrow this?" Jackson said.

He grabbed a male reporter's hand, and held it as he kept talking.

"A lot of times I'll do this. I walk up to somebody who wants to come into the organization and I'll just grab their hand and I'll start talking to them," he said. "And after I've been talking them awhile I'll do this a little bit," he said, squeezing a little. 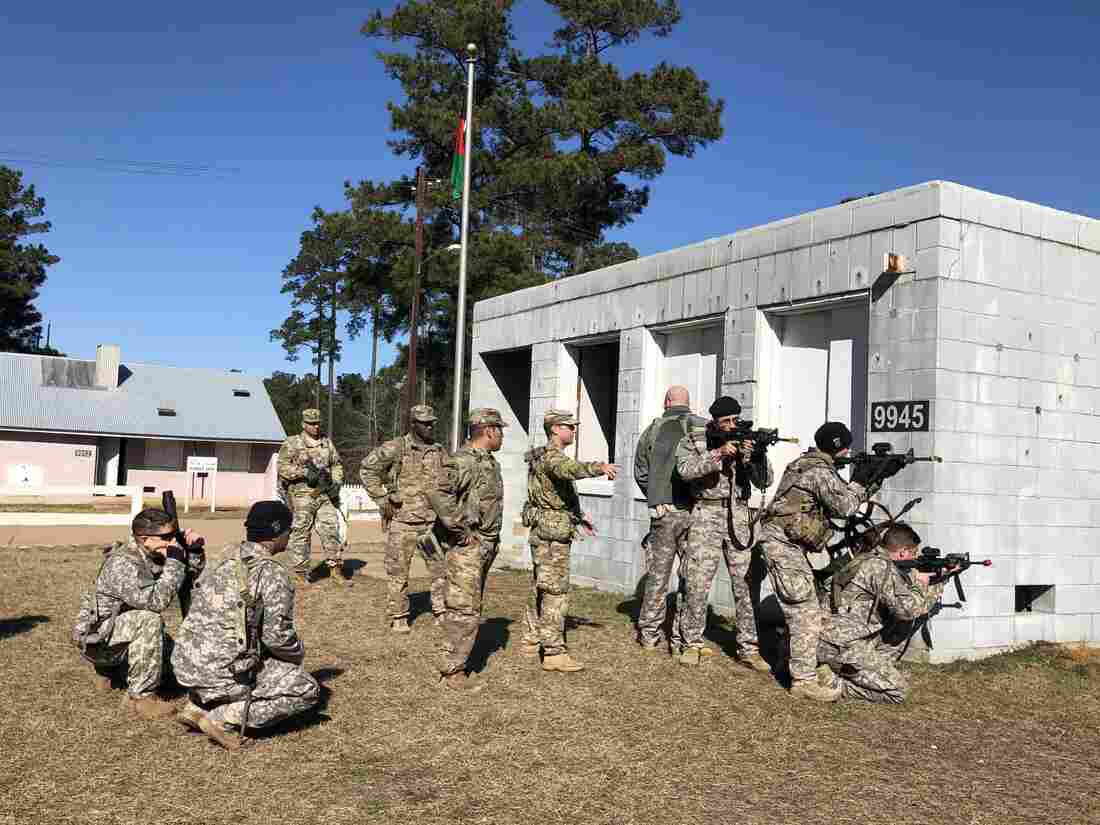 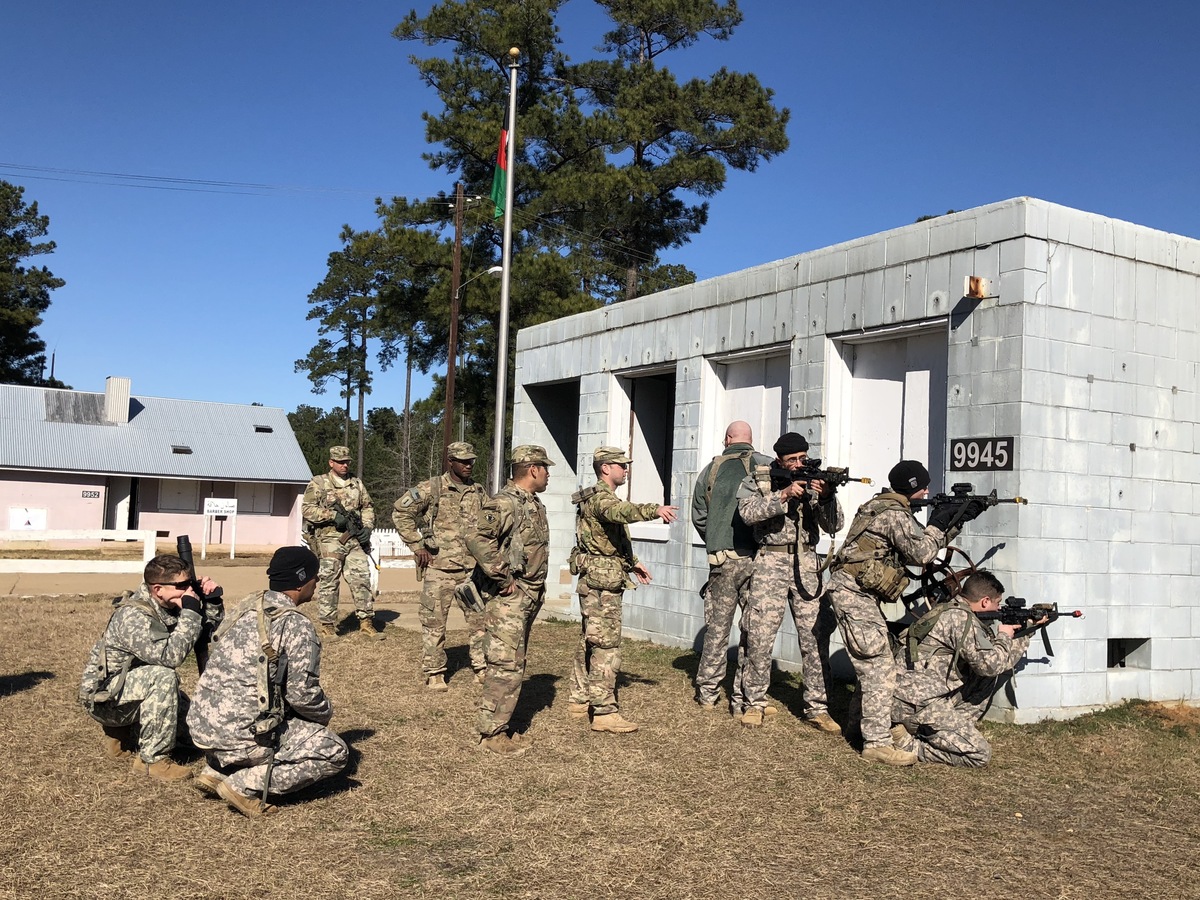 Members of the Army's 1st Security Assistance Brigade train at Fort Polk, La. The Army plans to create six SFABs with about 800 members each.

"If you ain't good with this. If you're a little uptight and you don't understand why. If a soldier can't deal with, it, that's a vital part of Middle Eastern culture.

"It means he's your friend."

The U.S. military and its allies began building the Afghan National Army more than a decade ago, but it still isn't able to stand on its own.

Moncuse's newly-formed unit hopes to help fix that. He volunteered in part because of his experiences as a combat adviser on an earlier deployment to Iraq.

"You get to learn what they're doing, you get to interact with your counterparts on a daily basis and you can actually see changes," he said. "You see that rapport building, you see them doing things they weren't doing before and it's a satisfying experience."

Moncuse expects that being part of the SFAB and integrated at all levels of the Afghan Army will make him more effective this time.

"What I like about this concept is, now you have higher echelons to report to," Moncuse said. "In the past you would just go out, you would do your thing and you would just in send a report, and you didn't have that support network to reach out to.

"But now, with everyone in planning at different echelons, I have a route, an avenue to push forward," he said. "So if we run into an issue I can reach out, I can go to that next higher command who they're advising as well and they can help us, they can follow through, and if we're having issues, paperwork or whatever, they can reach out to then other teams and see if they're having the same problems."

Jackson's brigade is training specifically for Afghanistan, but the brigades are being designed for flexibility so they can be used wherever in the world they're needed.

They won't just be advising. In Afghanistan, the work is putting them out with small Afghan units on the front lines.

Advising is in addition to being a combat-ready soldier, and they are being trained to a higher than normal standard for things like marksmanship, shooting out to distances well behind normal and firing more bullets in training than is typical.

The ad hoc approach to advising — using troops pulled temporarily from standard units — put units and soldiers into roles they might not want, or be suited for.

His soldiers' job this time will be to mentor their Afghan counterparts, helping them hone their fighting skills and improve crucial skills like managing supply chains and casualty evacuation.

"As I tell our guys, the objective is not to go bounding after the Taliban," he said.

The freshly-minted advisers are hoping that building relationships will help things go right in Afghanistan. And they're hoping that rapport will also help when things don't go well.

The exercises at Fort Polk start with relationship building.

Then they move on to planning a mission together, as Moncuse was doing with the Afghan role players in the cobbled-together headquarters. Then the small American adviser teams go out on those missions with the Afghan soldiers.

In one of the training scenarios, the Afghan soldiers entered a village to serve an arrest warrant on a financier with Taliban ties. There are simulated Afghan villages across the sprawling base, staffed with trained role players, tiny markets and even live goats. 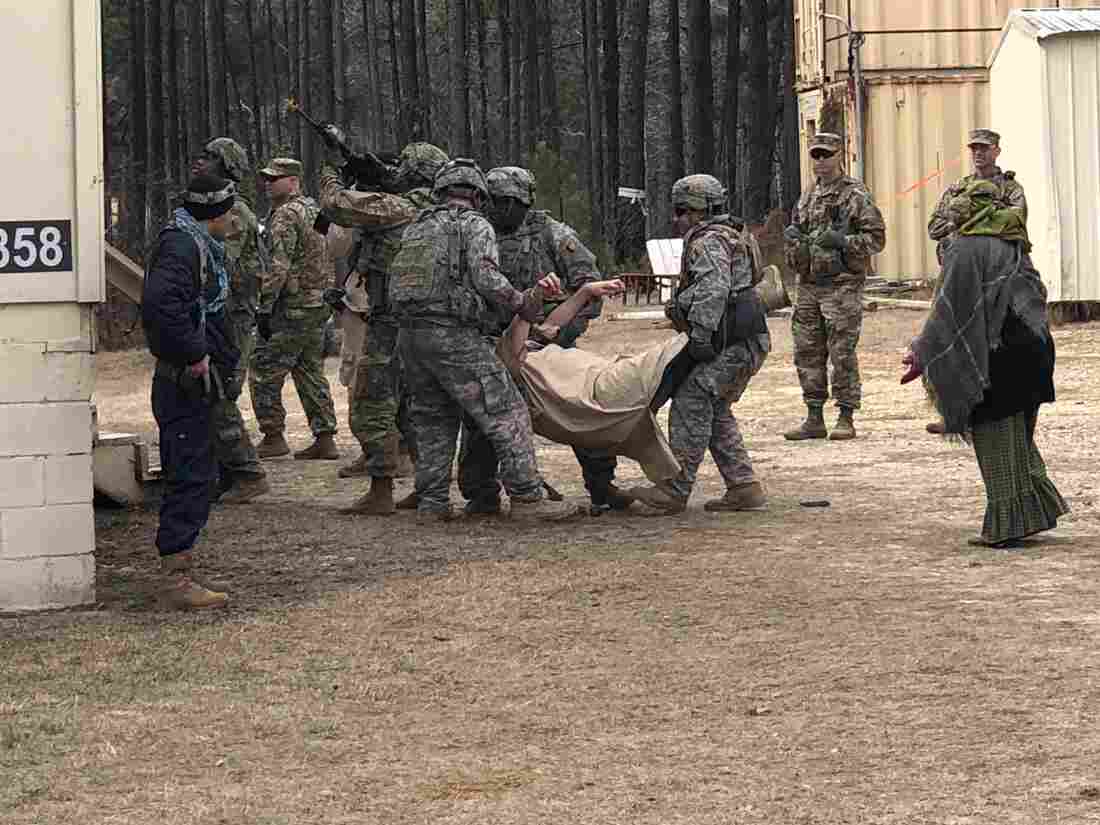 Troops in a training exercise with actors portraying Afghan villagers respond to a mock ambush. The Army unit is training to serve as advisers ahead of a spring deployment to Afghanistan. Jay Price/WUNC hide caption 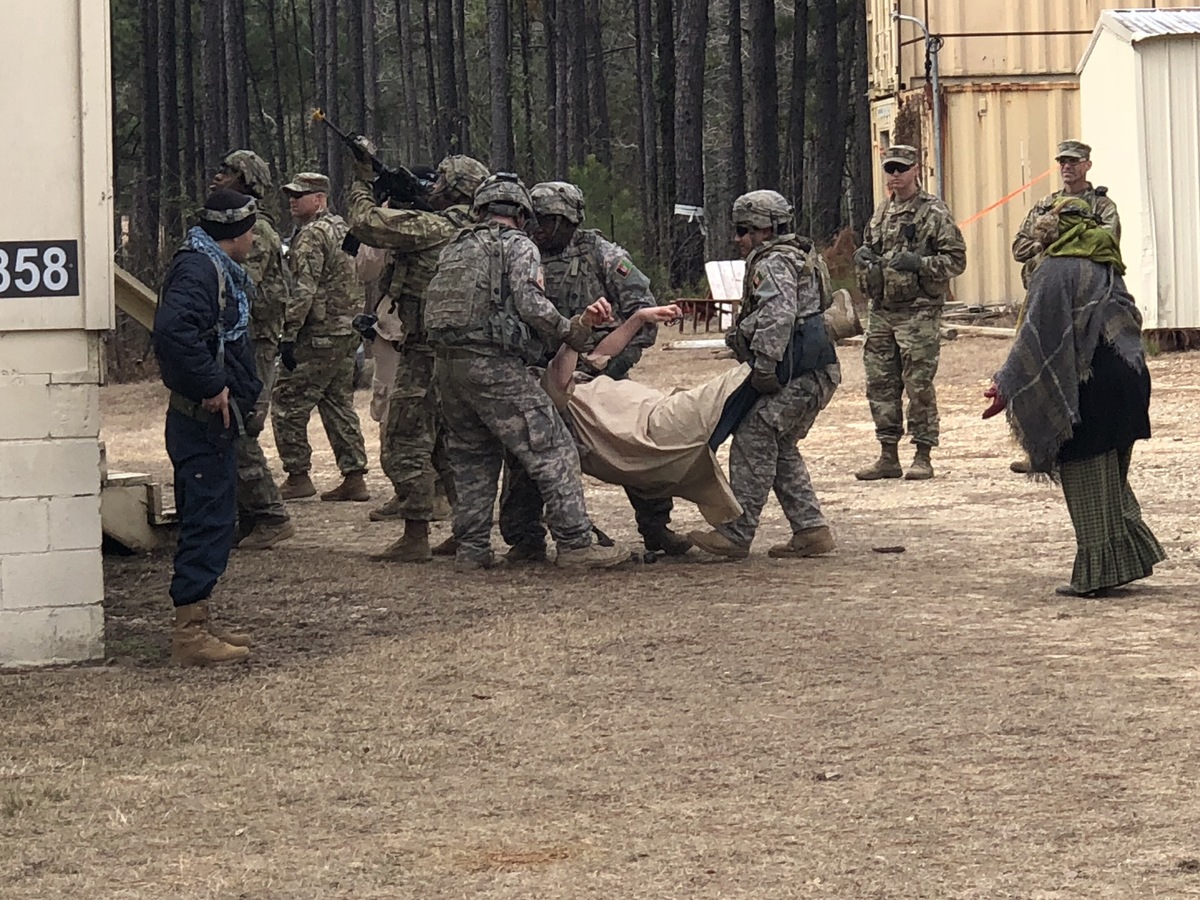 Troops in a training exercise with actors portraying Afghan villagers respond to a mock ambush. The Army unit is training to serve as advisers ahead of a spring deployment to Afghanistan.

"How are you? Please have a seat," he said, through a translator, adding that he was pleased to meet his visitors.

"I'm very happy to see you, too, it's a very nice village," the American commander responded.

Then they engaged in chat about the American officer's family, before eventually discussing the Afghan soldiers' request to search for the wanted man.

This training scenario then went awry for the soldiers: After they got permission to search, there was an ambush. The wide range of casualties — American, Afghan army and civilian — adding layers of complication for the advisers.

The idea behind this kind of training, Jackson said, is to help the advisers learn and practice not just reacting, but helping the Afghan troops they're mentoring react well, and deal with things like casualty evacuation in ways that will work when Americans aren't around to help.

"We always say that when you reach in your kit bag for the tool to solve a problem, first tool you pull out is an Afghan tool, not an American tool," Jackson said.