Accessibility links
The Curious Case Of A Florida Man Who Called Politicians Corrupt, Got Thrown In Fane Lozman's second trip to the U.S. Supreme Court could have far-reaching implications for freedom of speech. 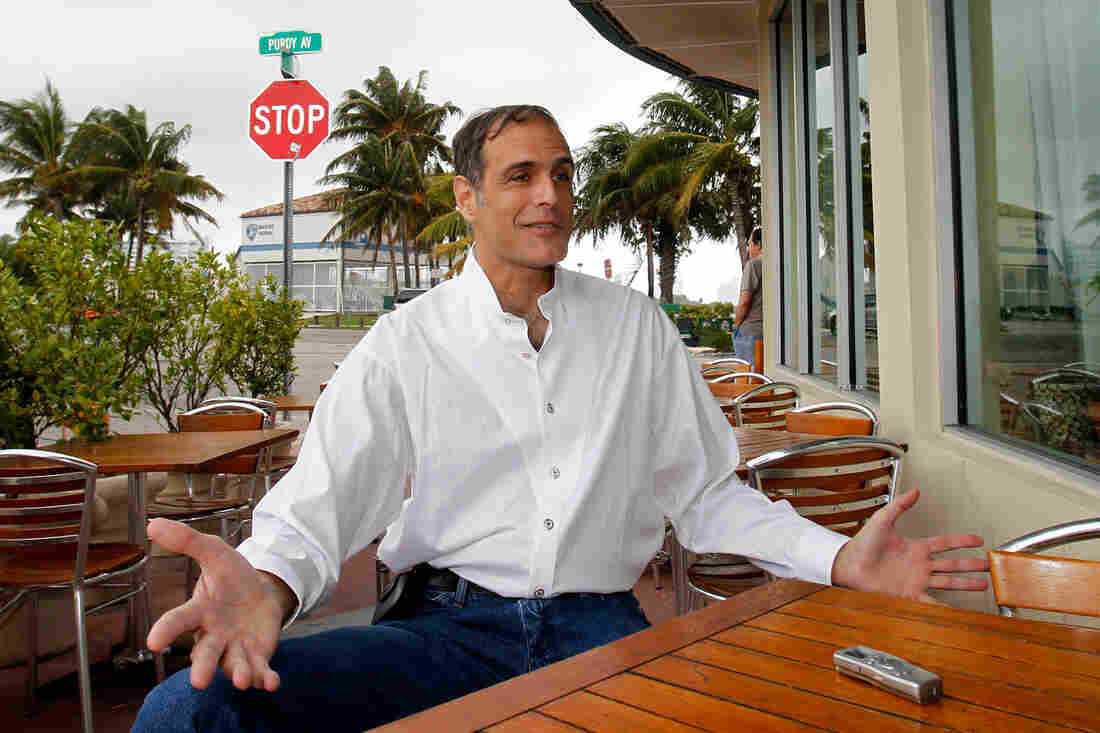 Fane Lozman will make his second appearance before the Supreme Court. This time he has sued the city of Riviera Beach for his arrest at a City Council meeting where he refused to stop talking about government corruption. Alan Diaz/AP hide caption 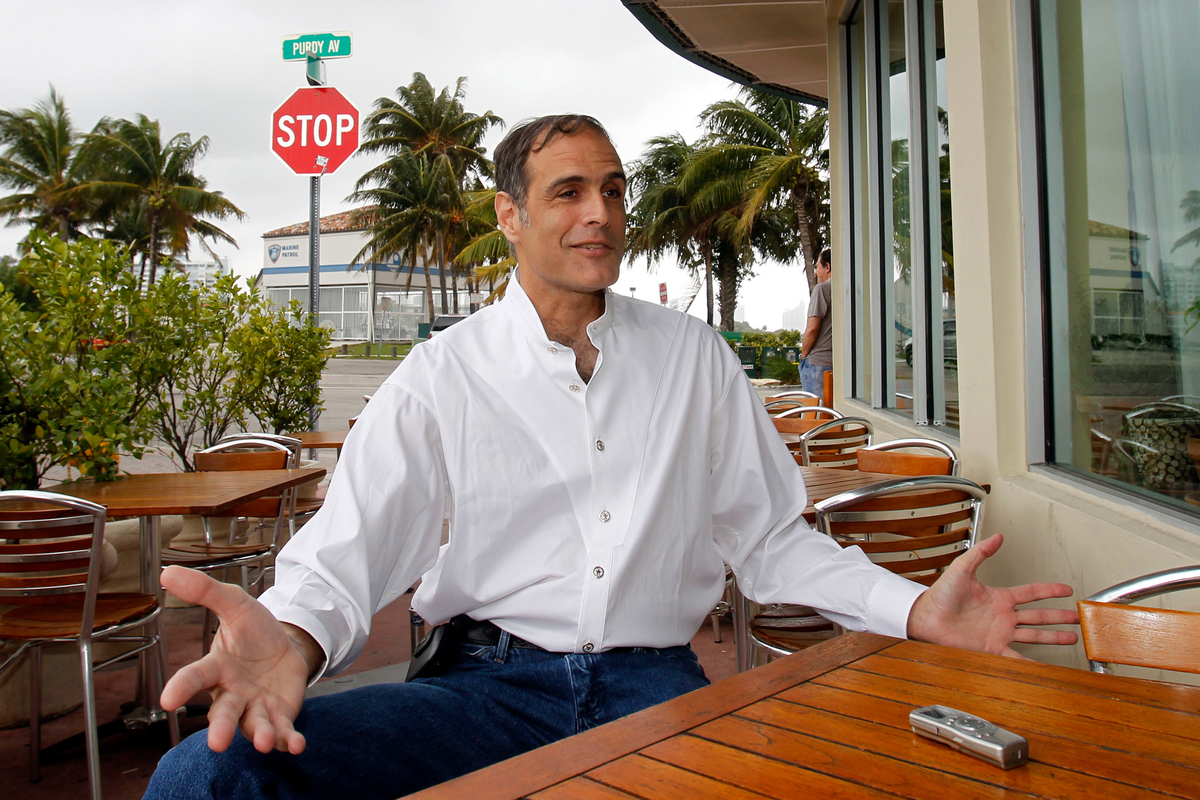 Fane Lozman will make his second appearance before the Supreme Court. This time he has sued the city of Riviera Beach for his arrest at a City Council meeting where he refused to stop talking about government corruption.

It's not that uncommon to hear someone complaining that politicians are corrupt. But you wouldn't expect to be thrown in jail for it.

That's exactly what happened to Fane Lozman at a City Council meeting in Florida.

On Tuesday, that arrest got to the U.S. Supreme Court, and it could have implications not just for Lozman but for the limits of First Amendment protections of freedom of speech.

A video of Lozman's arrest can be viewed here:

Oddly, it's not Lozman's first trip to the nation's highest court. Five years ago, the financial trader won his first case against the city of Riviera Beach when the city seized his floating home to make room for a harbor redevelopment. Today's case could affect a lot more people.

Supreme Court justices on Tuesday seemed to express that they agreed Lozman's arrest may have been unjustified and over the line, but they were having trouble clearly defining the line.

What was the line exactly? Justice Kennedy, for example, asked Lozman's lawyer, but didn't seem to get a satisfying answer.

Kennedy further wanted to know how, if the court got rid of the existing rule — a somewhat obscure Florida law (more on that below) — how they would box off cases like this and still allow police to deal with things like bar fights and demonstrations that turned into riots?

If you can't find a way to distinguish this case from those cases, Kennedy told Lozman's lawyer, you've lost me.

The court doesn't want to be flooded with those cases, he said, so it was looking for a line to draw that could be easily translated.

Back in 2006, Lozman was not exactly a welcome sight for the Riviera Beach City Council. He had managed to scuttle its plans to convert the local public marina into a private one.

A transcript of a closed-door meeting in June of that year shows council members discussing tactics for dealing with Lozman, including the possibility of hiring a private investigator to turn the tables on the city's critic.

"I think it would help to intimidate," Council Chairperson Elizabeth Wade said, adding, "I think they should be questioned by some of our people ... so they can feel the same kind of unwarranted heat."

On Nov. 15, 2006, the dispute between Lozman and the City Council boiled over. During the public comment portion of an open meeting, Lozman decided to speak up.

"They were not in a very good mood," he recalls. "They realized they had to abandon their entire redevelopment plan. ... They were throwing in the towel that night, and that's when I got up to make my public comment, and the chairperson was just livid looking at me."

Lozman started out, "You're probably aware that the U.S. attorney's office has arrested the second corrupt local politician. This time it was former Palm Beach County Commissioner Tony Masilotti."

Chairperson Wade immediately interrupted him: "Fane Lozman, you have the right to say what you want to say publicly, but you will not stand up and go through that."

Lozman persisted, insisting that he had the right to speak. Wade summoned the police officer on duty to the lectern and told Lozman to leave or be arrested.

When Lozman refused to leave, Wade told the officer to "carry him out."

The officer handcuffed Lozman and took him to a holding cell at the local police department, charging him with disorderly conduct and resisting arrest.

The charges were subsequently dropped, but Lozman continued to fume. He sued the city, alleging a number of retaliatory acts, including his arrest at the council meeting.

A jury, though, sided with the city.

A federal appeals court upheld the verdict, concluding there was probable cause to believe that Lozman was violating or was about to violate a Florida law that makes it a second-degree misdemeanor to disturb a lawful assembly.

Lozman hotly disputes that characterization of his conduct.

"I did maintain order," he said. "Disorderly conduct relative to a public meeting is if you go beyond your three minutes, if you use profanity, if you're screaming or yelling. I was doing none of those."

He maintains instead that what the council chairperson objected to was the content of his speech.

"If she didn't want to listen to that content, she shouldn't run for public office," he said, "because the First Amendment protects comments that are critical and maybe comments people don't like to hear."

Lozman added that this Supreme Court case is far more important than his last one.

"If I lose, then police and municipalities and the final policymakers who run the city, they're immunized," Lozman said. "They can just come up with any bogus misdemeanor arrest to remove you from making your public comments."

As the briefs in the case indicate, Lozman's experience is hardly unique.

Indeed, more than two dozen media organizations have filed a brief pointing to similar problems encountered by reporters and photographers engaged in everything from investigative journalism to covering demonstrations.

While arresting journalists for critical coverage may be the hallmark of repressive regimes, and rarely happens in the United States, the brief observes, "It does happen."

The brief, points, for instance, to Arizona Sheriff Joe Arpaio's arrest of the publishers of the Phoenix New Times for publishing articles that probed the sheriff's commercial real estate holdings.

The city of Riviera Beach declined NPR's request to discuss its case, but in written briefs filed with the court, the City Council, backed by the Trump administration, contends that the police officer was justified in arresting Lozman, even if Lozman's speech was perfectly legal.

The city argues that in the context of law enforcement, an open-ended right to sue for false arrest would be chaotic, expensive for municipalities and dangerous.

Consider this example, the city argues: A police officer sees someone illegally driving a van through the parking lot of a federal building with a sign that says, "Remember the Children of Waco."

The police officer might reasonably decide to arrest the driver, rather than just issue a citation, thus buying time to determine whether the driver is a concerned citizen or another Oklahoma City bomber.

Lozman's lawyers, in their briefs, counter that the defendant here isn't the individual police officer; it's the city. The arrest did not occur in the field, but occurred while Lozman was "calmly speaking during the public comment portion of a city council meeting" and that what he said "provided no basis for the arrest."