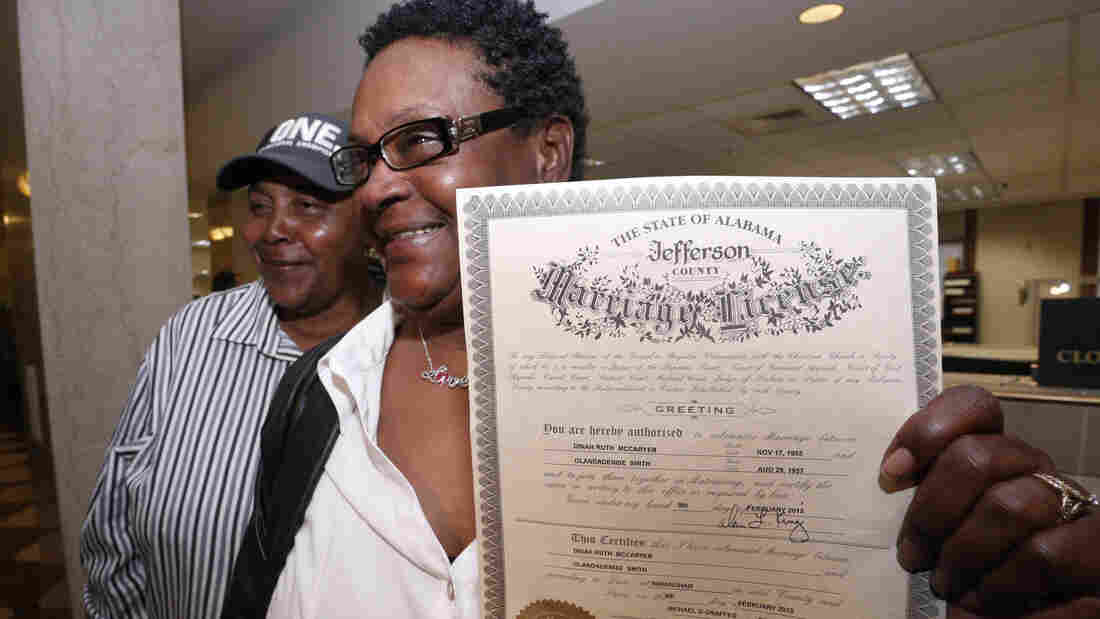 Olanda Smith (left) and Dinah McCaryer were the first to marry in Jefferson County on Monday, Feb. 9, 2015, after a federal judge overturned the state's ban on same-sex marriage. Several other counties refused to issue marriage licenses that day. Hal Yeager/AP hide caption 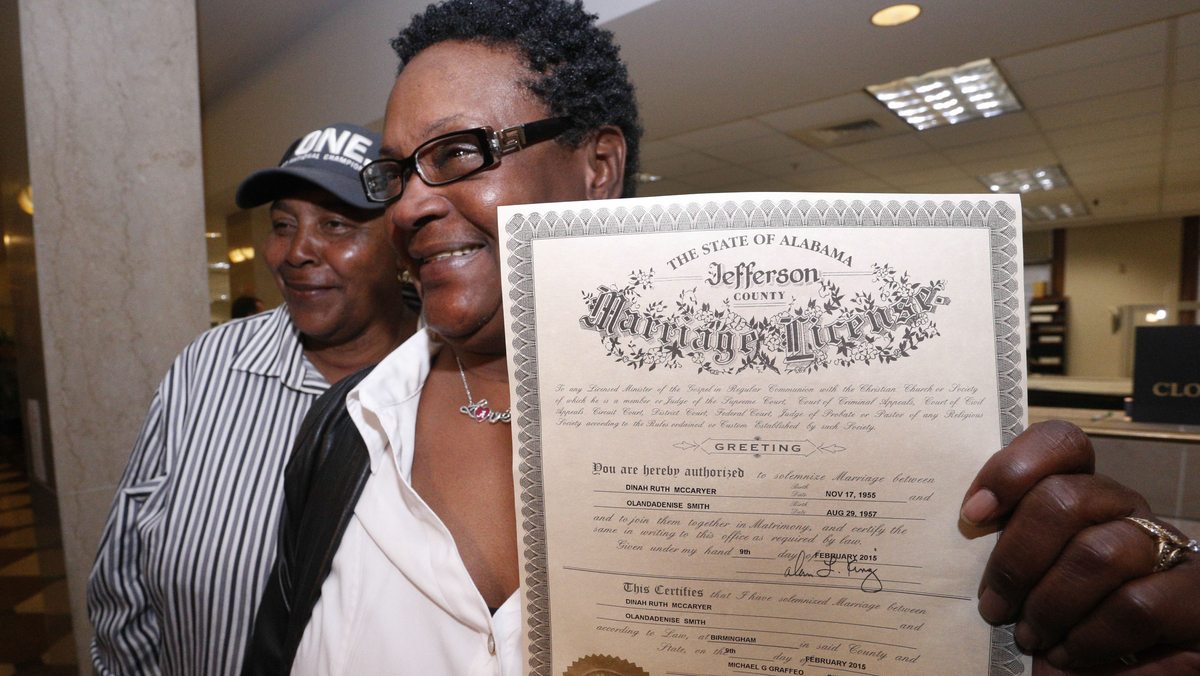 Olanda Smith (left) and Dinah McCaryer were the first to marry in Jefferson County on Monday, Feb. 9, 2015, after a federal judge overturned the state's ban on same-sex marriage. Several other counties refused to issue marriage licenses that day.

Couples – gay or straight — looking for a marriage license in Pike County, Ala. won't get one from local probate judge Wes Allen.

For Allen, the decision came down to his religious beliefs.

"I believe marriage is between a man and a woman and firmly believe that biblical world view," he says. "And I couldn't put my signature on a marriage license that I knew not to be marriage."

As many as 12 other judges adopted similar policies after the U.S. Supreme Court legalized same-sex marriage. Some, like Allen, closed their marriage license division. Others will sign the license but quit performing marriage ceremonies.

Now Alabama and several other states are considering doing away with marriage licenses altogether. Alabama's legislation comes after the state became a flashpoint in the debate over same-sex marriage.

After counties began refusing licenses, they braced for lawsuits. But no one has sued — that could be because Alabama's marriage law says probate judges may issue marriage licenses, not shall.

"Alabama's been one of the toughest states when it comes to access to marriage equality because of our marriage code and because the way it's written for judges to choose to issue licenses or not," says Eva Kendrick, state director for the Human Rights Campaign, which advocates for LGBT rights.

She says access depends on where you live. Metropolitan areas like Birmingham and Montgomery are open for business, but remote rural areas are more of a patchwork, forcing people to travel elsewhere to get a license.

"In those counties Alabamians did not have equal access to marriage," says Kendrick.

The state Senate has overwhelmingly approved a bill that would get rid of marriage licenses altogether. Instead, couples would submit a form affirming they've met the legal requirements for getting married and then record a marriage contract at the probate office.

"Basically we're getting Alabama out of the marriage business," says Republican Rep. Paul Beckman, who is sponsoring the bill in the Alabama House, where it has passed the Judiciary Committee.

Republican state Sen. Greg Albritton has tried for several years to change the system to a marriage contract.

"It allows the probate judge to not be the gatekeeper by order of the state of say who can marry and who can't," Albritton says.

Albritton says he's a traditionalist who believes marriage should be between one man and one woman. But he says since the U.S. Supreme Court legalized same-sex marriage, Alabama's system hasn't worked.

"I disagree with that opinion. However, they make the law," says Albritton. "I'm trying to accommodate that and trying to find a way that we can accommodate as many people and hurt no one."

But not everyone agrees that the legislation does no harm.

"I just think it cheapens the value of the most sacred relationship in the world," says Republican Phil Williams, the lone senator to vote against the bill.

"When you take marriage and you reduce it to a mere contract, it's almost like you're just doing nothing more than recording the deed to your property at the courthouse," he says. "You're just taking the contract down there and the probate judge is just the clerk."

He says probate judges have greater responsibility, for instance, they're charged with making sure that couples are old enough and able to consent to marriage.

The bill is facing more opposition in the Alabama House. Democratic state Rep. Merika Coleman says the change isn't necessary if public officials would just do their jobs.

"It's unfortunate because there are some probate judges .... that do not want to adhere to the rule of law," says Coleman. "So because of that, now some legislators in the state of Alabama want to get out of the business of marriage in the traditional sense."

She's concerned the new system might not be recognized by other states or the federal government.

But the concept of a marriage contract is being considered in other states. Similar legislation has been proposed in Oklahoma, Indiana, Kentucky, Missouri and Montana.