Accessibility links
Thanks To 'Trump Slump,' Shops Have More Guns Than Buyers After a dramatic increase in sales, an over-saturated market and politics are contributing to lagging gun sales. Some manufacturers are reporting drops of up to 70 percent. 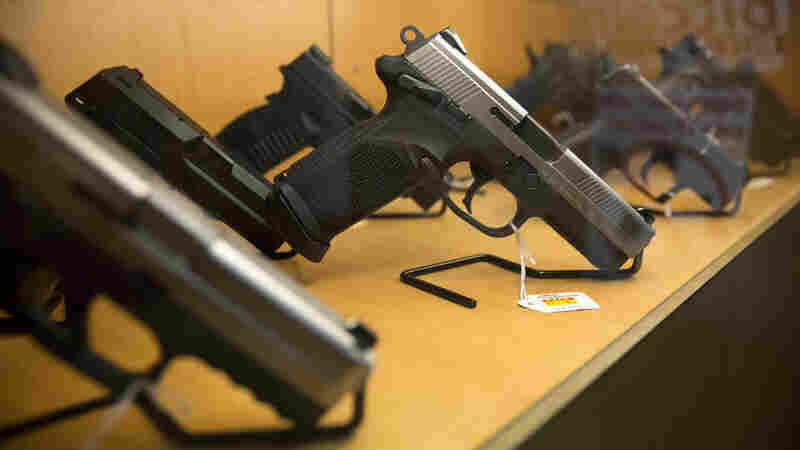 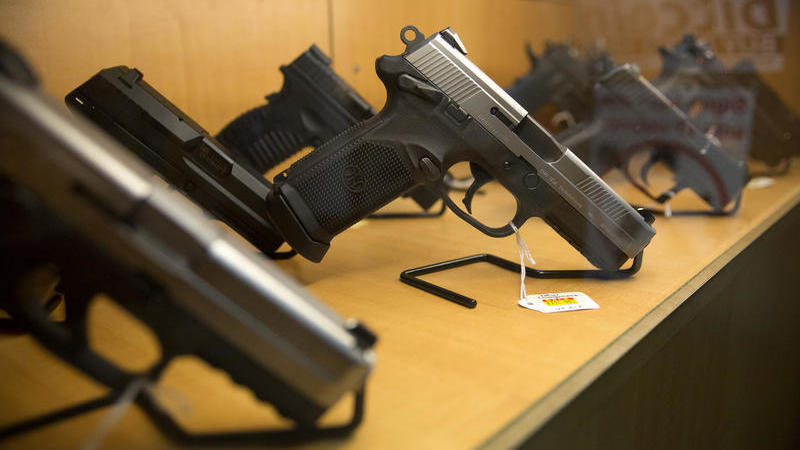 Firearms have been in the news again as calls for increased gun control measures resurface. But the gun industry has been going through it own ups and downs — just last week when firearms giant Remington said it would file for bankruptcy. And they aren't the only company facing increasingly difficult challenges as market demands shift.

He shows a Ruger 308, saying "these were very difficult to get while Obama was in office."

His inventory is fully stocked, a far cry from how it was a few years ago, when he'd have to beg and plead with manufacturers to get him the inventory when the demand was high. Now the tide has turned.

"Now they are offering wonderful deals," Cargill says. "You buy six of these you get one gun free."

Cargill says he still moves a lot of product, but the prices are lower than they were before, and that has to be hurting the manufacturer. It all goes back to a boom in the industry that started nearly a decade ago, when sales that hit a 60-year high.

Jurgen Brauer, an emeritus professor of economics at Augusta University in Georgia who studies the arms market, says the rise in gun sales during the last decade is unprecedented.

And Brauer's analysis lines up with what the federal government has seen. According to the FBI, 8 million background checks for firearm purchases were run in 2005. That number skyrocketed to 25 million in 2017. Analysts concluded the sales boom was this perfect storm — a mixture of regulatory fears on the part of buyers, military technology trickling into the civilian gun market, and also consumers simply having more buying power in the aftermath of a recession.

"Part of it, certainly after the financial crisis had ended is recovery of the U.S. economy. So incomes are recovering and its only to be expected as people have more disposable income that people buy all kinds of things, and if you are interested in firearms you buy firearms," Brauer says.

But all is not well in the firearms market. Gun companies have recently seen a sharp decline in sales something many refer to as the "Trump slump." Robert Farago, a gun enthusiast and blogger for the website The Truth About Guns, says gun companies made a critical mistake during 2016.

"The gun manufacturers ramped up production," he says. "They figured this is it – the motherlode we are gonna get another one just like we did the Obama surge. We are gonna get a Hillary surge. It didn't happen."

"So you put those two together, you have a 40 percent increase in production and a 20 percent decrease in demand and you have sliding prices and you also have people buying guns who say 'I've had enough now, I've bought enough guns,' so the market has gone down because of that."

And financial reports show this pretty clearly. The stock price for American Outdoors, formerly known as Smith & Wesson, was at a five-year highs right before the 2016 election. Since then, the company's stock has plummeted by nearly 70 percent. Ruger, another gun manufacturer, followed a similar trajectory, with its stock dropping by 40 percent in the same time period.

This has caused some companies to explore lines of business other than firearms, such as clothing, camping equipment and firearm accessories. One salvation for gun companies is the market for highly-regulated items, such as short-barrel rifles and suppressors. The Bureau of Alcohol, Tobacco, Firearms and Explosives requires hefty amounts of paperwork for buyers of these items. James Willi, an attorney in Austin, specialized in helping customers with that paperwork. It soon turned into a business.

"Some of the dealers started seeing my work, and they started asking me if I wouldn't mind occasionally doing a gun trust for one of their customers," Willi says. "And occasionally the phone would ring. And then little by little the phone would begin to ringing and more dealers started asking if I didn't mind doing trusts for their customers as well."

The ATF keeps tabs on items like suppressors. In 2014, about 600,000 suppressors were registered. Last year that number ballooned to over 1,300,000. Willi says however that it's still a small market for companies to rely on.

Meanwhile, the firearms industry is hoping to mitigate some of those barriers for potential customers. Last year a bill known as the Hearing Protection Act was introduced in the House of Representatives. That law would make it easier to buy suppressors. Likewise, companies have recently found a way to work around a ban on short-barrel rifles by creating an accessory that, once attached to a gun, technically classifies the weapon as a handgun. They're all ideas that may bring new life to an already oversaturated market.