Accessibility links
How Movie Darling Mary Pickford Became The Most Powerful Woman In Hollywood The producer, studio head and Oscar-winning actress would have been the envy of today's industry women. How did she get all that power a century ago? It started with her popularity as a star.

Listen · 7:19 7:19
How Movie Darling Mary Pickford Became The Most Powerful Woman In Hollywood 7:19 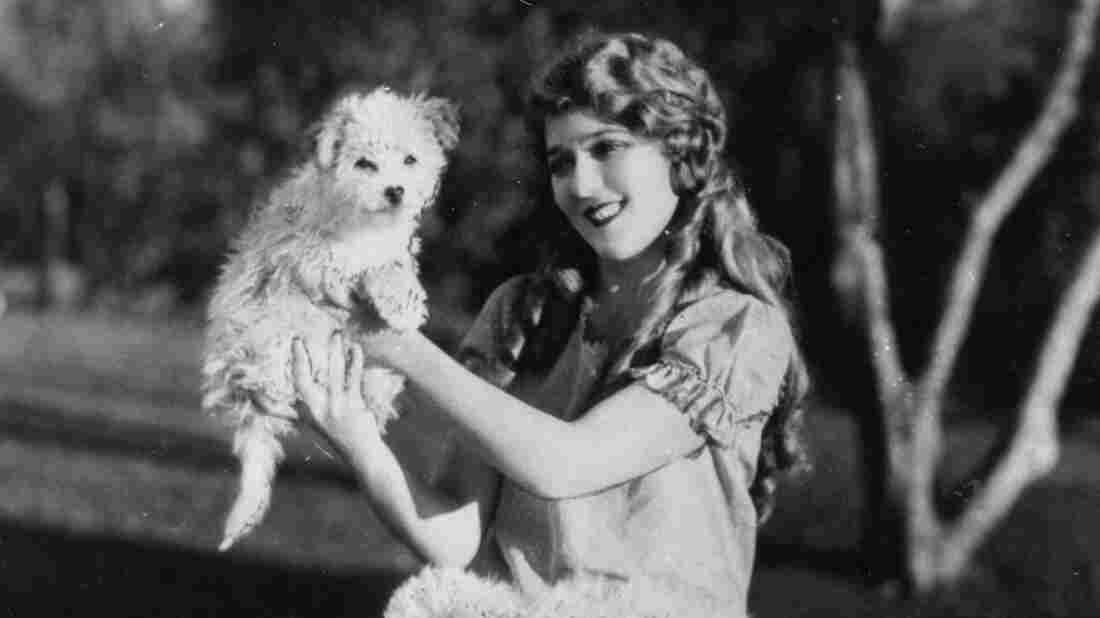 In the 1910s and '20s, actress Mary Pickford was known as "Blondielocks" for her golden, sausage-like curls. General Photographic Agency/Getty Images hide caption 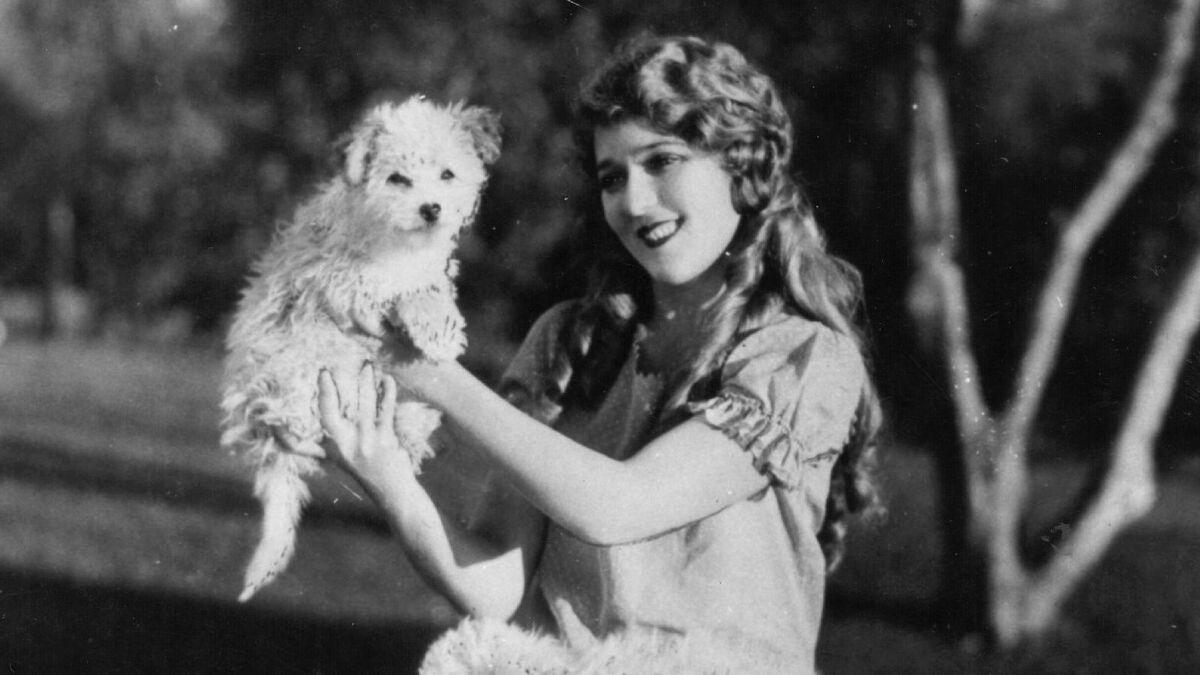 In the 1910s and '20s, actress Mary Pickford was known as "Blondielocks" for her golden, sausage-like curls.

One hundred years ago, the most powerful woman in Hollywood was a producer, a studio head and a major force onscreen.

Mary Pickford was a founder of the Motion Picture Academy and much admired for her philanthropy. But before all that, she was a darling of the silent screen. In her 20s, Pickford became famous playing 14-year-olds. Her characters were always sweet, virginal, waifish girls. Scott Eyman, author of Mary Pickford: From Here to Hollywood, describes the actress's typical character as "eternally feminine, but wouldn't allow herself to be pushed around by anybody."

Cari Beauchamp, resident scholar at the Mary Pickford Foundation, says Pickford played "a girl with spunk, a girl with backbone. ... She can be poorer than dirt and literally be covered in dirt, and yet she stands up for what is right, she stands up for her community and she has a sense of self that is universal and timeless."

In her heyday (1912 to 1925), they called her America's sweetheart and "Blondielocks," for her golden, sausage-like curls that went down to her shoulders. According to Doe Mayer, the Mary Pickford professor at USC's School of Cinematic Arts, a lot of those curls weren't real. "They bought hair from, ostensibly, prostitutes and built hair pieces for her ringlets," she says. Still, when Pickford auctioned one of her curls off for the World War I effort, it went for $15,000.

Eventually, the actress tired of playing little girls and cut the curls off. "You would have thought she'd murdered the American eagle," Eyman says. That's how much fans all over the world adored her sweet, innocent little girl image. At just 5 feet tall, Pickford portrayed it so convincingly — all without speaking a single word that audiences could hear.

In fact, when movies began to talk, Pickford disapproved. According to Mayer, "She thought that sound was a terrible idea, that movies were an art in the silent form. And she said it was like putting lipstick on the Venus de Milo." She tried it anyway — her first talkie was Coquette (1929), about a Southern belle, her unsuitable sweetie and a murder. Pickford won an Oscar for her performance, and four years later she gave up acting. Still, she continued to be a major force in the industry. 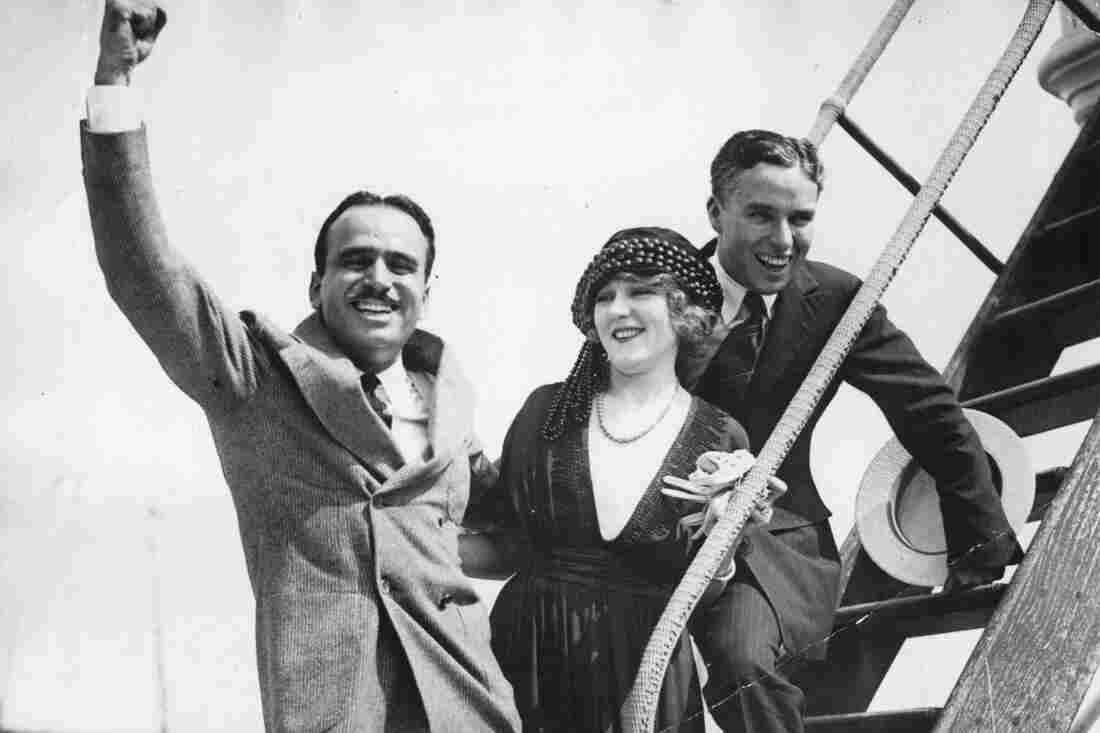 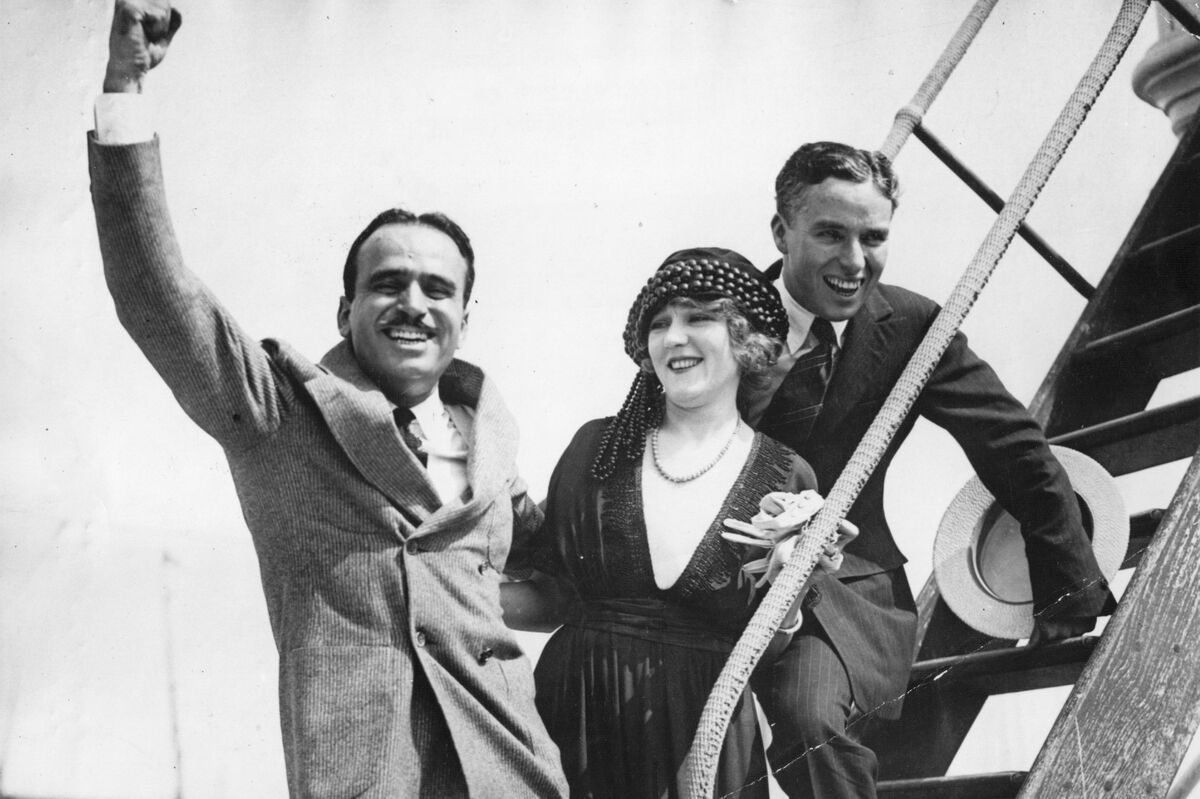 In 1919, she co-founded United Artists with movie pioneers Charlie Chaplin, D.W. Griffith and Douglas Fairbanks (whom she married the next year). The goal was to make and distribute their own films, and then rake in the profits. They built a big office building in Los Angeles (today it's an Ace Hotel), and the adjacent theater — ornate, Spanish Gothic, with murals, sculptures and lobby fountains — was for showing their films.

Pickford supervised every inch — even the toilets in the ladies' room are pink! It was a movie palace. "They called the actors the kings and queens of the industry," Mayer says.

Before United Artists, Pickford had launched her own royal playground — the Pickford-Fairbanks Studio, where she OK'd scripts and hired directors, writers, cast and crew. She would have been the envy of today's industry women.

How did she get that power, a century ago? It started with her popularity as a star. Biographer Eyman says: "She leveraged her box office in a way that most actors didn't. She saw herself as a franchise and she demanded more and more and more."

According to scholar Beauchamp, in 1909 Pickford was making $10 a day. By 1919 she was making $250,000 a film. "Ten years, poof!" Beauchamp says. "But she didn't just accept being a star; she took that power and became a producer, became a company owner and became an owner of the theaters themselves and of a studio lot."

No casting couch for Pickford — she owned the couch. "You didn't mess with Mary," Beauchamp says. 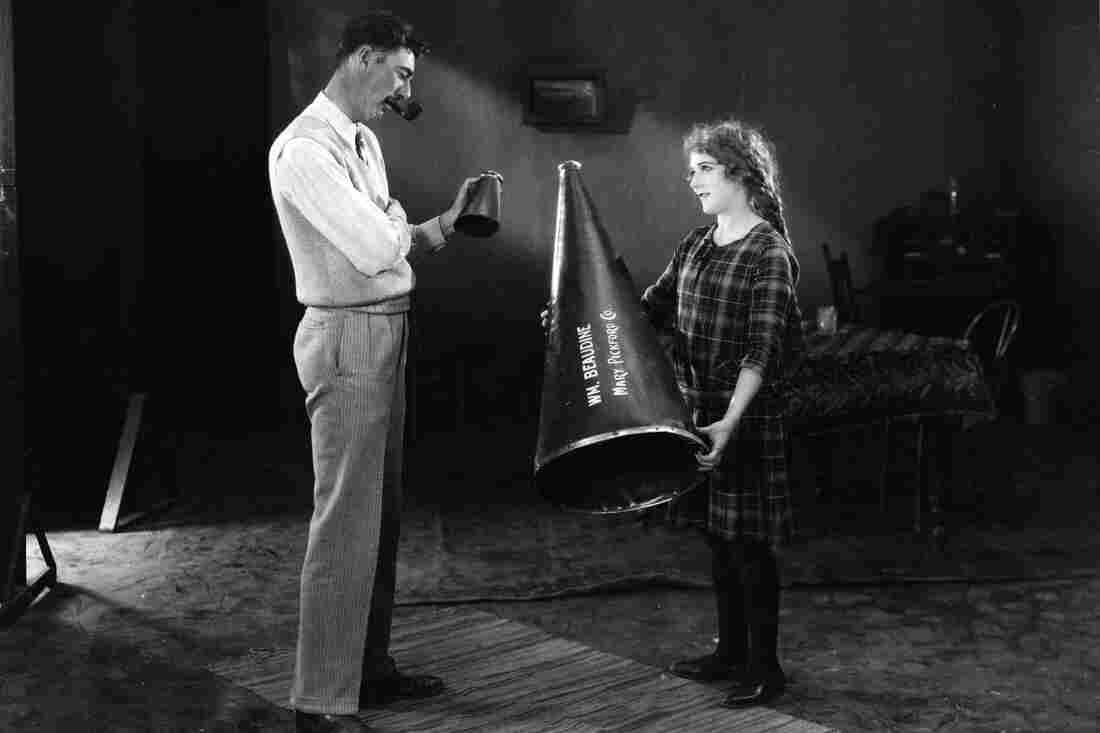 Pickford and director William Beaudine pose on the set of 1925's Little Annie Rooney. According to scholar Cari Beauchamp, if Pickford clashed with her director, she was careful to criticize him in private, and not on the set. Hulton Archive/Getty Images hide caption 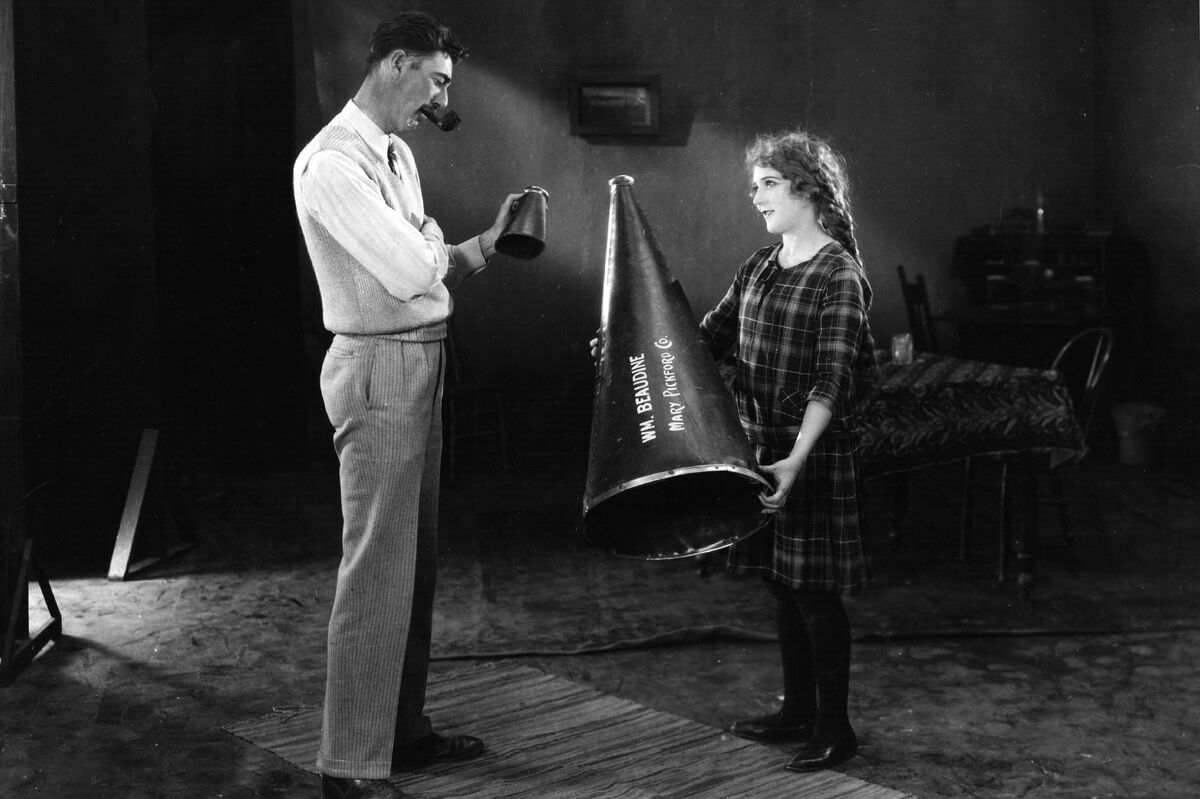 Pickford and director William Beaudine pose on the set of 1925's Little Annie Rooney. According to scholar Cari Beauchamp, if Pickford clashed with her director, she was careful to criticize him in private, and not on the set.

By many accounts, she used her power with savvy grace. If she clashed with her director, she would never criticize him on the set. "You can imagine, 1924, the man taking direction from his star," Beauchamp says, "but she was very cognizant of this and that's why whenever she criticized someone, it was in private."

A Retirement Community Where Hollywood Takes Care Of Its Own

She was a woman of compassion and generosity. On every set, Pickford hung a bucket and asked everyone working to put some money in for industry people who had no work. She organized the Motion Picture Relief Fund, and her foundation supports film preservation and many charities.

Her philanthropic work is amazing given her background. Mary Pickford was born Gladys Louise Smith in Toronto. There was no money and her absentee father was an alcoholic, so she had to start working in theater when she was 6. "She was just very attuned to human misery," Eyman says. "And I suspect [that's] because she'd grown up in human misery and she didn't forget it."

What would she make of the issues being raised today by women in Hollywood? "I suspect she'd think they were silly," Eyman says. "I suspect she'd ask them, 'Why do you need each other? Why can't you stand on your own two feet? I didn't need anybody else when I founded United Artists ... because it would give me more control over my life and my career and, incidentally, make more money. Why do you need the protective umbrella of each other?' "

Beauchamp disagrees. "I think Mary would be thrilled," she says. "In the early days of Hollywood, women were a critical mass. Remember, up until 1929, half of all films were written by women. There was a very lively, committed group of women who took care of each other professionally, but also personally. And that in so many ways is what's happening today. Women have stood up and talked and found life-changing strength in that community, and there's nothing like that."

Mary Pickford put her success to work for her own benefit and the benefit of others. So much has changed, but today's stars — and other women in the film industry — might use Pickford as a playbook.

A previous Web version of this story incorrectly said that Mary Pickford had won an Oscar 100 years ago. The Oscars were first awarded in 1929; Pickford won one in 1930.