Accessibility links
Polling Places Are Supposed To Be Politics-Free. Could That Change? Polling places are a politics-free zone. Could that change with a Supreme Court case out of Minnesota? The court is hearing arguments in a key case on this Wednesday. 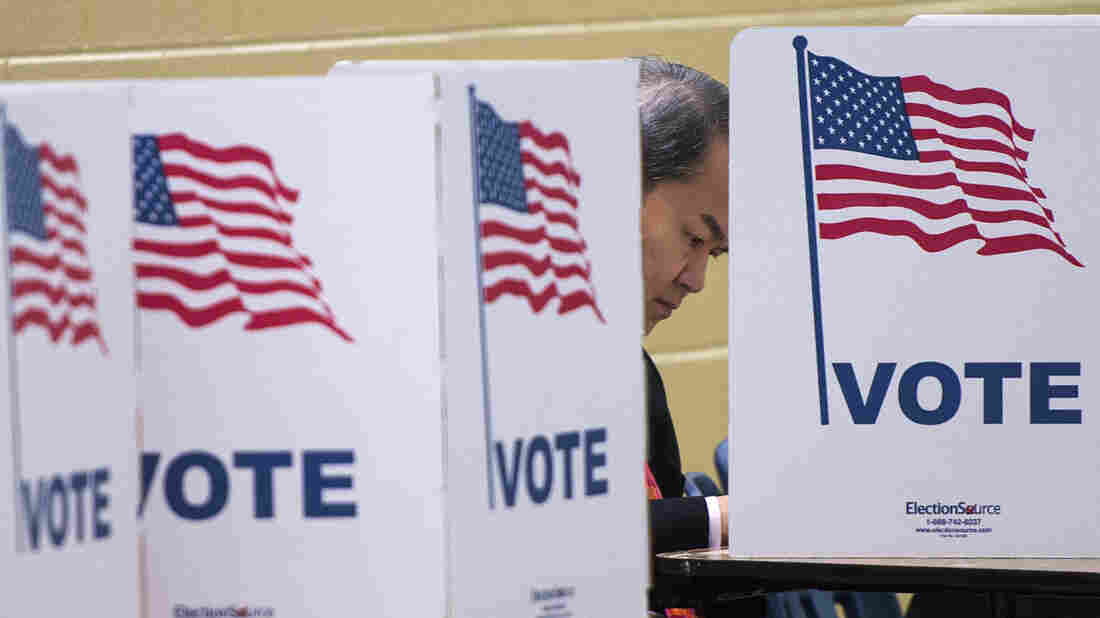 Currently, polling places are largely a politics-free zone, but the Supreme Court heard arguments that could change that. Andrew Caballero-Reynolds/AFP/Getty Images hide caption 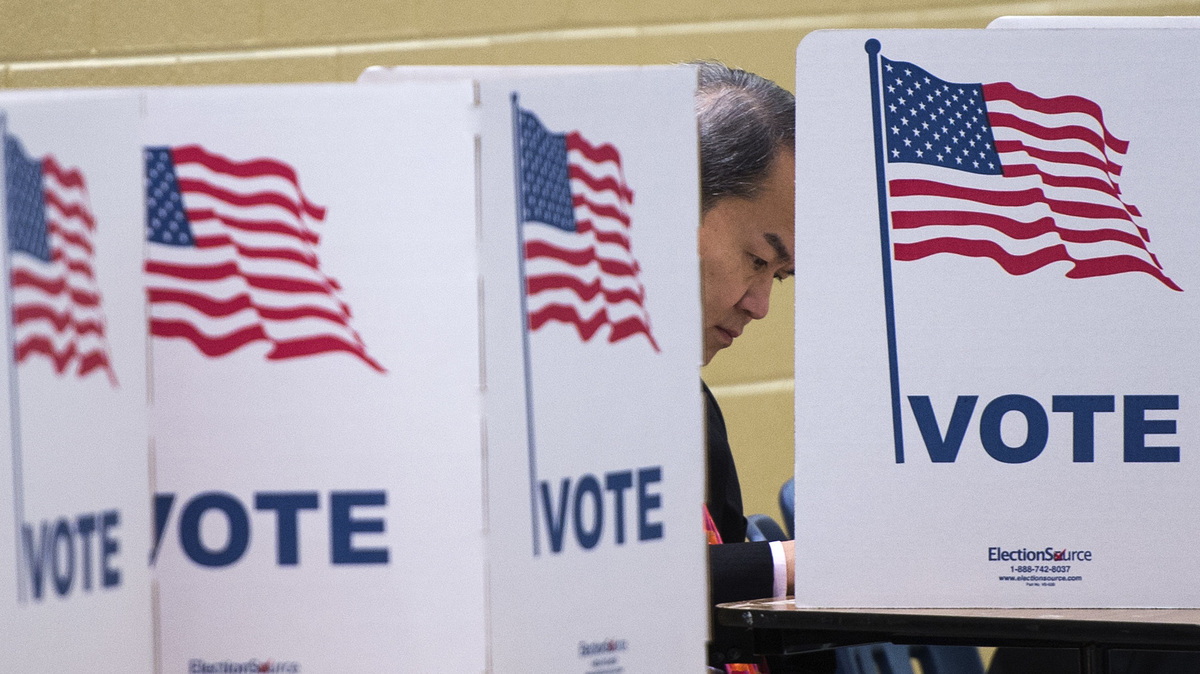 Currently, polling places are largely a politics-free zone, but the Supreme Court heard arguments that could change that.

Every state has a law creating campaign-free buffer zones outside of polling places — laws the Supreme Court has long upheld.

On Wednesday, the justices tackled similar and even stricter laws that bar "political" apparel inside polling places.

The court did not indicate which way it was leaning in questioning Wednesday. Lawyers on both sides of the arguments were pressed hard.

Justice Anthony Kennedy, perhaps the court's most vociferous advocate for free speech, repeatedly noted the necessity for decorum and solemnity in the voting place. Where do we draw the line as to what is permissible? Kennedy asked.

J. David Breemer, the attorney representing Andrew Cilek and the Minnesota Voters Alliance, said he didn't know. The problem with the Minnesota statute, Breemer argued, is it seeks to silence so much speech.

The statute in question says the following:

Cilek wore a Tea Party T-shirt and a "Please I.D. Me" button to vote. He was asked to cover up the tee-shirt and take off the button. After leaving the polling place twice without voting, he came back with his lawyer and was allowed to vote. But his name and address were taken down, because the law provides for up to a $300 fine for violating the ban on political apparel. The fine, though, has never been levied and was not in this case, either, according to the state.

But Cilek and the Minnesota Voters Alliance sued, claiming his constitutional free speech rights had been violated.

"I think the fundamental principle is that I had a right to wear that T-shirt," Cilek maintains.

The Supreme Court wasn't so sure.

Chief Justice John Roberts, for example, like Kennedy, spoke of the necessity for decorum at polling places and warned of a concern about coordination, where a group of people decide to wear the same buttons or shirts, the result being "subtle psychological pressure" on other voters.

Maybe after a sharp, bitter campaign, people should be able to vote "in peace and quiet without being bombarded" by all the "Sturm und Drang" of the election, Roberts said.

But the Chief Justice also seemed to suggest that the state's statute was too broad, when confronting arguments from Daniel Rogan, who was defending the statute for the state.

Rogan argued that just as the Supreme Court itself bans demonstrators, banners, and signs on the plaza in front of the court, relegating such speech to the public sidewalk, states can limit speech at polling places.

Justice Ruth Bader Ginsburg questioned how far this principle should go. Would a "Me Too" or ACLU pin be banned at Minnesota's polling places? Justice Elena Kagan asked about "Make America Great Again" or "Resist."

Rogan said the limitation is on anything pertaining to electoral choices at the polling place. For example, if gay rights is somehow on the ballot, then someone wouldn't be allowed to wear a rainbow flag. If gun restrictions were, then someone couldn't wear an NRA button.

Justice Samuel Alito, who seemed the most overtly hostile toward the law, went through a litany of hypotheticals on everything from "Parkland Strong" (yes, said Rogan, that would be allowed) to an NRA T-shirt (no, Rogan said).

What about T-shirts spelling out the First or Second Amendments, "All Lives Matter" or "I miss Bill"? Alito wanted to know.

"It's an invitation for arbitrary enforcement," Alito said, "and enforcement that's not even-handed."

An exasperated Justice Stephen Breyer pointed out that there are restrictions on speech in many places — hospitals, schools, courtrooms. So, he said, if we are trying to have a place "where a person has reflective thought for a moment after the hurly-burly of the campaign, this problem will inevitably arise." Alito still seemed unconvinced.

Rogan said that wherever a line is drawn, at the margins, there are always going to be difficult choices. And if those choices are made incorrectly, they can be challenged as applied.

Kennedy wondered about that line and whether the process of asking people to cover up or remove buttons or apparel is itself "more disruptive" than letting people wear what they want.

Rogan argued that the process has to be perceived to have integrity and that if someone wearing a "Make America Great Again" T-shirt is asked more questions about their registration than someone wearing an "I love Hillary" T-shirt, there could be the perception of poll workers playing politics.

A history of intimidation

Until the early 1900s, election days looked nothing like they do now. There were no quiet lines of people waiting to vote in curtained-off booths. Instead, election days were raucous, confusing, even violent affairs.

Voters then, as now, often were split into battling ethnic and ideological tribes, except that back then, the battles outside and inside polling places were often physical — coats were torn from people's backs, ballots snatched from their hands, voters were threatened, and in factory towns, managers often stood at the polling place door to make sure that employees voted the "right way."

In the late 1800s, states began enacting laws to protect voters from harassment and intimidation. Soon, every state had laws that banned electioneering outside polling places, and eventually, most states adopted even stricter laws inside polling places. Among the strictest is a Minnesota law that bars voters from wearing apparel or buttons that bear a "political" message.

Backstory of this case

Under enforcement guidelines issued for Election Day, poll watchers were told to ask voters to either cover up or remove any item of clothing, badge or button that supported or opposed a candidate, ballot question or recognized political party or group, including those like the Tea Party or MoveOn.org.

Also banned was any item designed to influence voting, including specifically "Please I.D. Me" buttons. The buttons were distributed by, among others, the Minnesota Voters Alliance, which acknowledged that by wearing the buttons and flashing their identification, they were creating the false impression that Minnesota law requires a photo ID in order to vote.

"I went to vote in November of 2010," recalls Cilek, executive director of the Minnesota Voters Alliance. "I was wearing a T-shirt. ... It said 'Tea Party Patriots, Don't Tread on Me.' "

According to affidavits in the case, he was also wearing a "Please I.D. Me" button.

"I simply asked for a ballot, and they refused me twice," he said. "The only explanation they gave me is that the shirt was political."

His lawyer, Wen Fa, argues the Minnesota law unconstitutionally sweeps too much speech into a ban on political apparel inside polling places.

Can Your Clothes Keep You From Voting On Election Day?

Can Your Clothes Keep You From Voting On Election Day?

"In addition to just banning campaign-related speech like, 'Vote for Bush' or 'Vote for Gore,' it bans passive political speech," Fa said. "For example, the government conceded that this ban would also apply to people wearing shirts featuring the logo of the AFL-CIO or the Chamber of Commerce."

Yes, says Rogan, who is defending the apparel ban; he did make that concession, but only if the ballot included a measure that directly involved either the union or the chamber.

A calm environment for voters

There is nothing nefarious about the apparel ban, says Virginia Gelms, the elections manager for Hennepin County. Most people who are wearing a T-shirt or button are simply unaware of the rule, and when asked to cover it up with a jacket or take it off, they quickly comply and the matter is resolved "without incident."

Cilek's refusal to do that, she said, was viewed as "confusing" to voters and "disruptive" and designed to "draw election judges into a dispute."

Election officials worried, for instance, that people in line would leave without voting if they thought, erroneously, that they needed a photo ID to vote and hadn't brought one with them.

Indeed, she said one head election judge told her that he was not sure he would serve again if the ban is struck down because he wouldn't be able to protect the judges he supervises from getting drawn into political battles. After all, Gelms contends, that is not what polling places are for.

"All those restrictions are there to help election judges manage a calm and efficient process," she said, "so that everybody who has the right to vote can get in, exercise that right, and move on with their day."

In the Supreme Court on Wednesday, Rogan, defending the ban, told the justices that a polling place, like a courtroom or a military base, is not a public forum where people are free to speak their minds.

"The interior of a polling place is designed for one purpose," Rogan has said. "It's designed to provide citizens a place to make their electoral choices and to ensure that those choices are accurately and reliably tallied by elections officials."

Indeed, the attorney for Cilek would not rule that out.

In the audio of this story, as well as in a previous version of the Web story, we say 50 states had laws on intimidation and harassment at the polls around the turn of the 20th century. There were not 50 states at the time. In addition, a previous version of this story misspelled Andrew Cilek's last name as Celik. Also, in the audio, as in a previous Web version, Virginia Gelms is incorrectly identified as the elections manager for Minneapolis; Gelms is the elections manager for Hennepin County.