Accessibility links
A Brief History Of The AR-15 The semi-automatic rifle has been in wide circulation for more than a half-century. In recent years, gunmen have used AR-15-style weapons to carry out many of the country's worst mass shootings. 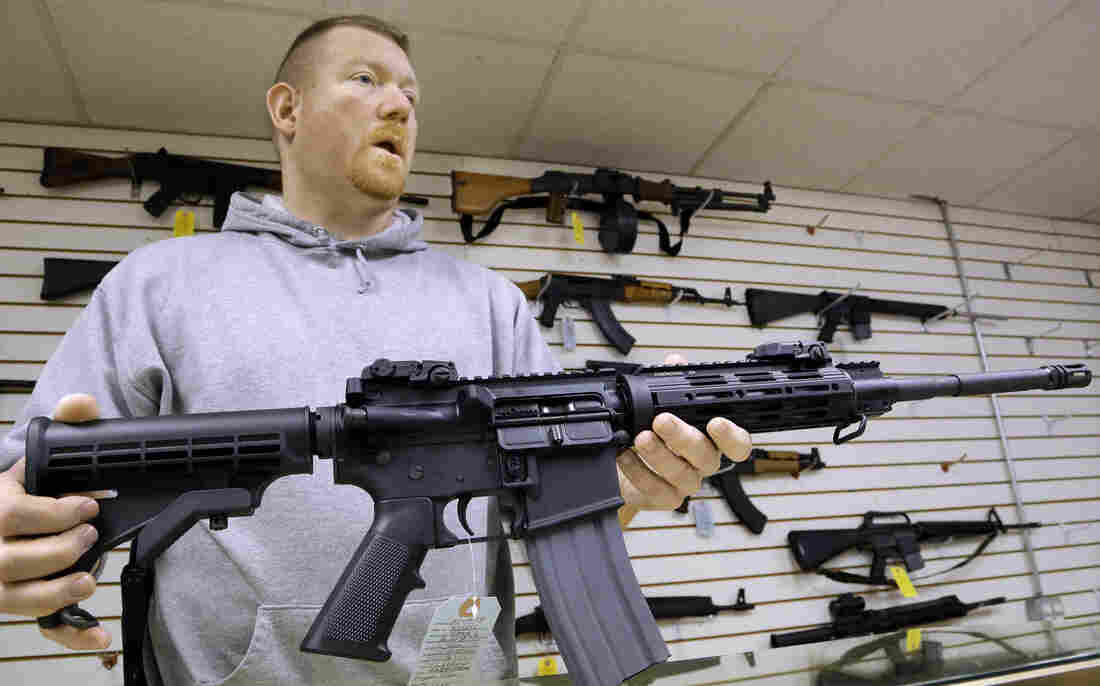 John Jackson, co-owner of Capitol City Arms Supply, with an AR-15 rifle for sale at his store in Springfield, Ill., in 2013. The semi-automatic rifle has been sold to the public since the 1960s and the NRA estimates that around 8 million AR-15s and related models are in circulation. Seth Perlman/AP hide caption 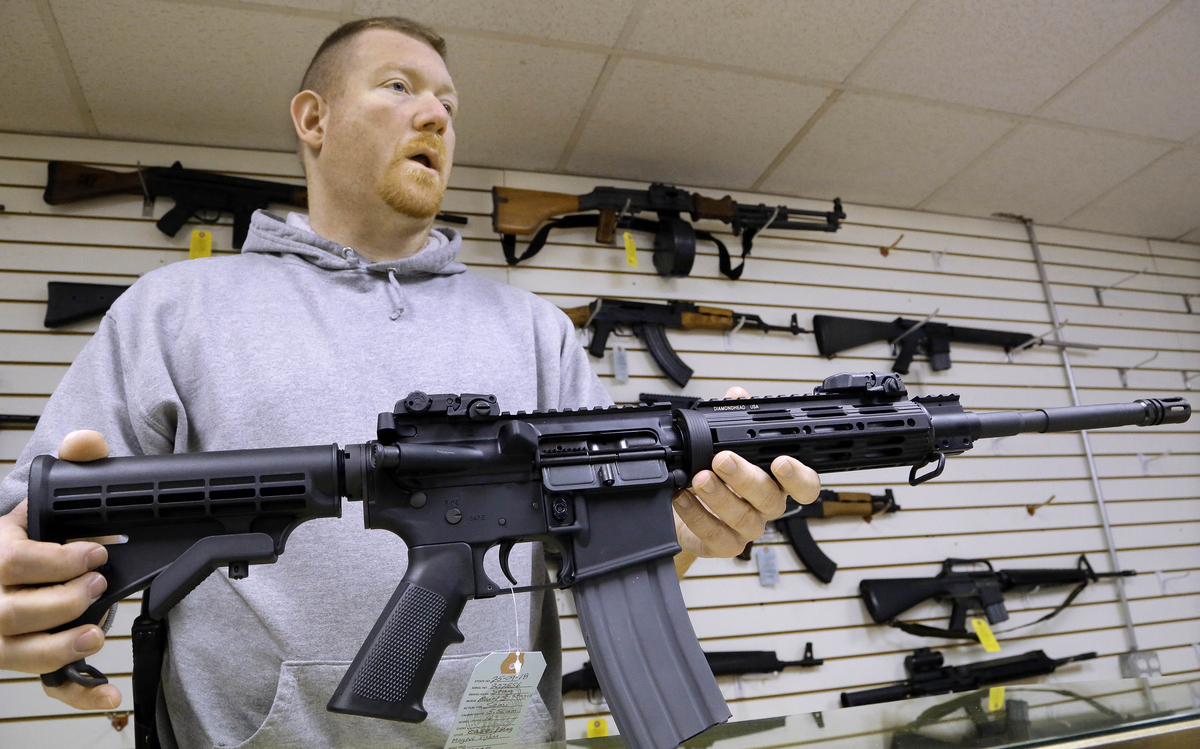 John Jackson, co-owner of Capitol City Arms Supply, with an AR-15 rifle for sale at his store in Springfield, Ill., in 2013. The semi-automatic rifle has been sold to the public since the 1960s and the NRA estimates that around 8 million AR-15s and related models are in circulation.

What weapon did the gunman use in the recent shooting at Marjory Stoneman Douglas High School in Florida?

For more than a half-century, the AR-15 has been popular among gun owners, widely available in gun stores and, for many years, even appeared in the Sears catalog.

Yet over the past decade, the AR-15 and its offshoots have been used in many of the country's worst mass shootings. This has reignited the debate about their widespread availability.

Dick's Sporting Goods announced Wednesday that it would no longer sell these assault-style weapons.

"I'm a gun owner myself," Ed Stack, the company's chief executive officer, told ABC's Good Morning America. But, he added, "We've just decided that based on what's happened and with these guns, we don't want to be part of this story."

Here's a quick history lesson on why AR-15 has become the umbrella term for a range of semi-automatic rifles made by a host of gun makers.

"AR" comes from the name of the gun's original manufacturer, ArmaLite, Inc. The letters stand for ArmaLite Rifle — and not for "assault rifle" or "automatic rifle."

ArmaLite first developed the AR-15 in the late 1950s as a military rifle, but had limited success in selling it. In 1959 the company sold the design to Colt.

In 1963, the U.S. military selected Colt to manufacture the automatic rifle that soon became standard issue for U.S. troops in the Vietnam War. It was known as the M-16.

Armed with that success, Colt ramped up production of a semiautomatic version of the M-16 that it sold to law enforcement and the public, marketed as the AR-15.

When Colt's patents for the AR-15 expired in the 1970s, other manufacturers began making similar models.

Those gun makers gave the weapons their own names, yet the popularity of the AR-15 turned it into a generic term for all types of AR-15-style rifles.

These weapons can go for less than $1,000, though they can be customized and cost in the thousands of dollars.

The National Rifle Association estimates there are some eight million AR-15s and its variations in circulation, and says they are so popular that the "AR" should stand for "America's Rifle."

Which brings us back to our original question about the weapon used in Florida, which is commonly described as an AR-15.

Police say the gunman actually used a Smith and Wesson M&P15, that manufacturer's version of the AR-15.

AR-15-style rifles were around for more than 40 years before one was used in a mass killing, at an apartment in Crandon, Wis., in 2007. The shooter killed six people and then took his own life.

However, gunmen (and at least one gunwoman) have used AR-15-style weapons in most all of the deadliest shootings in this decade.

- The shooting at Sandy Hook Elementary School in Connecticut that took 27 lives in 2012. 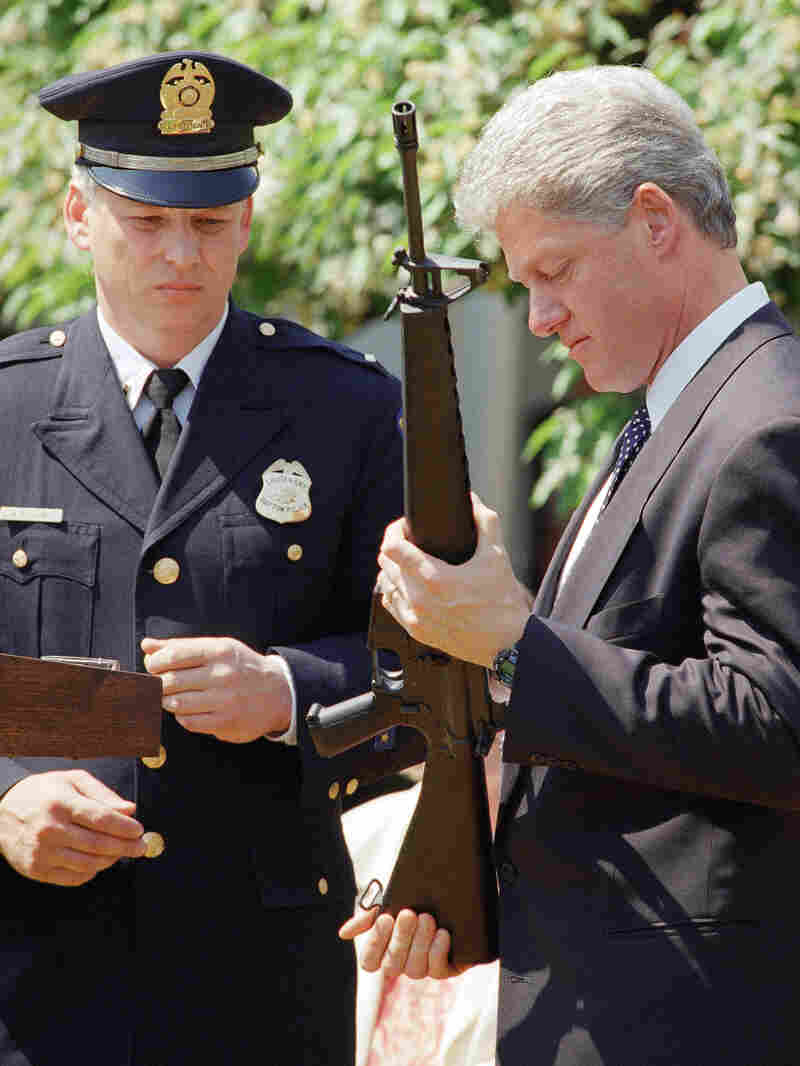 President Bill Clinton holds an AR-15 rifle during a White House ceremony in 1994 where he launched efforts to ban assault-style weapons. The ban was in place from 1994 to 2004. Dayton, Ohio Police Lt. Randy Bean, whose fellow officer was gunned down with an AR-15 in 1991, looks on. Dennis Cook/AP hide caption 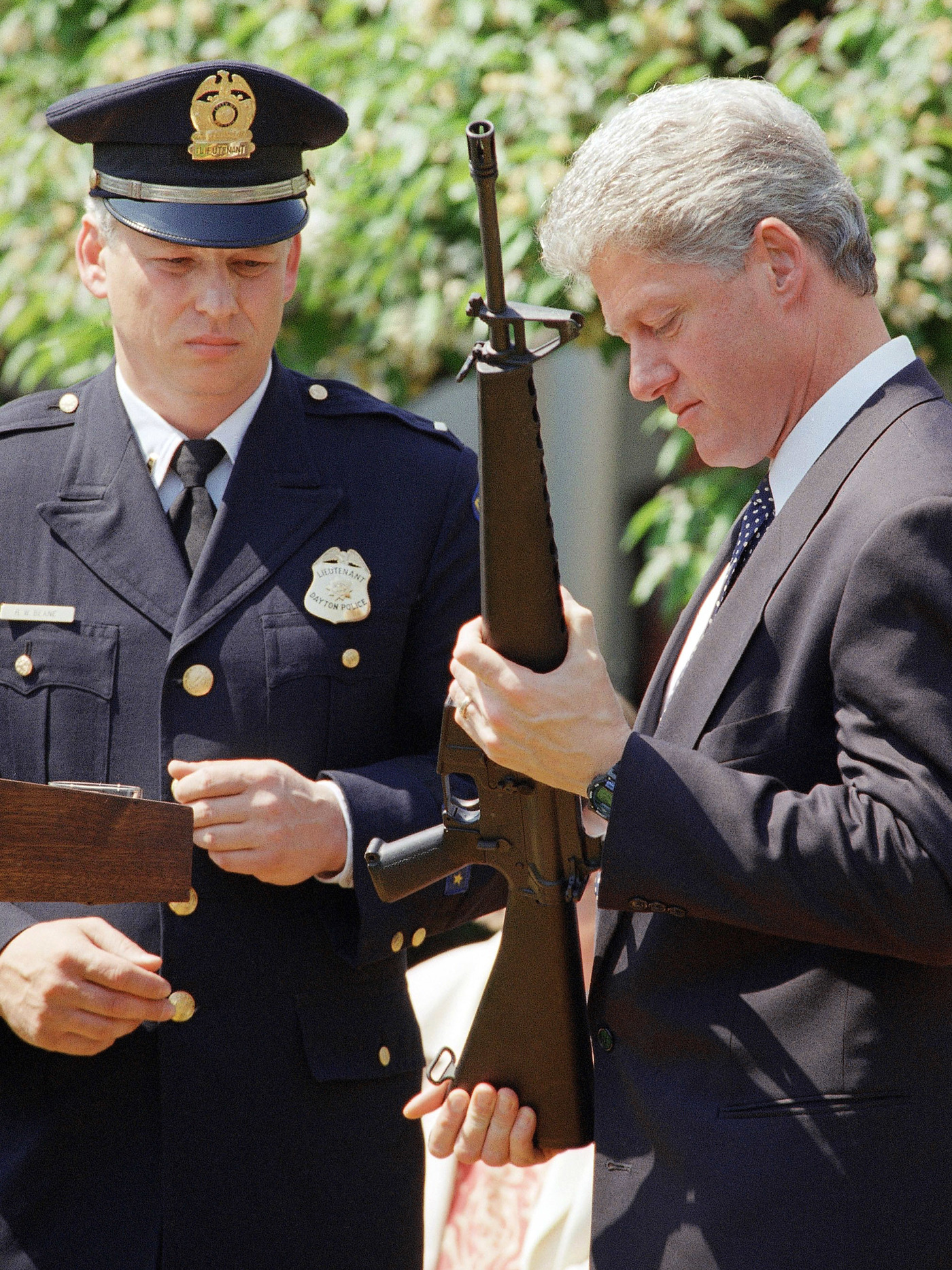 President Bill Clinton holds an AR-15 rifle during a White House ceremony in 1994 where he launched efforts to ban assault-style weapons. The ban was in place from 1994 to 2004. Dayton, Ohio Police Lt. Randy Bean, whose fellow officer was gunned down with an AR-15 in 1991, looks on.

AR-15-style semiautomatic weapons are civilian versions of military weapons. So what's the difference?

Gun control advocates say the difference is minimal, arguing the AR-15, like its military version, is designed to kill people quickly and in large numbers - hence the term assault-style rifle. They say it has no valid recreational use, and civilians should not be allowed to own them.

The gun industry, gun owners and their supporters say AR-15s are used for hunting, target practice and shooting competitions and should remain legal.

Because AR-15-style weapons are semiautomatic, the shooter must pull the trigger to fire each shot from a magazine that often holds 30 rounds.

In contrast, a shooter with a fully automatic assault rifle can pull and hold the trigger and the weapon will keep firing until the ammunition supply is exhausted.

Fully automatic weapons have been tightly restricted in the U.S. since the 1934 National Firearms Act, which was directed against machine guns at the time.

However, a bump stock — a legal device in many places — can be added to a semiautomatic weapon to approximate an automatic rifle.

The Las Vegas shooter had a bump stock, which brought the device to national attention, and has led to calls to ban it in the current gun debate.

In 1994, President Bill Clinton signed an assault-weapons ban, which outlawed the AR-15 and other similar semiautomatic rifles.

After the assault-weapons ban expired in 2004, gun makers quickly reintroduced them and sales were brisk.

"One of the things that we have seen in recent years after the assault weapons ban ended in 2004 was this really huge explosion of these boutique kind of rifle companies that are producing these very high-end rifles that are very customizable," said Alain Stephens, who's part of NPR's criminal justice team and a former member of the military.

On several occasions, AR-15 sales have spiked when there's renewed talk about banning them.

Laws vary by state, but in Florida, for example, anyone who is 18 or older with a clean record can purchase an AR-15-style rifle with no waiting period.

Republican lawmakers in the state have proposed several steps that include raising the age to 21 for the purchase of all guns, and imposing a three-day waiting period.

However, the Republicans who control the legislature are not calling for a ban on AR-15s or any other gun, and the steps fall far short of what gun-control advocates want to see.