Accessibility links
A Primer On This Year's Foreign Language Film Oscar Nominees See them, if you can — they're a diverse and fascinating mix of films. But if you can't, and you're pressed to make small talk come Oscar night, we've got you covered. 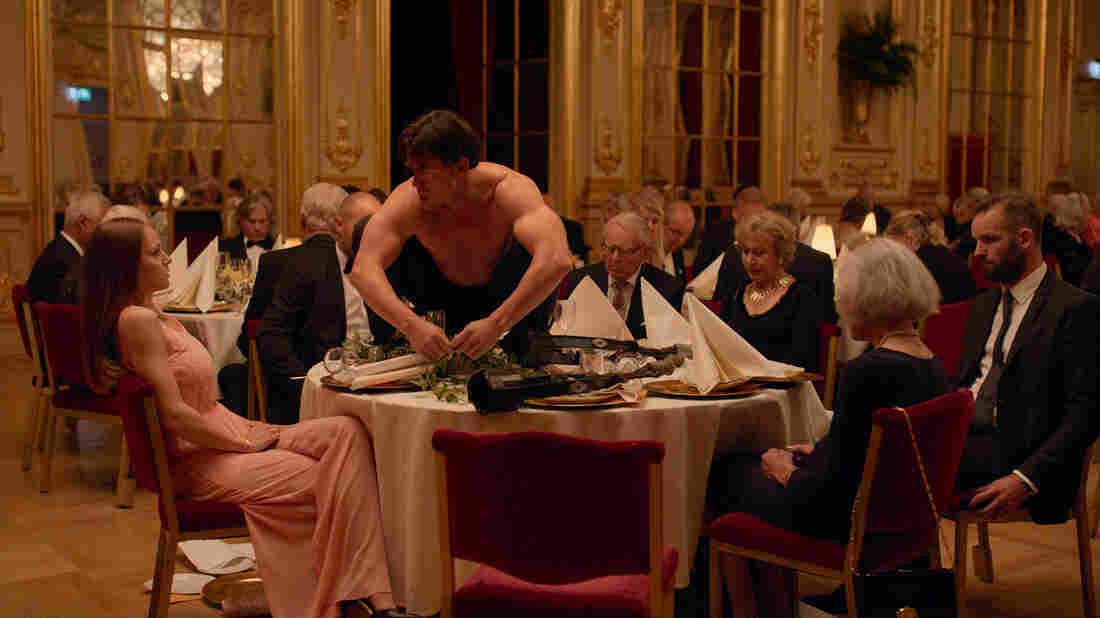 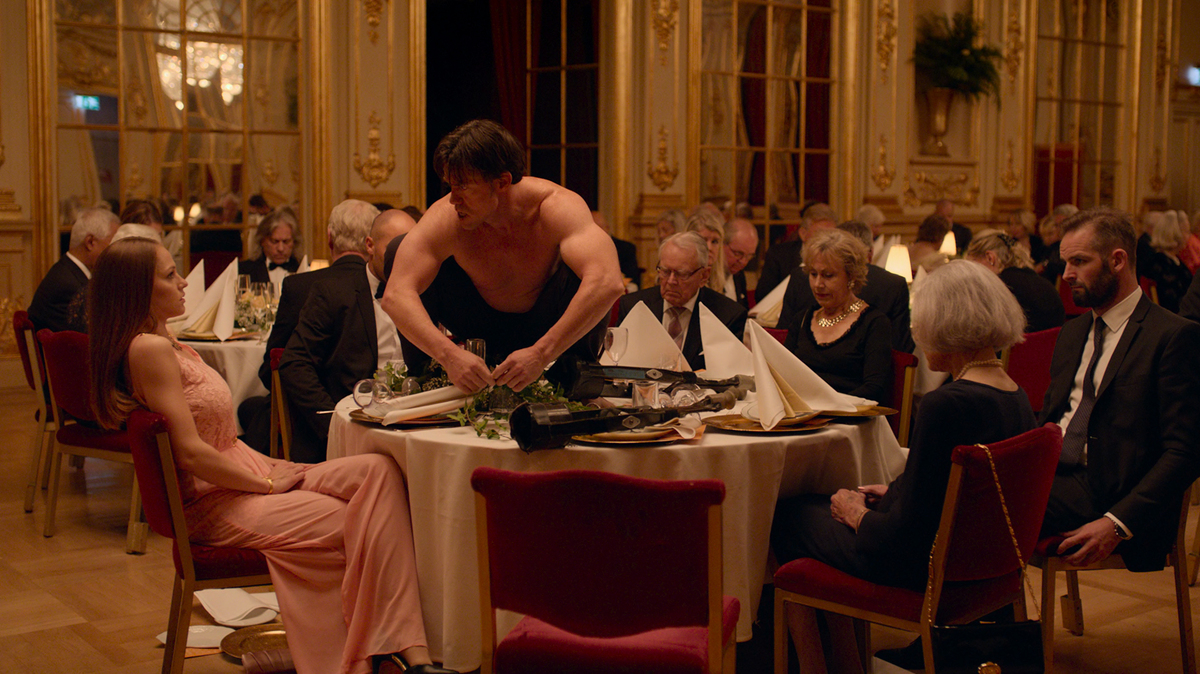 In Sweden's The Square, a performance artist (Terry Notary) goes ape at a fancy museum gala.

First of all — and we shouldn't have to say this, but we'll say it anyway — don't fake it, if you don't have to. If you have the time, and the means, try to see as many of this year's Oscar nominees for best foreign-language film as you can.

They're a diverse mix of styles and tones and subjects. A couple are kind of funny, the rest are very, very not. One of them leans hard into a darkly intriguing absurdism, the rest are each, in their way, uncompromisingly grounded.

And you've just gotten an Outlook reminder that Trish's Oscar party is only days away. It's taken a lot of work, but this year you're up on all of the best picture and acting noms. You've got thoughts on best director, and animated feature and both adapted and original screenplay. For the first time, you'll be able to hold your own on cinematography — you've even developed a fresh hot take to bust out over Trish's nasty, mealy bean dip (Roger Deakins vs. Rachel Morrison = The Erica Kane vs. The Current Moment). You've prepped a tight two minutes on how they nominated the wrong song from Call Me By Your Name, and while every year you forget the difference between sound editing and sound mixing, you'll look it up on the cab over and be ready.

Except of course you don't.

This is Trish, remember. She's the kind of person who sits silently, index fingers steepled at her chin, nodding sagely through all of the credits of Dirty Grandpa. ("Filmed in Georgia, I see," she whispers to you solemnly. "The tax incentives, of course.") Plus, all of those deeply annoying friends she goes to bar trivia with will be there, too. They know things, those beardy bespectacled jamokes, many things -- too damn many things — and they like to lord it over everyone. Like that one friend of hers, Geoff, remember him? The one who exultantly shamed you that time you missed Monster's Ball in charades?

All your hard work won't be enough. They will all have seen the foreign-language film nominees and will come armed with fervently held opinions. And they can smell weakness, these ghastly, ghastly people, and they will grill you.

Don't worry, we've got your back.

Where It's From: Sweden

1. Well, "cringeworthy and darkly funny," for one. Duh.

2. "I mean, of course when it won the Palme D'or at Cannes, you had to figure it would be the front-runner."

3. "That first scene between Claes Bang's curator and Elizabeth Moss' reporter is so wonderfully, realistically awkward."

4. "Dominic West brings real conviction to his brief screentime as an insufferable artist/tool."

4. (Caution: Use of the following phrase should be reserved for later in the evening, once the alcohol has loosened tongues and inhibitions): "Claes Bang can bang, yo."

1. Use of "Claes Bang can bang, yo" too early in the evening.

For Extra Credit: An excerpt from that ape/gala dinner scene is up on YouTube, narrated by the director and screenwriter, Ruben Ostlund. You might want to review it on the way over to the party.

(Not currently steaming; in theaters now) 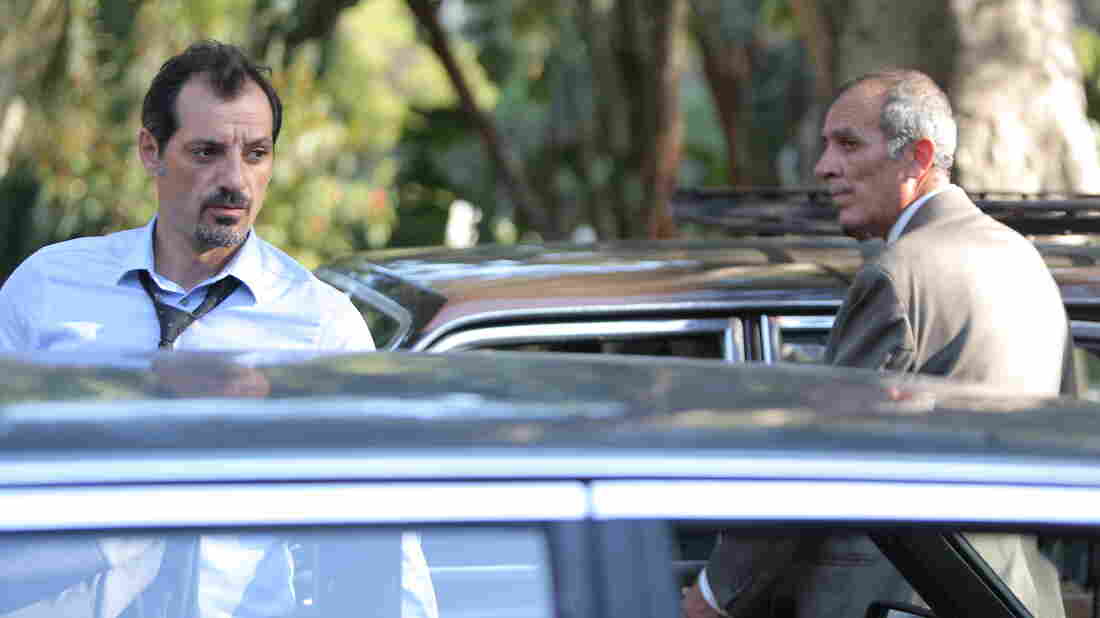 In Lebanon's The Insult, a confrontation between a devout Christian (Adel Karam, L) and a Palestinian refugee (Kamel El Basha, R) escalates beyond what either could predict. Cohen Media Group hide caption 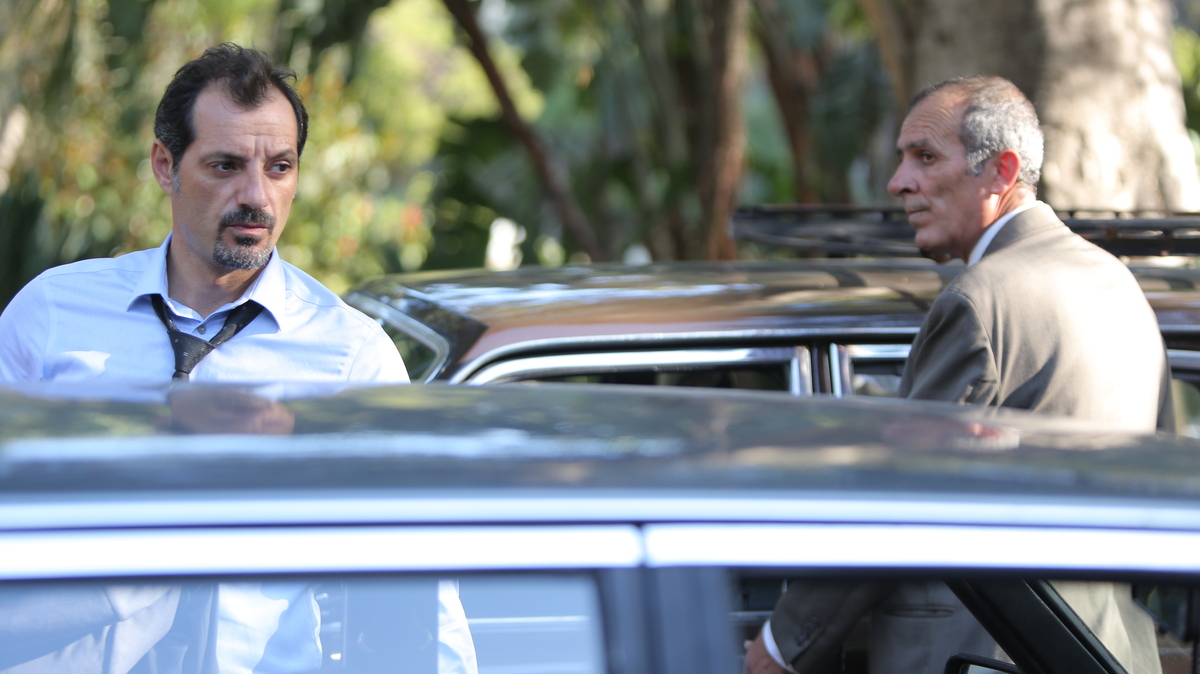 In Lebanon's The Insult, a confrontation between a devout Christian (Adel Karam, L) and a Palestinian refugee (Kamel El Basha, R) escalates beyond what either could predict.

Where It's From: Lebanon

Precis: A Lebanese Christian and a Palestinian refugee get in a dispute about plumbing. Except of course it's not about the plumbing, it's about their deep, mutual collective distrust and hatred. The dispute escalates from physical, to legal, to cultural in a way that feels inevitable, even though the film takes pains to show that it isn't. Again and again, both men are offered chances to de-escalate, to walk away. Again and again, they refuse to do so.

1. "Have you seen (director Ziad Doueiri's previous film) The Attack? Oh you must, Trish, you simply must."

2. "What did you think of the reveal about how the two opposing lawyers were connected? That felt a little ... cheesy courtroom hijinks, no? A little ... Franklin and/or Bash?"

3. "Of course, the film's truly about the painful legacy of Lebanon's 15-year civil war." (Take a long sip of your drink, here, and excuse yourself to get a refill so as to avoid any follow-up questions.)

For Extra Credit: Mention to Geoff how controversial the film has proven, with boycotts called in Lebanon and the West Bank. He'll already know that, of course, but you've got to get some points on the board any way you can.

On Body and Soul 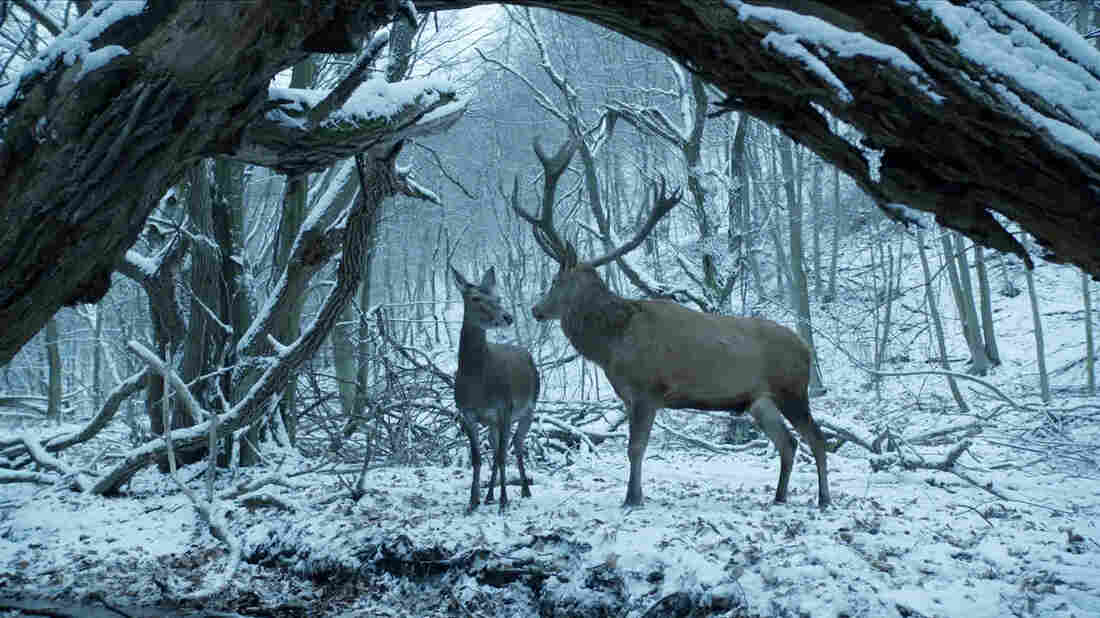 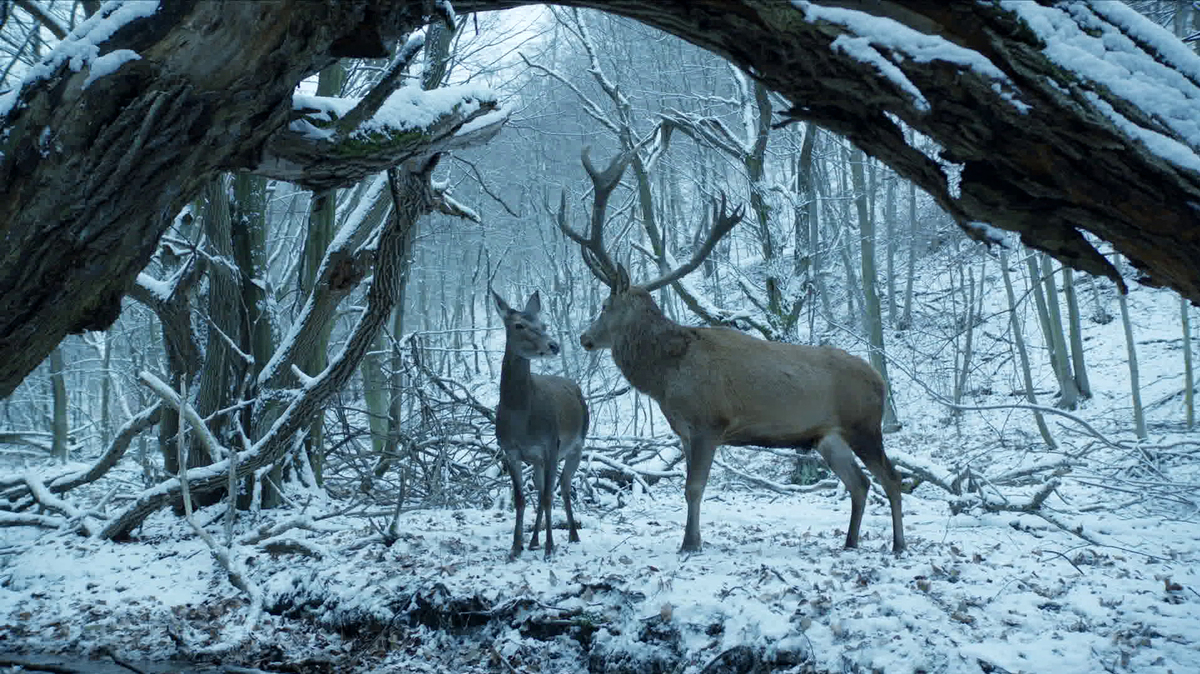 In Hungary's On Body and Soul, two slaughterhouse workers share a dream of deer.

Where It's From: Hungary

Precis: Two workers in a Hungarian slaughterhouse fall in a kind of abstruse love when they discover that they've been sharing the same dreams: He is a buck, she a doe, and nightly they nuzzle one another in a gorgeously stark and snowy forest. That's the soul part. The body part is a lot more — literally — visceral: Back at the slaughterhouse, cows get graphically rendered into slabs of meat, and a boorish male worker acts boorishly. A crime occurs, involving a bovine aphrodisiac.

1. "It recalls early Jane Campion — lots of ideas that have a tough time connecting, and a tone you'd call whimsical or fabulist if it didn't seem so motivated by a deep misanthropy."

2. "The dreams were exquisite. The slaughterhouse was really slaughtery."

1. "Oh man this movie made me want to shove a big ol' pile of steak tartare into my face-hole."

For Extra Credit: Maybe mention that nothing about the bovine aphrodisiac storyline makes any sense — not the crime itself, not the investigation of the crime, nor its sort-of-resolution — and that the contrast between the film's dream life and real life would land more effectively if the real-life stuff didn't also evince such a feathery, lightly absurdist tone. (If you do decide to mention this, be prepared for Geoff or Trish or whomever to roll their eyes and tell you that you clearly didn't get the film, as it's engaged in a deeper examination of the human condition than you seem prepared to process.) (Whether or not you respond to this with a rude gesture and an uncouth comment about processed-meat is entirely up to you.)

(Not currently streaming; in theaters now) 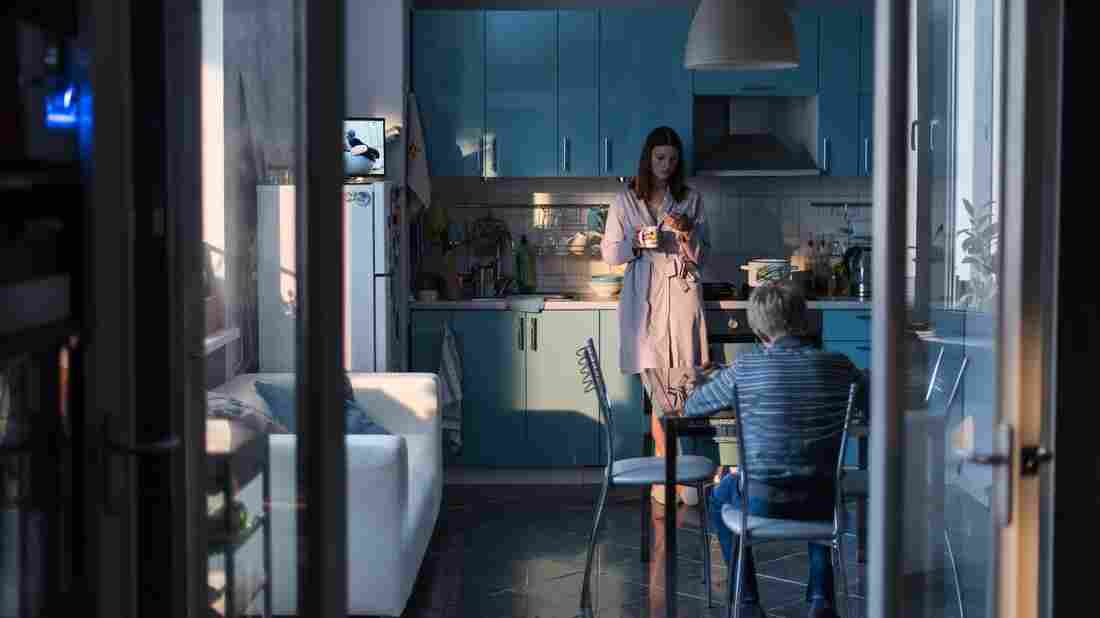 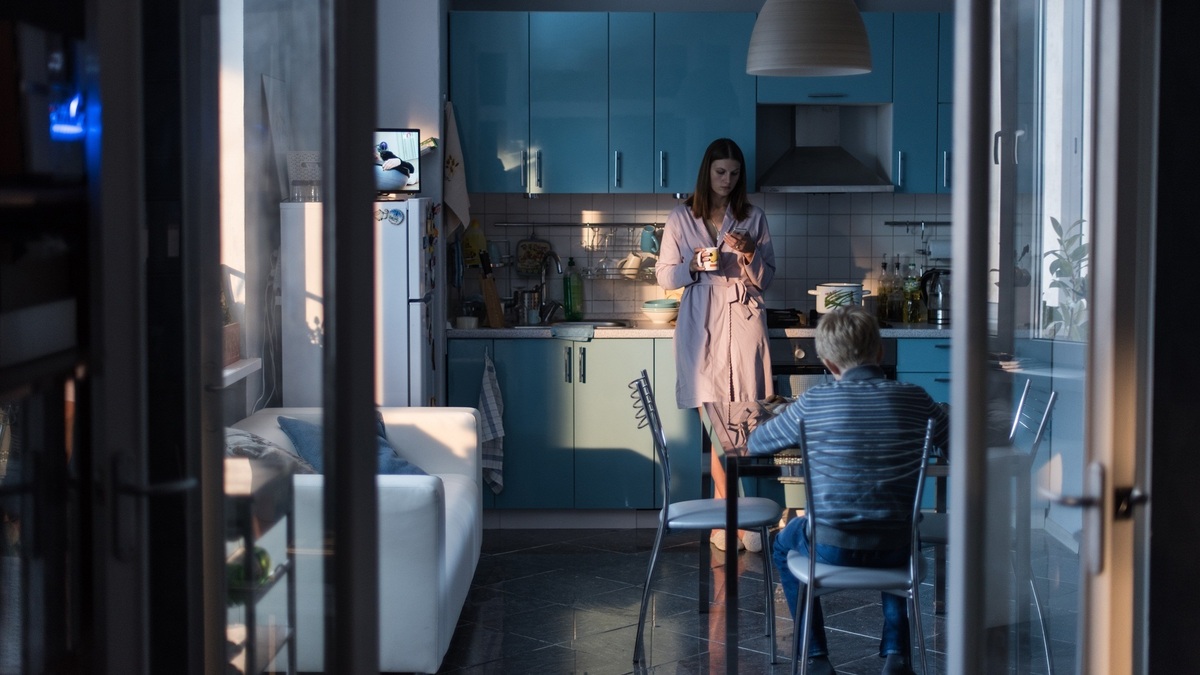 Where It's From: Russia

Precis: Hooooo boy. This one's the bleakest of the lot, which is saying something. A divorcing middle-class Russian couple loathe each other so thoroughly that both ignore their 11-year-old son. It takes them a while to notice that he's gone missing, and their search for him becomes an extended, not particularly subtle metaphor about life in contemporary Russia. The police cannot help. Volunteers attempt to help them navigate the system. The stress of a missing son doesn't bring them together, as you might expect. Instead, their mutual hatred, and complete lack of empathy (which: note the title) drive them even further apart. All this, amid lots of long, silent shots of decaying infrastructure (get it?).

1. "I've read reviews that fail to acknowledge how much the film's grappling with life under Putin. Can you even imagine?"

1. "That closing image — the woman on a treadmill, in a tracksuit emblazoned with the word 'Russia,' running and running and running, without going anywhere? Could you make heads or tails of that, Geoff? Because I totally didn't get what that was about."

2. "That dance number was pretty spectacular." (There is no dance number.) (The film is one long, extended opposite-of-a-dance-number.) (It is in fact the heat-death of dancing, and music, and light, and fun.) (It is guilty feet; it got no rhythm.)

For Extra Credit: Mention that the kid's father suffers in noble, stoic silence while the kid's wife — and most of the film's women — are depicted as cartoonishly whining, selfish, repellent creatures. And that that can't help but seem ... telling. 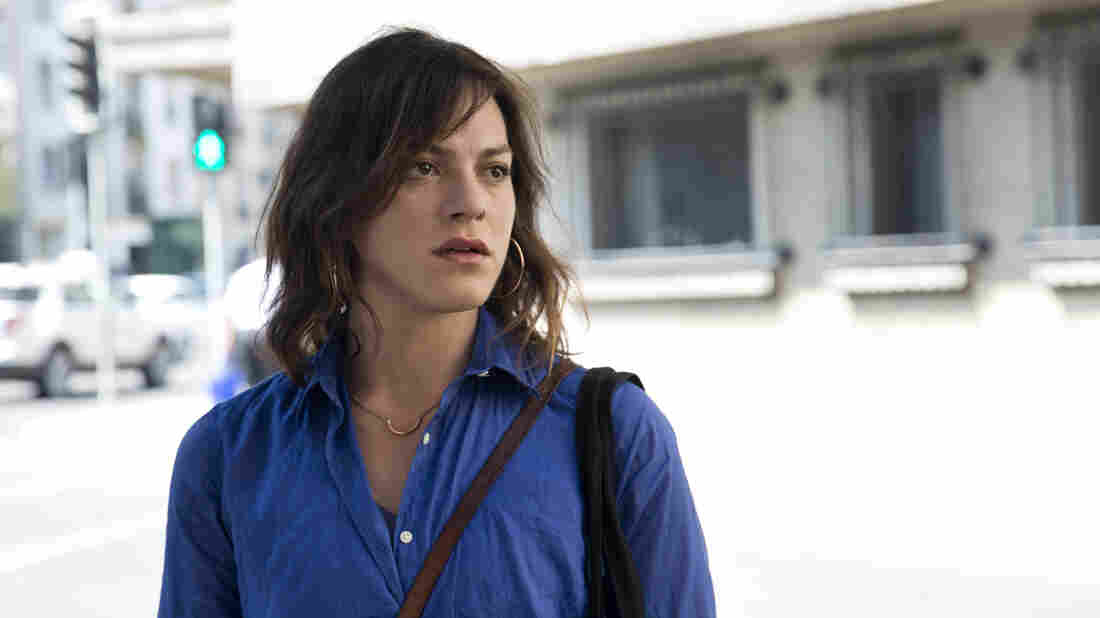 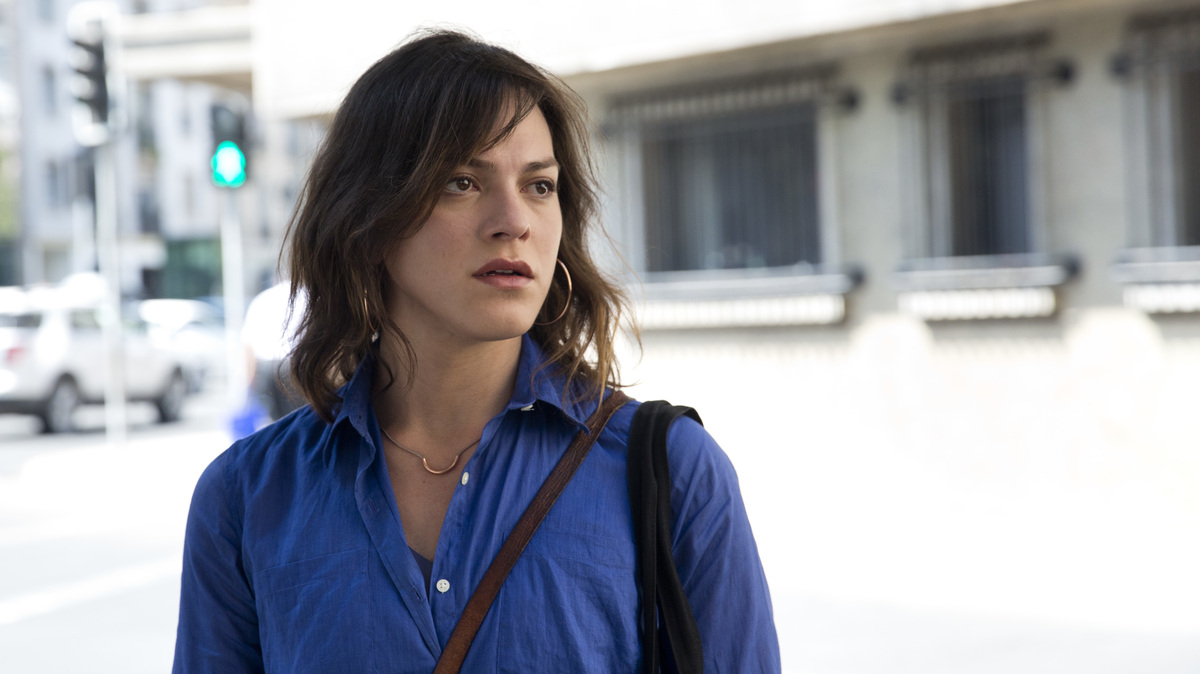 In Chile's A Fantastic Woman, Marina (Daniela Vega) deals with grief, petty insults and physical assault in the wake of her boyfriend's death.

Where It's From: Chile

Precis: Marina, a trans nightclub singer, falls in love with a divorced middle-aged man, who dies suddenly. She spends the days after his death facing up under the verbal insults and physical assaults dealt her by the man's family, the police, and her co-workers. She remains strong, determined and unbowed throughout, and ultimately achieves a kind of victory that doesn't feel small, or Pyrrhic, but very real.

'A Fantastic Woman' Is As Strong And Complicated As Its Star

1. "Star Daniela Vega started off as a consultant on the production, and the part of Marina was clearly shaped around her — that's her voice on the soundtrack, you know."

2. "The film keeps making you think it's about to turn into some broad, didactic screed — but instead it keeps things deeply intimate and personal, loading up detail after detail to place us inside Daniela's head, and her heart."

1. "[Casually transphobic statement]." Just as a general rule, and a matter of principle.

2. "I didn't care for the dance number." (Wrong! It was pretty spectacular.)

For Extra Credit: Ask Trish if she can name either of the classical pieces we see Daniela sing in the movie. (Don't worry, she won't be able to. Trish considers herself a cineaste -- that's a what she calls herself, a cineaste, she's just really a terrible human being — and only listens to movie soundtracks. (To this day, she refers to Strauss' "Also Sprach Zarathustra" as "that spaceship song.")

The two pieces are Giacomelli's "Sposa Son Disprezzata" and Handel's "Omba Mai Fu." Maybe load 'em up on your phone, just have them ready? For the mic drop? Don't worry about looking like you're showing off; remember whom you're dealing with here. They must be shamed. Humiliated.

Do it. Embrace your triumph. You have prevailed! Rub Geoff's smug face in Trish's chalky, chalky bean dip!

An earlier version of this article mentioned protests in West Beirut. Beirut is no longer considered a divided city, and the protests are in fact more widespread across Lebanon.