Accessibility links
Siblings On A Strange Journey In 'Monster Portraits' Sofia Samatar teams up with her brother Del, a tattoo artist, to create a new take on the fantastic bestiary. The result is a prose poem with jolts of autobiography, spiced with intricate drawings.

Siblings On A Strange Journey In 'Monster Portraits'

Siblings On A Strange Journey In 'Monster Portraits' 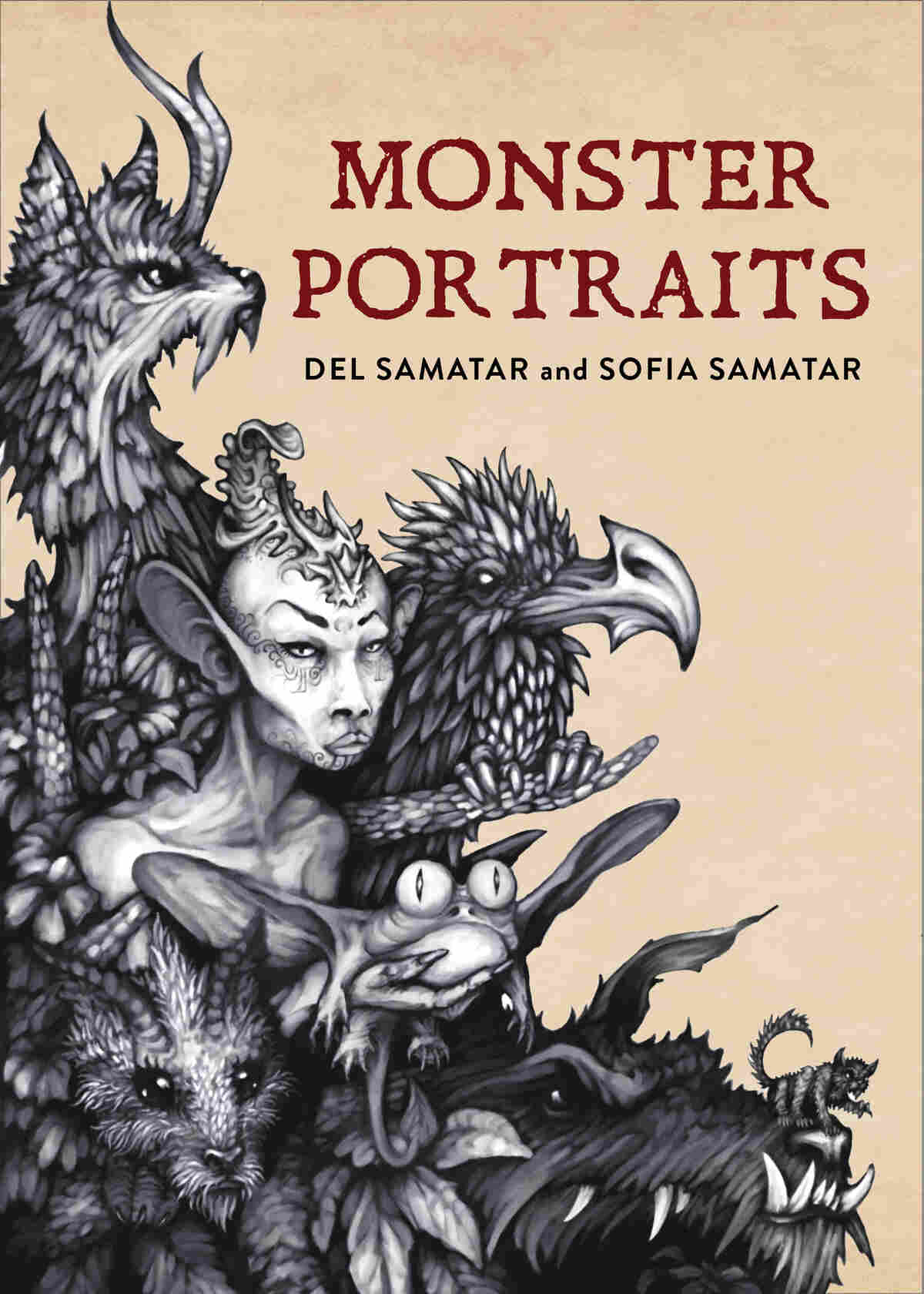 by Del Samatar and Sofia Samatar

One day I called my brother on the phone. He didn't pick up, so I left a message saying we should tell our lives through monsters, as the ancient Egyptians told the year through the myth of Osiris. A mirror becomes architecture when you pass to the other side: this is what we had understood as children. I wanted to find that depth again, to plumb a vertical field. "Our world is another," I managed to say before my brother's phone cut me off. Late that night he texted me back: "Sounds dope." I was encouraged by this, as dope suggests both a hallucinatory, pleasurable experience and crucial information, as in give me the straight dope. It didn't occur to me then that it also means a fool.

The fantastic bestiary is a time-honored speculative tradition. But some of the earliest ones didn't even know they were speculative; early bestiaries routinely included dragons and unicorns alongside panthers and hyenas, creating pockets of the uncanny amid history. For those who have never seen the beasts they draw, it's only possible to guess, and there's always some element of dread in the unknown. Animals we've never seen are monsters; their portraits are an act of faith.

Sofia Samatar knows all this, and that knowledge is on display in Monster Portraits. Samatar, an academic as well as a writer, is fascinated by the function of text as artifact. (There's a sizable list of references at the end of the book, in case you can't stop thinking about some of the phrases combined in this new, resonant context.) This time around, she's concerned with the identity and impact of everything from monsters to the fourth wall. She, the writer, asks her brother to collaborate on a book about monsters. She, the character, asks her brother to accompany her on a strange journey that builds upon itself so carefully you won't notice the hits coming until it's too late.

'Tender' Stories Are A Feast Of Ideas

With Beauty And Wonder, 'The Winged Histories' Soars

A prose poem with jolts of autobiography, Monster Portraits is spare and meant to be taken very slowly. Even the structure asks the reader to consider how things are assembled — timelines, memoirs, myths. Vignettes read like the monsters of fairy tales, or monsters the way all animals are monsters, known to themselves in a way we'll never know them. Some show us ourselves, the readers, looking at each other and trying to define something lesser. A few reflect us for reasons close to home. (From an interview: "Her heart bore a pair of claws that were useful for nothing, she told me, but scratching at itself.")

Of course, this is a book about siblings, and about trying to capture something ephemeral. Enter the bestiary, drawn by Samatar's brother Del Samatar, clearly loving his work. Some monsters have elements we often imagine for a threatening Other (eyes, horns, the occasional vagina dentata); others have that illuminated-manuscript sense of nature overflowing. They're an easter egg hunt of influences, with winks to everything from depictions of Tibetan deities to Star Wars concept art. And there's a sense, in the collective details, of the "natural curiosities" engravings of the 18th century, when naturalists catalogued a world so varied as to occasionally seem alien.

But it's interesting, given the conceit of Monster Portraits, that the portraits themselves seem at odds with some of what Samatar is trying to do. So many of these encounters are internal, concerned about how slippery a word like "monster" is, and the ways in which something can be frightening. Often, you get the sense the whole monster can't be physically rendered because so much of what registers as Other is beyond appearance; the unseen is always more frightening than the seen. It can seem, at times, like the words would do as well without the portraits. But this, too, feels almost deliberate — the siblings within the story trying to recreate something you suspect can never be reconciled. ("The monster evokes, in equal measure, both compassion and its opposite," the narrator writes, when visiting a doctor, thinking of the past and Frankenstein's monster. She drinks something terrible. "I understood that I would have to drink it all.")

Monster Portraits isn't very long. Chapbook length, maybe; the size of something handed out to tempt you into something larger. But Samatar works as much in the spaces between things as within the things. This slender book plumbs a vertical field. You'll spend some time here.