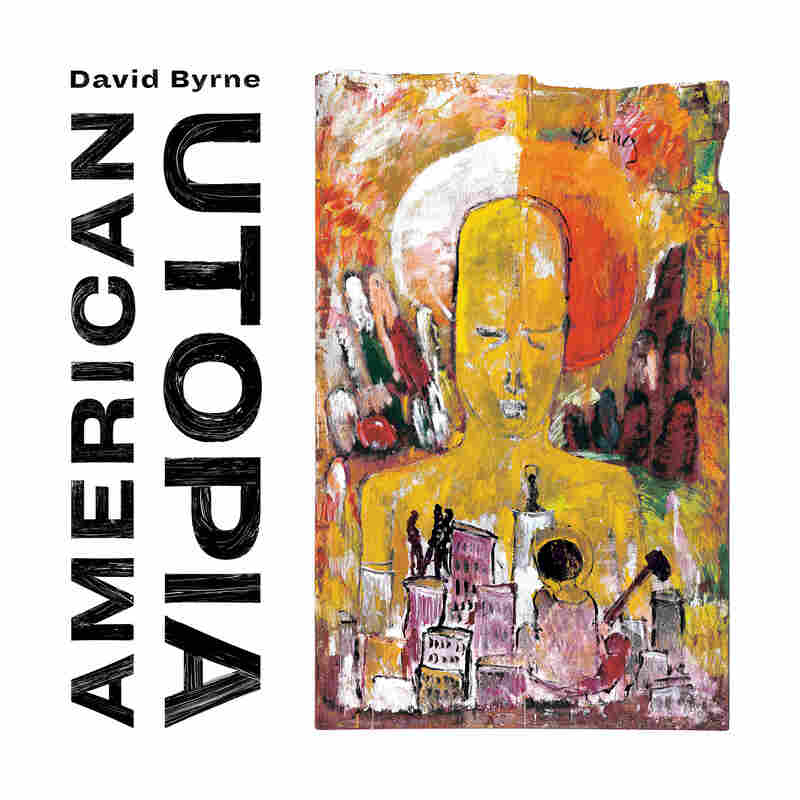 If a brain in a jar could observe the world, make sense of it and churn it into a batch of songs, it would make the album American Utopia. This brilliantly analytical album is from David Byrne — an American treasure, an artistic thinker and creator responsible, in part, for the some of the most memorable and distinctive music of the past 40 years. His albums and myriad other projects have been made possible by a lifetime of collaborators that include Chris Frantz, Tina Weymouth and Jerry Harrison of the band Talking Heads, his now four-decade friendship with producer Brian Eno and, more recently, with the artists St. Vincent and Fatboy Slim. American Utopia is billed as David Byrne's first solo album since 2004. But solo in his case doesn't mean alone; it means "Everybody's Coming to My House," the title of the album's penultimate track and an apt description of the record's cast of characters.

American Utopia's origins began with tracks from Brian Eno and it grew and morphed from there, bringing in other collaborators and musicians, including producer Rodaidh McDonald (The xx, King Krule, Adele), producer Patrick Dillett (Nile Rogers, Sufjan Stevens,) drummer Joey Waronker (Atoms for Peace, Beck), Isaiah Barr on sax (Onyx Collective) Thomas Bartlett (aka Doveman) on mellotron, Daniel Lopatin (Oneohtrix Point Never) on keys and electronics, singer and pianist Sampha and Brian Eno on keys, brass, whistling, robot rhythm guitar and more. The list of contributors is actually longer than this. But, suffice it to say, that inspiration for this record came from an awful lot of talent. The music is intense, it's playful and quite memorable.

American Utopia takes vignettes from day-to-day life, magnifies them and lays them out for us to rethink how we see the world. The song "Gasoline And Dirty Sheets" examines the proliferation of advertising, fast food and crazy consumption as seen through the eyes of a refugee. "Bullet" describes a killing from the perspective of bullet passing through a body. Byrne's lyrics are matter-of-fact as he sings, "The bullet went into him / His skin did part in two / Skin that women had touched / The bullet passed on through."

But beyond the potent subjects, there's plenty of funny stuff in these observations. The song "Every Day Is A Miracle" looks at the world not through human eyes but through the eyes of a chicken. "Now the chicken imagines a heaven / Full of roosters and plenty of corn / And God is a very old rooster / And eggs are like Jesus, his son." It also sees this miraculous world from a tongue's perspective and a cockroach's.

American Utopia's closing song is called "Here" and sums up much of what David Byrne's art conveys. It's a song with Daniel Lopatin on drums and keyboards and Byrne on guitar and voice, singing about how the brain processes the world. It's a little neuroscience lesson that ends with this thought and then a question "Here too many sounds for your brain to comprehend / Here the sound gets organized into things that make some sense / Here is something we call elucidation / Is it the truth? Or merely a description?" It's in that closing thought that we're left with something to take into our day to day — and, as scientific as many of these observations are, they are a means toward empathy and understanding. In a world filled with millions of songs about personal problems and love gone right or wrong, I'm thrilled to have a record that opens my eyes and widens my perceptions and helps me stop and make some sense of this inexplicable, mind-bending world of ours.