Accessibility links
Norfolk Requires Developers To Do More Against Flooding New zoning rules in Norfolk, Virginia, require developers to include flood prevention measures. Some builders opposed the move, and warn it will raise costs for home buyers. 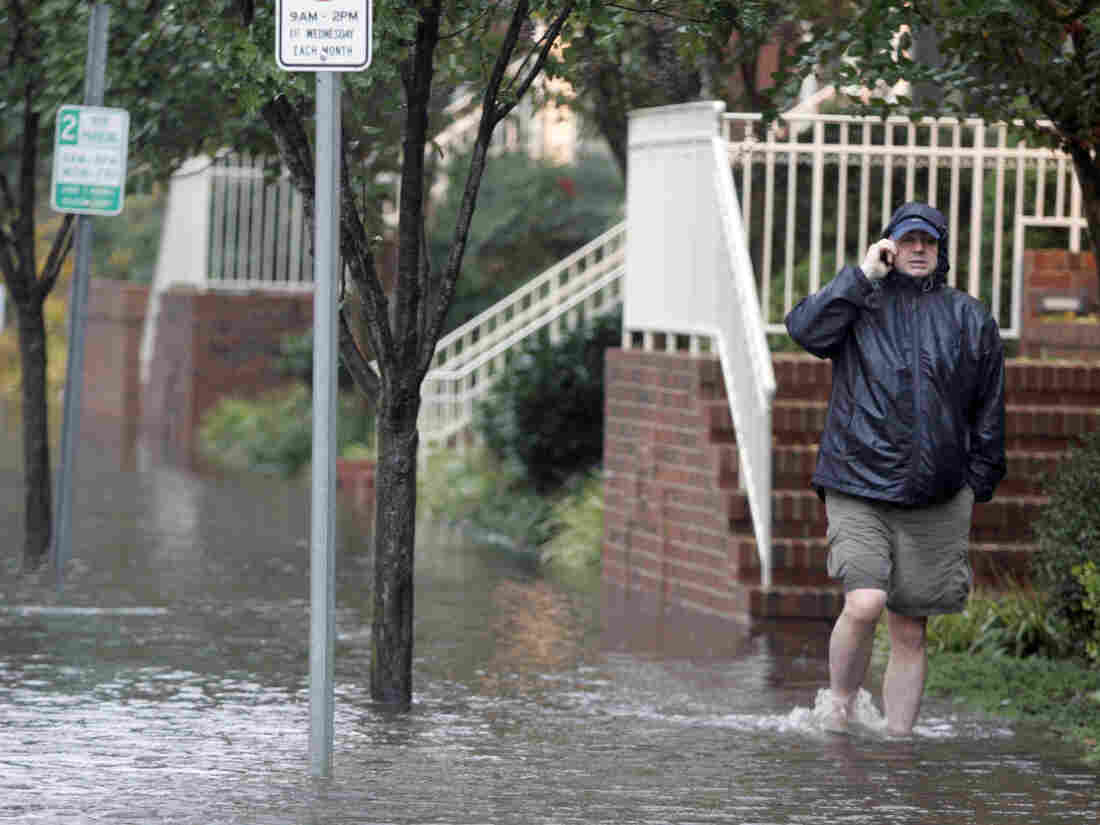 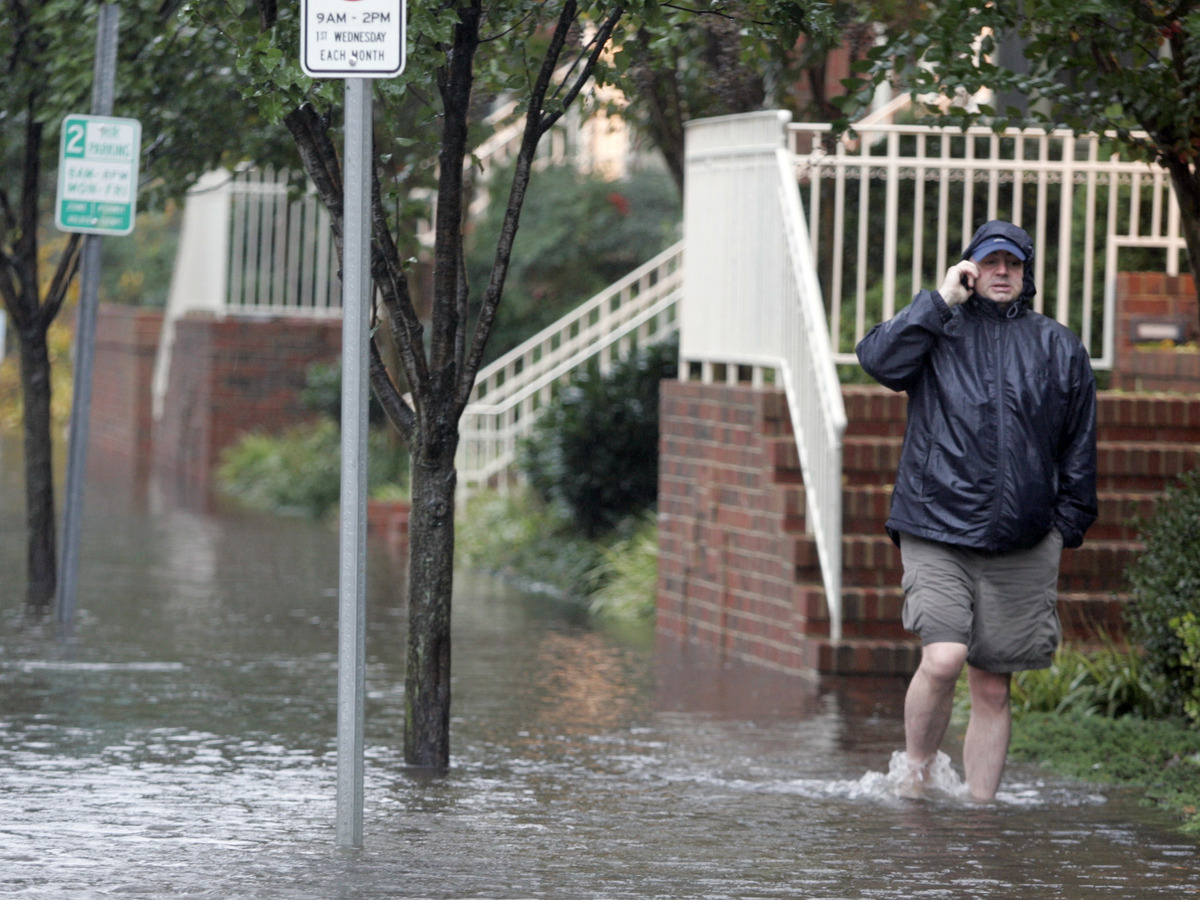 A resident in Norfolk, Va., after tropical storm Ida in 2009. New zoning rules require builders to include flood protection measures.

Norfolk, Va. is among the American cities most threatened by sea-level rise. A new zoning ordinance aims to get in front of that, but some home builders are not happy with the plan. The debate is a preview of the challenges residents of coastal areas may face in years to come, as more communities are threatened by rising seas.

For Norfolk, the rising tides are already a reality that can't be ignored.

"There are far too many evenings where the moon is full and the tide is high, where there are streets where the kayak is the preferred vehicle of choice," says George Homewood, the city's planning director.

Homewood says the city – surrounded by water on three sides and home to the world's largest naval base – has no choice but to get ready for rising seas.

"It is something that the citizens of our city are extremely and painfully aware of," he says.

Last year, the U.S. Army Corps of Engineers said Norfolk needs $1.8 billion in infrastructure improvements to reduce its flood risk. That's a huge, and possibly insurmountable, price tag. For now, the city is taking a smaller step to prepare for that increasingly wet future with its new zoning ordinance.

The regulations, taking effect March 1, require virtually all new construction – and many major home renovations – to be built on an elevated foundation, even in neighborhoods where flood insurance isn't required. It also sets up a point system that requires builders to take steps to make homes more sustainable and flood-resilient. Options include things like installing rain barrels to capture storm water, or using shatter-resistant windows to better withstand hurricanes.

Mary-Carson Stiff works in environmental advocacy and lives in a flood-prone Norfolk neighborhood. When Stiff and her husband bought the house a few years ago, sea-level rise and flooding were very much on her mind. She says she was happy to find a house on a hill, with a nice tall foundation, that's been standing for almost 100 years.

"The streets flood, but your homes may stay dry. That's certainly the case on our street," Stiff said.

Stiff can see a creek from her front porch, and says the road along it often floods during heavy rains and high tides. She supports the new ordinance, which passed the city council unanimously. 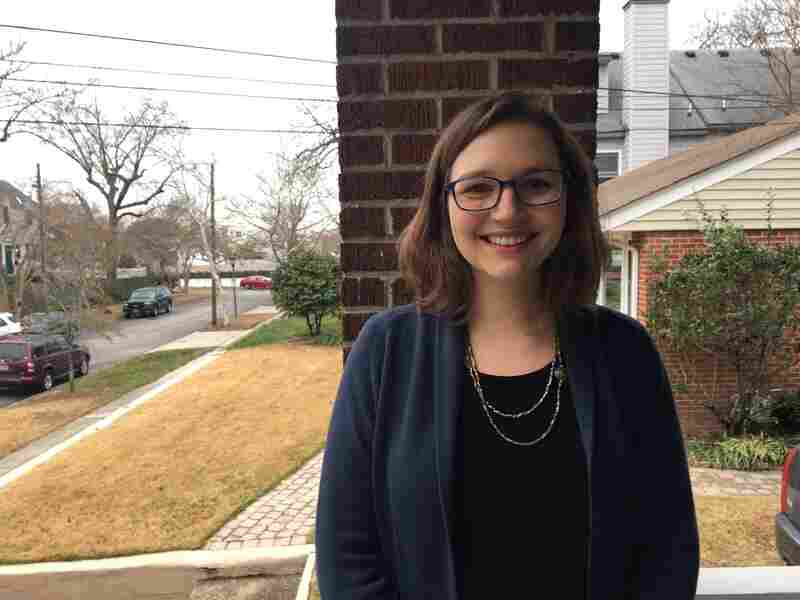 Mary-Carson Stiff looked for a home with a high foundation and low flood risk when she bought in Norfolk, Va. Sarah McCammon/NPR hide caption 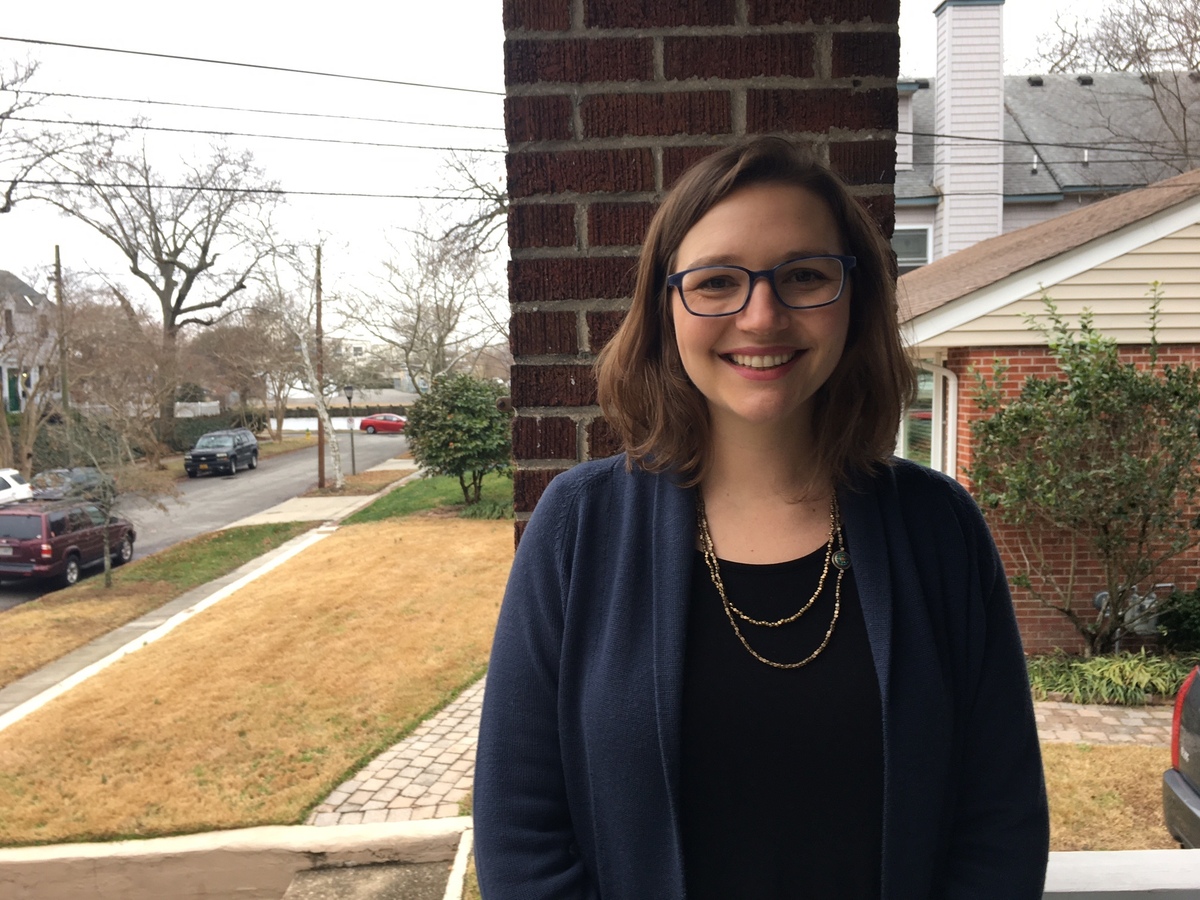 Mary-Carson Stiff looked for a home with a high foundation and low flood risk when she bought in Norfolk, Va.

But some local real estate agents and builders say they're worried about how the new rules – which also include some aesthetic guidelines along with flood mitigation measures – will affect their bottom line.

Nick Jacovides, President of EDC Homes, says he understands that flooding is a problem here. "Many times we're tearing down homes that are in flood zones, and building them up at the new flood elevations," he says.

But Jacovides has several concerns about the new rules. He says some buyers see rain barrels as eye-sores and mosquito traps. Plus, "it's certainly going to add to the cost of doing business and building the homes," he says, and "we're going to have to pass [that] through to the customers."

It does cost a bit more to install rain barrels or build a taller foundation, for example.

But Chad Berginnis, of the Association of State Floodplain Managers, says it will pay off for home buyers in at-risk areas. He says zoning rules that take sea-level rise into account will mean lower flood insurance premiums for homeowners.

"For most property owners ... it's that monthly house payment that becomes more important," Berginnis says. "And their monthly cost of ownership could go down significantly because of these standards."

Berginnis likes that Norfolk is applying the new standards outside the high-risk zone. He points to cities like Houston, which have seen more widespread flooding in recent years, as an example of why it's important to look beyond federal flood maps when planning for disasters. Houston is debating its own flood-prevention standards, which are set for a vote later this month.

"These types of standards should protect property values for decades to come," he says.