Accessibility links
Nick Kroll And John Mulaney Relive Raging Hormones And First Kisses In 'Big Mouth' The comic actors channel the indignities of puberty in their animated Netflix comedy series. Looking back on his own adolescence, Mulaney says: "I was always mystified." 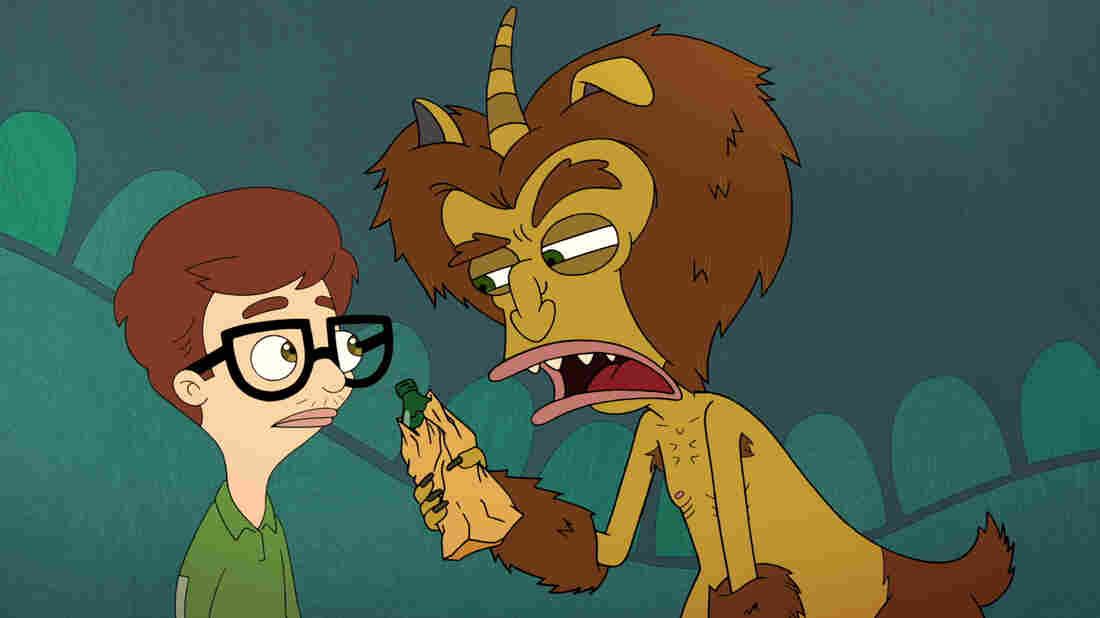 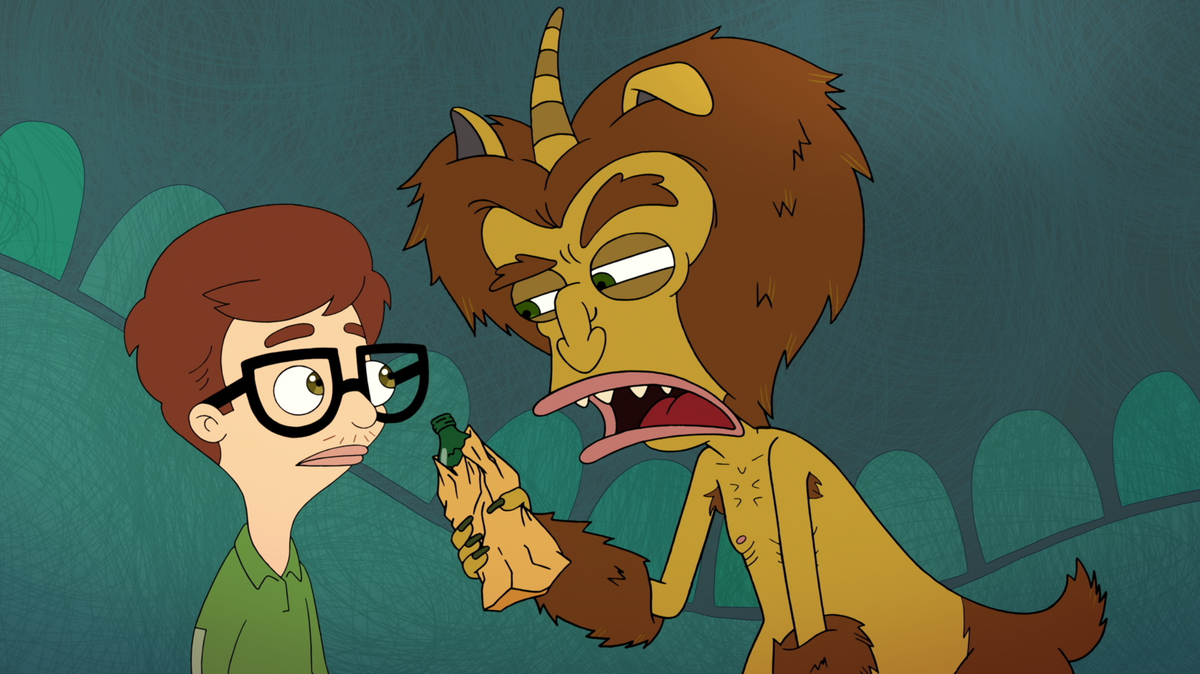 Andrew (voiced by John Mulaney) talks with the Hormone Monster (voiced by Nick Kroll) in the Netflix series Big Mouth.

Thirty-something comic actors Nick Kroll and John Mulaney are well beyond adolescence, but they still remember the indignities, hormone rushes and confusion of puberty — and they channel it all in their animated comedy Netflix series, Big Mouth.

You're Never Too Young To Be A 'Comeback Kid'

The changes Andrew experiences are embodied by a character known as the Hormone Monster. Kroll, who co-created the series and voices the monster, says his character is meant to illustrate what it's like for kids going through puberty.

"I think the philosophy of the show is you have this Hormone Monster that comes out during puberty and then slowly that monster becomes a part of you," Kroll says.

In addition to Big Mouth, Kroll and Mulaney are also hosting the Independent Spirit Awards, which honor the best independent films of 2017. The awards show airs live on IFC on Saturday.

John Mulaney: The character of the Hormone Monster ... sort of lives in Andrew's brain and next to him as a creature just kind of symbolizing all of the very mixed, weird feelings young Andrew is having, and a lot of the physical manifestations.

Nick Kroll: Yeah, I think when we were discussing the show [writers] Andrew [Goldberg] and Mark [Levin] and Jen [Flackett] were originally talking about the idea that there's this guy who is sort of an essence that's around Andrew, you know, like kind of like a hormone monster.

And then they approached me about it, and they were like, "We think there should be sort of like a hormone monster." And I immediately just said, [doing a voice,] "Touch yourself, Andrew!" ... And this is why you can do something like this animated, because you can then begin to personify these feelings and emotions that are kind of destroying and helping to form all these kids.

Mulaney: You're a 13-year-old and you're going through life looking like a 13-year-old, and inside you the Burning Man festival is going on.

Kroll: My first kiss was a truth or dare, and so I don't even know if that counts, but I was on the back of a bus on the way back from a bar mitzvah and it was with my friend Lizzie Gould, who actually the character of Jessi, voiced by Jessi Klein, is based on loosely. And I didn't know what I was doing and I just jammed my tongue down her throat and ... she made it very clear that I was not doing it right. And in later years, I've been like, "Yeah, that's very fair. That's a very fair critique."

Mulaney: Oh yes, I kissed a girl named Mary, who I had a huge crush on. And when I had a crush, it was like, "Stop the presses! Crush!" Everyone had to know. I had to tell her and everyone around her and everyone in school, and put billboards up about it. They were exhausting. And she was my 8th-grade crush and I did get to kiss her once, and that was the only time. ... I was not able to ever play anything cool, so I might've been like, "Thank you for kissing me! Oh, I love you so much!"

On Mulaney fainting in middle school during The Miracle of Life, a documentary that shows a baby being born

Mulaney: I will admit I fainted during the Miracle of Life video during the actual reveal. ... When the baby came out, I was like, "Huh! What is happening there?" And then I hit the floor. And that didn't happen once, Terry, that happened three times. ... I was not prepared at that moment.

We were just happily watching this video that was, I think, made in 1972 with era-appropriate clothing. And the first time, I was like, "What's that?" and then I hit the floor. The second time was like, "I think they're going to show that video again. Gotta play it cool. Don't faint." And then I fainted. 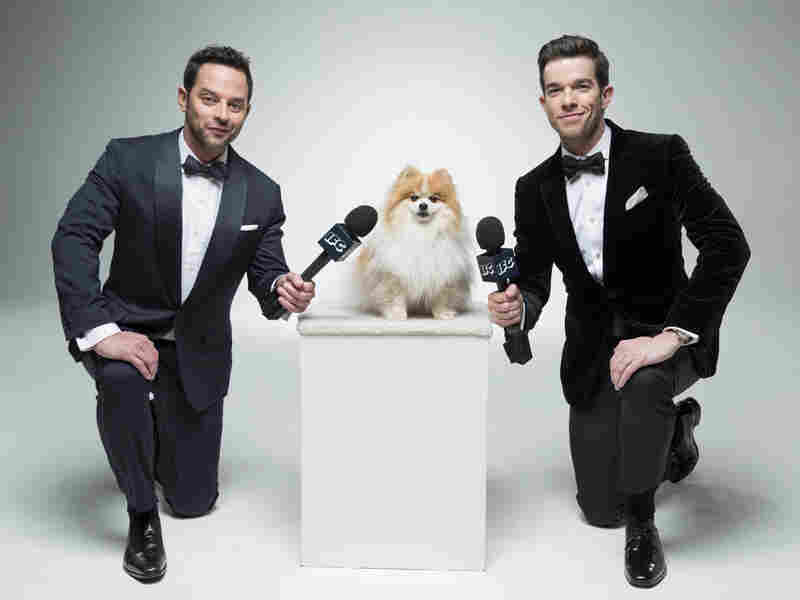 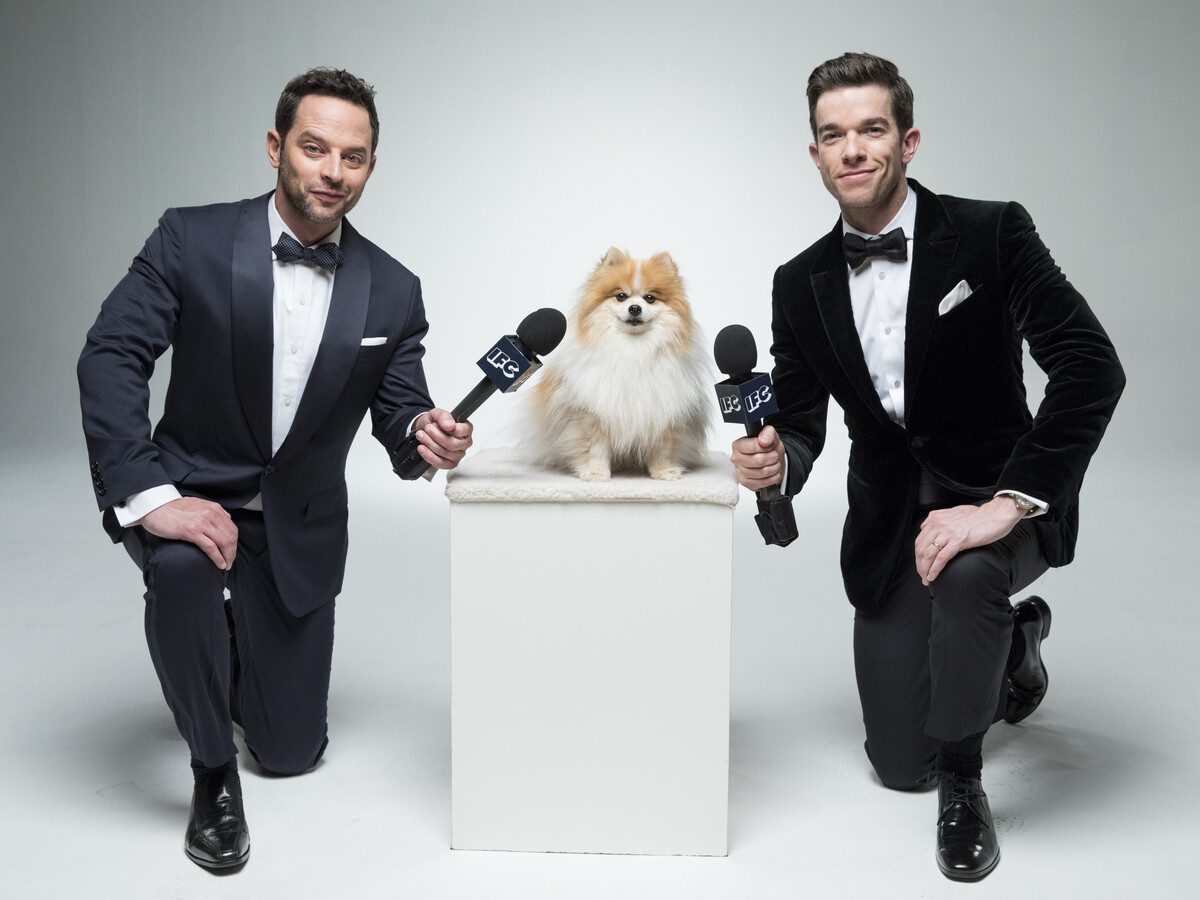 Nick Kroll and John Mulaney will host the Independent Spirit Awards on IFC on March 3.

And then the third year everyone was looking at me being like, "He's going to faint as soon as the baby comes out," and the pressure of all of that gave me a panic attack, and I collapsed.

Kroll: I wouldn't say it's awkward. I think it's an incredibly interesting time to be trying to navigate how to be funny. And ultimately we're hosts trying to have a show that everybody has a good time at, while simultaneously aware of what a wildly crazy time it is to be existing in our culture.

Mulaney: We want to be respectful of what everyone has gone through, and, however, not avoid it and act like we're not on planet Earth.

Heidi Saman and Seth Kelley produced and edited this interview for broadcast. Bridget Bentz, Molly Seavy-Nesper and Nicole Cohen adapted it for the Web.