Accessibility links
Depth Of Russian Politician's Cultivation Of NRA Ties Revealed Alexander Torshin's links to NRA leaders are deeper than previously known, NPR has learned. He claims to have met Donald Trump in 2015 and served as a U.S. election observer in 2012 through the NRA. 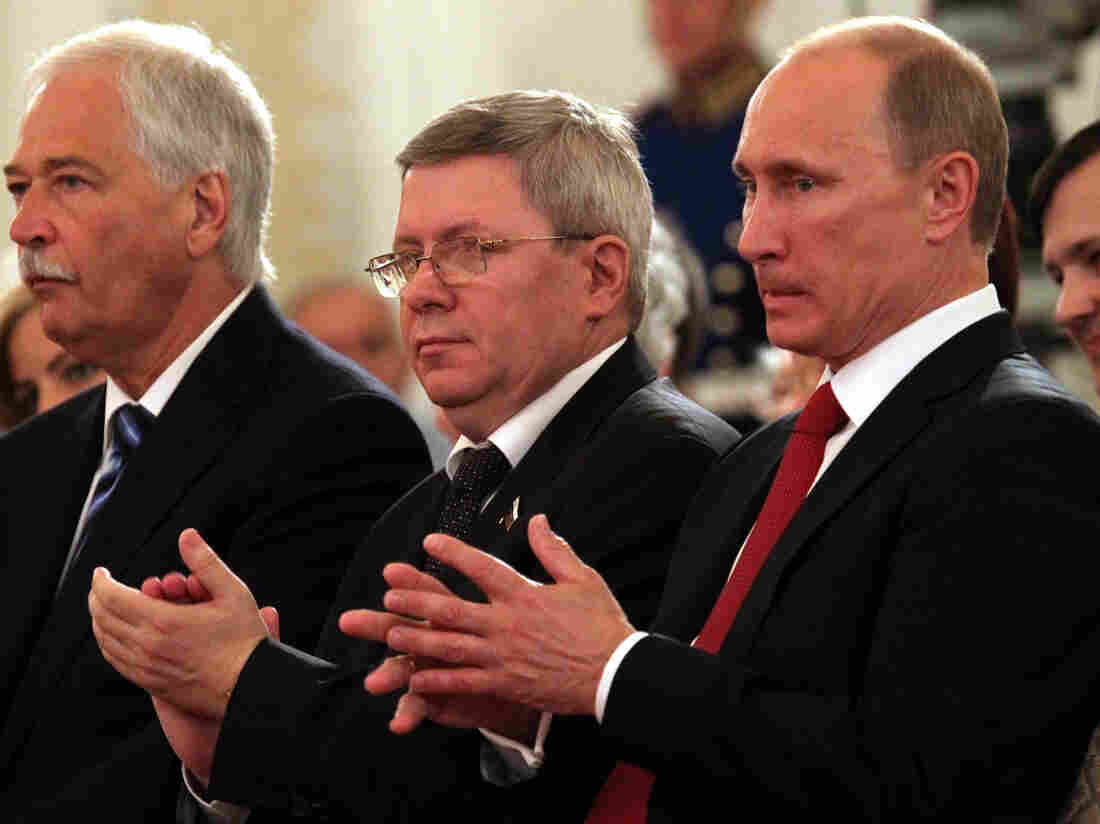 Russian politician Alexander Torshin, standing next to then-Russian Prime Minister Vladimir Putin, attends a ceremony at the Kremlin in 2011. Torshin is a lifetime member of the National Rifle Association and says he met Donald Trump through the group in 2015. Konstantin Zavrazhin/Getty Images hide caption 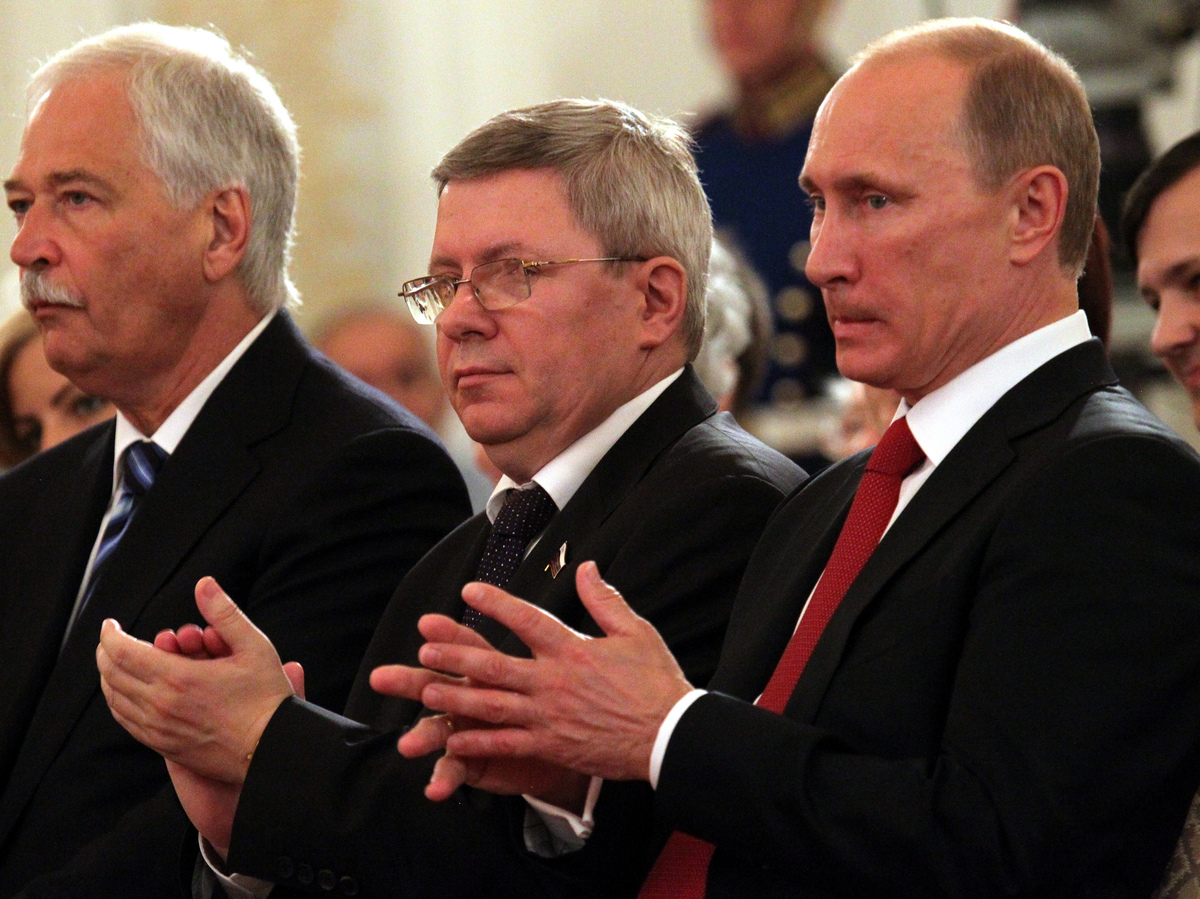 Russian politician Alexander Torshin, standing next to then-Russian Prime Minister Vladimir Putin, attends a ceremony at the Kremlin in 2011. Torshin is a lifetime member of the National Rifle Association and says he met Donald Trump through the group in 2015.

A prominent Kremlin-linked Russian politician has methodically cultivated ties with leaders of the National Rifle Association and documented efforts in real time over six years to leverage those connections and gain deeper access into American politics, NPR has learned.

Russian politician Alexander Torshin said his ties to the NRA provided him access to Donald Trump — and the opportunity to serve as a foreign election observer in the United States during the 2012 election.

Torshin is a prolific Twitter user, logging nearly 150,000 tweets, mostly in Russian, since his account was created in 2011. Previously obscured by language and sheer volume of tweets, Torshin has written numerous times about his connections with the NRA, of which he is a known paid lifetime member. NPR has translated a selection of those posts that document Torshin's relationship to the group.

Alleged Link Between NRA And Russia Becomes Fodder For The Left

These revelations come amid news that the FBI is investigating whether Torshin, the deputy governor of the Bank of Russia, illegally funneled money to the NRA to assist the Trump campaign in 2016, McClatchy reported in January.

In a letter to Sen. Ron Wyden, D-Ore., a member of the Senate intelligence committee, the NRA denied any wrongdoing and suggested the FBI is investigating Torshin, not the NRA. Neither the NRA nor Torshin responded to inquiries from NPR.

Investigations by Congress and the Department of Justice have revealed that the Russian government has sought to sharpen political divisions among American citizens by amplifying controversial social issues. Investigators have expressed concern about Russian links to the NRA, one of the most politically polarizing organizations in the U.S.

Torshin is a former Russian senator and served as the deputy speaker of Russia's parliament for more than a decade. Known as a Putin ally, he also spent time on Russia's National Anti-Terrorism Committee, a state body that includes the director of Russia's internal security service and the ministers of defense, interior and foreign affairs.

Translation of November 2016 tweet: "For 15 years, I've traveled to the U.S. with official delegations, and more often — privately. In this time, I NEVER HEARD ONE BAD WORD ABOUT RUSSIA!"

Torshin's use of NRA connections to open doors, and his 2015 claim to know Trump through the organization, raise new questions about the group's connections with Russian officials — at a time when the organization is being roundly criticized by its opponents, and at times the president himself, for opposition to gun control.

The president has also defended the group in recent days as the gun debate has re-emerged following a Florida school shooting, including a tweet calling the group's leaders "Great American Patriots."

The NRA has been a key part of Trump's conservative base. After a meeting with lawmakers in which Trump angered many conservatives for entertaining proposals for gun control, the president tweeted that he had another meeting with NRA leaders in the Oval Office on Thursday night.

Good (Great) meeting in the Oval Office tonight with the NRA!

On his verified Twitter account, Torshin talked about how he knew Trump through the NRA, citing a connection at the group's 2015 convention. Responding to a tweet about comedian Larry David accusing Trump of being a racist, Torshin said he knew the businessman through the NRA, and he defended him.

Translation of November 2015 tweet: "A comedian should make people laugh! Right? So he is trying! I know D. Trump (through NRA). A decent person."

"I saw him in Nashville" in April 2015, Torshin added later, the date and site of the NRA's 2015 convention. Trump gave a speech at that convention, the outlines of which would become familiar as his stump speech throughout the 2016 presidential campaign. The White House did not respond to repeated requests for comment by NPR but in 2017 denied to Bloomberg News that Trump has ever met Torshin.

Among his tens of thousands of tweets, Torshin also documented his attendance at every NRA convention between 2012 and 2016, only some of which have been previously reported.

Torshin's attendance at the NRA convention in 2016 is where he reportedly met with Donald Trump Jr.

Torshin had made repeated attempts to meet with Donald Trump himself at that convention during the presidential election year, but there is no evidence of this occurring. A conservative activist with ties to Torshin aide Maria Butina reached out to the Trump campaign in 2016, saying that Russia was "quietly but actively seeking a dialogue with the U.S." and would try to use the NRA convention to make "first contact," the New York Times reported.

"Putin is deadly serious about building a good relationship with Mr. Trump," the activist, Paul Erickson, wrote. "He wants to extend an invitation to Mr. Trump to visit him in the Kremlin before the election." Erickson has business ties to Butina, having started an LLC with her in South Dakota.

Torshin has used his repeated trips to NRA conventions to cultivate relationships with top NRA officials. And his Twitter account documents that he has personally met with every person who has been president of the NRA since 2012.

On Twitter, Torshin portrayed these meetings as more than merely casual encounters. In 2017, he tweeted that he was bringing a gift to then-NRA President Allan Cors and suggested he was familiar with Cors' hobbies.

Cors is the founder of the Virginia Museum of Military Vehicles, according to its website.

In a public Dropbox album that Torshin linked to from his Twitter account, he is seen meeting with former NRA President Jim Porter as well as another former NRA president, David Keene.

His tweets suggest a longtime relationship with Keene, who repeatedly appears in photos as Torshin documents his visits, suggesting that their meeting was not merely coincidental. Keene did not respond to a request for comment.

Torshin has also met the current president of the NRA, Pete Brownell, who was part of an NRA delegation that visited Moscow in 2015.

These relationships that he cultivated appeared to open another door. Torshin came to the United States in 2012 as an international election observer and watched as ballots were cast during the Obama-Romney presidential contest in Tennessee. This was possible, he wrote, because of his NRA links.

Translation of January 2015 tweet: "I was there at Obama's last election! The NRA card, to me as an observer from Russia, opened access to any [polling] station."

"Tennessee resident Kline Preston requested Mr. Torshin to be an international observer in November 2012," Adam Ghassemi, a spokesman for the Tennessee secretary of state, told NPR. The Washington Post reported last year that Preston, a Tennessee lawyer, was the one who originally introduced Torshin to Keene back in 2011.

The heat is on the Russian politician, who was alleged by Spanish police to have directed financial transactions for the Russian mob. Not only is the FBI reportedly investigating him — the bureau declined to comment for this story — but lawmakers involved in congressional investigations have also expressed interest in Torshin.

Both the Senate and House intelligence committees are currently engaged in investigations into potential ties between the Trump campaign and Russia.

Wyden, the top Democrat on the Senate Finance Committee and a member of the Senate intelligence committee, has demanded that the Treasury Department's Financial Crimes Enforcement Network hand over documents related to Torshin and the NRA.

"The NRA and its related entities do not accept funds from foreign persons or entities in connection with United States elections," NRA General Counsel John Frazer wrote in response to a request from Wyden to turn over documents related to transactions between the NRA and Russian citizens. "NRA political decisions are made by NRA officers and executive staff, all of whom are United States citizens. No foreign nationals are consulted in any way on these decisions."

Rep. Adam Schiff, the top Democrat on the House intelligence committee, told NPR this week that the committee's members have asked relevant witnesses about the NRA through the course of their investigation.

"I can't go into what we've been able to learn thus far on that issue. I can tell you it's one of deep concern to me and to other members of the committee, that we get to the bottom of these allegations that the Russians may have sought to funnel money through the NRA," Schiff said. "It would be negligent of us not to investigate."

Glenn Simpson, the co-founder of research firm Fusion GPS, alluded to Torshin and the NRA during his closed-door testimony before the House intelligence committee in November.

"It appears the Russians, you know, infiltrated the NRA. And there is more than one explanation for why," Simpson told lawmakers. "But I would say broadly speaking, it appears that the Russian operation was designed to infiltrate conservative organizations. And they targeted various conservative organizations, religious and otherwise, and they seem to have made a very concerted effort to get in with the NRA."

Not only are congressional investigators interested in the NRA's relationship with Russia, but this inquiry comes as the NRA is receiving additional pressure from groups hoping to pass more gun restrictions into law and as dozens of American companies have cut ties with the organization in response to the Parkland, Fla., shooting last month.

"These revelations suggest that for years the NRA courted a top Putin ally who is now reportedly attracting scrutiny from the FBI," John Feinblatt, president of Everytown for Gun Safety, told NPR. "NRA leaders still haven't explained their close relationship with Russian officials in Putin's orbit. Until they do, people will continue to wonder what the NRA is hiding."

NPR's Alina Selyukh and Audrey McNamara contributed to this story.