Accessibility links
Watching The Lazy, Cynical Remake Of 'Death Wish' Will Give You One It's violent, formulaic and lightly repellent. But come on, you knew that already.

Watching The Lazy, Cynical Remake Of 'Death Wish' Will Give You One

Watching The Lazy, Cynical Remake Of 'Death Wish' Will Give You One 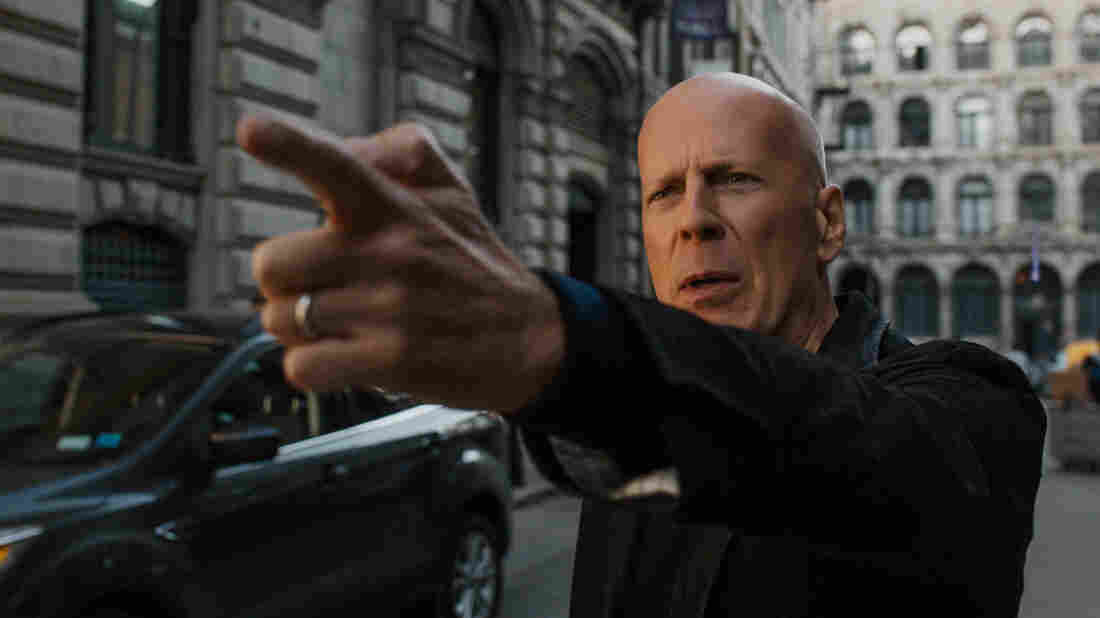 "Stop! In the name! Of love! Be-fore you break! My masculinity!" Paul Kersey (Bruce Wills) points at something in the otherwise pointless Death Wish. Metro-Goldwyn-Mayer Pictures hide caption 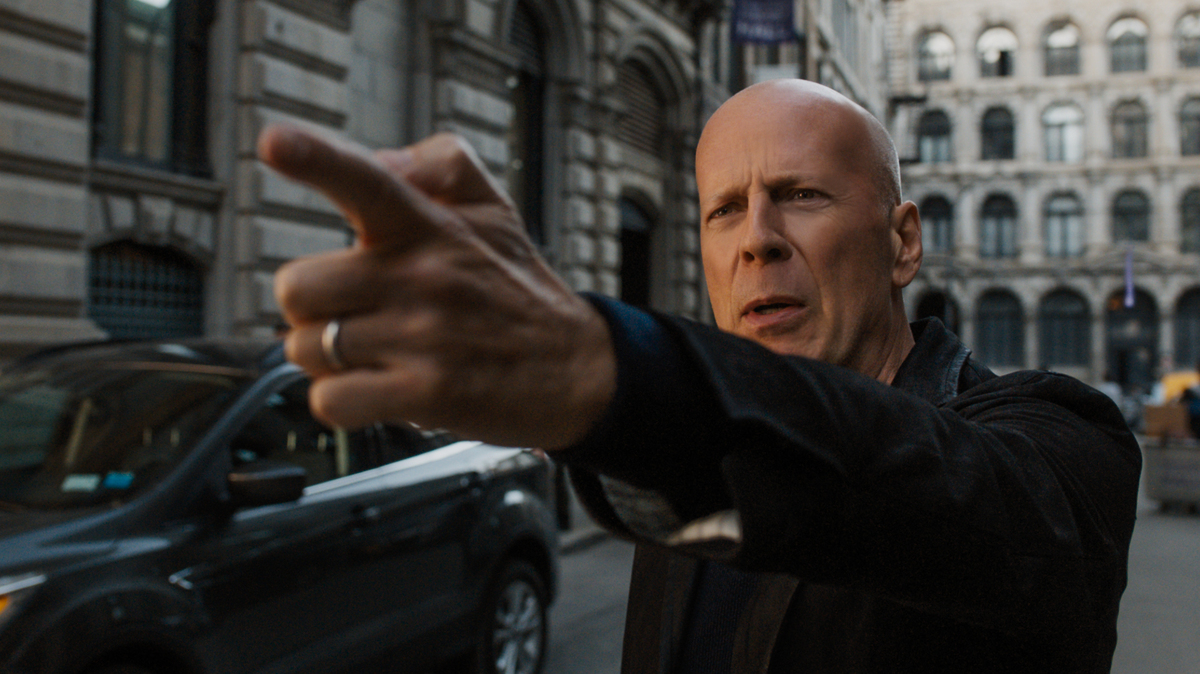 "Stop! In the name! Of love! Be-fore you break! My masculinity!" Paul Kersey (Bruce Wills) points at something in the otherwise pointless Death Wish.

Why are you reading this?

That's a serious question; I'm sincerely curious: Why are you sitting there, right now, reading a review of the movie Death Wish?

For my part, I can tell you that the reason I'm writing this review is because it's my job — but you? What's your excuse?

I mean: It's Death Wish.

If you place yourself in the former camp, nothing any critic can say will dissuade you from seeing it. In fact, the more scorn that gets heaped on what is, not for nothing, already a pretty scornful heap of a movie, the more you will feel justified in your ticket purchase.

But maybe, just maybe, there's a handful of you who belong to neither faction. Perhaps you're idly wondering how this remake of a 1974 vigilante-justice Charles Bronson flick engages with its subject, and interrogates the original film's assumptions and, perhaps, recontextualizes its central ethos of "we white straight men are under attack and thus are so completely justified in slaughtering — ah, defending ourselves — with extreme (and literal) prejudice"?

Okay, listen to you, dude. "Recontextualizes its central ethos." You're adorable.

What do you reasonably expect to find in a review of a film that has been so ruthlessly engineered to target the pleasure-centers of the most fearful and fragile cohort of American maleness? To deliver unto them an elaborately contrived series of events meant to prove that their view of the world is both only correct — and the only correct one?

Do you expect me to tell you that the film is not the thin and cynical fever-dream of those who ache to be reassured that cities are cesspits, the police ineffectual, and, as one character (Len Cariou, what are you doing?) intones, "If a man wants to protect his own [cocks shotgun], he has to do it himself"? Because it is that. It is precisely that.

Or are you perhaps reading this because you're wondering how far along star Bruce Willis' physical transformation into a thin-lipped cocktail peanut is proceeding? I will tell you: Apace. It is proceeding apace.

Did any part of you wonder whether this movie might possibly include — nay, proudly feature -- a training montage in which Willis cleans his gun to AC/DC's "Back in Black"?

Reader, it can, and it does.

But come on, you knew that.

Here's what else it does. Here's ... all it does: Surgeon Paul Kersey (Willis), his wife Lucy (Elisabeth Shue(!)) and teenage daughter Jordan (Camila Morrone) get targeted by some dirtbags. While Kersey is away, dutifully surgeoning at his Chicago hospital, said dirtbags invade the Kerseys' conspicuously, egregiously, hilariously suburban Evanston home, kill his wife and put his daughter in a coma.

(In the 1974 original, the dirtbags also brutally rape the daughter. That they do not do so in the remake likely qualifies, in director Eli Roth's mind, as progress.)

Cue the dog-whistles: C.S. Lewis' Christian parable The Lion, the Witch and the Wardrobe gets a cameo appearance, as does conservative radio host Mancow. A character reads aloud from the work of, I'm not making this up, Milton Friedman. At one point, reader, the dog whistles came so fast and furious that the press screening I attended got interrupted by a yellow Labrador Retriever, who stuck his head in the theater door and said, "Hey could you guys keep it down in here? I got a splitting headache."

No, okay, that didn't happen. But this did:

Willis stares at his brother (Vincent D'Onofrio) and whispers, "Look what these animals did to my baby." In the script, that line is meant to articulate Willis' heartrending despair. In execution, given the film's impatience for Willis' vigilante to get his vigil on already, it comes off as a coy invitation, brimming with breathless delight.

D'Onofrio and Willis are real actors, capable of delivering far, far more than is asked of them here. In the film's final act, the screenplay serves them up what might otherwise be a moment of real conflict, but Roth's direction seems so blithely uninterested in anything but eagerly justifying Willis' violently sadistic rampages that the scene plays as limp and useless as a vestigial tail.

That eager limpness is why this shoddy, formulaic and lightly repellent film fails as utterly is it does. It's useful, perhaps,to compare it to Michael Haneke's Funny Games and Bryan Bertino's The Strangers. Those films are similarly engineered to produce a powerful reaction in audiences — but that reaction is a nuanced and stubbornly difficult one. Their onscreen violence is luridly graphic, and it works on us in a purely visceral way — we find ourselves longing for the victims to turn the tables, to strike back, to exact bloody, painful vengeance. Those films want us to both indulge a thirst for blood and question it at the same time. They implicate us, discomfit us — and they leave us shattered.

Death Wish was originally slated to be released last November, but was pushed to March — not officially in reaction to the Las Vegas shooting on October 1 that killed 58 people, but only days after it.

It arrives in theaters now, mere weeks after the latest mass shooting, and wants its audience simply to nod vigorously along with every hail of bullets, to cheer every mutilation. It asks nothing, and offers only the blanket assertion that feelings of masculine inadequacy — "The most important thing a man can do is protect his family, and I failed," Willis declaims — can be obviated ballistically.

Which is to say: It's Death Wish. Forty-four years later.