Accessibility links
NPR Poll: After Parkland, Number of Americans Who Want Gun Restrictions Grows More than 9 in 10 Americans support mandatory background checks for all gun buyers. That's one finding in a new NPR/Ipsos poll that shows an increasing level of support for gun control policies. 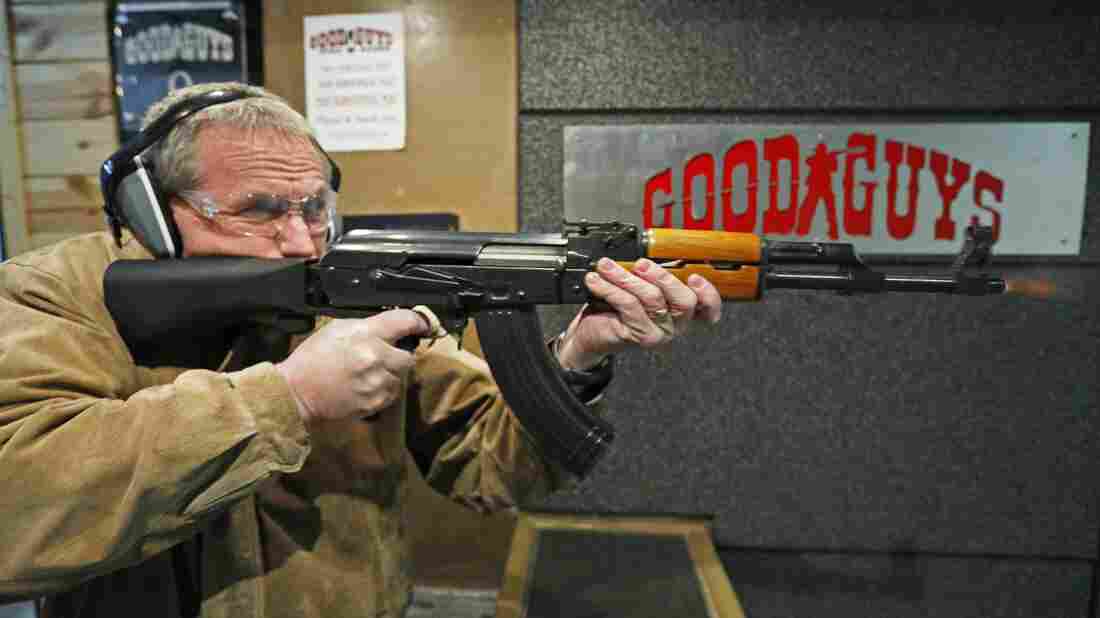 Vince Warner fires an AK-47 with a bump stock installed at Good Guys Gun and Range in Utah. A significant majority of Americans favor outlawing the attachment, according to the latest NPR/Ipsos poll. George Frey/Getty Images hide caption 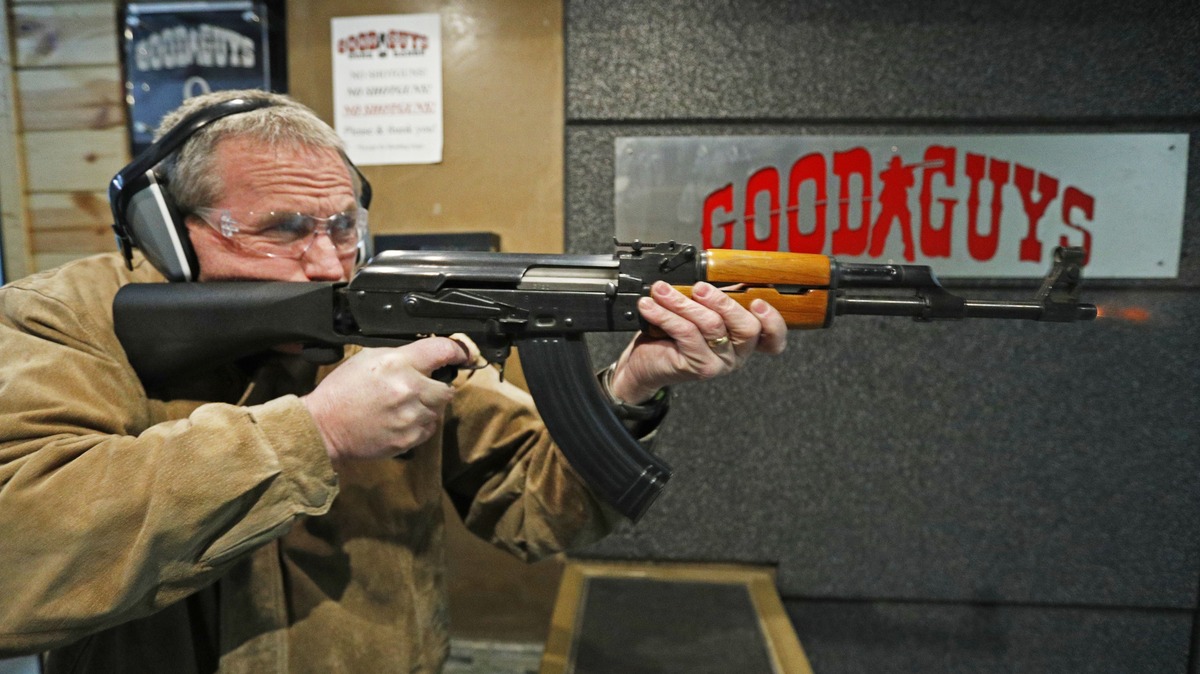 Vince Warner fires an AK-47 with a bump stock installed at Good Guys Gun and Range in Utah. A significant majority of Americans favor outlawing the attachment, according to the latest NPR/Ipsos poll.

An increasing number of Americans, both Republicans and Democrats, want more gun regulation, according to a new NPR/Ipsos poll that surveyed people in the aftermath of the Parkland school shooting.

The poll also found widespread bipartisan support for a range of gun-control policies, including:

The only policy intended to curb gun violence that is opposed by a majority of Americans (59 percent) is the one most frequently touted by President Trump — the idea of training teachers to carry guns in schools.

....History shows that a school shooting lasts, on average, 3 minutes. It takes police & first responders approximately 5 to 8 minutes to get to site of crime. Highly trained, gun adept, teachers/coaches would solve the problem instantly, before police arrive. GREAT DETERRENT!

The poll also found that while nearly every gun policy was supported by a majority of both Republicans and Democrats, the one exception was arming teachers.

There was a clear-cut partisan gulf — 68 percent of Republicans favored the idea of training teachers to carry guns compared to just 18 percent of Democrats. Arming teachers was by far the most polarizing policy suggestion; the poll found a 50-point divide between Republicans and Democrats.

Trump's in sync with his base

The president's outspoken criticism of schools as gun-free zones and his recent rhetoric calling for a comprehensive gun bill suggests he's acutely aware of how his base voters feel about gun policies — and the growing desire, even among Republicans, for some sort of stricter gun-control legislation.

"We see in this study, a majority of Republicans saying that they are supportive of a variety of different gun-control measures, many of which Trump mentioned explicitly in his [White House] briefing," said Chris Jackson, director of the public polling team at Ipsos. "And that's in contrast to a lot of Republican elected officials, who have taken a much more Second Amendment absolutist stance."

Although Trump remains friendly with the National Rifle Association and its leadership, he's recently shown a willingness to challenge GOP orthodoxy on guns.

Trump Angers Conservatives Over Guns While Negotiating With Lawmakers On TV

In a televised White House meeting with legislators Wednesday, Trump surprised (and angered) many of his fellow conservative lawmakers with his ad-hoc approach to gun-control policy. He questioned his fellow Republicans' relationship with the NRA and dismissed a concealed carry provision that conservatives wanted as a trade-off for some restrictions.

"They have great power over you people. They have less power over me," Trump told GOP lawmakers at that meeting, adding, "Some of you people are petrified of the NRA. You can't be petrified."

Trump suggested he was open to expanding background checks and possibly raising the age to purchase an AR-15. (Both popular measures, according to the NPR/Ipsos poll).

"President Trump is actually closer to where the Republican base is on the issue of guns than a lot of Republican elected officials," Jackson said. "And I think this is something that Trump has done a lot through his political career; he often times finds himself closer to the Republican base than the establishment does."

Of course, the president has a history of adopting popular opinions and speaking to the polls, and then subsequently reversing his position and reverting to a more traditionally conservative attitude, as he did with his initial support for a bill that would protect DACA recipients from deportation.

Any hope for a quick legislative answer to the gun debate fell apart in the Senate Thursday. And although the Senate now has no plans to vote on gun legislation in the near future, the NPR/Ipsos poll finds that a majority of Americans (78 percent) say Congress needs to do more to address gun violence.

But the intensity for congressional action lies with the Democrats — 93 percent of whom want more action, compared to 68 percent among Republicans.

Jackson said the biggest change he's noticed since the October survey is the overall importance people are giving to the gun debate. Crime/gun violence is now the No. 1 issue worrying Americans. (Last October, it was terrorism).

The shift since last fall is largely because more Democrats and independents say they're concerned about guns, but Republicans shifted some as well.

And the poll found Americans are currently saying guns will be an important factor in their vote this November. Roughly two-thirds, or 63 percent, said so.

Traditionally, gun control is one of those issues that's dominated by a small slice of the electorate — an energized group of committed gun-rights activists.

But the political winds may be shifting.

"This data indicates there's actually an increasing energy on the side of gun control," Jackson said. And "given that guns have become very partisan, that may have really significant results in the midterms."

And there are signs the NRA's influence among voters may be declining. The NPR survey shows a decreasing number of Americans overall (led by a shift in Democrats' attitudes) said the NRA represents their views — just 36 percent overall down from 43 percent in October.

There are still some major disagreements along party lines that reflect the overall gun debate in the country.

And likewise, when people were asked whether they believed the premise that the only way to stop a bad guy with a gun is a good guy with a gun — there was a split along partisan lines — 71 percent of Republicans agreed, compared to 24 percent of Democrats.

The split over Trump's handling of the Parkland shooting situation seems to mirror his overall approval rating and shows how much partisanship affects people's perspectives — 71 percent of Republicans approved of how the president handled the aftermath of the school shooting, compared to just 9 percent of Democrats.

The poll was conducted from Feb. 27-28 with a survey sample of 1,005 adults across the country, chosen randomly from Ipsos's online panel. They were interviewed in English, and the sample includes 351 Democrats, 341 Republicans and 203 independents. It has a margin of error of plus or minus 3.5 percentage points.