Accessibility links
Puerto Rico And Its Teachers' Unions Clash Over Proposed Charter Schools The island's government wants overhaul education, including by introducing charter schools and closing some public schools But critics say they're using Hurricane Maria damage as an excuse. 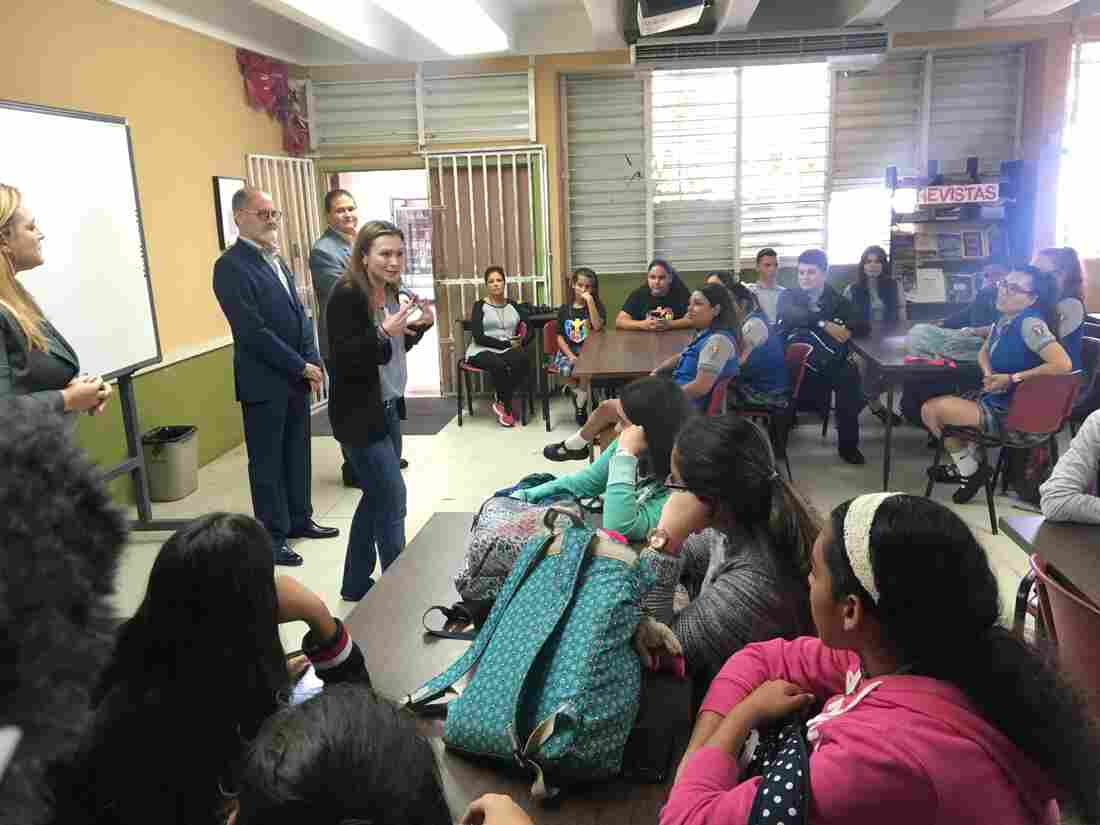 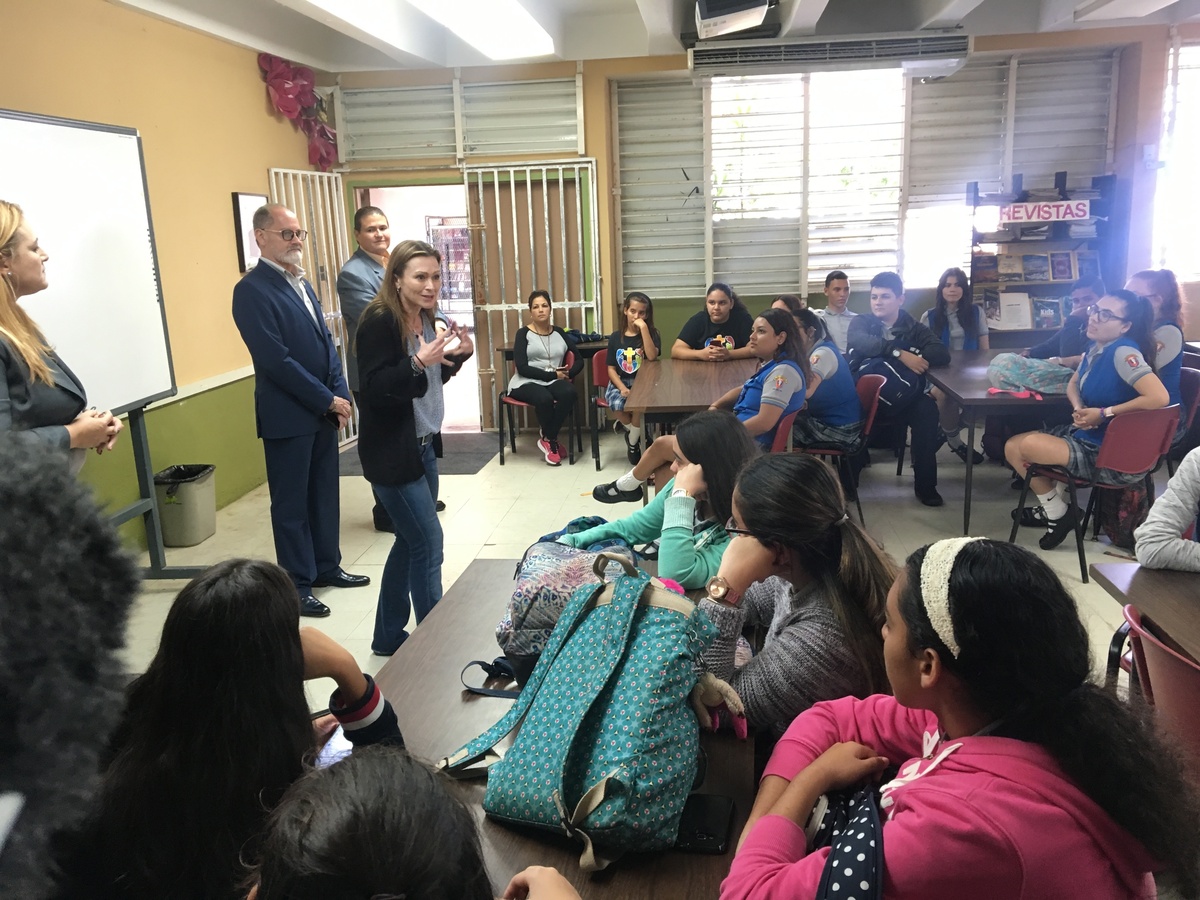 Puerto Rico Education Secretary Julia Keleher visits a high school in Arecibo, Puerto Rico, to talk to students about her proposed education reform. It would introduce charter schools to the public school system.

Julia Keleher, Puerto Rico's education secretary, stood in front of a school library full of high school students and asked them to do something students in Puerto Rico's public schools aren't often asked.

"Take out your phones," she said. "Look up the definition of charter school."

A girl's hand shot up.

"A charter school," the girl read, "is a school that receives government funding but operates independently of the established state school system in which it is located."

Keleher repeated after the girl, putting emphasis on "government funding" and "independently."

The point she really wanted to drive home was that charter schools, while run by private entities, are still public schools.

"But everyone is going to take to the streets and say, 'you want to privatize our schools!'" Keleher told the students. "I don't. It's still public money. Your money."

Most of the students in the room had never heard of a charter school. But Keleher knew that before long, her critics – notably the island's teachers' unions – would be mobilizing to derail her plan to transform the island's troubled public school system. Introducing charter schools is a central part of her plan. So Keleher was playing offense.

That is not how Puerto Rico's teachers unions and their allies see it.

Charter schools continue to be controversial because they are not helpful for students and often hubs for "fraud, waste and mismanagement" because of lagging accountability, according to a 2015 joint report from three groups. Supporters of charter schools say they are good for students because they tend to be high-performing and have the freedom to be innovative.

Teachers' unions in Puerto Rico have responded to the government's proposed overhaul with protest, anger and derision. Since Gov. Ricardo Rossello presented it to the legislature last month, critics have said he and Keleher are using the damage that Hurricane Maria inflicted on the island and its schools as justification to push privatization, much like the governor recently announced his intention to sell off Puerto Rico's publicly owned electric grid. 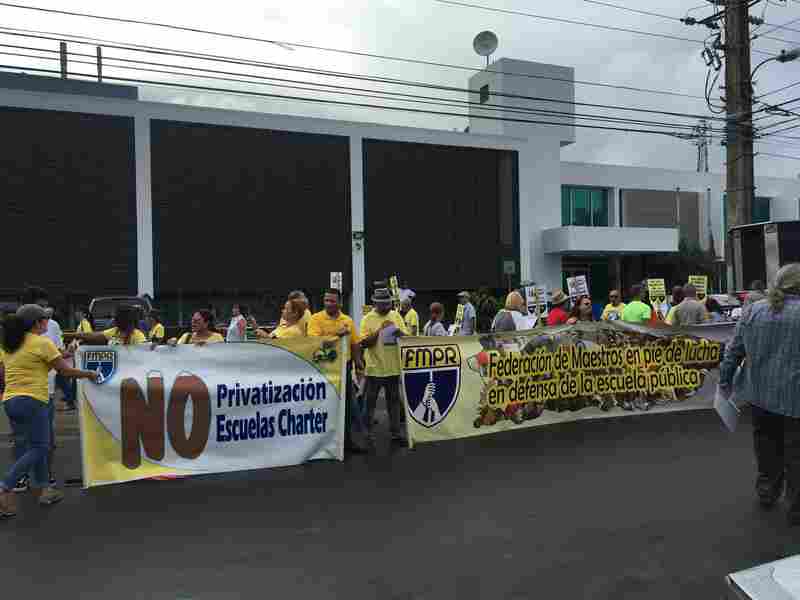 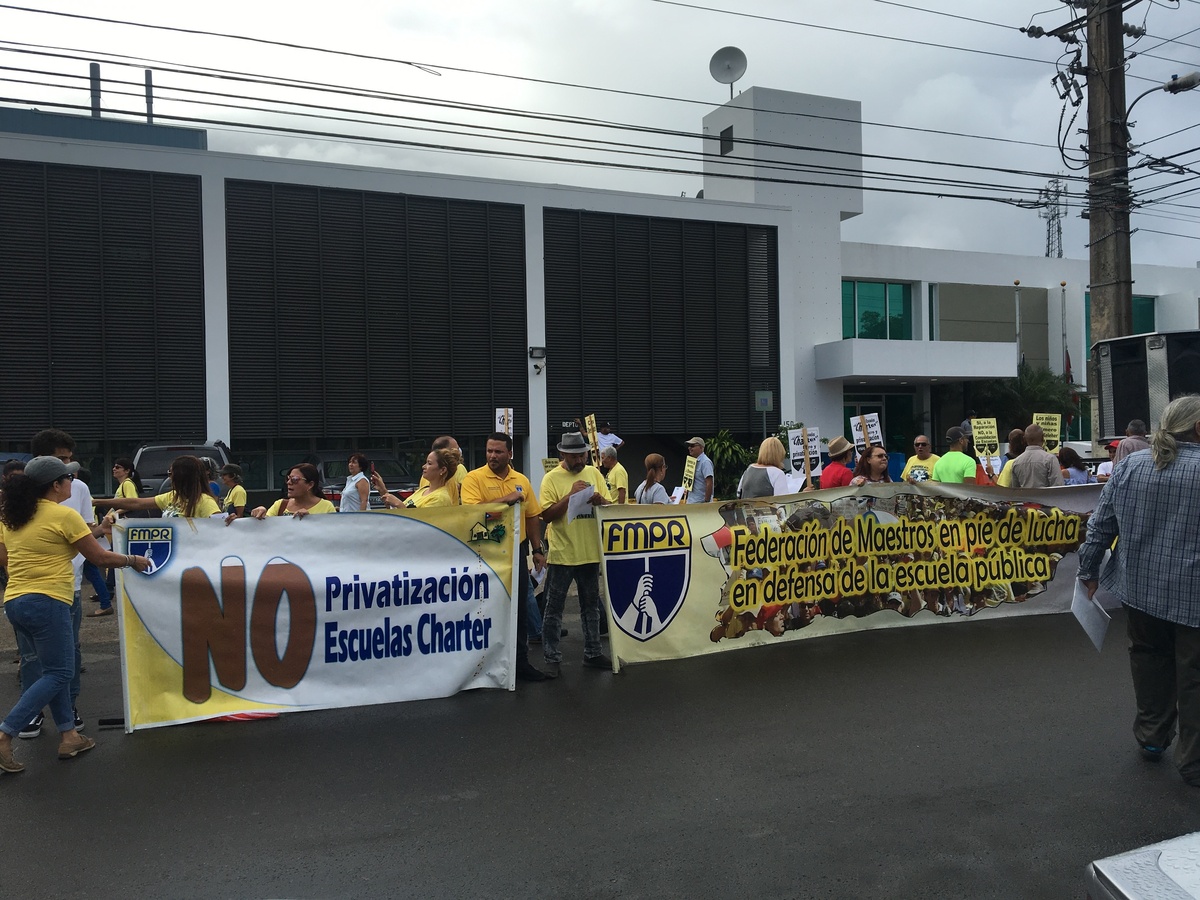 Teachers protest outside Puerto Rico's Department of Education. An education reform bill in the legislature would allow charter schools in the island's public school system, something the teachers' unions oppose.

Speaking at a recent protest outside the Department of Education, Mercedes Martinez, president of the Puerto Rico Teachers' Federation, likened the reform proposal to a corporate overhaul.

"They think that because our island is vulnerable, because it doesn't have electricity, that we're going to let them privatize our schools, get rid of our teachers," she said.

The teachers' unions tick off a litany of concerns. They say that charter schools, freed from many of the rules that govern traditional public schools, will divert funding from those schools while being free to pay teachers less, eliminate benefits, and kick out under-performing students.

They also oppose the reform plan's proposal to begin issuing school vouchers that families could use to attend a public or private school of their choosing.

"Everyone knows what the vouchers do to public schools," Aida Diaz, who leads the Puerto Rico Teachers' Association, said at an event in Washington this week. "They take money from public schools to private schools. So we have a budget that is tight, and now we are having money taken from our budget."

Her organization marched to the governor's mansion last month but Gov. Rosselló was visiting charter schools in Pennsylvania, according to his social media posts.

That Puerto Rico's public school system needs restructuring is not in question. Student enrollment has declined by 45 percent since 2004, as a decade-long recession has driven hundreds of thousands of people from the island. Administrative costs eat up a large share of the department's $2.5 billion budget, limiting the availability of technology and text books. Hurricane Maria has made the situation worse. 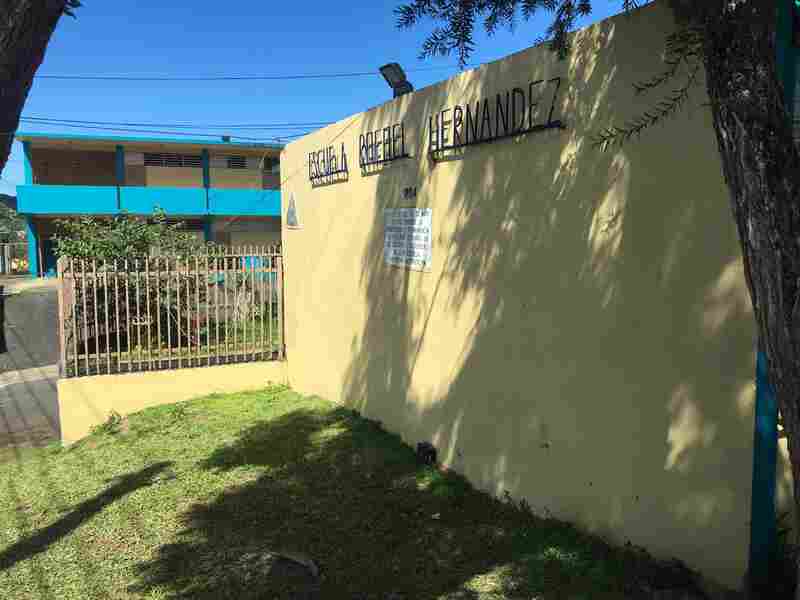 The Escuela Rafael Hernandez is a rural elementary and middle school in the mountains outside San Juan. Parents fear the dwindling enrollment, made worse by Hurricane Maria, will lead the government to close the school. Adrian Florido/NPR hide caption 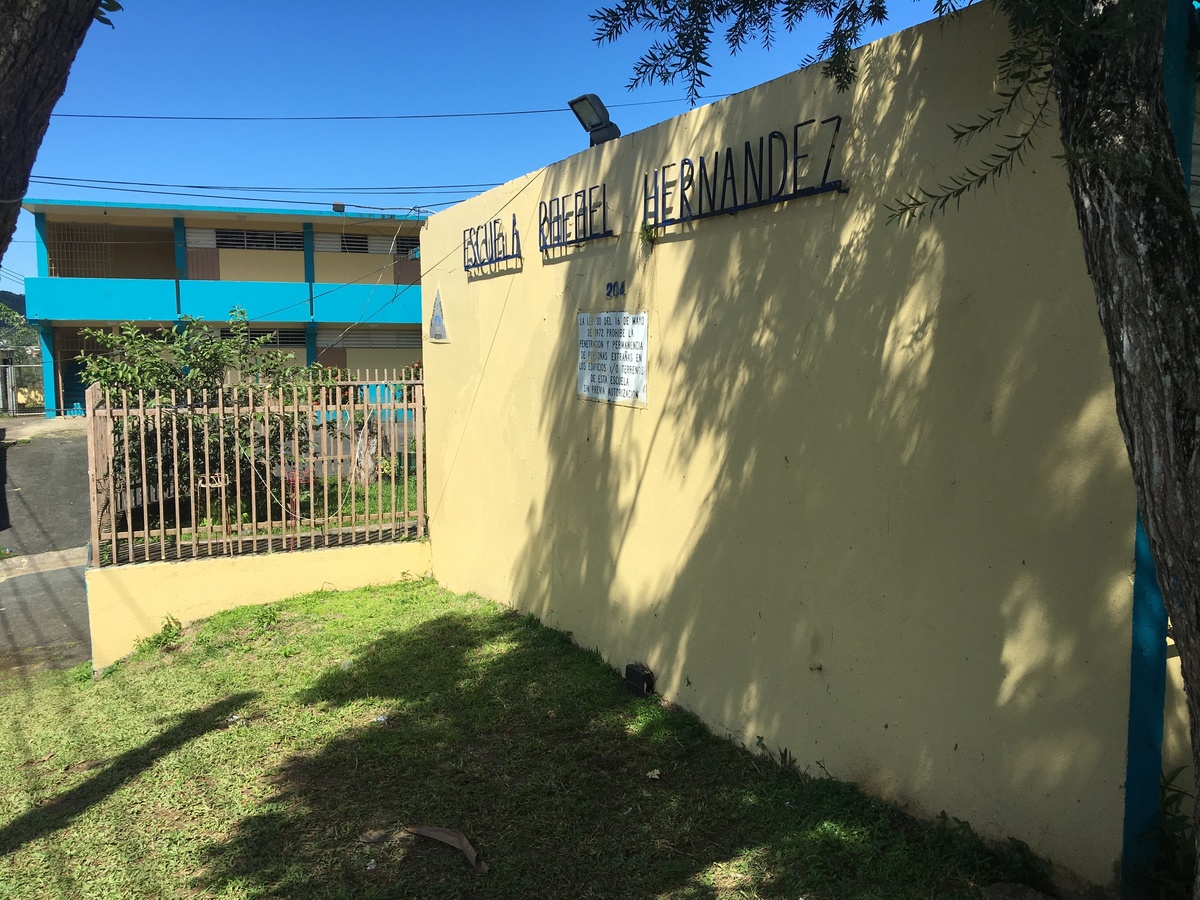 The Escuela Rafael Hernandez is a rural elementary and middle school in the mountains outside San Juan. Parents fear the dwindling enrollment, made worse by Hurricane Maria, will lead the government to close the school.

The fallout is being felt at schools across the island, like the Escuela Rafael Hernandez. It's an elementary and middle school in Guaraguao, a rural mountain community within the municipality of Guaynabo. Student enrollment has been declining for years, and Hurricane Maria decimated it further.

Mariliana Sanchez, the leader of a parents' group at the school, said that when the school finally re-opened two months after Hurricane Maria, only about 60 of 150 students came back.

"Many families left for the United States because we didn't have water or power. We still don't have power," Sanchez said. Other families, tired of waiting for the school to re-open, enrolled their children elsewhere. The dwindling enrollment, Sanchez said, led to the transfer of two of the school's teachers.

And while Sanchez said students are slowly returning, it may be too late. This month the education secretary plans to release a list of 300 schools she'll close in a move to consolidate the 1,100-campus system. Sanchez and other parents fear their school will be on the list.

"This school is so necessary," Sanchez said. "We don't have schools in the mountains, in the countryside. Not everyone can take their kids to schools in the city."

Under the proposed reform, an entity like a non-profit organization, a university, or a municipality would, with the government's approval, be allowed to open its own school or try to take over an existing one like Escuela Rafael Hernandez. It would then get funding based on the number of students it enrolled. It could make its own hiring and salary decisions, adopt a specialized curriculum, and require students to meet minimum standards in order to stay at the school.

Secretary Keleher says this kind of flexibility will allow charter schools to innovate and provide students better options in a school system that has fewer and fewer. That's the sole reason she is pursuing charter schools, she said, and not for financial savings despite her need to find those too amid the Puerto Rican government's ongoing fiscal crisis.

She has noted, however, that charters could also help money flow to the island's education system, thanks to the Trump administration's desire to see the expansion of charter school programs. The White House's proposed 2019 budget, Keleher recently tweeted, grants "priority and FUNDS to initiatives that give students more OPTIONS."

"That's the context within which they're presenting their proposal," said Roamé Torres Gonzalez, dean of the School of Education at the University of Puerto Rico. "Their interest in securing federal funds amid the island's fiscal crisis is evident.

Torres said Puerto Rico regularly gets far more of its education budget from the federal government than any U.S. state. Last year, it was 37 percent.

But union leaders say private entities would stand to benefit from the move to charters while traditional schools would be disadvantaged academically and financially. They would not have the same flexibility as charter schools but would be held to the same evaluation standards. As they lose more students to charter schools, they say, their own funding allocations would be reduced, possibly triggering another provision in the reform bill requiring schools that can't cover their costs to close.

Rather than treat public education as something to invest in, said Aida Diaz of the Puerto Rico Teachers' Association, the proposed bill treats schools "as a collection of goods and services to be consumed."

Critics are drawing comparisons Gov. Rosselló's attempt to revamp the education system to New Orleans. After Hurricane Katrina wrecked Louisiana's most populous city in 2005, officials saw an opportunity to revamp the school system, which was rife with corruption. The result: all but five schools are charter.

The proposal has support from Puerto Rico's legislature, which is controlled by the governor's party. But union leaders say they will continue their campaign to defeat it.

Erin B. Logan contributed to this report.