Accessibility links
Deep, Compassionate 'Tess Of The Road' Contains A Whole World Rachel Hartman follows up Seraphina and Shadow Scale with the story of Tess, a rebellious young woman who runs away to escape being sent to a nunnery, and finds pain and growth along her road.

Deep, Compassionate 'Tess Of The Road' Contains A Whole World

Deep, Compassionate 'Tess Of The Road' Contains A Whole World 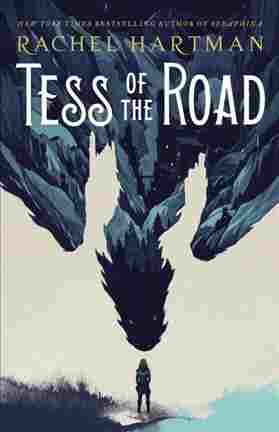 Tess of the Road

I've been wary of Tess of the Road for some time. The ad copy —"You fell in love with Seraphina. Now meet Tess."— made me grumpy. I did, in fact, fall in love with Seraphina, the protagonist of Seraphina and Shadow Scale, two of the most beautiful fantasy novels I've ever read; I resented the implication that I'd therefore love Seraphina's sister Tess. I loved the world in which both lived, certainly, but I also know how companion books usually work, affording only teasing glimpses of the characters to whom my loyalty is pledged, familiar bait leading me into the trap of the new.

I was wrong. Tess of the Road is astonishing and perfect. It's the most compassionate book I've read since George Eliot's Middlemarch, and I do love it, and Tess, fully as much as its predecessors.

Tess Dombegh and her fraternal twin, Jeanne, live in Lavondaville, in the nation of Goredd, ruled by Queen Glisselda — a world recently upended by the revelation that the powerful Saints humans had worshipped for generations were in fact human-dragon hybrids, one of whom, Saint Jannoula, waged war against dragons and humans alike. But while their older half-sister, Seraphina, was very much at the centre of those world-shaping events, Tess and Jeanne are at the periphery: Abused by a strict and bitter mother, slipping in social status as their father's stripped of his license to practice law, their prospects lie entirely in good, moneyed marriages.

'Tess of the Road' is astonishing and perfect. It's the most compassionate book I've read since George Eliot's 'Middlemarch.'

Unfortunately, where Jeanne is quiet and dutiful, Tess is prone to trouble — she's always dreamed of adventure and exploration, teaches herself to understand the language of the quigutl (smaller, more marginalized cousins to dragons), and chafes against her mother's requirements. She works hard to do what's wanted of her, but after one disgrace too many, she runs away from her family, and tumbles headlong into her childhood quigutl friend's quest to find a mythic creature called the World Serpent.

I struggle to relate this story's particulars when all I want is to celebrate the whole it makes without diminishing the experience of coming to it fresh. Tess does not strike out in search of adventure — she's a deeply wounded young woman struggling to survive the wreck of her life. Her time on the road is a sustained project in outgrowing the painful, intimate traumas that have defined her up until this point — her mother's vicious, careless cruelties; her father's indifferent neglect; the tangled knot of self-sacrifice she makes with her twin. And yet this is very nearly a book without a villain; the work Tess does on the road is as much about understanding the people who've harmed her as it is about understanding herself.

And of course, alongside the tremendous depth of character is the richness of Hartman's world, full of different approaches to gender, sexuality, faith, and language. This is as much a book about the quigutl's language and culture as it is about Tess, providing the contexts and metaphors for her growth. Indeed, Hartman never establishes a monument without examining the shadow it casts, never creates a thing without pondering what it obscures. In Shadow Scale, she did this with societies; with Tess, she does it with relationships, with the stories we tell ourselves about ourselves. The farther Tess travels, the deeper she delves into herself, and the more shocking a relief is her healing. Seraphina's story is epic in scale, but Tess' story contains the whole world.

There's a physical therapy technique called dry needling, that involves stimulating weak or over-tight muscles by wiggling a needle into them, creating micro-tears that prompt the muscles to twitch, release their tension, and extend to their full length, allowing the work of slowly strengthening those muscles with gentle exercise to begin. Every step Tess takes on her road is a needle pricking the clenched parts of her heart into relief; as I read I felt those needles in my own heart, embroidering it with awe.