Accessibility links
A Sister Shares 'Horrible And Wonderful' Memories Of Her Brother's Life And Death Comedy writer and TV producer Harris Wittels died of an overdose in 2015; a new book by his sister Stephanie Wittels Wachs came from her desperate need to talk to him, even yell at him after he died. 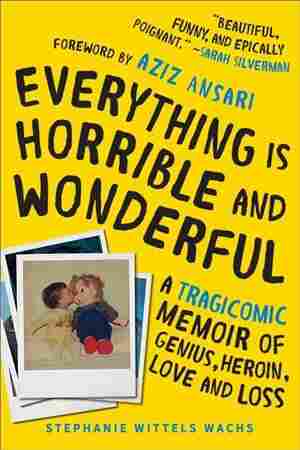 Everything Is Horrible and Wonderful

A Tragicomic Memoir of Genius, Heroin, Love, and Loss

Title
Everything Is Horrible and Wonderful
Subtitle
A Tragicomic Memoir of Genius, Heroin, Love, and Loss
Author
Stephanie Wittels Wachs

Writer Stephanie Wittels Wachs got a phone call from her loving and accomplished brother Harris just three days before her wedding, in which he shared some surprising news.

What was it? "He told me he was a drug addict," Wachs says. He died two years later, of an overdose. Harris Wittels was a hilarious and respected Hollywood comic writer, who had become co-executive producer of NBC's Parks and Recreation by the time he was 30, and worked on award-winning shows like Master of None.

Everything Is Horrible and Wonderful is Wachs' memoir of his life, her loss, and the lessons to be shared. "It poured out of me, in a sort of way that I can only describe as exorcising demons," she says. "I was consumed with every possible negative emotion you could be consumed with. It was a terrible place to be, and I desperately wanted to talk to him."

On what happened to her brother

I think that's part of why I wrote the book. In the book, I call it a manic investigative phase — after something terribly senseless happens, the people who are left here are tasked with making sense of it. I think he had a propensity for excess. He was pleasure-driven, as a person. He wanted to have everything in the buffet line, not just one thing. I also think that he had a mind that never stopped working. He was constantly crafting jokes, and making observations of the world, as a comic does, and I think that was probably exhausting ... and he needed to relax and shut down. So I think the combination of those is why we're here.

On his rehab attempts

I can tell you that since he's died, I have just really done nothing but think about, and process, and write about, and honor my brother. I've been very verb-like since he died. I guess I think it's both. I think I'll always be his sister.

On how her mother and father are coping

When a child dies, it does a number on the family. Parents don't expect to bury their children. I think for our family, because we had this basis of laughter and fun, and, you know, we were a strange family who likes each other, genuinely, it's been really difficult. A lot of our attention is now on grief. My mom is very active in her grief. She is speaking in high schools, she's created a support group in Houston for other families who've lost family members to overdoses. My dad is 100 percent on the opposite side of the spectrum — he is very sort of solitary in his grief, and I think it's harder for him. I think when you are not able to talk about it and express how it feels, it eats you up ... it's like every family, you keep going, you know?