Accessibility links
'A Place Of Darkness' Is An Illuminating History Of Horror Kendall R. Phillips' new look at early American horror movies is academic, sure — but its central arguments make for great reading about how shifting cultural currents shape what scares us on screen.

'A Place Of Darkness' Is An Illuminating History Of Horror

'A Place Of Darkness' Is An Illuminating History Of Horror 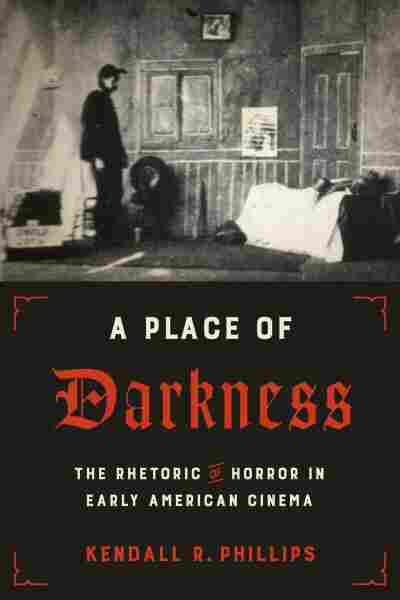 A Place of Darkness

The Rhetoric of Horror in Early American Cinema

"Ghosts? Are you kidding me? I'm an American."

The camera is an instrument of suspense. Given a movie frame, you want to understand what's happening in it — and what will happen next. That balance of wonder and dread is a fundamental draw of film, and a touchstone of the horror genre. The questions Kendall R. Phillips asks in A Place of Darkness: The Rhetoric of Horror in Early American Cinema are: How did we get from the nickelodeon special-effects "cinema of attractions" to understanding horror narratives as their own genre? And what does America's relationship with horror tell us about the idea of being American in the first place?

The answers — when they're possible — are illuminating. Film is a telling lens for cultural history, whether you're turning The Room into a Twitter meme or combing through silent films for an academic book about how the horror movie was born. (Who knew that "Uncle Josh," the yokel hero of Edison shorts about the supernatural, nightmarish, or uncanny, is a candidate for the first-ever horror franchise?)

A Place of Darkness is about as academic as they come; expect discussion of the "paradigm of monstration" and the ways weird films "provided a counternarrative to the emerging American rationalist epistemology." But the book's central arguments make for great reading, as Phillips lays out the ways that proto-horror movies contained distinct and disparate rhythms (suspense, surprise, superstition), how the need for legitimacy led to literary adaptation as a horror standard, how movies developed alongside audiences to bring new immediacy to onscreen dread, and how shifting visions of the Other forced movies to constantly renegotiate what, exactly, people were meant to be afraid of.

Film is a telling lens for cultural history, whether you're turning 'The Room' into a Twitter meme or combing through silent films for an academic book about how the horror movie was born.

Phillips draws these elements together under the idea of horror as an exploration of cultural fears within 'acceptable' parameters. When "the pressure to create a homogeneous American culture necessitated securing the popular American movie screen for the purpose of indoctrinating immigrants," the past was an old world fraught with terrors, and the present was a new one full of uncertainty. "Both on the screen and in the discussions surrounding early screen practice, a line of demarcation was drawn between the incredulous, civilized, white American male and the superstitious, uncivilized, gendered, and racialized Other." (Though this book ends with Dracula and Frankenstein, there's a straight line to the cultural conversations modern films are having with their own genre histories — look no further than Get Out for a horror movie that tackles this dynamic head-on and radically redraws that line of demarcation.)

It's always eye-opening to compare which aspects of film discourse shift and which are evergreen. Moral panic is eternal; including "fears that immigrants, along with the working class and children, would be led astray by the fanciful images and stories depicted in moving pictures." Definitions of descriptors like "gruesome" became a marketing and censorship battleground — with violence and dark concepts equally likely offenders. And it's hard not to enjoy a film pundit's verdict in December 1932: "All that can be done in the way of horror pictures has now definitely been done."

As with many academic texts, this effort to frame a new argument means the book only scrapes the surface of some of its most interesting suggestions. We're duly warned that Phillips intended "an exercise in rhetorical criticism, in that its focus has been on the way these horrific elements were depicted, discussed, and contested," but that question of American identity and the shifting Other is compelling enough to overwhelm some of the rhetorical specifics. (Several early thrillers that use inheritances, wagers, and other greed as the motive for crime and terror are listed in order to slot them into the 'melodrama' aspect of emerging horror. But was this merely a reason to fill a house with false ghosts? Was there some deeper American unease about money and the wealthy in the late 1920s that spurred so many successful movies in which the unscrupulous rich made life miserable for others? Perhaps the book's designed to prompt such questions from the reader; if there's one thing an academic text will tell you, there's always room for more research.)

We're all intrigued by a story that suggests something isn't quite right. The thing that cemented the horror movie in film culture was the addition of a story to the scare — giving us something to dread. Phillips suggests the thing that cemented the horror movie in American culture was that it offered a chance to experience large cultural fears in a tidy way. With Get Out on the Best Picture ballot this year, it's clear that the right story can still terrify us; A Place of Darkness is a primer on how the movies learned to do it.