Accessibility links
Two Brits Achieve Artistic Balance In 'Valerie's Head' Author David Gaffney and illustrator Dan Berry bring just the right amount of nuttiness to their new graphic novel, about a woman who keeps the memories of disappointing exes in a cellar in her mind. 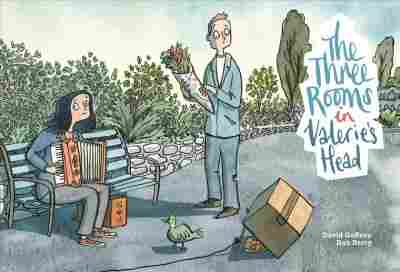 The Three Rooms in Valerie's Head

by David Gaffney and Dan Berry

It's a match made not in heaven, but the cellar: David Gaffney's tale of lonely Valerie, who preserves the memories of her disappointing exes in a cellar in her mind, would intrigue any illustrator. But it's hard to imagine one better suited to Gaffney's sensibility than fellow Britisher Dan Berry. Their graphic novel The Three Rooms in Valerie's Head is lightly balanced between writer and artist, each the right amount of crazy.

Gaffney is known in the United Kingdom for his flash fiction. In such collections as Sawn-Off Tales, Aromabingo and The Half-Life of Songs he's spun dozens of three- or four-paragraph stories that manage to convey the protagonist's central conflict, deliver some action and, at their best, confound the reader's expectations. It's no small task to wring so much out of what is, essentially, a gimmick, but Gaffney manages it thanks to his robust and off-kilter imagination. His short tales almost always act like riddles, sending the reader back to the beginning to figure out what makes the characters behave that way.

It's simply perfect that, out of all the cartoonists Gaffney could have teamed up with for this longer work, he settled on Berry. The latter, after all, once drew a 24-page comic in 24 hours. Both of these men are exhilarated, not intimidated, by the exigencies of form, and their confidence lends vigor to a book that could have seemed pointless. The Three Rooms in Valerie's Head is that most fragile and daring artistic edifice: a folly. It doesn't plumb its heroine's soul or provide catharsis. It simply observes Valerie and the men she dates, and what it observes just happens to be snortingly funny.

'The Three Rooms in Valerie's Head' is that most fragile and daring artistic edifice: a folly.

Valerie's an accordion player with a problem familiar to any modern single girl: Every time she meets a nice guy, there's something wrong with him. Take Brett. He doesn't respond well when Valerie hurls a vase of flowers at him. "You can discover everything about your boyfriend by tossing a breakable object towards him," Valerie believes. "Is he comfortable with spontaneity? What is his attitude toward risk, debt, transgression, sin, guilt?... Is he concerned with the existential? You learn the most if the object belongs to someone else."

Then there's Jake. He shares Valerie's passion for brutalist buildings and Mahler's second symphony, but he also invents a prescription-glass windshield for his car so he can drive without wearing corrective lenses. Unfortunately, that means Valerie has to stick her head out the side window to keep from getting sick. (On the other hand, "it had the ... advantage that car thieves couldn't drive the vehicle unless they happened to have the same degree of myopia.")

Follies are hard to pull off, especially fictional ones. You've got to make the reader forget that the scenario they're laughing at is preposterous because you made it that way. Remarkably, this book's oddities usually feel unforced — thanks in large part to Berry. Where Gaffney goes big, Berry is low-key and wry. He depicts Gaffney's wildest flights with straight-faced sangfroid; his modest compositions and pleasant watercolors provide a sense of gravity. The characters are certainly expressive – particularly when the teenage Valerie shreds on her accordion – but Berry achieves his best comic effects by simply varying the shapes of their eyes.

It's when Berry departs from his straight-man role that the book teeters. When one ex-boyfriend describes his scheme to catch pigeons and hurl them into a neon sign whose glare keeps him up at night, Berry scrawls him in thick red and yellow crayon. The crude drawings seem to reproach Gaffney for including such an unfunny episode. For a few pages the delicate balance is in danger, but then the book settles back on point. The other characters' eccentricities are screwball, not sociopathic. Valerie may not be a heroine to carry close to your heart, but she and her boyfriends — sorry, ex-boyfriends — are the perfect fodder for a folly.