Accessibility links
Chinese Classic 'Condor Heroes' Takes Wing In English Jin Yong's wildly popular historical series Legends of the Condor Heroes has been adapted many times for Chinese TV, movies and comics, and now the first volume has been translated into English. 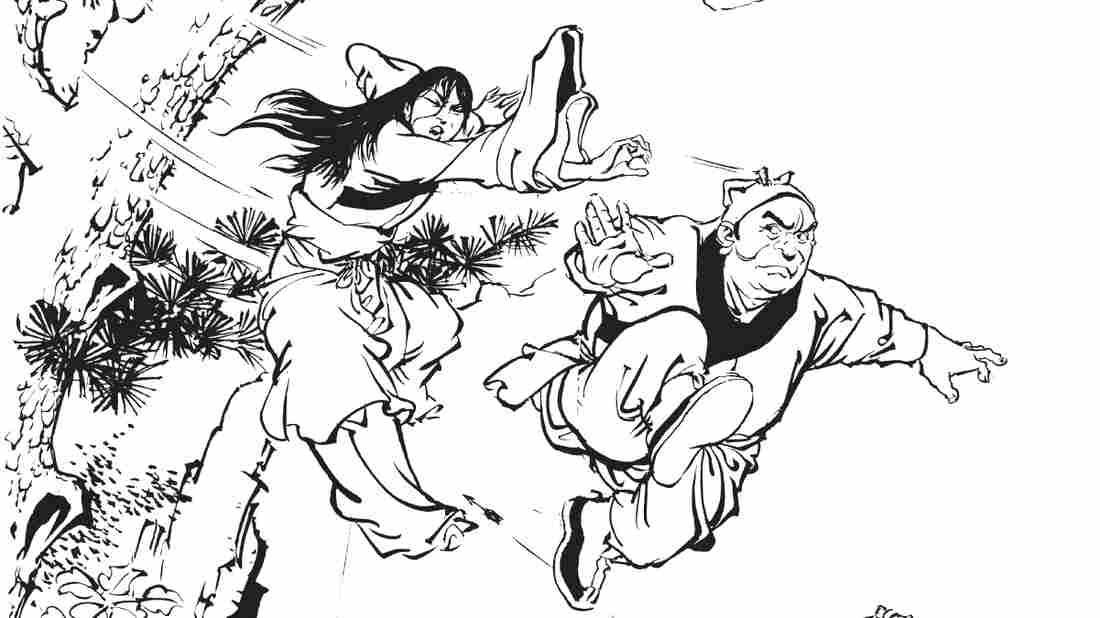 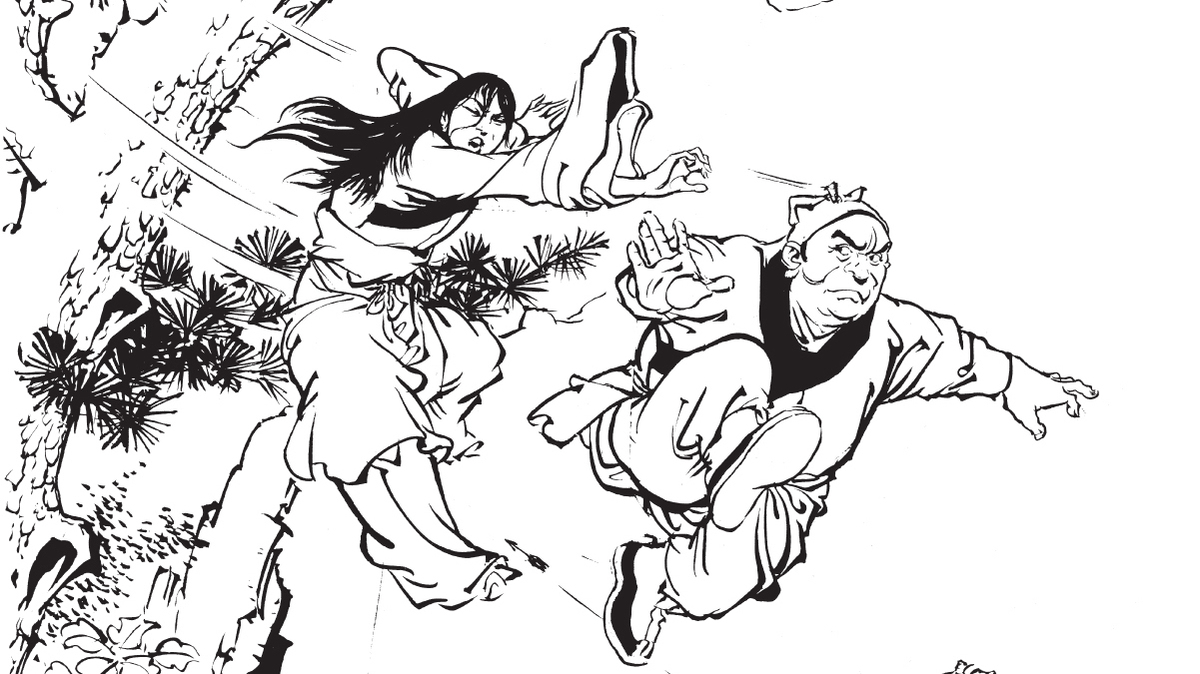 Legend of the Condor Heroes features the kind of high-flying martial arts many Western audiences were introduced to by the movie Crouching Tiger, Hidden Dragon.

In 2000, the film Crouching Tiger, Hidden Dragon introduced moviegoers worldwide to superhuman martial artists who could deliver a beatdown while balancing on bamboo or gliding across water.

But those kinds of acrobatics were no surprise to Chinese audiences. 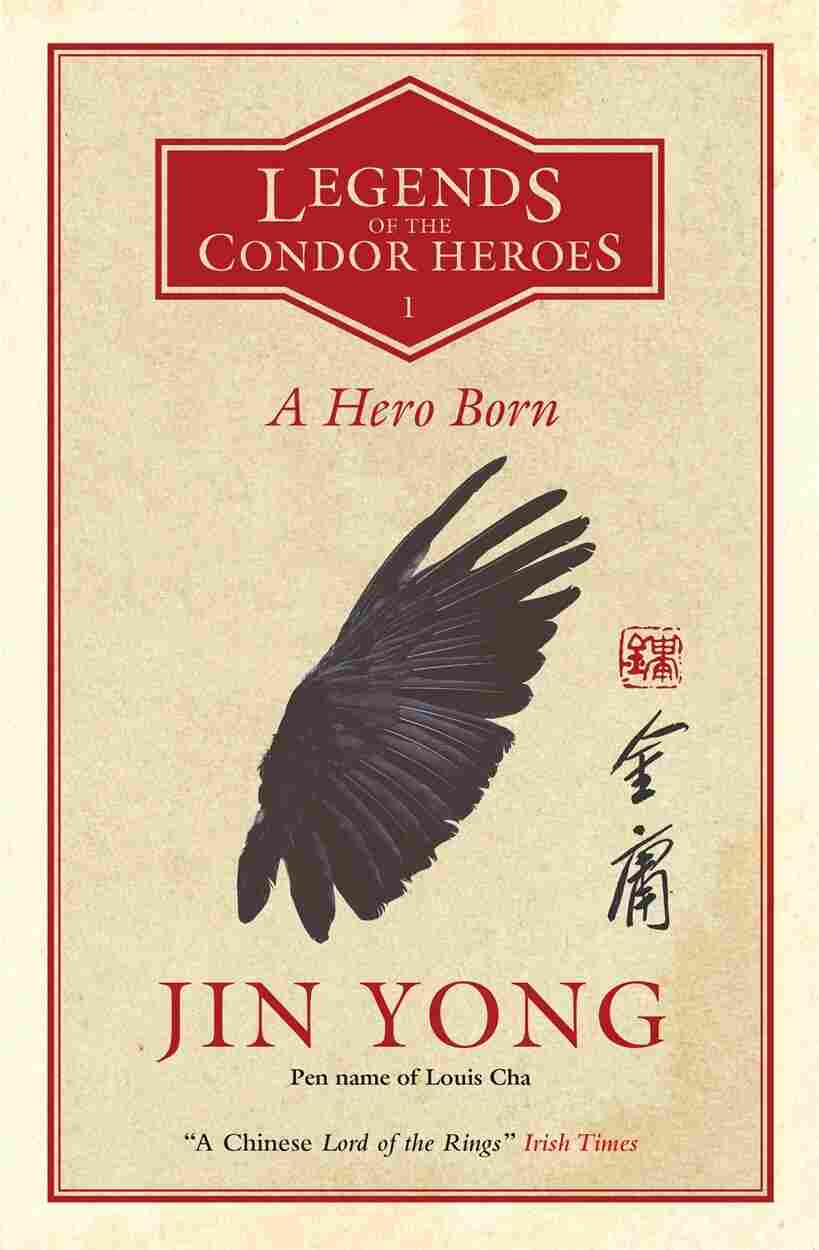 by Jin Yong and Anna Holmwood

In an early chapter of the popular Chinese novel Legends of the Condor Heroes, several characters in a tavern drink wine from a bronze cauldron that weighs more than 200 pounds ... by tossing it to each other. One person catches the cauldron with one hand; another holds out a walking stick with one hand and balances it like he's spinning a plate, tipping the stick slightly to send a stream of wine to his mouth; yet another jumps up and sips the wine from the cauldron in mid-air.

Condor Heroes tells the story of Guo Jing, born in medieval China. Northern invaders have defeated the Chinese Empire, and some of them killed Guo's father. His mother flees to the north, where Guo grows up with Genghis Khan's Mongols and learns martial arts from several masters to avenge his father's death. The series mixes prose and poetry, fantasy, history, and martial arts. It features a wide cast of characters, some of whom can do things like pierce skulls with their fingers and paralyze opponents by touching precise acupressure points.

"I couldn't stop reading," says Hong Kong lawyer Ricky Li Kin-yeung, who says he first encountered Condor Heroes when he was 11. "I read it during lessons at school ... under the table. I read it on my bed, I covered up my head and the book in the quilt, and turned on the torch ... afraid of being caught by my mum," a common experience among Condor Heroes fans. Now 28, Kin-yeung says he's read the book four or five times. 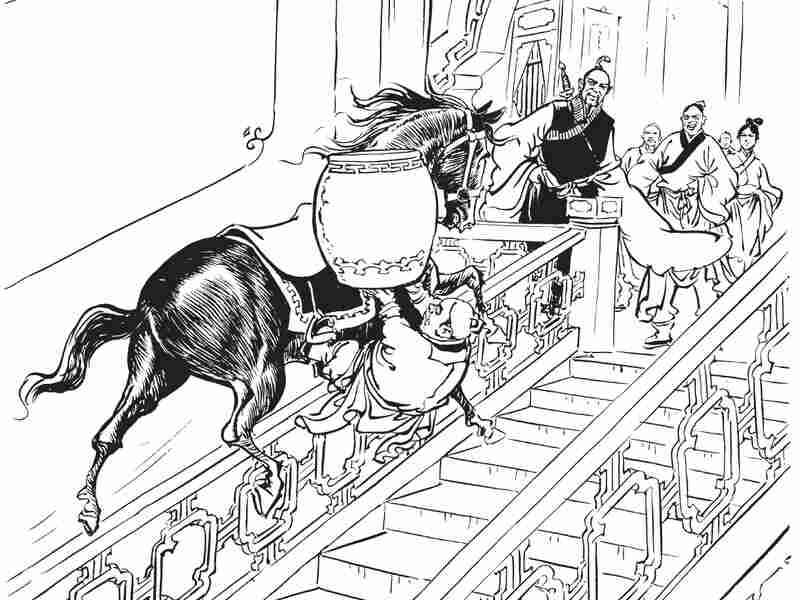 Oh, nothing, just getting a drink from a 200-lb wine cauldron. As you do. Jiang Yun Xing /Quercus Books hide caption 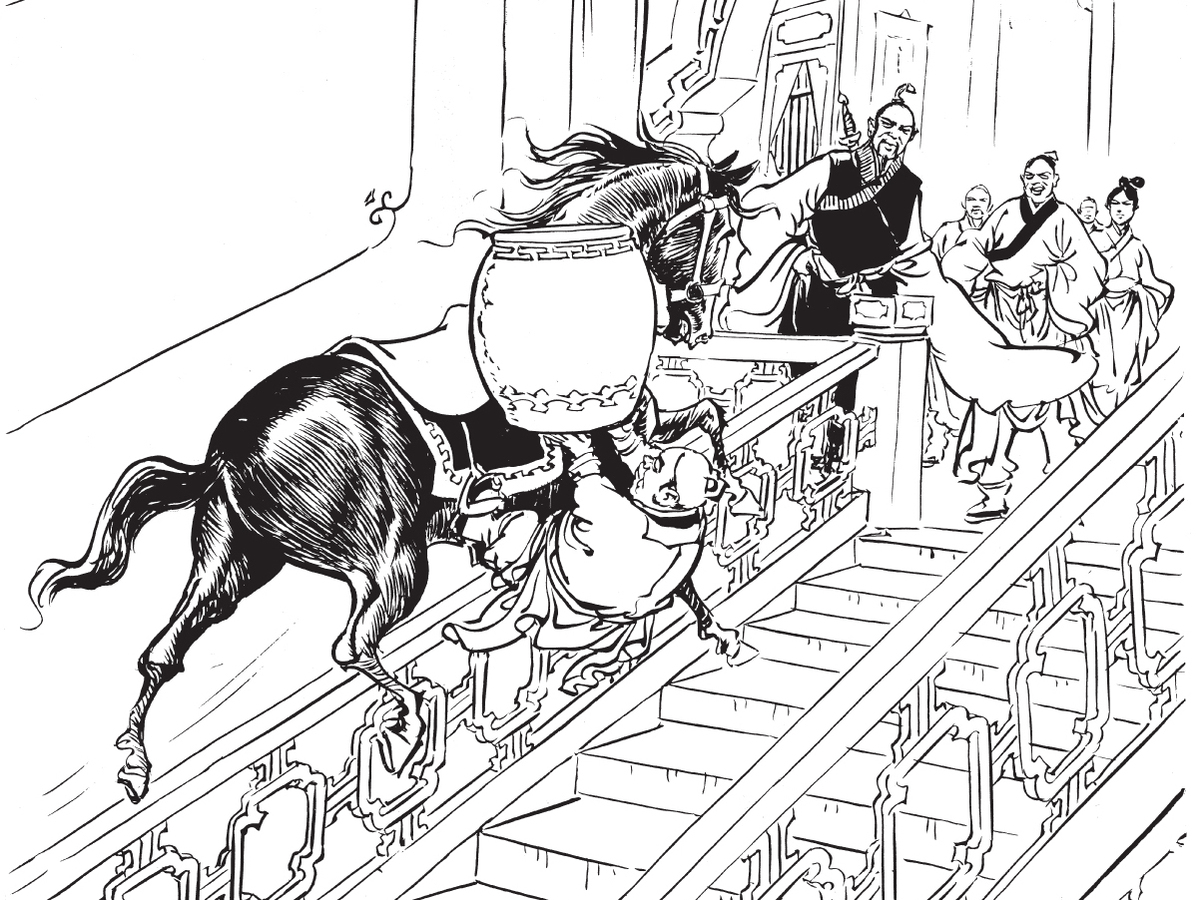 Oh, nothing, just getting a drink from a 200-lb wine cauldron. As you do.

And now readers everywhere will get a chance to share that experience; Legends of the Condor Heroes — the first in a four-book series — has just been translated into English. And while it may be new to readers in the West, it's actually one of the most famous works by author Louis Cha (commonly known as Jin Yong), a Hong Kong writer beloved across the Chinese-speaking world.

Jin Yong's books have been made into comic books, TV shows, movies, and video games — in fact, the latest TV adaptation of Condor Heroes came out in China, Hong Kong, Malaysia, and Singapore last year. Now in his 90s, he no longer gives interviews, but I found no shortage of people who wanted to talk about his work.

"It's difficult to overestimate (Jin Yong's) cultural influence," says Boston University professor Petrus Liu. "He turns novels into an encyclopedia of Chinese history, medicine, geography, philosophy, mathematics ... Nobody ever does that." Liu adds that he considers Jin Yong "the most important author of modern Chinese literature because he is the only (one) who writes in a narrative tradition that is truly Chinese."

Jin Yong's works have an emotional richness that seems inexhaustible.

That narrative tradition focuses on linked chapter fiction, something like the novels-in-stories that are so popular on American bookshelves right now. The chapters are linked, but they also stand alone as stories — and that means the novel doesn't just follow the life of one protagonist; it has many characters and side stories, and almost never has a first-person narrative voice. Liu says this structure is often like an oral performance or a Buddhist sermon: Each chapter starts with an elegant couplet, and ends on a cliffhanger for the next one.

While it might be easy to describe Condor Heroes as China's answer to Lord of the Rings or A Song of Ice and Fire, Liu compares Jin Yong's popularity and relevance to Jane Austen: "Only six novels to work with, but the movies never quit coming." And he says Jin Yong — like Austen — is renowned for his social observations and insight into human nature, which is why so many people adapt his work. "Jin Yong's works have an emotional richness that seems inexhaustible," Liu says.

Another part of Jin Yong's appeal is the elegant names, steeped in Chinese culture and history, that he gives to his characters and their martial arts moves. Condor Heroes translator Anna Holmwood notes in her introduction to the book that "many have considered Jin Yong's world too foreign, too Chinese, for an English-speaking readership. Impossible to translate."

But Holmwood tells me the difficulty was part of the fun. For example, two characters who mastered that skull-piercing martial arts move are named after different types of wind. They're scary, and they fight their opponents in the dark. Their Chinese names capture that atmosphere, so she says she had a great time going through the thesaurus to find different words for gales and storms; she ultimately named them Hurricane Chen and Cyclone Mei.

'Grandmaster' Ziyi Zhang: 'I Can Do Better Than Just Kicking Ass'

But will that elegance, that richness, really translate? "They've tried this before ... in comics, on the internet, and there's just no good way to really capture how cool the language is," says Lokman Tsui, an assistant professor at the Chinese University of Hong Kong. "It just sounds kind of dorky." And he should know — Tsui was named after a Jin Yong character, but he grew up in Amsterdam watching TV adaptations with his parents. He actually pursued China studies in college, because he was frustrated he couldn't read the original text.

Tsui says he's also afraid that some concepts won't make much sense to a western audience. He remembers watching Crouching Tiger, Hidden Dragon — which was adapted from a martial arts novel much like Jin Yong's work — in Belgium. When the characters started flying, "people started laughing ... and I'm like, 'dude, you're not supposed to laugh here, guys.'"

Petrus Liu, the Boston University professor, acknowledges that translating Jin Yong's work is very challenging, but it's not impossible. "Sometimes you find literary works that are more universal," he says. "For example, people always say this about Murakami: There's nothing Japanese about his novels, they are putatively set in Japan but really honestly they could happen anywhere at any time ... Jin Yong is probably the opposite. It's a very grounded kind of work; it seems to be something that only the Chinese can relate to."

But, he adds, just because something is emphatically Chinese doesn't mean people from other cultures won't get it. He says he's not Greek, but he still enjoys reading the Odyssey. "A lot of people actually want to read something that looks Chinese, feels Chinese, feels different or even exotic, as opposed to a Murakami, and Jin Yong's work would speak very well to such readers."

For this particular reader, Jin Yong brought me back in touch with my own roots. I grew up in Hong Kong, but always found western pop culture — things like the Harry Potter books, Star Wars movies, and X-Men cartoons — more appealing. I struggled to learn Chinese, and to find Chinese books that captured my imagination. But when I opened Condor Heroes for the first time, I found an adventure in my own culture — and I could not put it down.