Accessibility links
Sherman Alexie's Accusers Go On The Record: 'It Just Felt Very Wrong' Author Sherman Alexie issued a statement in his own defense last week after allegations of sexual harassment began to circulate online. Now, several of the women accusing him are speaking to NPR. 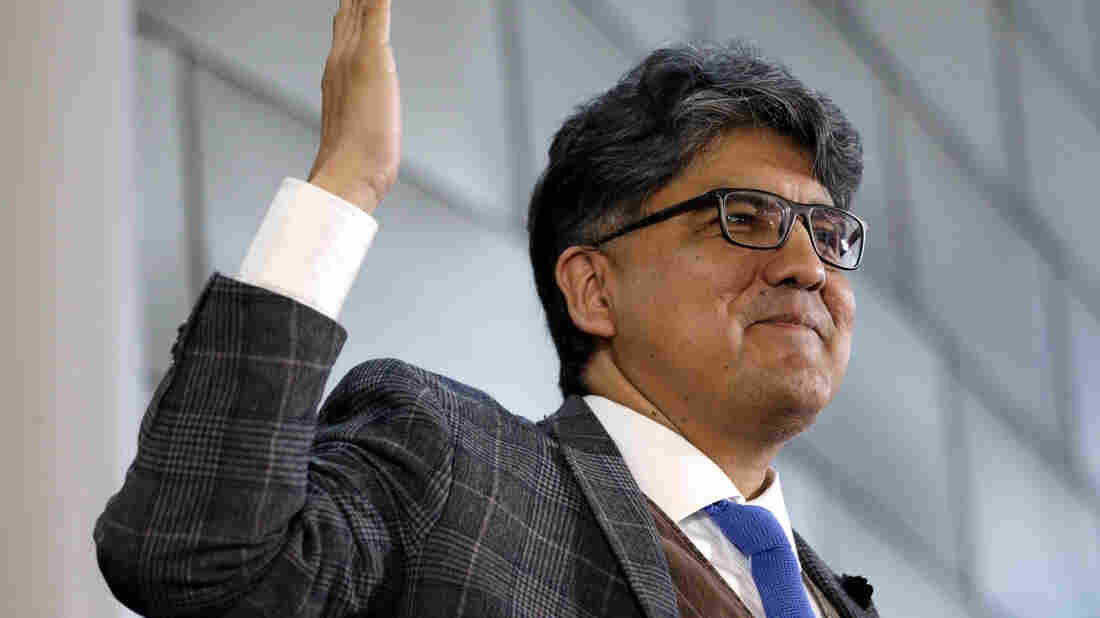 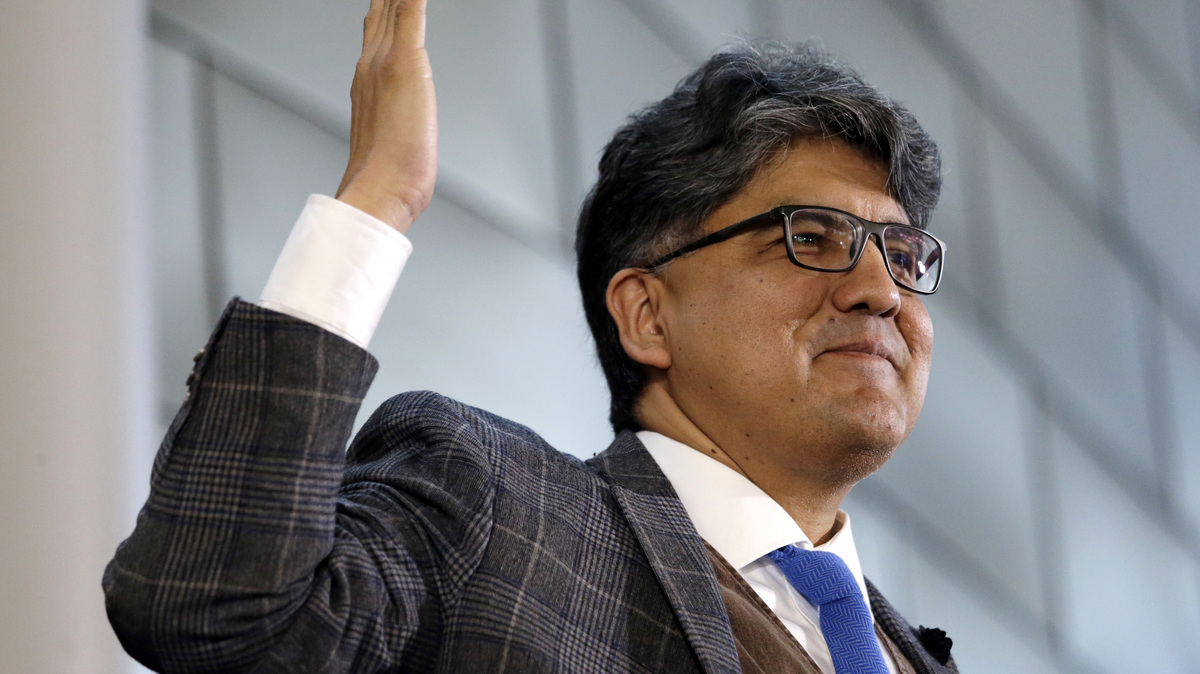 Sherman Alexie speaks at a celebration of Indigenous Peoples' Day at Seattle's City Hall in 2016.

Writer Sherman Alexie last week issued a statement admitting he "has harmed" others, after rumors and allegations began to circulate about sexual harassment. Without providing details, Alexie said "there are women telling the truth," and he apologized to the people he has hurt. Now, some of those women have come forward to speak to NPR about their experiences with him.

Alexie may not be a household name, but he is one of the country's best known Native American poets and writers, with a charismatic personality and a large following. He won the National Book Award in 2007 for his young adult novel The Absolutely True Diary of a Part Time Indian, and he wrote the screenplay for the film Smoke Signals, based on one of his stories. So the news about him has rocked the worlds of both Native American and children's literature.

If you are an aspiring author and you go to a reading of someone who is famous and beloved ... and he suddenly takes an interest in you and your work ... and then suddenly it turns out all he wanted to do is have sex with you. Those writers are left utterly devastated.

In those circles, "well, he's a rock star," says children's book author Anne Ursu. After the Harvey Weinstein sexual harassment story broke, Ursu decided to survey women in the children's book business to see if they had experienced such problems — just as many media companies, including NPR, have. Ursu's story, which she published in February on the website Medium, contributed to the whisper of sexual scandal that was already building around some well-known authors — including Alexie. Ursu says some of the most popular kids book writers used the power of their celebrity to seduce women.

"If you are an aspiring author," Ursu says, "and you go to a reading of someone who is famous and beloved and whose work you admire, and he suddenly takes an interest in you and your work, and he thinks you're special, and you start emailing, and he wants to mentor you — and then suddenly it turns out all he wanted to do is have sex with you. Those writers are left utterly devastated."

The rumors about Alexie were already growing louder when, about a week ago, Seattle-based writer Litsa Dremousis began tweeting about him, calling on women to share their stories. NPR — like other news organizations — reached out to her. She told us she'd had an affair with Alexie, but had remained friends with him until the stories about his sexual behavior surfaced. In his statement, Alexie denounced Dremousis. But before that, NPR began interviewing the women she referred to us.

"It's a story about power, and abuse of power," says Jeanine Walker, one of three women who came forward on the record, and whose stories NPR has corroborated with several sources. In all, 10 women spoke to NPR about Alexie, who is a married man. Most of the women wanted to remain anonymous, but a clear pattern emerged: The women reported behavior ranging from inappropriate comments both in private and in public, to flirting that veered suddenly into sexual territory, unwanted sexual advances and consensual sexual relations that ended abruptly. The women said Alexie had traded on his literary celebrity to lure them into uncomfortable sexual situations.

"Of course, I was really excited, I mean, Sherman Alexie, he's interested in my poems," Walker says. She's a poet and teacher who was managing a Writers in the Schools program in Seattle when she arranged to have Alexie visit a classroom. Afterward, Alexie said he had checked out her poetry online and asked her to send him a manuscript.

Alexie never got back to her on the poems, but they did become friendly. Walker says it was strictly platonic. One day, they met to play basketball at a court in his office building. Afterward, Walker went to change her clothes in a restroom in his office. "When I turned around he was right behind me, and just like physically very much in my space. And leaned toward me and said, 'Can I kiss you?' I said no and backed away, and he kept moving forward and was like, laughing and smiling and sweaty and whatever, and he said, 'It's just, we're playing basketball, you remind me of the girlfriends I had in high school.' And I just said, 'Well, we're not in high school, Sherman.' "

... if he had never expressed an interest in my poems I probably wouldn't have pursued spending any time with him. But he did express an interest. And so then when I discover that interest is actually physical, it just felt very wrong.

Alexie later apologized, and Walker says she stayed in touch with him for a while. She sent him her poems again, but never got anything but a quick comment and a promise of more to come. She says Alexie is a big deal in her hometown of Seattle.

"And he's connected to the organization I work for, and if he had never expressed an interest in my poems I probably wouldn't have pursued spending any time with him," Walker says. "But he did express an interest. And so then when I discover that interest is actually physical, it just felt very wrong."

Erika Wurth was a 22-year-old aspiring writer when she first met Alexie. As a Native American, he was a hero to her, and she hoped he might become a mentor. About a year after their first meeting, he suggested she come to one of his readings in Colorado. She went, and afterward walked back to his hotel with him. After chatting in the lobby, she started to leave, "and he jumps over the coffee table and begins trying to kiss me," she says. "And I went into a state of non-reality. I had almost no sexual experience, I couldn't believe it. And he's like, 'Come to my room.' "

Wurth did, and ended up on his bed. "He's kind of taking my clothes off and kissing me," she remembers. "And I'm kind of like stock still, trying to convince myself this is OK. It's not working, and eventually I say, because I am kind of scared of this situation, 'I'm a virgin.' But it got really weird, because then he's still trying to work me over, and I'm just stock still, and I think at that point, in my opinion, he realized that if he wanted to have sex with me he would have to violate me, he'd have to rape me. And he did stop."

I just was like, I don't ever want to be around this guy again. He's poisonous. He's not OK.

Wurth says she stayed in touch with Alexie, hoping he would still be her mentor — or at least apologize. Several years later, they had a second sexual encounter which also ended badly. Eventually, he did give her a positive quote for her first book, and a letter of recommendation — which she now thinks was to keep her quiet. Their relationship became contentious, and after a series of angry emails, Wurth decided to cut ties with him, disillusioned by the way he treated her. "Never admitting what he'd done, never apologizing. And I just was like, 'I don't ever want to be around this guy again. He's poisonous. He's not OK.' "

Alexie has enormous influence on the careers of Native American writers, and Wurth worries about what he may say about her to others in the business. So does Elissa Washuta. She met Alexie when she was getting ready to publish her first book, and she was hoping that he could help her with it. She went out one night with a group of people that included Alexie. She was chatting with him when, "seemingly apropos of nothing, Sherman told me that he could have sex with me if he wanted to," she says. "But he used a stronger word, beginning with F. You know, he had not said it quietly, he had not whispered it. It seemed that the men we were talking to could have heard it. I couldn't believe that somebody would say something to me like that. This older man who I didn't know, who was much more powerful than me."

Washuta says that although she was worried that the other men who were with them — all part of the local literary scene — had heard Alexie, she didn't have the nerve to say anything about it at the time. "I felt I really needed his approval and I needed his help in order to get this book off the ground," she says. "And so as uncomfortable as I was, I felt I could laugh off that comment in a way. But I still felt that he had so much power that I should probably not make a fuss about this."

I felt I really needed his approval and I needed his help in order to get this book off the ground.

Eventually, Washuta and Alexie became colleagues at the Institute of American Indian Arts. They got along, but she says that once, on a work trip to Santa Fe, he tried to lure her to his hotel room. Later, they had a disagreement over an essay of hers — Alexie implied she had plagiarized his work — and Washuta became fearful that he would ruin her career. When she got another job, she decided to cut her ties to the institute because Alexie was a powerful member of the faculty. "I think we did some really good work there. And I'm sure they continue to do really good work there. But I'm not a part of it. And that feels so lonely. I'm incredibly sad about it."

As the allegations against Alexie began to surface, the institute changed the name of its Sherman Alexie Scholarship to the M.F.A. Alumni Scholarship. Alexie has not responded to our multiple efforts to contact him. It is clear from his statement that he is angry at Litsa Dremousis, whose tweets prompted these women to come forward.

But if Alexie is angry, so are the women, which is why they're willing to talk. Their stories are complicated and messy, as much about the power they felt he had over them as they are about sex. And how to change that power dynamic may be where the conversation has to go from here.

Previous Web and radio versions of this story described an incident between Sherman Alexie and Elissa Washuta as having taken place in Chicago. It was actually Santa Fe, N.M.