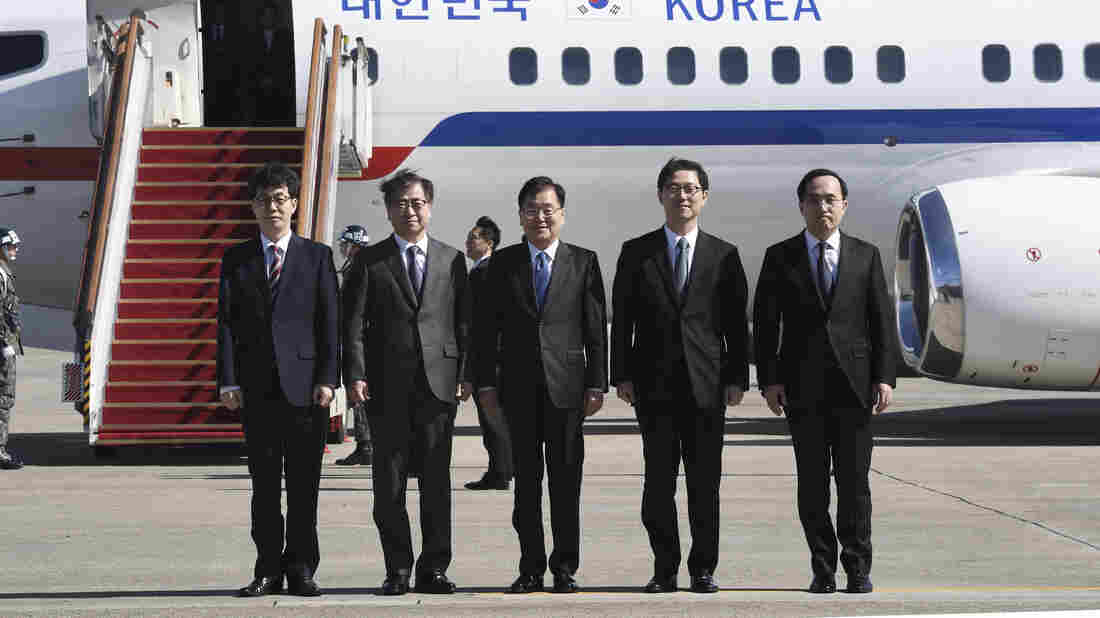 South Korea's national security director Chung Eui-yong, center, National Intelligence Service Chief Suh Hoon, second left, and others in the delegation pose before boarding an aircraft as they leave for Pyongyang at a military airport south of Seoul Monday.

North Korean leader Kim Jong Un hosted a dinner to welcome delegates from South Korea on Monday, in a visit Seoul hopes will pave the way for talks between North Korea and the United States.

The 10-member delegation includes a top national security adviser and spy chief — marking the first time South Korean officials are reported to have met the North Korean leader since he took power in 2011.

The trip is a reciprocation for the visit that North Korean officials, including the leader's younger sister Kim Yo Jong, made to the Winter Olympics last month.

The South Korean envoys flew a direct route from Seoul to Pyongyang by government plane. They'll stay for two days. The last South Korean delegation to go to North Korea was more than 10 years ago, in 2007, which helped create conditions for an inter-Korean summit later that year.

Following this week's visit, two of the envoys — the head of the National Security Office in South Korea and the intelligence chief — are expected to go to the United States to brief government officials. South Korean media say there will likely be a briefing for H.R. McMaster, President Trump's national security adviser.

Kim Yo Jong Fascinates, And Puzzles, In South Korea

While the envoys aim to discuss conditions for U.S.-North Korea dialogue, the Trump administration has said it doesn't want to have formal talks unless North Korea is willing to discuss giving up its nuclear weapons.

"Now we are talking and [North Korea], by the way, called up a couple of days ago. They said that 'we would like to talk.' And I said, 'So would we, but you have to denuke, you have to denuke,'" President Trump told attendees at the annual Gridiron Club dinner over the weekend.

Meanwhile, North Korea has said it wants to go to the table with the United States as equals, which means Pyongyang refuses to put up its nuclear weapons as a precondition to talks.

Where does that leave things? It's possible that the U.S. could soften its stance and say that North Korea agreeing to a moratorium, or freeze, in developing its weapons program would be enough to start a dialogue.

But if there isn't progress toward dialogue between the U.S. and North Korea, negotiations between the North's Kim and South Korean President Moon Jae-in remain possible.

Last month, Kim Yo Jong went to Seoul and extended her brother's invitation to Moon to come for a summit in Pyongyang.

Moon practically agreed to go, but said the conditions for that meeting to occur have to be detailed first. One of Moon's conditions is that North Korea make a more concerted effort to have dialogue with the United States.

It all points to progress in avoiding confrontation between the U.S. and North Korea, but time is tight.

Seoul and Washington are expected to restart their postponed annual military exercises in early April. North Korea despises these drills. It sees them as a rehearsal for invasion.

That means diplomats have about a monthlong window to get the two sides either to the table or on a path to it before the exercises — and the typical backlash from North Korea about the drills — start again in earnest.