Accessibility links
Florida's Long-Lost Wild Flamingos Were Hiding In Plain Sight Scientists thought Florida's native flamingo population had been hunted out of existence by the 19th century plume trade. A new study suggests the birds have been there all along. 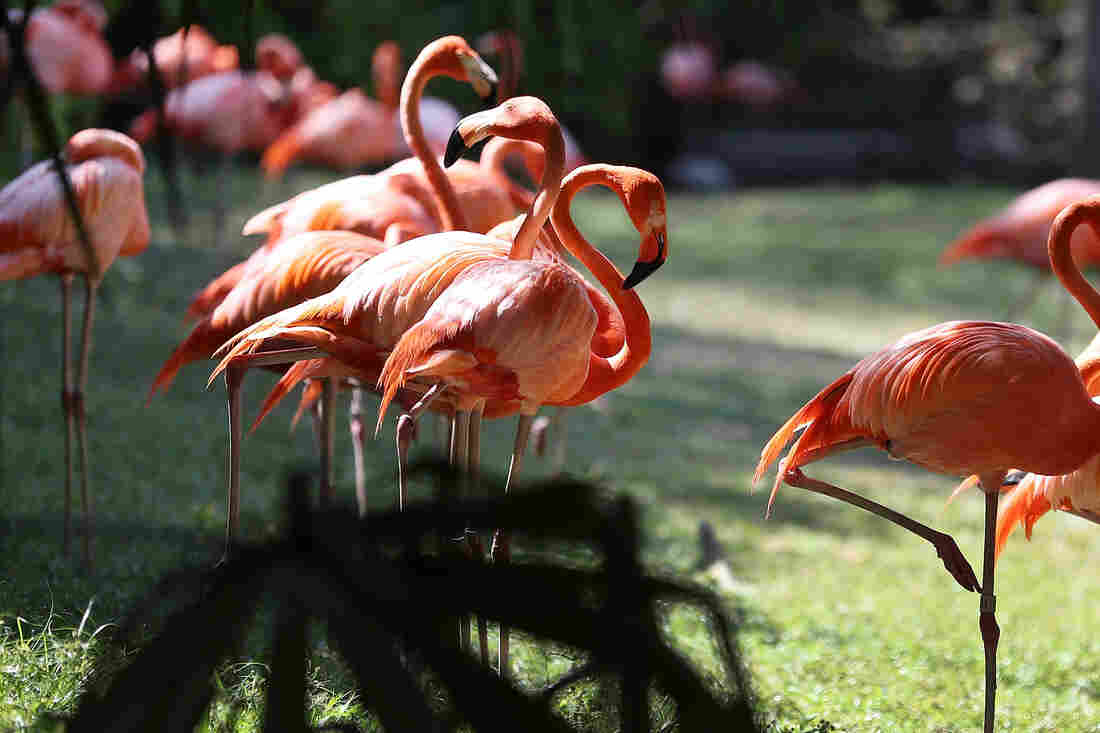 Flamingos at Jungle Island, a zoological theme park, in Miami in 2017. The long-legged pink birds were once common in Florida. But their striking feathers were prized decorations for ladies' hats, and they were thought to have been hunted out of existence for the plume trade in the 1800s. Joe Raedle/Getty Images hide caption 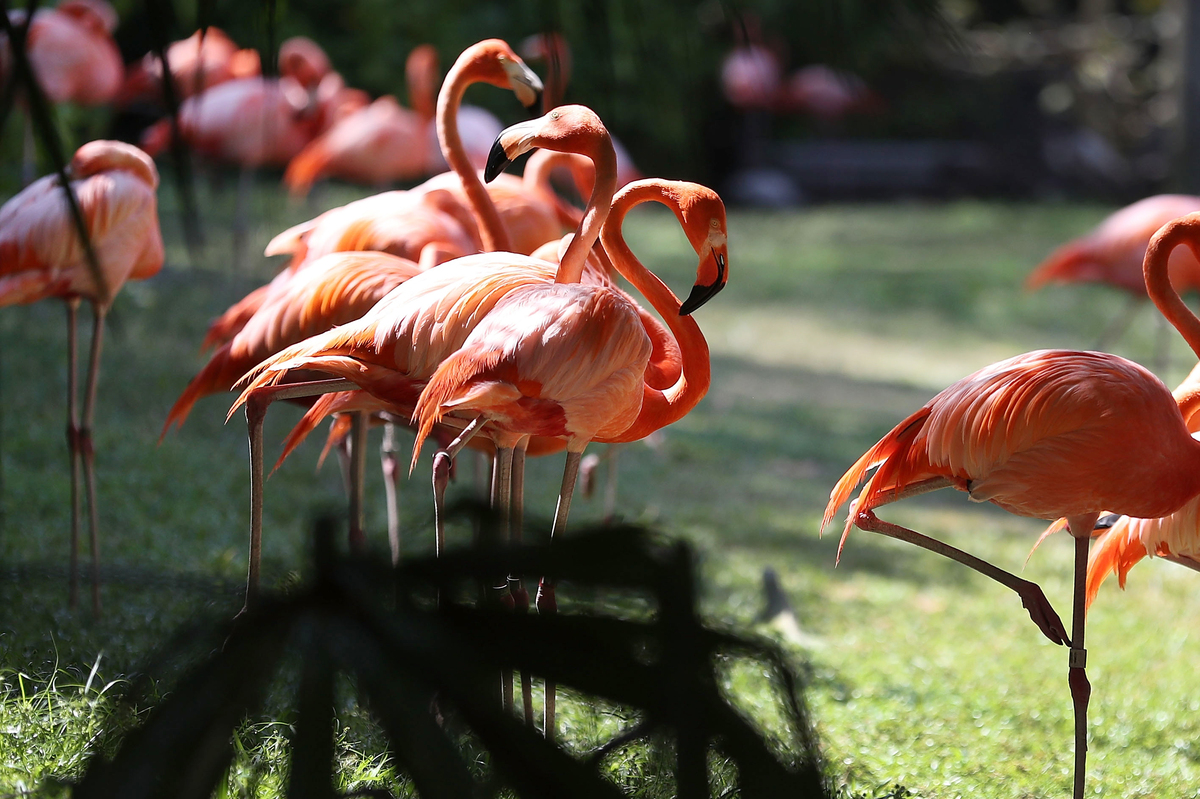 Flamingos at Jungle Island, a zoological theme park, in Miami in 2017. The long-legged pink birds were once common in Florida. But their striking feathers were prized decorations for ladies' hats, and they were thought to have been hunted out of existence for the plume trade in the 1800s.

Is there anything more Floridian than a flamingo?

The long-legged pink birds were once common in Florida. But their striking feathers were prized decorations for ladies' hats, and they were hunted out of existence for the plume trade in the 1800s.

At least, scientists thought the flamingos had been wiped out.

Now, a team of South Florida researchers is making the case that the conventional wisdom of almost a century is wrong. Florida in fact has flamingos — real birds, not the plastic kind.

"Those are not spoonbills"

Our story starts in July 2004. Pete Frezza, a researcher at Audubon of Florida, was out with a colleague doing some research in Mud Lake, an interior mangrove area in the Everglades where it is common to see egrets, herons and bright-pink roseate spoonbills.

The boat was running at idle speed through the shallow water.

"And just on the horizon was this huge line of pink," Frezza says. "And we were like, 'Oh my gosh. Those are not spoonbills. They're too big. Those are flamingos.' "

For decades, Florida's official position has been that flamingos may occasionally wander through from Mexico, Cuba or the Bahamas — but most of the birds spotted in the state are escapees from domestic flocks, like the famous one at the Hialeah Racetrack. That's what Frezza's colleagues at Audubon's Everglades Science Center told him about what he had seen.

"And I believed that until I started personally observing them and their behavior and then also observed the birds at Hialeah and started forming my own opinion that — no way. These were wild birds. They were in wild places, acting very wild," Frezza says.

And then there was Conchy.

A few years ago, a group of three flamingos showed up at the Navy airfield on Boca Chica Key, about 5 miles from Key West. Big birds like herons and egrets sometimes show up on the airfield, and the Navy scares them away with fireworks or shotgun blasts.

Otherwise, the bird could get sucked into the engine and crash a $70 million jet. (That would be bad news for the bird, too.)

Two of the visiting flamingos took the hint. But the third — the bird that eventually acquired the name Conchy — was stubborn.

"Conchy would not leave," says Steven Whitfield, a conservation biologist with Zoo Miami. "They couldn't harass him away."

That's when Whitfield's team stepped in. They had been looking for a flamingo to release with a satellite tracker. A flock of 147 flamingos had appeared in Palm Beach County in 2014 and raised questions: Where were these birds coming from? The researchers thought if they captured Conchy, he would lead them back to a flamingo population in Cuba, or somewhere else.

So Conchy was captured and banded. But there was a problem with the zoo's plan.

"The state told us that we couldn't release nonnative species," Whitfield says. "So that's when we started digging into the question of, are they really nonnative?"

Finally, the zoo got permission to release Conchy — there had been two sightings in the Everglades of flamingos with leg bands they got as chicks in Mexico, one in 2002 and one in 2012. That was enough to prove that at least some of the flamingos showing up here were not escapees.

Whitfield pulled together a team of people who research Florida's wading birds to ask the question: Does Florida have flamingos?

"When Steven brought us all together, the first words out of my mouth were, 'You know those are just escapees,' " Lorenz remembers. " 'Why are we even talking about this?' " 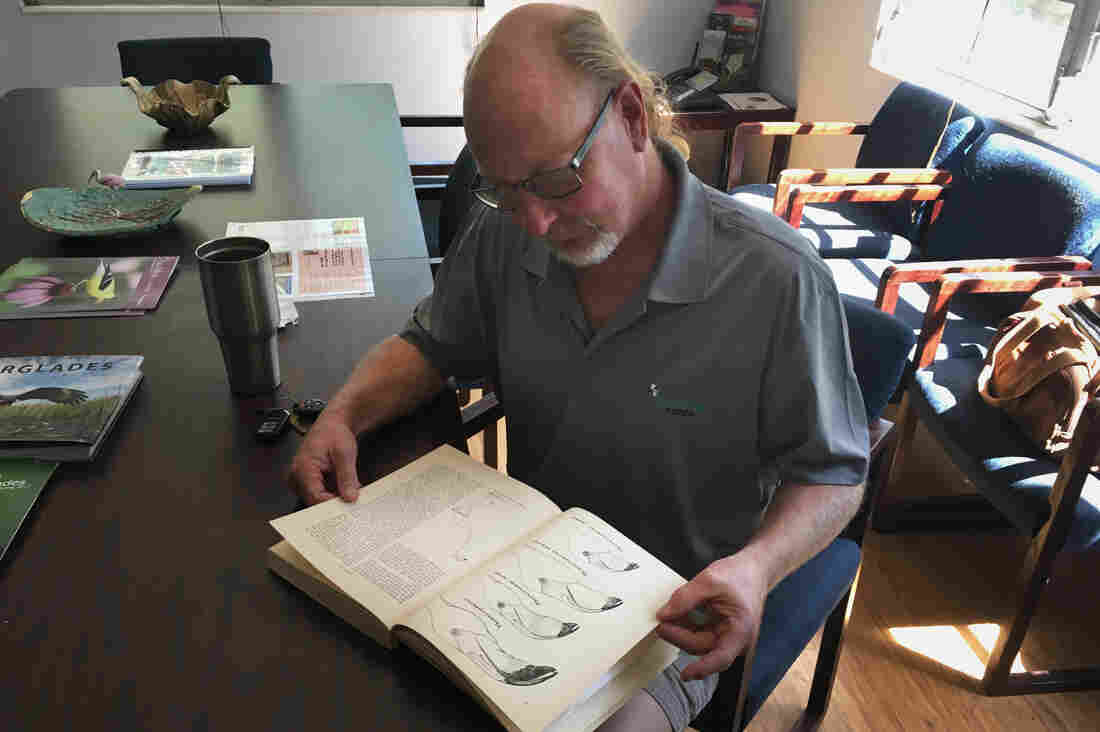 Jerry Lorenz, director of research for Audubon Florida, looks at the monograph on flamingos written by Robert Porter Allen, who established the science center in Tavernier. Nancy Klingener/WLRN hide caption 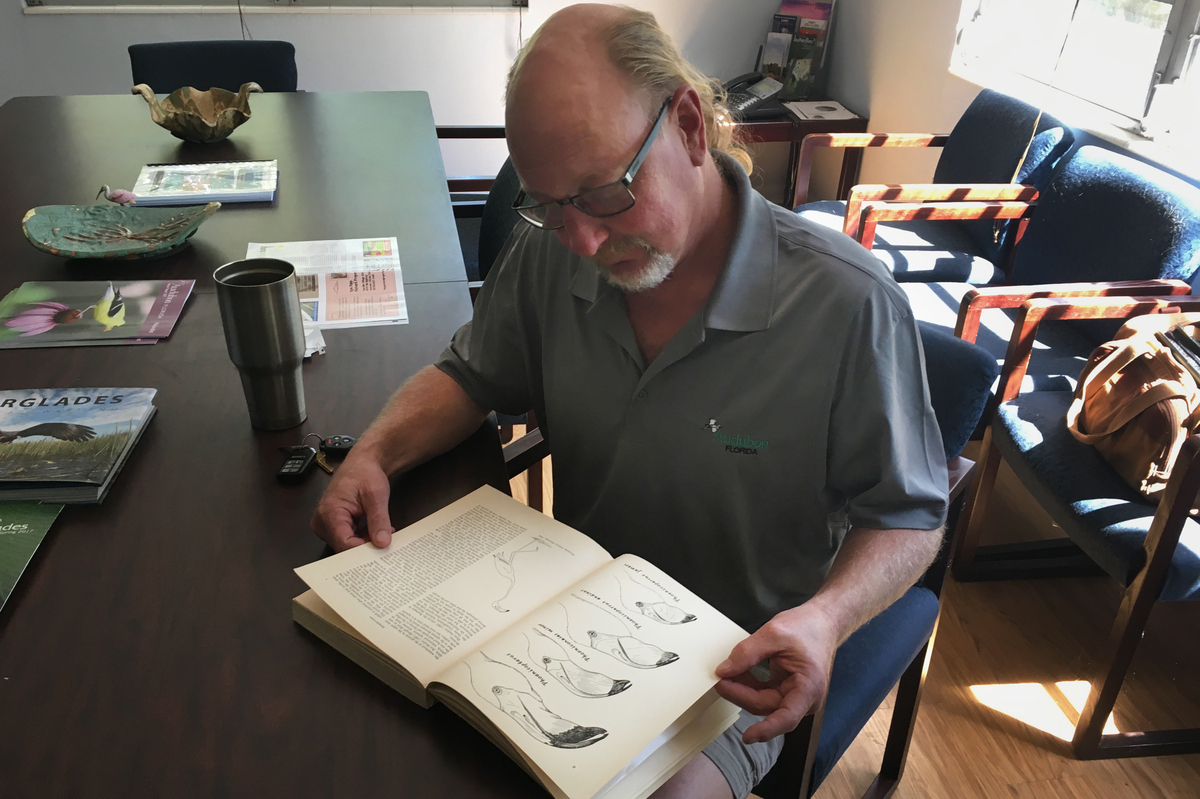 Jerry Lorenz, director of research for Audubon Florida, looks at the monograph on flamingos written by Robert Porter Allen, who established the science center in Tavernier.

The search for flamingos: back in time

The research team started its search for flamingos by looking for evidence of flamingos in Florida before the plume hunting trade took off in the late 19th century.

They found a lot of documentation: field notes from ornithologists, journals from hunters, even an account from John James Audubon himself, who wrote that seeing the birds "reached the height of all my expectations, for my voyage to the Floridas was undertaken in a great measure for the purpose of studying these lovely birds in their own beautiful islands."

The researchers also used 21st century databases and digitizing projects to look for 19th century museum specimens — not only of adult flamingos but also flamingo eggs, to find out whether the birds once nested in Florida. Whitfield found four eggs in museum collections that were labeled as having been collected in Florida.

"In the late 1800s, collecting wild bird eggs was a weird but somewhat popular hobby," Whitfield says. "I think it was kind of like Pokémon Go, but real."

The team's research demonstrated that flamingos were in Florida in big numbers in the 19th century.

And they had lots of data from a quiet cadre who had been documenting and sharing information for decades: birders. The number of reports, and the numbers of birds reported in each sighting, have been steadily increasing for years and really took off in this century.

But the big question remained: There are wild flamingos showing up in Florida now; where are they coming from?

Researchers hoped Conchy, the flamingo captured at the Navy base near Key West, would help them find the answer.

After the state gave the OK, the Zoo Miami researchers released Conchy, with a satellite transmitter attached to his leg.

"And what we expected was that Conchy was going to fly to the Bahamas, fly to Cuba, fly to the Yucatán in Mexico," Whitfield said. "He was going to tell us, finally, where the flamingos in Florida come from. In that, he was a failure."

Conchy, it turned out, was a homebody. The satellite tracker showed that he stayed in Florida Bay. He was occasionally spotted with other flamingos.

Scientists Pinpoint How A Flamingo Balances On One Leg

Frezza says Conchy has still contributed to knowledge about flamingos. "He proved that flamingos can live year-round in Florida Bay," Frezza said. "Florida Bay can sustain flamingos. On an annual basis. Which is pretty cool."

Conchy's satellite transmitter stopped working shortly after Hurricane Irma, but he has been spotted a couple of times since the storm. He stands out from the flock with his large blue tracking band marked U.S. 01 — because he is the first and only flamingo ever tagged in the U.S.

All that research added up to a conclusion that turned a century of conventional wisdom upside down: Florida's native flamingo population hadn't been wiped out after all. The flamingos birders had been seeing for years didn't come from Hialeah Racetrack.

The findings by Whitfield, Frezza, Lorenz and their colleagues was published in the journal The Condor last month. Soon afterward, the Florida Fish and Wildlife Conservation Commission removed the American flamingo from its website's listing of nonnative species.

He and the other researchers have solved the case of Florida's missing flamingos. The flamingos have been there all along. Hiding in plain, pink sight.