Accessibility links
5 Laws Of Political Gravity In Midterms. Do They Still Apply In The Age of Trump? The president implored his base voters to not get "complacent" in 2018, since the party in power usually loses big league in midterms. But Trump has already proven he can defy political gravity. 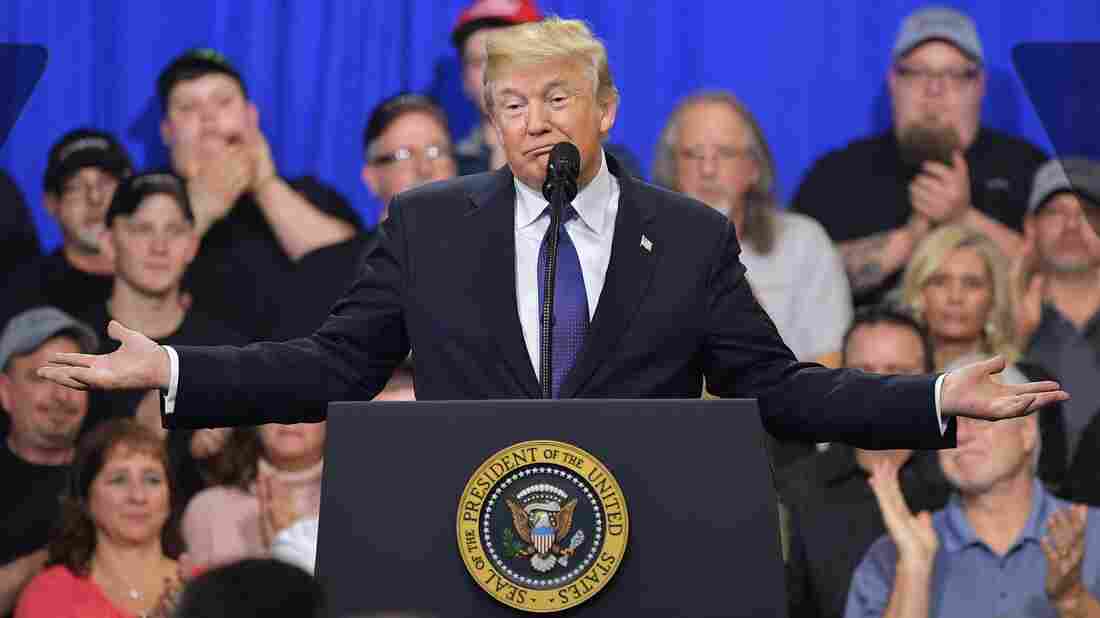 When he spoke last month at hydraulic cylinder manufacturer Sheffer Corp. in Blue Ash, Ohio, President Trump told the crowd "history is not on our side" in the 2018 midterms. Mandel Ngan/AFP/Getty Images hide caption 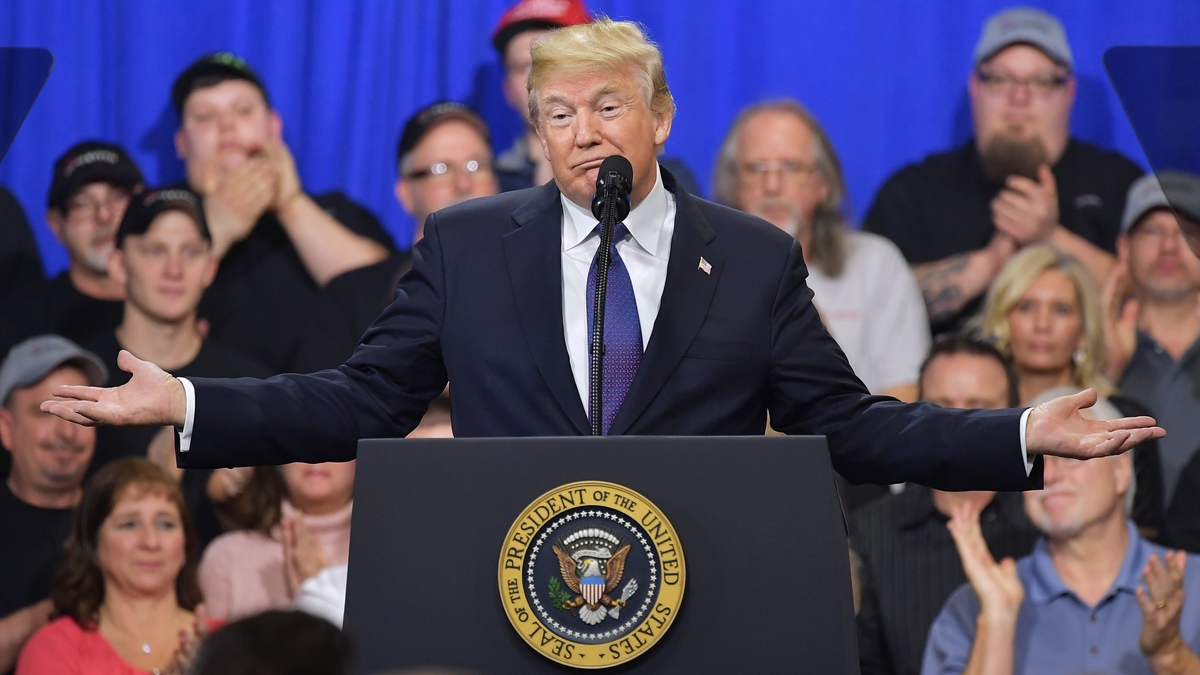 When he spoke last month at hydraulic cylinder manufacturer Sheffer Corp. in Blue Ash, Ohio, President Trump told the crowd "history is not on our side" in the 2018 midterms.

The 2018 election cycle has officially begun, with the first primaries being held in Texas on Tuesday.

In every campaign cycle, analysts look at the fundamentals — the political laws of gravity that, in the past, have influenced elections. In 2016, Donald Trump seemed to defy a lot of these laws, and Republicans are hoping they can do the same this year to prevent the hit that the party in power usually takes in a president's first midterm elections.

Here are five laws of political gravity to watch as the 2018 campaign plays out:

1. When a president's approval rating is below 50 percent, his party doesn't fare well at all

Since the Great Depression, when a president's approval rating is below 50 percent in his first midterm, his party has lost an average of 41 House and five Senate seats.

The Republican Party has a bad news trifecta here.

Since the Great Depression, when a president's approval rating has been below 50 percent in his first midterm, his party has lost an average of 41 House and five Senate seats.

Midterms are a referendum on the president and his party. Trump is still popular with his base, but because he is so historically unpopular with so many other voters, his ability to help his fellow Republicans is diminished. His "strongly disapprove" numbers have been consistently higher than his "strongly approve" numbers.

The latest tracking poll from Gallup showed that 39 percent of Americans approve of the job Trump is doing, while 55 percent disapprove. And his approval rating in the RealClearPolitics average is a similar 40 percent approve, 56 percent disapprove.

2. The party with the intensity and enthusiasm on its side wins

Democrats have it — and it's fueled by animus toward Trump, just like Republicans in 2010 and 2014 were motivated by antipathy to President Barack Obama. (Democrats lost a total of 76 House seats and 15 Senate seats in those two Obama-era midterms.)

In the handful of special elections since 2016, and in the Virginia and New Jersey 2017 elections, Democratic turnout has been up. There are hundreds of new Democratic candidates running in races where Democrats have failed to field a candidate in the past, and polls consistently show that Democrats are more interested and enthusiastic about the 2018 campaign than Republicans.

As The Washington Post noted Saturday, about 1,200 candidates had registered to run as Democrats for the House by the end of 2017 — a clear record for a single party and the first time since before the wave election of 2010 that Democrats outnumbered Republicans at the same point in an election cycle.

3. When people are in a bad mood, the party in power suffers

Voters' attitudes about the state of the country — Are we in a recession? Are we at war? — is always one of the most important factors.

Amy Walter, The Cook Political Report, on how Americans feel about President Trump

And this year, the measurement isn't working the way it usually does in at least one big respect. The direction of the country and a president's approval rating is typically tied to voters' views about the economy. But right now, the economy is doing pretty well — with Americans' attitudes about the economy reaching a 17-year high in a recent NBC News/Wall Street Journal poll — and increasing numbers of people are saying they like the GOP tax cuts.

So why isn't Trump more popular? In fact, he is suffering poor approval ratings with the very upper-middle-class, suburban voters who are probably benefiting the most from his tax cuts.

Amy Walter of The Cook Political Report said that it's as if voters are saying to the president, "Yeah, we feel good about the economy, but we don't really feel good about you."

There is a wild card on the economy — Trump's threatened tariffs and a possible trade war. On Monday, the president said that he didn't think there would be a trade war if he goes ahead with steep tariffs on imported steel and aluminum, but a few days earlier, he tweeted that "trade wars are good, and easy to win."

Republicans worry Trump's tariffs could undermine the stock market and economic growth — two factors they have been counting on to help them in November.

4. The party that has the structural advantages can sometimes mitigate damage

This is the bright spot for Republicans.

Even though many Democratic candidates have raised impressive amounts of money to stock their war chests, Republicans have a lot more outside money than Democrats do. The Koch brothers' network of conservative donors alone have pledged to spend a whopping $400 million electing Republicans this year, 60 percent more than they spent in the 2016 presidential election.

Many GOP congressional districts are also drawn to protect incumbents, and because Republicans control more state legislatures, they have overwhelmingly drawn those districts to advantage their party.

Republicans are hoping the mighty fortress of redistricting will help them defend against a big blue wave — if one materializes. They are trying to fight back against a state court ruling in Pennsylvania that redrew the state's congressional district and is likely to eat into the GOP's 13-5 statewide advantage in House seats. But challenges to maps drawn by Republicans in Wisconsin, Texas, Michigan and North Carolina are unlikely to impact the 2018 election.

5. The party that turns out their base usually wins

Who actually comes out to vote is an important factor in any election — and it's hard to predict. But it's especially true in midterms, when activists traditionally dominate. Consider: There is about a 30 percent drop-off in turnout from presidential to midterm years.

In 2016, Donald Trump surprised a lot of political handicappers when he got more rural, white, working-class voters to the polls than most turnout models predicted. And things are often favorable for the GOP in a midterm.

But there's one flaw in that profile for Republicans — highly educated voters generally do not like Trump. In fact, more than half of white college graduates have strongly disapproved of him. And, since 2016, they have been turning out for Democrats.

This will make it harder for Trump to help Republican candidates in the kind of suburban districts won by Democrat Hilary Clinton in 2016. The suburbs are precisely where Democrats are hoping to build their comeback. Clinton won 23 districts where a Republican was elected to the House in 2016. Democrats need to pick up a net of 24 seats to take back the House.

To make up for it, Trump needs to turn out big numbers of his white, non-college-educated supporters to the polls this year — just like he did when he defied the odds two years ago.

"Coalitions that are built in presidential elections don't always translate into midterm elections," Walter points out. "Just ask Democrats who were counting on the Obama coalition of 2008 to come out in 2010. They didn't."