Accessibility links
Texas Primary Results: Democrats Surge, But Progressive Backlash Looms In the first 2018 primaries, Democrats put up their best numbers in Texas since at least 2002. Republican totals were higher in the end, after lagging in early voting. 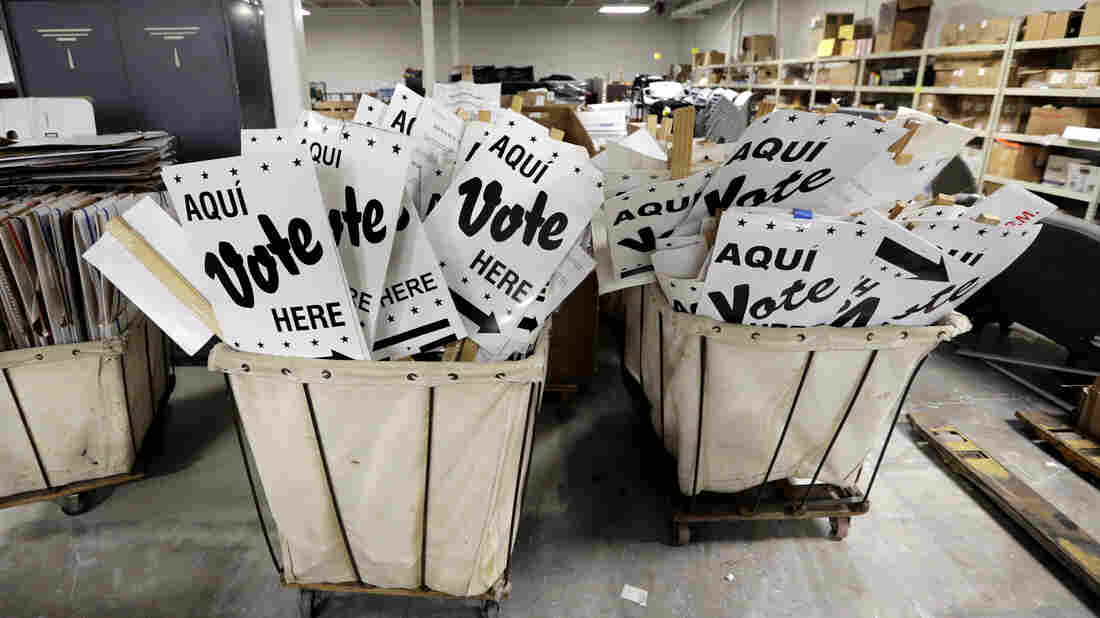 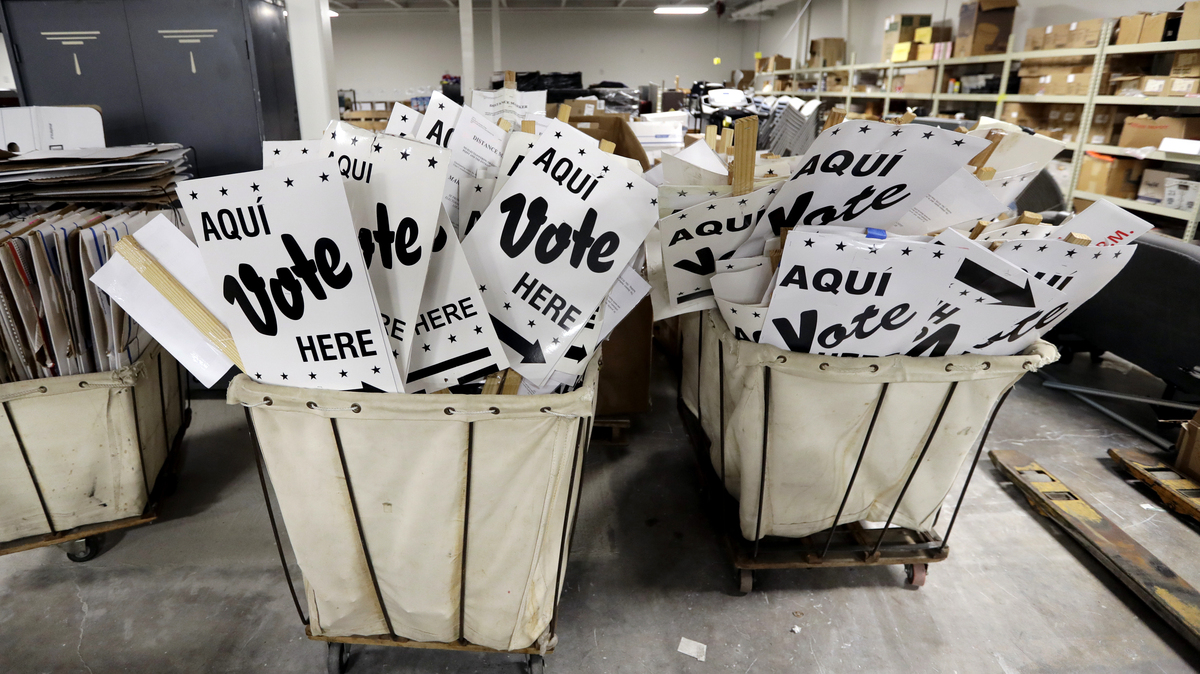 Bins of signs are seen in a storage area at the Bexar County Election offices last month in San Antonio.

Texans cast their votes in primaries Tuesday, the first contests of the 2018 election cycle. Democrats turned out in numbers not seen in more than a decade — with outcomes in various races bringing about both history and controversy — though far more Republican voters showed up at the polls across the deep red state.

Driven by anti-President Trump fervor, there were plenty of positive signs for a once-latent Democratic Party in Texas. Early vote turnout for the minority party over the past two weeks had surpassed GOP totals — and even bested their own 2016 numbers. Democrats fielded a record number of candidates in all 36 congressional districts, and there's the potential to flip maybe three or more seats come November.

By the early hours of Wednesday, Democratic vote totals neared 1 million, nearly doubling totals from 2014 and reaching a level not seen in a midterm primary for the party since 2002.

Republican vote totals exceeded 1.4 million, a modest increase from 2014, nearing a midterm record for the Texas GOP as well.

Tuesday's totals do not bring the end of the primaries in Texas, with several races headed for runoffs — including several Democratic races where the party establishment is being frustrated by progressives and political newcomers.

In a race in the Houston suburbs, national Democrats tried to push a progressive candidate out of the race. Now, the backlash to that move will make the runoff later this spring a high-profile skirmish within the party, in the type of vulnerable GOP district where Democrats are hoping to find their path to a House majority this November.

The state's U.S. Senate race is now set, with incumbent GOP Sen. Ted Cruz and Democratic Rep. Beto O'Rourke easily winning their primaries. Cruz still has the edge for re-election, but O'Rourke has been mounting a surprisingly strong campaign and gaining attention.

Cruz rallied about 85 percent of the Republican vote, while O'Rourke received just over 60 percent of the Democratic vote. A lesser known Democratic candidate, Sema Hernandez, surprised some Texas political observers by leading the front-runner in some border counties.

Cruz quickly released a radio ad attempting to define O'Rourke as too liberal for Texas -- in a country jingle. "Beto wants those open borders, and wants to take our guns," says one line.

While O'Rourke has been drawing crowds and small donors, recent polling shows that a plurality of Texans don't know much about him. Successful fundraising can help the Democrat define himself, but Cruz is wasting no time.

There are eight open House seats in Texas this year — six held by retiring Republicans and two by Democrats who also are retiring.

In both Democratic districts, candidates cleared the 50 percent threshold to avoid a runoff. Sylvia Garcia in the 29th Congressional District in Houston and Veronica Escobar in the 16th Congressional District in El Paso are poised to become the first Latinas to represent Texas in Congress. Escobar is running in the safe Democratic district to replace O'Rourke, as he runs for Senate.

The majority of the open seats will stay in the same party's hands. In nearly all of the GOP districts, nominees will not be known in those crowded races until May 22. In five of the six open Republican districts, no candidates were topping 50 percent to avoid a runoff in two months.

The same is true in what will be some of the most watched races this fall — Democratic challenges to GOP Reps. John Culberson, Pete Sessions and Will Hurd — in the three congressional districts held by Republicans but won by Hillary Clinton in 2016. Those Democratic primaries all appeared poised to go to runoffs on May 22 as well.

A political scion with a familiar name overcame a primary challenge on Tuesday — yet another George Bush, this one George P., son of none other than Jeb Bush, the former Florida governor and 2016 presidential candidate. Despite Jeb Bush's feuds with President Trump, Trump endorsed George P. Bush for re-election for land commissioner. The Associated Press projected that Bush would defeat a former land commissioner who wanted the job back.

Heat turns up on establishment Democrats

Enthusiasm on Democrats' side yielded a record number of 111 candidates, competing in all 36 congressional districts for the first time in 25 years. But that cuts another way — some of those crowded primaries turned particularly nasty in the final stretch, highlighting a Democratic divide between centrists and progressives. The outcomes of these primaries could have consequences for flipping crucial races come November.

There's possibly no more intriguing race to watch than the Democratic primary in the 7th District for the right to face Culberson, a Republican who represents the Houston suburbs.

The Democratic Congressional Campaign Committee caused controversy by wading into the race a little more than a week ago against progressive activist Laura Moser. The committee, responsible for trying to elect Democratic House members nationwide, cited derisive comments she had made about a more rural part of the state when she was a writer living in Washington, D.C.

That was before she moved home to run for Congress. (The committee also cited other controversial language she has used in her writing.) The DCCC's decision to use opposition research against Moser drew backlash from many progressive groups, and even Democratic National Committee Chairman Tom Perez said it was an action he wouldn't have taken.

The DCCC's maneuvers — the very embodiment of "the establishment" that many voters hate — may have had the opposite of the intended effect and appear to be propelling Moser into the May runoff, facing off against attorney Lizzie Pannill Fletcher, who is backed by EMILY's List. The DCCC would prefer Fletcher over Moser, thinking the chance to oust Culberson in a rapidly changing district might be lost if she is the candidate.

Because of the controversy over the DCCC's involvement, the May runoff will now become a focus of the split between establishment Democrats and the progressive wing of the party.

Other Democratic hopefuls to watch

The other two Clinton-won districts — Sessions' suburban Dallas 32nd District and Hurd's expansive 23rd District, which runs along the Mexican border from El Paso to San Antonio — both had primaries of note, too.

The Texas Tribune's Abby Livingston writes that in the 32nd District, it's former State Department official and ex-Clinton staffer Ed Meier who has raised the most money and was expected to secure a spot in the May runoff. He could be joined by Brett Shipp, a former journalist who has name recognition in the area; former Obama official Lillian Salerno; or former NFL player Colin Allred, who also served in the Department of Housing and Urban Development under Obama. With more than half the vote in, Allred had 40 percent of the vote. Shipp and Salerno were jockeying for the second-place slot to proceed to the May runoff against Allred.

In the five-way race to take on Hurd, former intelligence officer Gina Ortiz Jones appeared to secure a place in the runoff. Former Obama agriculture appointee Judy Canales and former high school teacher Rick Treviño, who has tried to seize the progressive mantle, were jockeying for the second runoff slot with about two-thirds of the vote in. Former federal prosecutor Jay Hulings, who had the backing of former Housing and Urban Development Secretary Julián Castro and his brother, Rep. Joaquin Castro, D-Texas, was running fourth.

The House seats open because of retirements are all likely to stay in their current party's hands, but there is some rising interest in the race to replace retiring Republican Rep. Lamar Smith in the San Antonio and Austin suburbs.

There was a massive 18-way primary happening in the 21st District, and if a far-right candidate wins the nod, Democrats are hopeful they can compete for it in the general election. They are encouraged by some generic-ballot polling.

For Republicans, former Ted Cruz chief of staff Chip Roy was leading the pack but will face a runoff.

On the Democratic side, tech entrepreneur Joseph Kopser was seen as the front-runner. He raised the most money and got the endorsement of House Minority Whip Steny Hoyer of Maryland. With nearly all the vote counted, however, Kopser was being edged out by political novice Mary Street Wilson, a pastor and former math instructor. They appear headed for a runoff in May.

The Associated Press projected that Bush won his primary, overcoming some resistance within the GOP, just over two years after his father, Jeb Bush, succumbed to the challenge from Trump. Bush celebrated the results with supporters — including his father.

The Last Bush Tries To Survive In The Party Of Trump

For the younger Bush, after winning election in 2014, the "realities of holding office began to sink in," Philpott writes. "There are questions about how well his office has handled Hurricane Harvey relief. He's also received bad press over his handling of the Alamo. You know, the one we're supposed to remember all the time. Those issues brought criticism from some in the party, and motivated Bush's predecessor, former land commissioner Jerry Patterson, to challenge him in the GOP primary. Patterson had left the office in 2014 in a failed attempt to run for lieutenant governor."

To help him this time around and, in the end, avoid a runoff with Patterson, Bush turned to the man who vanquished his father — and he got it. Last week the president tweeted his support, writing, "Texas LC George P. Bush backed me when it wasn't the politically correct thing to do, and I back him now."

A previous version of this story misspelled a reference to Jerry Patterson's last name as Paterson.